Read One for Sorrow Online 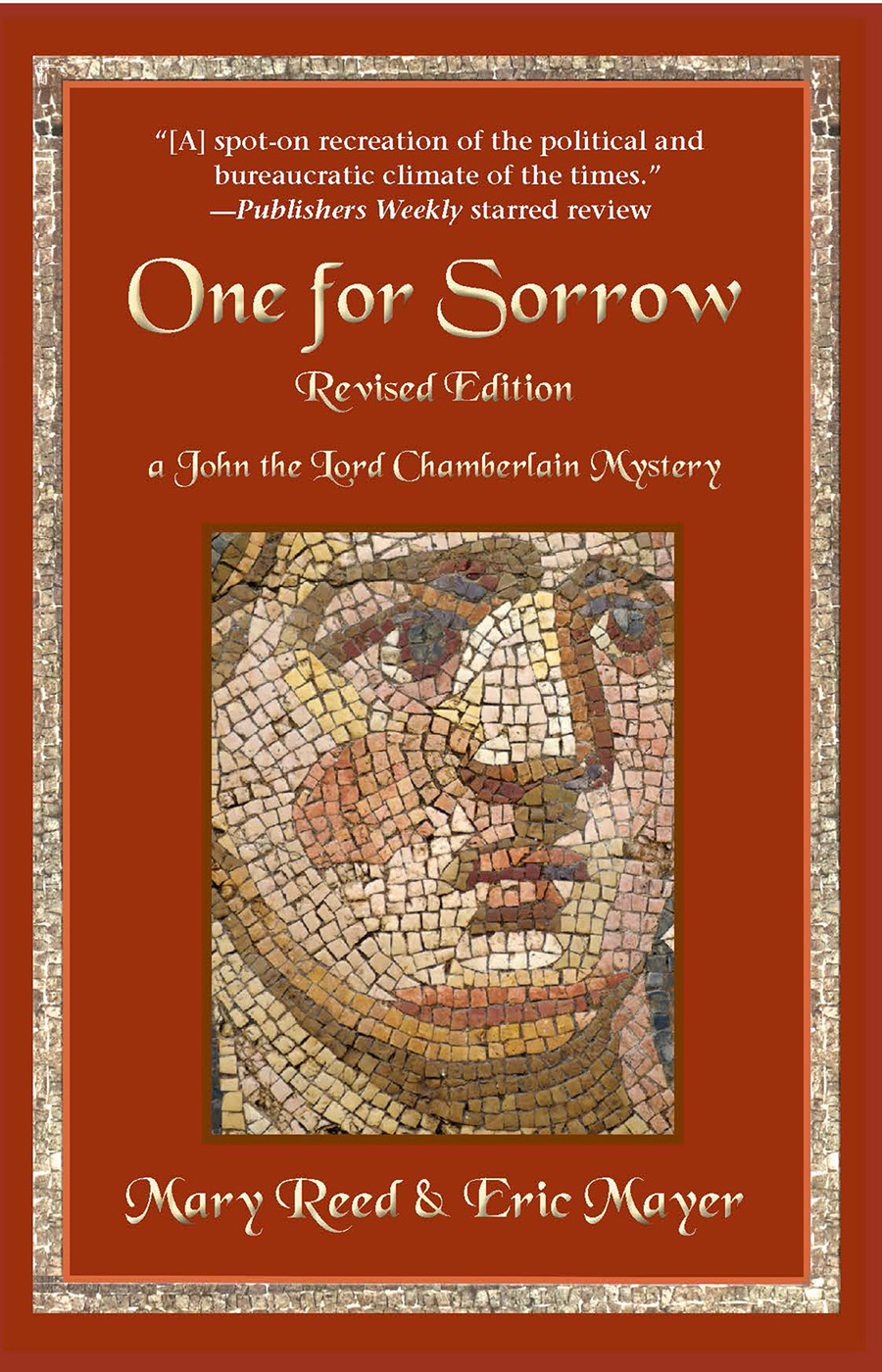 A John the Lord Chamberlain Mystery

Dedicated to Eric’s Grammy, who read
The Wind in the Willows
to him, and to all the Reedies

Our thanks to the following for their assistance: Sir Rodney Hartwell, Dr. Robert Cleve, Professor Robert Gurval, Dr. Robert Ousterhout, Samuel S. Long II, and to Mike Ashley, who introduced John, The Lord Chamberlain, to the world.

On an unnaturally hot and humid spring evening in 535 AD, during the reign of Roman Emperor Justinian, the unruly celebration of the founding of Constantinople had shifted from the city’s Hippodrome to its forums, streets, and alleys. In the narrow passages between tenements, revelers drank, sang, and cursed and blundered into fights or liaisons in a miasma formed of sweat, torch smoke, and cheap wine and perfume. Many would wake the next morning with headaches that would have them praying for death. Others would in fact be dead before the coppery sun materialized out of the sea mists. Among them would be one of four friends from the Great Palace.

The tall, lean Greek from the palace strode straight through the crowds. Something in his look and bearing cleared a path before him. As people stepped aside they whispered.

“The one called John the Eunuch?”

“Not within his earshot, fool! Quiet!”

If John heard he gave no sign. He spoke quietly but forcefully to the burly, bearded man at his side. “No, Felix. I am sure it was her. Do you think I would forget what she looks like? Fifteen years isn’t so long.”

Felix served as Captain of the Excubitors, the palace guard. He liked to consider himself a hard-headed man. “It’s a long way from where we were sitting to the floor of the Hippodrome. There was the glare from the sunlight, the dust stirred up by the bulls and horses.”

“How many bull-leaping troupes do you think there are in the empire today?”

“Until this afternoon, I’d have said none. It’s strange.”

“I was thinking exactly the same thing when the performers came out onto the track. How strange that I should be seated in the emperor’s box, watching a recreation of bull-leaping. When I saw Cornelia for the first time, I was a poor, young mercenary with dust on my boots.”

“The girl riding the bull was hardly more than a child, John. She couldn’t be the woman you knew.”

“You’ll have to beat Anatolius to her.” Felix referred to their younger friend who had sat with them at the Hippodrome. “He seems to have lost his senses too. It’s a good thing Leukos had to leave us to see that so-called soothsayer before the bull-leapers appeared. I’d have to keep all three of you away from each other’s throats.”

John nodded absently. The memory of the bull-leaper floated before him, obscuring his companion’s conversation and the thronged streets.

“Probably. His appointment was later than Leukos’, wasn’t it?”

“Yes. The two of us must be the only ones at the palace who haven’t had the benefit of the old fraud’s wisdom.”

“In a month he’ll be forgotten, replaced by a new sensation, perhaps the elephant the empress is having sent from India.”

“An elephant! There’s something much more interesting than any soothsayer. Now let’s find a tavern before this mob drinks the city dry.”

John regretted having agreed to join Felix after their official duties ended. His body was exhausted, his mind agitated. He wanted only the solitude of his study.

He made his way reluctantly through the swarming streets. Bonfires sent sparks cartwheeling upward toward the thin swatches of night sky visible between the buildings. Men paraded in costume, disguised as demons or wild animals. Others lurched along arm in arm, holding each other upright. Grotesque shadows groped past blank lower story walls toward open windows higher up.

“This will be a long night for the urban watch,” muttered Felix. He deftly elbowed aside a staggering duck-headed thing that gave a pitiful cry, collapsed into the gutter, and crawled off. A trio of ruby-lipped women in a doorway laughed shrilly.

The press was thicker in the square opposite the well-known brothel run by Madam Isis. Several men emerged from the building, staggering drunkenly. A corpulent fellow slunk out in their wake, looked around guiltily, and lumbered away as fast he could manage. John thought this was not the evening to stop and talk with his old friend Isis.

“Look,” directed Felix, “it’s the bear trainer who was entertaining at the Hippodrome.”

In the light from the fire in a corner of the square, John saw a bare-chested man in green tights standing in front of a cart which held an iron cage. The bear was a restless shadow behind the bars.

“Who’ll be next?” barked the man, brandishing a stout pole at the milling crowd. “Come on! You call yourselves Romans?”

A young man in a brocaded tunic and cloak stumbled forward, pushed by several comrades. One of them flicked a coin at the bear trainer, who followed its flashing arc and plucked it expertly from the air.

The bear trainer held out the pole to the obviously intoxicated young man, who took it gingerly in one hand. He appeared to feel he needed both hands free to remain standing.

“Give ‘er a poke, then,” ordered the bear trainer.

“You trying to steal Madam’s trade?” yelled a wit among the spectators. The young man stood uncertainly, swaying from side to side.

“Go on, Aoinos!” urged his companions. Their friend took an unsteady step forward and gingerly pushed the pole through the bars.

The bear reacted instantly. With a roar, it caught the pole, wrenching it out of the youngster’s hands. The suddenly free end whipped upwards, smashing the would-be tormentor’s nose.

The wounded man stumbled backward, turned, swung wildly at his laughing companions, and hit a bystander instead. The stranger pushed the young man down and Aionis’ companions took exception.

The bystander had friends too.

The surrounding mob surged toward the cart.

Anyone who lived in Constantinople knew that the slightest spark could set off a riot, making a city street more dangerous than a battlefield.

“Quick, let’s get away from here,” Felix urged.

Before John could react there was a roar, a chilling mixture of shouts and screams, and a mass of humanity crashed into him, like a wave against the seawalls. Caught by surprise he was driven nearly to his knees and propelled across the square. By the time he regained his balance Felix was nowhere to be seen.

The square grew silent. John realized that the crowd had suddenly drawn away from the cart. He pushed through massed bodies until he saw what had caused the flight.

The bear trainer’s iron cage had toppled off the cart. Its door was open. Atop the cage an enormous shadow moved.

A woman let out a shriek.

The bear rumbled deep in its throat and jumped to the ground.

John froze. The beast might shamble in any direction.

No longer the tormented, the bear lurched forward. A man in the short, simple tunic of a laborer found himself in the monster’s path. His head turned first one way and then the other, but he could not make himself run. His eyes gleamed in the bonfire light. A gurgle of fear escaped his throat and he crumpled to the ground. The bear, heedless, stepped over him.

The beast’s head swung from side to side, and then stopped, its bright, hard eyes focusing intently. It turned, advancing purposefully toward Madam Isis’ doorway.

That was where the bear trainer cowered.

The man whirled around nimbly, doubtless seeking to escape inside. But the bear was already moving. As the trainer’s hand scrabbled at the door, the bear’s massive jaws were already tearing out the side of his throat. Blood spilled down the trainer’s chest.

While the bear occupied itself, drawn swords and daggers glinted and a few onlookers cautiously moved toward the oblivious animal.

John didn’t wait to see what happened. He glanced about for Felix and, failing to see him, moved toward an alleyway as the quickest route of escape.

The alley was little more than a crevice between buildings which leaned toward each other overhead. Away from the fire-lit square, the night was impenetrable. Unseen cobbles were slippery underfoot. John steadied himself by running a hand along the rough side of the wall of the tenement opposite Isis’ house. He heard a rat skitter out of his way. The air stunk.

His boot was caught by something soft but bulky and he toppled forward. His knee banged down painfully on the stones.

Darkness shimmered before his eyes, dropping a veil of black silk as he scrambled to hands and knees. At least, he thought, the cobbles here were dry. He was blinking, trying to see what had tripped him, when shutters flew open directly above and closed just as quickly.

In the flash of light from the window John looked down into a pale but familiar face. The eyes were wide open, blue lips drawn back.

John spoke the man’s name, but his friend did not answer.

Wired by Robert L. Wise
The Edge of Forever by Melissa E. Hurst
Dragonfish: A Novel by Vu Tran
Courir De Mardi Gras by Lynn Shurr
Mistletoe and Montana by Small, Anna
Elizabeth and the Vampire's Cabin by Leilani Allmon
The French War Bride by Robin Wells
Divine Deception: The Will Traveller Chronicals by Robert James
Oceans Apart by Karen Kingsbury
The Heat Is On by Jill Shalvis
Our partner