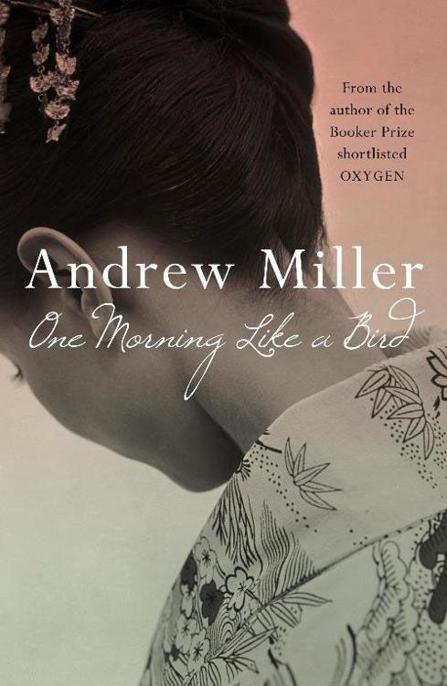 First published in Great Britain in 2008 by Sceptre

The right of Andrew Miller to be identified as the Author

of the Work has been asserted by him in accordance

‘I May Live On Until’ by Fujiwara no Kiyosuke, Translated by Kenneth Roxroth,

from ONE HUNDRED POEMS FROM THE JAPANESE, copyright © All Rights Reserved by

Excerpt from ‘One morning like a bird  . . .’ by Hitomaro, Translated by Kenneth Roxroth,

from ONE HUNDRED POEMS FROM THE JAPANESE, copyright © 1955 by

‘Will I Cease to Be’ by Lady Izumi Shikibu, Translated by Kenneth Roxroth,

from ONE HUNDRED POEMS FROM THE JAPANESE, copyright © 1955

All rights reserved. No part of this publication may be reproduced, stored in a retrieval system,

or transmitted, in any form or by any means without the prior written permission of the publisher,

it is published and without a similar condition being imposed on the subsequent purchaser.

living or dead is purely coincidental.

I may live on until

I long for this time

In which I am so unhappy,

And remember it fondly.

He is squatting in his room in the High City, an open book in one hand, the fingers of the other hand stretched towards the glazed blue belly of a brazier. The room is small, the old sewing room, only four and a half mats, and made even smaller by the clothes that hang from the beading along the walls, by the piled books, by the bedding still unrolled from the previous night, though it is already past seven o’clock and pitch dark outside, this last evening of the year.

It has been his room ever since he was sent to sleep there on his return from Uncle Kensuke’s after the Great Earthquake. The first room he ever slept in on his own and where, in his twenty-first year – the eleventh of the Showa Era – he wrote, between the February coup attempt and the end-of-the-summer cicadas, all the poems in
Electric Dragonfly
, a miraculous season, but one that has never returned  . . .

He sighs, withdraws the hand he was warming, turns the page of his book, transfers the book to the warmed hand and holds out the other to the charcoal. He is reading in French – not his beloved Rimbaud, but a tale by André Gide he read in Professor Komada’s class at Nihon – a strange romance he did not quite understand then, and which now, for entirely different reasons, he is failing to understand for a second time. For how is he to concentrate on the adventures of Gérard Lacase when so many other matters – matters that cannot simply be pushed aside – turn the words on the page into marks as meaningless as the light reflected in the panels of the drying-platform door beside him? So the young hero (who confesses to knowing
nothing
of life except through books) must set out again and again for the château of la Quartfourche while Yuji examines from every futile angle the latest and most pressing of his difficulties, the matter of his allowance, of its cessation, announced to him by Father in the garden study three days ago, no warning, no warming up, everything delivered in a kind of distracted aside, Yuji by the door, Father at his writing table, smoking and peering at the end of a bookshelf  . . . Apparently, the allowance had become a burden on the household economy. There was a need to make changes, to curtail expenses. It was the new circumstances, etc. An unfortunate but necessary measure, though at twenty-five he was surely old enough, etc. He was thanked for his understanding. It was understood, of course, that he understood.

‘From the New Year.’

So now he must find ways of making up the difference, the difference being almost everything. He will have to rely on people like old Horikawa, on Hideo Makiyama, a future of hackwork like the copy he wrote in November for the West Japan Shipping Corporation. (The newest ships! The fastest routes! Niigata docks are truly a gateway to the world!) Is this how a life goes wrong? How ambition is cut off and talent thwarted, so the fishmonger can be paid?

In the street below, too narrow for much in the way of traffic, a car is creeping towards the house. It stops beneath his window. A minute later the front entrance slides open and a voice, the sort that might emerge from the throat of a speaking bear, calls, ‘Is this a house of ghosts? Where are you all?’

Yuji drops the book onto his bedding, shrugs off the blanket he has been wearing round his shoulders, stands and descends – careful on the polished wood – the steep, unlit L of the stairs.

Yuji bows. Miyo takes the old man’s cape. It’s almost too heavy for her, like some huge, dark moth she has captured. Under the cape, Grandfather is wearing a kimono of slate-blue silk, an inch or two of saffron at the sleeves. Father comes in from the study. He greets Grandfather – an exchange of the slightest, most stubborn nods – then the three of them go through the Western room to the Japanese room, where, with Grandfather in the honour place, the alcove behind him, they settle onto sitting cushions. The brazier here is the largest in the house yet seems to warm only the tips of their noses, their knees and fingertips. For most of the winter the room is unused, but the Western room, with its comfortable furniture, its electric heater, would not be quite proper at New Year.

‘A good trip over?’ asks Father.

‘A driver I’ve had before. He knows his way around.’

‘These days I prefer to wake in my own house.’

‘Mmm. I understand. And how is your health?’

‘Better than yours, I expect. Books will cripple a man faster than digging in his garden ever will. Look at you. You can’t even sit with a straight back.’

‘Well, I shall have more time for the garden now.’

The front entrance again. A voice calling its greeting.

‘That’ll be Kushida,’ says Father, standing and going to receive him.

Yuji, left alone with Grandfather, wonders if there might be some way of hinting at the matter of his allowance, of its cessation etc, the difficulty it will cause, the sheer unfairness of it, but the old man, with his wide, wind-burnt face, looks as if he is stirring an enjoyable anger somewhere in his depths. It is not perhaps the moment.