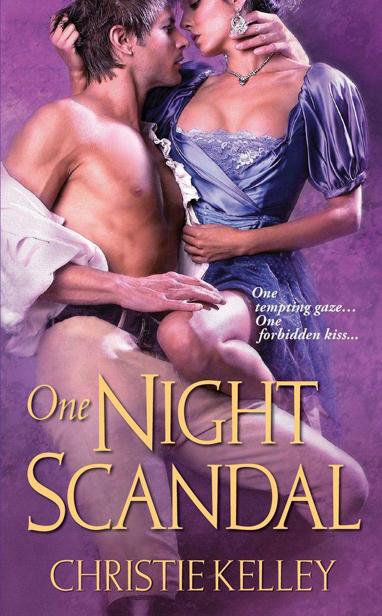 SHE SMELLED LIKE LAVENDER AND TASTED LIKE SIN . . .
“Are you nervous?” he asked.
She spun around with a forced laugh. “Of course not!”
“I have wanted to strip that beautiful dress off you since you walked into my study.”
Sophie swallowed and watched as he walked to the cheval-glass mirror and turned it toward the bed. “What are you doing?”
The smile he sent her almost buckled her knees. She had heard of many peculiar things men liked in bed from her mother, but Sophie never imagined her body reacting so intensely to the idea of watching Nicholas make love to her. Her pulse thrummed and her folds dampened with desire.
“Come here,” he whispered, holding out his hand to her.
She walked over by the bed where he stood. He turned her to face the bedpost and then kissed her neck again. Sophie shivered as his fingers went to the buttons on the back of her dress and slowly slid them through their holes. From the angle of the mirror, she could see his mouth follow the path of the buttons down her back.
He slipped the silk off her shoulders. The dress looked like a glittering pond with the light of the fire dancing upon it. His hands moved to her stays and quickly unlaced them. In only a moment, she was standing naked by the bedpost with the rest of her undergarments strewn across the floor.
She held onto the bedpost for support as he trailed hot kisses down her back to her derrière. He slowly turned her so she faced him again.
“Why am I naked and you are not?” she asked, reaching for his coat.
“That is a problem most easily solved.”
Books by Christie Kelley
EVERY NIGHT I’M YOURS
EVERY TIME WE KISS
SOMETHING SCANDALOUS
SCANDAL OF THE SEASON
ONE NIGHT SCANDAL
Published by Kensington Publishing Corporation
ONE NIGHT SCANDAL
Christie Kelley