Read One Night with Sole Regret 03 Take Me Online

One Night with Sole Regret 03 Take Me 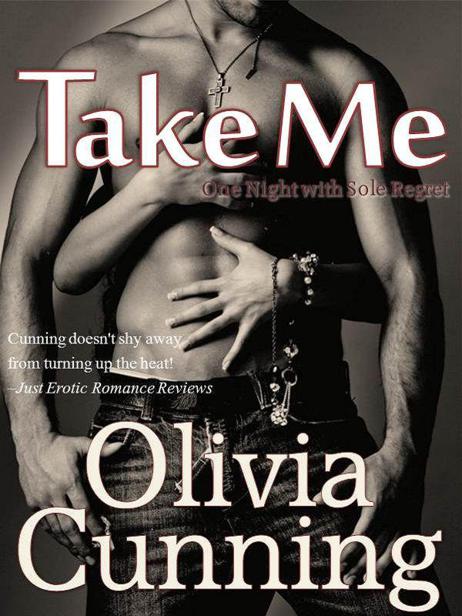 One Night with Sole Regret 3

Due to the costs of obtaining permission to quote lyrics in works of fiction, I intentionally did not
us
e song lyrics for
“Angel” and
“I Don’t Want to Miss a Thing” by Aerosmith and “Walking on Sunshine” by Katrina and the Waves
in this book
.
While I did not want to infringe upon the copyright of the lyricists
by using their words
,
I
do
encourage you to listen to the songs when you read those parts in this novel
.

All rights reserved. No part of this book may be reproduced in any form or by any electronic or mechanical means, including information storage and retrieval systems—except in the case of brief quotations embodied in critical articles or reviews—without permission in writing from the author at
[email protected]
.

This book is a work of fiction. The characters, events, and places portrayed in this book are products of the author’s imagination and are either fictitious or are used fictitiously. Any similarity to real persons, living or
dead,
is purely coincidental and not
intentional
.

For more information on the author and her works, please visit
www.oliviacunning.com
.

Edited by E.L. Hill at
www.anoveledit.com

One Night with Sole Regret Series:

Twice Upon a Time

Shade’s day had just gone from crap to shit. A hollow feeling of disbelief spread from his throat to his chest, and then rage crawled up the back of his neck. He stared at the empty parking spot between Kellen’s Firebird and Owen’s Jeep
,
trying to comprehend the absence
of
the ton of steel he’d left there. Shade glanced around the parking lot. Maybe his memory was fuzz
y. Maybe he hadn’t parked in his
usual space. Two semi-trucks containing Sole Regret’s equipment and stage setup had
already
been backed into the fenced lot so they’d be ready to head to San Antonio the next day. Their tour bus was on the opposite side of the lot. The band’s drummer, Gabe, was pulling his overnight bag from the luggage compartment beneath the bus. Everyone else—band and crew—was already heading for their vehicles. The only distinctly empty spot on the lot was the one where Shade had parked his favorite toy.

“I’m not a rocket scientist or anything,” Kellen said, “but I’d say it’s been stolen.” He tossed his overnight bag in
to
his Firebird’s trunk
.

“That’s what you get for being a douche and buying a hundred
-
and
-
fifty
-
thousand
-
dollar vehicle,” Owen said with a smirk.

“You should call the cops and report it,” Kellen said. He secured his long black hair at the nape of his neck with a leather strap he’d collected from his bag.
Then h
e opened his car door and said, “I’d stay and wallow in your misery, but I’m late for an appointment.”

Shade knew the feeling. “I don’t have time for this right now,” he said. “I have places I need to be. I’ve already missed my c
hance to crash Julie’s
party, but I don’t want her to think I forgot
her birthday
entirely.” He tossed his overnight bag on the ground where his car’s trunk should have been. “Fuck!”

“Where’s your car?” Adam paused between Owen and Shade.

Adam was
the band’s
lead guitarist and in second place on Shade’s shit list
,
right after whoever had stolen his ride. The three musicians stared at the empty parking spot as if expecting the car to suddenly uncloak
itself
and come out of hiding.

Shade was already pissed at Adam for making them hours late
getting home
. Adam had spent over half the day lounging around a hotel with his drug abuse counselor—who obviously wasn’t very good at what she did, because Shade had caught Adam using drugs backstage just two nights before. It would have served Adam right if the band and crew ha
d
left him to find his own way from Dallas to Austin. Maybe that would
’
ve taught the selfish prick a lesson. Everyone else had been looking forward to this day off in their home town, but the only person who mattered to Adam was Adam.

“I swear if I miss Julie’s birthday, you’re going to need a very good dentist,” Shade said to Adam.

Shade was surprised he’d offered, but Adam rode a motorcycle
,
and Shade didn’t think it was wise to be that close to him at freeway speeds. As pissed as Shade was, he’d probably strangle him to death from behind.

Owen slapped Adam in the center of the chest. “Hey, don’t worry about it. I already said I’d drive him. Julie’s house isn’t far from mine.”

And technically, Adam’s was even closer, but Owen knew how ticked off Shade was, and if the band lost both its vocalist and lead guitarist in a fiery motorcycle crash
,
they’d be shit out of luck.

Adam shrugged.
“All right.
But
,
Shade, once you cool down a bit, we need to have a man-to-man.”

Shade didn’t want to talk to him. His blood pressure was already high enough to cause a massive stroke. Nothing Adam could say would ever earn Shade’s forgiveness.

Adam turned and walked toward his bike, his head low, shoulders hunched. Kellen had already backed up his Firebird and was heading out of the lot with a rubber-burning squeal.

Owen retrieved Shade’s overnight bag from the asphalt and tossed it into the back
seat of the
Jeep
. After
throwing
his own luggage in
side
, he climbed behind the wheel and waited. Shade took one last look at the empty parking space, thinking perhaps he’d somehow overlooked the ton of black shiny metal that should be sitting there, and slid into the passenger seat
next to
Owen.

“Is Tina going to be pissed that you missed Julie’s party?”

“Tina is pissed that I breathe,” Shade said.
H
is ex-wife hadn’t actually invited him to the party. Not that her wishes were going to stop him from showing up.

Owen chuckled. “Ain’t that the truth?” He started the
Jeep
, put it in reverse and backed out of his spot. Owen waved at Gabe, who was climbing into his obscenely large pickup, ducking his head low to keep his foot-high red and black
mohawk
from scraping the roof of the cab. Gabe saluted Owen with two fingers before shutting his door.

Owen switched on the radio
,
and a hard and heavy song blared from the speakers. “So what did you get Julie for her birthday?”
he
yelled over the road noise and music.

Shade’s heart sank. “Fuck. I completely forgot to get her a present.” She’d be expecting a gift. Shade wasn’t even sure what she’d like.
But e
very female on the planet liked sparkly things, didn’t they? “I can’t show up empty-handed. Find the nearest jewelry store.”

Owen sighed heavily. “Sure. Why not? I obviously don’t have anything better to do with my night off than taxi you around. No family to see. No trouble to get into.”
Owen grinned
.

Shade knew exactly what kind of trouble Owen wanted to get into. He was the biggest skirt chaser Shade had ever met.
Even more so than the man
Shade
face
d
in the mirror.

Shade took several deep breaths to
calm
his frayed nerves. “Sorry,” he said
after a moment
. “I didn’t mean to order you around.” He attributed his shitty attitude to Adam, who was one hundred percent at fault
,
as usual. Shade’s car could be replaced, but his limited time with Julie could not be. “I’m a little keyed up at the moment.”

“Would you mind stopping at the mall on the way to the house?” He took another deep breath. “Please?”

“Not for you,” Owen said, checking over his shoulder as he merged onto the freeway.

“Seriously?
Son
of
a
… I should have called a fucking cab.” Let’s make this day suck a little more,
shall
we?

“I will, however, stop at the mall for Julie.”
Owen
smiled
,
the deviousness behind it frankly disturbing. “What a little heartbreaker. I’m going to marry her someday.”

Shade shoved him into the door. “Don’t you even think about touching
her.
”

Owen elbowed him in the ribs. “Really, dude? What the fuck is wrong with you tonight? You better calm down before you see her. You’ve completely lost your
cool
.”

Owen was right. And he knew that Owen wouldn’t ever become romantically involved with his Julie. But Shade had lost the rest of his depleted sense of humor when he’d been forced to have a maid let him in
to
Adam’s hotel room so Shade could get his sorry ass out of bed at one o’clock in the afternoon. God, why did the guy always have to fuck up his plans? And get him so riled up that he took out his frustration on people who didn’t deserve it? “Shit.”

Play Along by Mathilde Watson
Soul Meaning (A Seventeen Series Novel: An Action Adventure Thriller Book 1) by AD Starrling
Madam President by Cooper, Blayne, Novan, T
The Investigator by Chris Taylor
The Pulptress Versus The Bone Queen: Blood and Bone by Andrea Judy
Tessa's Temptation by Ella Jade
The Enlightenment of Nina Findlay by Andrea Gillies
The Madonna of the Almonds by Marina Fiorato
Stuck on You by Thurmeier, Heather
Beware of Geeks Bearing Gifts by Charlie Cochet
Our partner