Read One Night with Sole Regret 03.5 Share Me (Prequel) Online 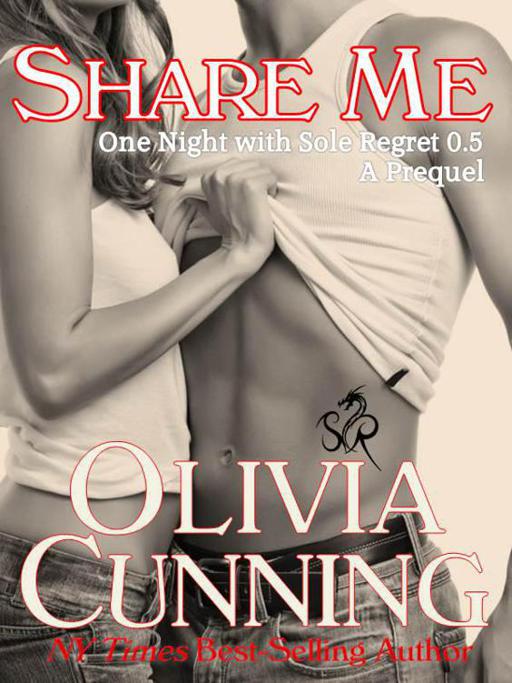 One Night with Sole Regret 0.5

All rights reserved. No part of this book may be reproduced in any form or by any electronic or mechanical means, including information storage and retrieval systems—except in the case of brief quotations embodied in critical articles or reviews—without permission in writing from the author at
[email protected]
.

This book is a work of fiction. The characters, events, and places portrayed in this book are products of the author’s imagination and are either fictitious or are used fictitiously. Any similarity to real persons, living or dead, is purely coincidental and not intentional.

For more information on the author and her works, please visit
www.oliviacunning.com
.

T
he heavy bass guitar line that rumbled from the auditorium’s loud speakers caused Lindsey’s entire body to throb. She’d been to several Sole Regret concerts at stadiums, so was painfully aware that their local auditorium didn’t do Owen Mitchell’s skill with four-strings any justice. The intimacy of the small venue made up for the inferior sound system, however. She’d never managed to get this close to the stage before. The anticipation of seeing the five members of Sole Regret from the second row had her rocketing out of her worn velveteen theater seat and leaning against the curved wooden chair back in front of her. She didn’t even care that the move earned her several annoyed looks and a loudly hissed, “Sit down!” from someone behind her.

Sit down
? At a Sole Regret concert? Was it even possible to remain seated when they were on stage?

Lindsey’s
best friend, Vanessa, grabbed her wrist and forced her to sit in her seat again. “Your boss is here,” she whispered harshly. “Try to control yourself.”

That was easier said than done.
Lindsey squirmed on the edge of her seat. Hearing Owen play, but not yet being able to see him was hell on her girly bits.

When
Lindsey caught her first glimpse of the bassist as he strolled casually across the creaky wooden stage, fingering thick strings with a steady cadence, she almost swallowed her tongue. The man was devastatingly gorgeous. His light brown hair was styled into a playful sweep that brushed his forehead. She couldn’t see the color of his eyes from this distance, but knew from staring at his pictures for hours on end that they were a hypnotic, brilliant blue. Her gaze moved from his perfect profile, down his neck to his body. Her hands clenched as she fought her need to launch herself on stage, tackle him to the ground, and explore every inch of his hard physique. Tonight Owen wore a tight navy blue T-shirt that clung to his nicely muscled chest and shoulders. A set of silver dog tags swayed between his cut pectoral muscles. As he continued his intro, she became fascinated with the masterful movement of his fingers over the thick strings of his bass guitar. Why were guitarists so fucking hot? It simply wasn’t fair.

Lindsey
groaned aloud as she imagined all the things that those strong, skillful fingers could do to her body. What she wouldn’t give to be that man’s fret board.

Lindsey’s
panties were decidedly wet. She couldn’t deny it. “He’s just so…” Her entire body shuddered as she couldn’t find words sensual enough to describe the man.

Vanessa rolled her eyes.
“Puh-lease. He’s cute and all, but I don’t think the mere sight of a man can inspire a big O.”

Vanessa turned her head in the opposite direction. “T.
M. I,” she said under her breath.

When the drummer, Gabe Banner, entered the song with a heavy, building progression of bass drum thuds, Lindsey’s heart thumped to match
his rhythm. She could just make out the red tips of Gabe’s mohawk behind the drum kit and the occasional flailing drumstick as he pounded out a wicked progression of beats on the skins. As the tempo built, Owen turned at center stage and rushed forward, halting at the front edge as the rest of the band came into view and joined the song. Adrenaline surged through Lindsey’s body. She was such a groupie for these guys. If her prudish boss, who was seated several seats to Lindsey’s left, hadn’t been sending her disapproving looks from behind her thick rimmed glasses, Lindsey would have already shed her bra and tossed it on stage. Fortunately, Lindsey still had enough self-control to keep herself from flashing her bare breasts at the band. Maybe.

Owen held a special appeal for Lindsey, but there was something about the band’s vocalist, Shade Silverton, that demanded attention. He knew how to work a crowd.
Shade encouraged the audience to its feet by holding one hand at waist level and lifting it up and down. Lindsey knew they wouldn’t be able to keep to their seats long. Even the stodgiest of attendees—who normally wouldn’t conceive of attending a metal concert—obediently rose from their chairs. It was easier for Lindsey to enjoy herself when the two rather large men beside her blocked her from Mrs. Weston’s ever critical glare of death. She was grateful to Mrs. Weston for hiring her to work at her investment firm, but the woman seemed to think she was in charge of every aspect of Lindsey’s life—both inside and outside the confines of the office. It was a good thing Mrs. Weston wasn’t a mind reader. She’d have been utterly scandalized by the X-rated thoughts racing through Lindsey’s mind as she watched Shade sing the chorus of Sole Regret’s hit song, “Darker”. Tall, dark and mysterious behind his pair of aviator sunglasses, Shade Silverton gave off an energy of raw, sexual power. What was it about the man that made her want to drop to her knees and suck his cock down her throat?

“Now that man makes my pussy quake,” Vanessa said, h
er eyes glued to Shade, who completed dominated the stage in his unquestionable self-confidence. “I just want to…”

The rhythm guitarist, Kellen Jamison, was whispering into Owen’s ear. They were both laughing at their lead singer and lead guitarist who seemed to be co
mpeting for crowd adulation. Lindsey worshipped the entire band. They didn’t need to fight for her attention. But those two—Owen and Kellen—made her entire body hum with pent up desire.

Where Owen had light eyes and hair, Kellen was a bronze god with shoulder length black hair and almost black eyes that could stare a person i
nto a coma. She praised all deities that the man never wore a shirt on stage. His long, lean body was filled out perfectly with tight muscles beneath taut, tanned skin. Tattoos decorated both arms in colorful sleeves. There was an intensity about Kellen Jamison that she couldn’t ignore. She doubted any woman could ignore it. And when he and Owen stood side-by-side, there was nothing more inspiring on the planet. That’s why the pair of them were at the top of her fuck-it list. She and Vanessa had constructed their fuck-it lists a few months before when complaining about their concurrent lack of boyfriends.

The
list was comprised of the three men on the planet she most wanted to fuck and if given the opportunity she was given a free pass to slut it up. It didn’t matter if she was currently involved in a relationship, married, eight months pregnant, or had become a cloistered nun. If the man in question was on her fuck-it list, it didn’t count against her. Vanessa said so and her friend had never steered her wrong.
Much
.

Number one on
Lindsey’s list was Owen Mitchell, and number two was standing right beside him vying for the top position, Kellen Jamison. Luckily, Lindsey wasn’t in a relationship or pregnant. And her current sexual dry spell might make her feel like a nun some days, but she hadn’t taken vows of chastity. If only she could get close to them. Gain their attention. Offer her body willingly. Then maybe she could have at least one of the three men who made her drool like a recent root-canal-recipient.

In the middle of the song, t
he lead guitarist of the band, Adam Taylor, moved to the front of the stage to play the solo. His dark hair was thick and cut in a shaggy style that drew attention to his face. He had the most sensual lips Lindsey had ever seen on a man. And a collection of chains around his neck and at his hip that she wouldn’t mind getting tangled up in. Adam’s lightning-fast fingers flew over electric guitar strings, churning up images of fingertips brushing against Lindsey’s highly attentive body parts. He was about to kick David Beckham from the number three spot of her fuck-it list. Unless Shade wanted the honor.

“I can help you out with that,” Joe, who worked
at her office, said in her ear.

It was like a cold bucket of water over her head. He hadn’t been sitting beside her at the start of the concert. He must have weaseled his way through the standing crowd when she hadn’t been paying attention. Lindsey shoved him out of her personal space and changed places with Vanessa so she’d have a best friend buffer that no man was likely to cross. The look Vanessa gave Joe—
her dark eyes wide, eyebrows threatening her hair line, lips pursed in a harsh line—had him staring at his shoes and running a finger under her collar.

“That’s what I thought,” Vanessa said and
churned her neck for added affect. “Lindsey done told you she wasn’t interested. Bye now.”

Lindsey
had told him. Many times. She’d thought he’d finally given up. Joe hadn’t bothered her in weeks. She must be flinging out pheromones like a bitch a heat or something. It wasn’t as if she could help it. The members of Sole Regret lit her on fire, but she’d rather sate her lust with her battery operated boyfriend than with Joseph Bainbridge. She was so not attracted to him and never would be. There was nothing wrong with him, but there was nothing
right
about him either.

Jo
e sidled away and Lindsey returned her attention to the stage. The song came to an end and the crowd cheered, the riotous noise echoing through the auditorium like waves of an angry sea. Shade moved to the center of the stage and spoke to the audience.

“Thanks
for coming to our benefit concert on this cold Christmas eve.”

“Ellie Carlisle wanted to be here tonight to thank you for helping her family out with her medical expenses. Unfortunately, after a strong dose of radiation therapy yesterday, they wouldn’t clear her to leave the hospital. So tonight she’s getting a lot of rest so she can wake up tomorrow and see what Santa brings a perfect angel for Christmas.”

It might have been the sound system, but Shade’s voice sounded a little raw as he talked about the Ellie, a
five-year-old girl who was fighting for her life in a local hospital. The town had come together several times to try to help her family out, but pancake breakfasts and silent auctions for afghans only raised so much money. A Sole Regret concert, on the other hand, brought in folks and their money for hundreds of miles.

Sker House by C.M. Saunders
The Sisters: A Mystery of Good and Evil, Horror and Suspense (Book One of the Dark Forces Series) by Don Sloan
Captive Heart by Phoenix Sullivan
Weird Tales volume 38 number 03 Canadian by McIlwraith, Dorothy
The Common Lawyer by Mark Gimenez
Titus solo by Mervyn Peake
Collins, Max Allan - Nathan Heller 12 by Angel in Black (v5.0)
Fortune & Fame: A Novel by Victoria Christopher Murray, ReShonda Tate Billingsley
With My Little Eye by Francis King
Lead Me On by Victoria Dahl
Our partner