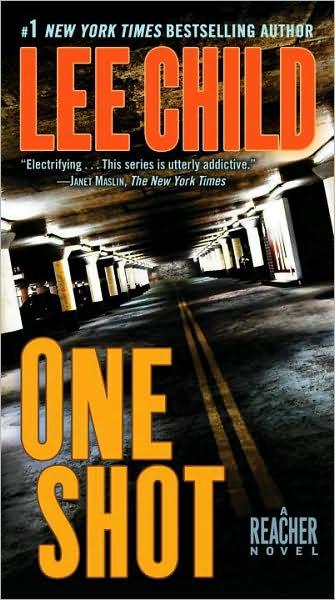 The final sentence of Child's ninth suspenser (after
The Enemy
)—"Then he could buy a pair of shoes and be just about anywhere before the sun went down"—is quintessential Jack Reacher, the rugged ex-army cop who practically defines the word "loner" and kicks ass with the best of 'em. In the book's gripping opening, five people are killed when a shooter opens fire in a small unnamed Indiana city. But when ex-infantry specialist James Barr is apprehended, he refuses to talk, saying only, "Get Jack Reacher for me." But Reacher's already en route; having seen a news story on the shooting, he heads to the scene with disturbing news of his own: "[Barr's] done this before. And once was enough." Nothing is what it seems in the riveting puzzle, as vivid set pieces and rapid-fire dialogue culminate in a slam-bang showdown in the villains' lair. (And what villains: a quintet of Russian émigrés, the stuff of everybody's worst nightmares, led by a wily 80-year-old who makes Freddy Krueger look like Little Lord Fauntleroy.) As usual, Child makes the most of Reacher's dry wit, cut-to-the-chase psychology and stubborn taciturnity—in short, this is a vintage double play for author and leading man.
Copyright © Reed Business Information, a division of Reed Elsevier Inc. All rights reserved.

Child's new novel begins when a sniper methodically kills five office workers with six quick shots and then disappears. But in a Child thriller the expectations aroused by one page are sure to be dashed on the next; unravelling and re-tangling violent narratives is the writer's specialty. This is the ninth of his books to feature the drifter-investigator Jack Reacher—a hybrid of John D. MacDonald's Travis McGee and Mickey Spillane's Mike Hammer—and it certainly ranks in the first tier of the series. There is considerable mayhem, lovingly described ("A long time ago the bones in his spine had been methodically cracked with an engineer's ball-peen hammer"), and there's a good cast, including suspicious law-enforcement personnel and an elderly Russian who is missing most of his fingers. Before it's all, vividly, over, one feels confident that Reacher—smart, rootless, and brave—will not only get his man but make him suffer.
Copyright © 2005

THE HARDEST time to move unobserved through a city.

Or, maybe the easiest. Because at five o'clock on a
Friday nobody pays attention to anything. Except the
road ahead.

The man with the rifle drove north. Not fast, not slow.

Not standing out. He was in a light coloured minivan
that had seen better days. He was alone behind the
wheel. He was wearing a light-coloured raincoat and the
kind of shapeless light-coloured beanie hat that old
guys wear on the golf course when the sun is out or the
rain is falling. The hat had a two-tone red band all round
it. It was pulled down low. The coat was buttoned up
high.

Traffic slowed to a crawl where First Street started up a
hill. Then it stopped completely where two lanes
became one because the blacktop was torn up for
construction. There was construction all over town.

Driving had been a nightmare for a year. Holes in the
road, gravel trucks, concrete trucks, blacktop
spreaders. The man with the rifle lifted his hand off the
wheel. Pulled back his cuff. Checked his watch.

He took his foot off the brake and crawled ahead. Then
he stopped again where the roadway narrowed and the
sidewalks widened where the downtown shopping
district started. There were big stores to the left and the
right, each one set a little higher than the last, because
of the hill. The wide sidewalks gave plenty of space for
shoppers to stroll. There were cast-iron flag poles and
cast-iron lamp posts all lined up like sentries between
the people and the cars. The people had more space
than the cars. Traffic was very slow. He checked his
watch again.

A hundred yards later the prosperity faded a little. The
congestion eased.

First Street opened out and became slightly shabby
again. There were bars and dollar stores. Then a
parking garage on the left. Then yet more construction,
where the parking garage was being extended. Then
further ahead the street was blocked by a low wall.

Behind it was a windy pedestrian plaza with an
ornamental pool and a fountain. On the plaza's left, the
old city library. On its right, a new office building. Behind
it, a black glass tower. First Street turned an abrupt right
angle in front of the plaza's boundary wall and ran away
west, past untidy rear entrances and loading docks and
then on under the raised state highway.

But the man in the minivan slowed before he hit the
turn in front of the plaza and made a left and entered the
parking garage. He drove straight up the ramp.

There was no barrier, because each space had its own
parking meter. Therefore there was no cashier, no
witness, no ticket, no paper trail. The man in the minivan
knew all that. He wound round the ramps to the second
level and headed for the far back corner of the structure.

Left the van idling in the aisle for a moment and slipped
out of the seat and moved an orange traffic cone from
the space he wanted. It was the last one in the old part
of the building, right next to where the new part was
being added on.

He drove the van into the space and shut it down. Sat
still for a moment. The garage was quiet. It was
completely full with silent cars. The space he had
protected with the traffic cone had been the last one
available. The garage was always packed. He knew that.

That was why they were extending it. They were
doubling its size. It was used by shoppers. That was
why it was quiet.

Nobody in their right mind would try to leave at five
o'clock. Not into the rush hour traffic. Not with the
construction delays. Either they would get out by four
or wait until six.

The man in the minivan checked his watch.

He opened the driver's door and slid out. Took a
quarter from his pocket and put it in the meter. Twisted
the handle hard and heard the coin fall and saw the
clockwork give him an hour in exchange. There was no
other sound. Nothing in the air except the smell of
parked automobiles. Gasoline, rubber, cold exhaust.

He stood still next to the van. On his feet he had a pair
of old desert boots.

He glanced back at the parking meter. Fifty-nine
minutes. He wouldn't need fifty-nine minutes. He
opened the minivan's sliding rear door and leaned
inside and unfolded a blanket and revealed the rifle. It
was a Springfield MIA Super Match autoloader,
American walnut stock, heavy premium barrel, ten shot
box magazine, chambered for the.308. It was the exact
commercial equivalent of the M14 self-loading sniper
rifle that the American military had used during his long-ago years in the service. It was a fine weapon. Maybe
not quite as accurate with the first cold shot as a top-of-the-line bolt gun, but it would do. It would do just fine.

He listened to the silence and lifted the rifle off the rear
bench. Carried it away with him to where the old part of
the garage finished and the new part began. There was
a half-inch trench between the old concrete and the
new. Like a demarcation line. He guessed it was an
expansion joint.

For the summer heat. He guessed they were going to
fill it with soft tar.

Directly above it there was yellow and black Caution
Do Not Enter tape strung between two pillars. He
dropped to one knee and slid under it. Stood up again
and walked on into the raw new construction.

Parts of the new concrete floor were trowelled smooth
and parts were rough, still waiting for a final surface.

There were wooden planks laid here and there as
walkways. There were haphazard piles of paper cement
sacks, some full, some empty. There were more open
expansion joints. There were strings of bare light bulbs,
turned off. Empty wheelbarrows, crushed soda cans,
spools of cable, unexplained lengths of lumber, piles of
crushed stone, silent concrete mixers. There was grey
cement dust everywhere, as fine as talc, and the smell
of damp lime.

The man with the rifle walked on in the darkness until
he came close to the new northeast corner. Then he
stopped and put his back tight against a raw concrete
pillar and stood still. Inched to his right with his head
turned until he could see where he was. He was about
eight feet from the garage's new perimeter wall. Looking
due north. The wall was about waist high. It was
unfinished. It had bolts cast into it to take lengths of
metal barrier to stop cars hitting the concrete. There
were receptacles cast into the floor to take the new
parking meter posts.

The man with the rifle inched forward and turned a little
until he felt the corner of the pillar between his shoulder
blades. He turned his head again.

Now he was looking north and east. Directly into the
public plaza. The ornamental pool was a long narrow
rectangle running away from him. It was maybe eighty
feet by twenty. It was like a large tank of water, just
sitting there. Like a big above-ground lap pool. It was
bounded by four waist-high brick walls. The water
lapped against their inner faces. His line of sight ran on
an exact diagonal from its near front corner to its far
back corner. The water looked to be about three feet
deep. The fountain splashed right in the centre of the
pool. He could hear it, and he could hear slow traffic on
the street, and the shuffle of feet below him. The front
wall of the pool was about three feet behind the wall that
separated the plaza from First Street. The two low walls
ran close together and parallel for twenty feet, east to
west, with just the width of a narrow walkway between
them.

To Wed A Viscount by Adrienne Basso
The Duke's Alliance Book Two: A Dangerous Husband by Fenella J Miller
The King's Rose by Alisa M. Libby
Knight, Dee S. - Bride of the Pryde (Siren Publishing Ménage Amour) by Dee S. Knight
The Gift: A Novella by Sandra Marton
Behind the Lines by Morris, W. F.;
BITTER SWEET CRAVINGS (The Kingsmen MC Book 6) by Oakes, Tara
The Italian Billionaire's Secretary Mistress by Sharon Kendrick
The Whitefire Crossing by Courtney Schafer
Laird of the Wind by King, Susan
Our partner