Read One To Watch Online 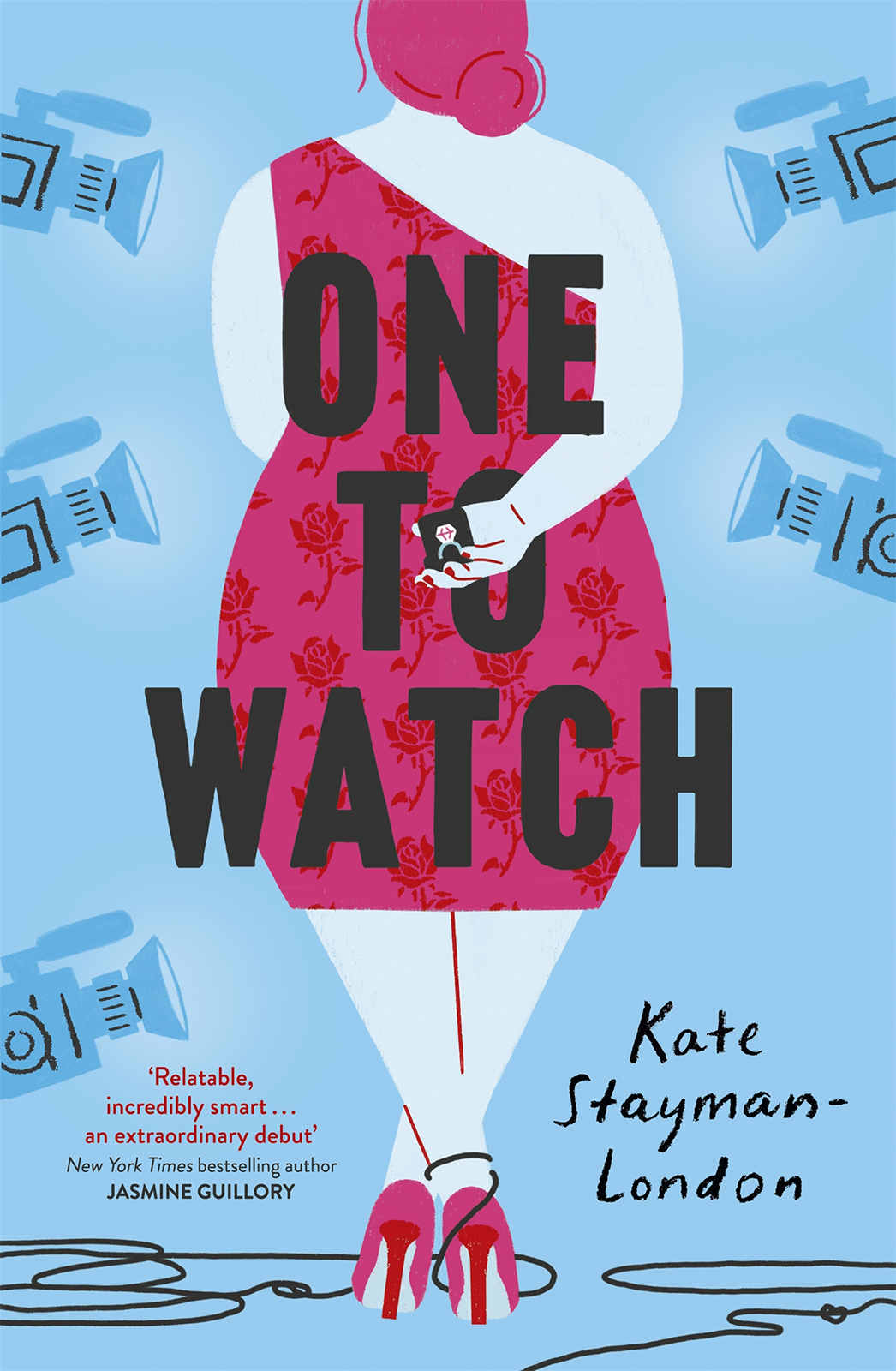 Praise for
ONE TO WATCH

“
One to Watch
drew me in from the first chapter; this book was relatable, incredibly smart, and thoughtful about body image and the way the media treats women, and just plain entertaining. I adored this extraordinary debut and had so much fun reading it!”

“Bea Schumacher is an irresistible heroine, and
One to Watch
will win you over just as quickly. Its clever skewering of reality TV tropes is balanced by a sweet sincerity and real belief in true romance.
The Bachelor
should be so lucky as to land a Bea of its own.”

—
HEATHER COCKS
and
JESSICA MORGAN
, bestselling authors of
The Royal We
and
The Heir Affair

“A delicious and whip-smart page-turner about the complication of being a complicated woman in the world today.”

“
One to Watch
is a powerful story about the love we have for ourselves and others. It’s a vibrant, tender, stylish, sexy, and outrageously joyful book, and I couldn’t bear to put it down for one second.”

“A fast, furious read, one that is brimming with wit but also packs a serious punch. The compelling narrator—Bea Schumacher—won my heart immediately, and Stayman-London’s storytelling sizzles.”

“Stayman-London’s charming debut is chatty and fun, brilliantly capturing the highs, lows, and drama of reality TV. … This smart, delightful page-turner is a great way for dating-show fans to pass the time while waiting for the next season.”

ONE
TO
WATCH
Kate Stayman-London

First published in Great Britain in 2020 by Two Roads

An Imprint of John Murray Press

The right of Kate Stayman-London to be identified as the Author of the Work has been asserted by her in accordance with the Copyright, Designs and Patents Act 1988.

For Dede, who thinks it wouldn’t kill the women on
The Bachelor
to wear pants to a cocktail party once in a while.

Thanks for choosing Dad and me to be your family.

But love is blind, and lovers cannot see

The pretty follies that themselves commit.

We’ve all been dumped. We’ve all fallen for the wrong guy or girl.

We’ve all made mistakes. But we all want that thing at the end.

The flea market at Clignancourt was at the far northern edge of the city, a few blocks past the final stop on the number 4 Métro, where the Parisian architecture grew more simple, more mundane—a reminder that not all of the city was steeped in centuries of history and romance. Some of it was just where people went to work and took their kids to school and bought their bread in plain old supermarkets instead of quaint boulangeries.

Bea had come to the flea market in search of gifts for her family—maybe some lace for her mother or vintage records for her brother Duncan—but she also hoped she might find some etchings for herself, or, even better, some children’s books with hand-tipped illustrations to read with her stepfather to her new baby nephew. Her friends in her study-abroad program had raved about their flea-market finds, so Bea thought it was worth a trip, even if there was no chance of buying chic vintage clothes like the ones they had modeled for her. It was hard enough for Bea to shop in America, let alone here in Paris, where it was almost unthinkable to see a woman on the street who couldn’t be described as “bird-boned.”

After years of practice, Bea thought she’d mastered the art of being large and invisible at the same time—the dark, baggy clothes, the quiet manner, the downward gaze. When she arrived as a freshman at UCLA and found herself surrounded by lithe, toned Californians, she was afraid she’d stand out like a bulbous blemish on a glassy complexion, but the L.A. culture of self-obsession made it easier than she expected to slip by unseen.

In Paris, though, she felt eyes everywhere she went. The city was so beautiful, Bea’s favorite place she’d ever been—yet she couldn’t shake the feeling that the entire population was noticing her, judging her, preferring, silently, that she would leave. Waiters and booksellers in cramped cafés and shops, narrow aisles stuffed with tables and wares, Bea stepping carefully sideways to avoid toppling someone else’s plate of pain au chocolat, salivating at the sound of those crunchy, buttery pastries that waiflike Parisians relished each morning without a second thought. Whenever Bea stepped into a patisserie to order something for herself, there were ripples of sideward glances, even occasional bald stares, the accusation always implied:
It’s your own fault you look like this.

It was easier when she got farther out from the center of the city, into the diverse neighborhoods by the canal where the streets were wider and the pace was slower, where groups of students laughed and drank wine from paper cups on big concrete blocks by the water. It was similar at Clignancourt, Bea thought as she made her way down the few blocks from the Métro to the flea market while people hurried by, too focused on their own lives to pause to sneer at her.

Bea couldn’t tell what the flea market was like from the outside—for a solid block she could see only the back walls of the stalls, dark slabs of plywood and plasterboard, and she started to feel skeptical that this market could possibly be as extraordinary as her friends had insisted. But once she found the entrance, she understood: It was like stepping through Alice’s looking glass into an entirely other place where everything was wonderful and strange.

The market was a maze, with pathways that cut at haphazard diagonals—whichever way Bea turned, she never seemed to pass the same stalls twice, each new alley bringing untold bins of brass knobs and walls of antique oil paintings and spools of silken ribbon. The stalls themselves didn’t feel makeshift—some were covered in ivy or string lights, others had stucco walls and wooden shelves piled high with leather-bound books so dusty Bea imagined they’d been there for decades. Wandering the market’s aisles, Bea felt a sense of belonging she’d never experienced anywhere else in Paris. Or maybe, she considered, it was just that everything there was so lovely and bizarre that nothing and no one could be out of place.

Before Bea realized how much time had passed, the sun was starting to set, so she made her way toward the edge of the market as proprietors packed up their stalls. Bea hadn’t stopped by a single clothing purveyor, but near the market’s exit, one stall caught her eye: It was filled exclusively with capes—racks and racks of heavy brocades and soft furs and embroidered silks.

Bea cast the stall a longing glance, but it wasn’t any use. She was sure that no cape in the place was big enough to cover her body, that instead of cocooning her in luxury, the capes would simply hang off her back like a child playing dress-up with a beach towel fastened at the neck. But the shopkeeper, a reedy, androgynous Frenchwoman in her sixties in oversized black glasses, saw Bea looking and took a step toward her.

“
Vous désirez?
” she asked with a quick flick of her eyebrow; her voice was deep and throaty.

“Ah, American.” She switched to English immediately—Parisians always did. “What is your name?”

“Beatrice”—Bea pronounced it the French way,
Bay-ah-treez
—“but everyone calls me Bea.”

“
Enchantée,
Bea. I am Jeanne.” Jeanne took her hand and clasped it firmly, and Bea immediately warmed to her; she smelled like spiced wine. “Tell me, Bea, who is the woman whose style you most admire?”

Bea’s mind went immediately to the black-and-white movies she’d spent hours watching as a kid on basic cable in her family’s rec room. She’d taken a couple of film classes at UCLA, and she was thrilled to discover that Paris had dozens of single-screen cinemas with little paper tickets and red velvet seats that showed classic American movies (with French subtitles, of course) every night of the week. Bea frequented these theaters whenever she had a free evening, delighting in the escape of elegant starlets and breakneck banter. As she considered Jeanne’s question, she thought of the different actresses she revered: She could never be twee like Audrey Hepburn, nor statuesque like Katharine. In her wildest fantasies, she imagined herself more like a femme fatale of film noir—a mixture of soft and hard, of danger and intense vulnerability. In Bea’s opinion, there was one actress whose style embodied that ideal more than any other, who effortlessly combined sensual laces and silks with angular sunglasses and sharp-shouldered blazers.