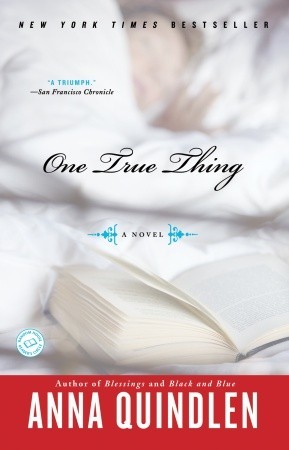 Praise for
ONE TRUE THING

“Fiercely compassionate and frank … conveys a world so out of kilter and so like ours that its readers are likely to feel both exhilarated and unnerved by its accuracy.”

“It is simply impossible to forget.”

—
—
ALICE HOFFMAN
,
author of
The Ice Queen
and
Blackbird House

“A heart-wrenching book—and that is what makes it so good ….
One True Thing
examines so many facets of life and all its pain that the reader might fear a depressing end. Yet it is far from that. Rather, the reader will come away with a new appreciation for family—and life.”

“There is not a single false word in
One True Thing
. Readers of her columns in the
Times
are aware that Anna Quindlen has a first-class mind; now they will know she has a great heart as well.”

—
SUSAN ISAACS
, author of
Any Place I Hang My Hat

“The best recommendation is that it calls you back for another read …. This is a book of catharsis.”

“Anna Quindlen’s gift lies in her uncanny ability to document what she calls the ‘Sturm und Drang’ of everyday life ….
One True Thing
tackles subject matter more painful and intense than anything she’s tackled before.”

“Anna Quindlen has been a woman whom other women channel through.”

“Anna Quindlen is a marvelous writer …. Throw in Quindlen’s remarkable ability to make you laugh, cry and think beyond the pages, and you have a wonderful book with a story that will touch anyone who cares about life.”

“A tender, beautifully told tale … that will move you to reexamine your intimate relationships in search of the
One True Thing.”

“If literature were judged solely by its ability to elicit strong emotions, columnist-cum-novelist Quindlen would win another Pulitzer …. The clever mystery ending (complete with satisfying twist) is an added bonus.”

“One thing is true: this is a remarkable book. Anna Quindlen writes about family with all the humanity, wit, and pain of going home. This is a strikingly honest and transforming book.”

“Another winning novel … It’s easy to see why Quindlen’s first novel,
Object Lessons
, was a bestseller …. Women will identify. Men should read [it] to understand what faces their women …. This novel offers you vivid experience without pain …. A masterpiece.”

“One True Thing
is as thrilling in its emotions as it is in its suspense …. Anna Quindlen brings all her journalistic talents to her fiction.”

“Impossible to put down.”

“Insightful, beautiful, and poignant … This is a story of suffering and courage, the lost and the newly discovered. It is a tale of unexpected twists.”

Happily Ever After
The Tree That Came to Stay

A Conversation With Anna Quindlen

Questions and Topics for Discussion

J
ail is not as bad as you might imagine. When I say jail, I don’t mean prison. Prison is the kind of place you see in old movies or public television documentaries, those enormous gray places with guard towers at each corner and curly strips of razor wire going round and round like a loop-the-loop atop the high fence. Prison is where they hit the bars with metal spoons, plan insurrection in the yard, and take the smallest boy—the one in on a first offense—into the shower room, while the guards pretend not to look and leave him to find his own way out, blood trickling palely, crimson mixed with milky white, down the backs of his hairless thighs, the shadows at the backs of his eyes changed forever.

Or at least that’s what I’ve always imagined prison was like.

Jail was not like that a bit, or at least not the jail in Montgomery County. It was two small rooms, both together no bigger than my old attic bedroom in my parents’ house, and they did have bars, but they closed by hand, not with the clang of the electric, the remote controlled, the impregnable. An Andy Griffith jail. A Jimmy Stewart jail. Less Dostoyevsky than summer stock, a jail for
the stranger in town who brings revelation in the leather pack he carries slung over one shoulder and has a thrilling tenor voice.

There was a shelflike cot arrangement, and a toilet, and a floor with speckled linoleum, so much like the linoleum in Langhorne Memorial Hospital that I wondered if the same contractor had installed both. When the door was locked the policeman who had brought me down the long hall after I was photographed and fingerprinted left, his eyes more than a little sympathetic. We had once been in the same beginner’s French class at the high school, he to eke out another C in his senior year, me to begin the diligent study that would culminate in the Institut Français prize at graduation. After the sound of his footsteps died away the place was very quiet.

From up front, where the police dispatcher sat, there was the sound of someone typing inexpertly, the occasional animal honk from the police two-way radios. From above there was a hum, a vague, indeterminate sound that seemed to come from electricity running through the wires just beneath the acoustical tile ceiling. Above me were those plain fluorescent tube lights.

Sometimes now, at work in the hospital, I will look up at a certain angle and I see that ceiling again, those lights, and the sense of being in that small space once more is overwhelming, but not really unpleasant.

Sitting on the cot, my hands clasped lightly between my knees, I felt relief. The lockup, I repeated in my head. The slammer. The joint. All attempts to scare myself, all those cheap slang terms I had heard come from the nasty fishlike lips of Edward G. Robinson as I watched
The Late Show
in the den, the house dark, the screen gray-blue as a shark, my father and mother asleep upstairs. The can, I thought to myself. The Big House. But overlaying them all was a different thought: I am alone. I am alone. I am alone.

I lay on my side on the cot and put my hands together beneath my cheek. I closed my eyes, expecting to hear a voice in my ear, a cry for help: for a cup of tea, a glass of water, a sandwich, more
morphine. But no one spoke; no one needed me any longer. I felt peaceful as I could not remember feeling for a long time. And free, too. Free in jail.

For the first time in days, I could even stop seeing my father, with his smooth black hair and his profile a little dulled by age and fatigue; I could stop seeing him spooning the rice pudding into my mother’s slack mouth, like a raven tending to the runt in the nest, all wild, weird tufts of head fuzz and vacant, glittery eyes. Spoon. Swallow. Spoon. Swallow. The narrow line of his lips. The slack apostrophe of her tongue. The blaze of love and despair that lit her face for just a moment, then disappeared.

I can still see that scene today, play it over and over again to reduce it to its small component parts, particularly the look in her eyes, and in his. But, back then, during my night in jail, for a few hours it disappeared. All I was aware of was the hum.

It reminded me of the sound you could hear if you walked down the street on a summer day in Langhorne, particularly where I lived, where the big houses were. There was always the hum. If you were attentive, stood still and really listened, you could figure out that it was the hum of hundreds of air conditioners. They were pushing cold clean beautiful air into cold clean beautiful rooms, rooms like ours, where the moldings teased the eye upward from the polished surface of the dining-room table or the cushions, with their knife creases left by the side of someone’s hand, on the big brown velvet couch across from the fireplace and the Steinway.

That was how I thought about it, although that was not how it had been for the last few months of my mother’s life. That was how it looked before the couch from the den had been crowded into the living room to make room for the hospital bed. Before the furniture had all been moved back against the walls to make room for the wheelchair. Before the velvet nap of the couch had been disfigured by vomit and drool.

Inside the lids of my eyes I could see a kind of dull reddish light, and it reminded me of the light on those streets at the end
of the day, particularly in autumn. In the magic hour the cars, so distinct, so identifiable, would come down our street, to turn into driveways or continue to some of the small streets and culs-de-sac farther on. Dr. Belknap the pediatrician, whose patient I had been all my life. Mr. Fryer, who worked in the city as a financial consultant and was obsessed with golf. Mr. Dingle, the high school principal, who could only afford to live on our street because his wife had inherited the house from her parents.

And then, late at night, after the streetlights buzzed on, with their own hum, a few others came. Always last was Mr. Best, the district attorney. My brother Brian used to deliver his
Tribune
every morning, just after sunrise, and Bri said that every time he pedaled his bike up the driveway to the sloping sward of pachysandra that set the Best house off from the street, Mr. Best would be standing there. Impatient at dawn, he would be tapping his narrow foot in leather slippers, wearing a corduroy robe in the winter and a seersucker robe in summer. He never gave Brian a tip at Christmas, always a baseball cap that said
MAY THE
BEST
MAN WIN,
which was what Mr. Best gave out in election years.