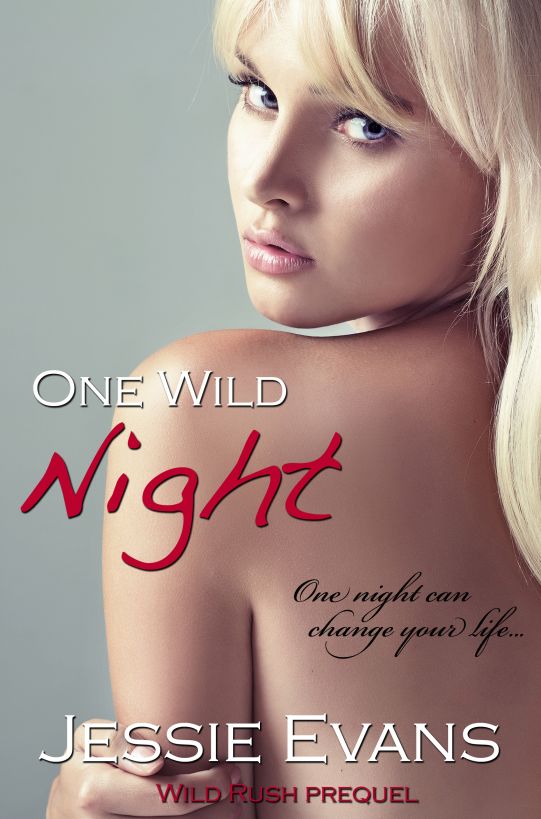 One night can change your life...

"Come on, Caitlin, let me help you get what
you need."

I’m standing at the threshold of a moment
that will change my life, and not necessarily for the better. I
know that, I know it with everything in me, all the way down to the
marrow of my bones.

But still I nod. And take
his hand. And let him lead me out into the night
.

This book may not be reproduced or used in
whole or in part by any means existing without written permission
from the author. This book is a work of fiction and any resemblance
to persons, living or dead, or places, events or locales is purely
coincidental. The characters are productions of the author’s
imagination and used fictitiously. Cover image by Conrado for
Shutterstock. Cover design by Bootstrap Designs. Edited by Robin
Leone Editorial.

In a week, it will all be over.

In a week, the pieces of my family will be
scattered like dandelion seeds in a hard wind and there’s not a
thing I can do about it.

Deep down, I know that. I know this time the
Cooneys are so screwed there will be no sweet-talking our way out
of trouble. Still, I keep shifting the bills around on the scarred
kitchen counter and punching numbers into my calculator, hoping to
find a way to keep the balls in the air and the kids out of the
system.

But the state doesn’t care that I’ve been
running this family since I was seventeen and doing a pretty good
job of it until now. My father’s the legal guardian. All it will
take is a hard look in our direction—the kind of hard look that
will come when we get kicked out of the house and the kids start
going to school smelling like they’re living in a van—and it will
become obvious that Chuck is an unfit parent. Before you can say
“throw the baby out with the bathwater,” the four underage Cooneys
will be scooped up by the Department of Human Services and trundled
off to separate foster homes.

All of that could be avoided, of course, if
the taxman would give me a break. But the government doesn’t care
that my father dropped all our mad money at
The Sweet Pickle
last month, paying off his bar tab before the owner’s grandson,
Hal, made good on his threat to beat the money out of Chuck. The
taxman wants the delinquent taxes, and the kids, whose lives that
measly twelve hundred dollars is going to ruin, be damned.

You’d have the cash if you’d stood up to
Chuck and kept your mouth shut about where the money was
hidden.

“Right,” I mumble to myself. “And let a guy
with a metal plate in his shoulder get beaten half to death.”

“You talking to me, Caitlin?” Danny calls
out from the living room, where my twelve-year-old brother has
settled in to play one of his bloody video games while the baby is
watching Sesame Street upstairs.

Danny ups the volume in response. I grit my
teeth and shift the electrical bill to the back of the queue—it’s
April and still cool, we can make do without air conditioning if
the electricity gets shut off—but that only frees up another
hundred and twenty bucks. I can snag a bag of groceries from Sister
Maggie down at the church, but that won’t feed this crew for more
than a few days.

Three boys between the ages of eight and
twelve take down a
lot
of food, and even Emilie is starting
to put away her share. Emmie’s always been on the small side so I’m
glad she’s putting on weight, but at the rate these kids are
sucking down mac 'n cheese there’s no way I’m paying the property
tax without somebody going hungry. Unless a rich old aunt from the
old country dies and leaves me her fortune, that twelve hundred,
seventy-three dollars, and two cents I need by next Wednesday might
as well be twelve million.

My gram always said you couldn’t make a silk
purse from a sow’s ear, and I don’t even have a sow’s ear. I’ve got
three little brothers, a two-year-old niece I’ve raised since she
was two months old, a father who hasn’t held down a job in six
months, a hundred bucks left in my bank account, and bills.

To say this is not the way I was hoping to
spend my twentieth birthday would be an understatement.

With his dark blonde curls, green eyes, and
ski-slope nose, Danny and I resemble each other more than anyone
else in the family, but we couldn’t be more different. I spend my
life cleaning up other people’s messes; he spends his lighting
fires for me to put out. He’s a smart-mouthed troublemaker who’s
already made a name for himself with the Giffney P.D. and the only
“bad” thing I’ve ever done was drop out of school when I was
seventeen to take care of the baby and the other kids after my
sister ran off. I work two jobs and do my best to make sure the
kids eat healthy and Emmie doesn’t watch too much T.V., while Danny
is constantly on the verge of being suspended for conduct code
infractions.

The chances of him graduating junior high,
let alone high school, without a stint in juvie are looking less
likely with every passing year, but still…I keep trying.

It’s not like anyone else around here is
going to be the voice of reason.

“Seriously, D,” I say, knocking his hand
away when he reaches for my Coke. It was the last one in the fridge
and I need caffeine if I’m going to stay awake to celebrate my
stupid birthday. “I don’t want another call from Mr. Pitt. You need
to pull it together and finish this year strong.”

“Whatever.” Daniel rolls his eyes. “Mr. Pitt
can suck my dick.”

“I’m serious, Danny.” He reaches for my soda
again and I slap his hand a second time. Harder. “No more
language,” I insist in my nag voice, the one I can barely stand to
hear myself I’ve used it so much with him. “It’s the straight and
narrow for you. Even at home. I don’t have time to deal with any
more of your crap this month.”

“What about your crap?” he mumbles. “You
cuss all the time.”

“Please, D…” I cross my arms and shake my
head, too tired for the usual “but I’m an adult and I work my ass
off to feed you so I can do what I want” lecture. “Can you give me
a break? Just for a week or two? Until things calm down?”

He sighs, his lips pulling down at the edges
as his gaze slides toward the envelopes spread out on the counter.
“Everything’s going to be okay though,” he says, the sass gone out
of his tone. “We’re not going to lose the house, right?”

“Of course not,” I lie, forcing a smile.

I refuse to let my brothers worry the way
I’ve worried my entire life. One stomach full of acid and holes is
enough for this family.

“I’m sorting it out,” I continue, gathering
the bills into a pile and shoving them back in the shoebox I keep
on top of the fridge, wishing I could make our debt disappear as
easily. “But if you’ve got any money left over from all that snow
shoveling you did in January, it would help. I can pay you back
once tips pick up at the restaurant.”

Daniel shrugs. “You don’t have to pay me
back. I’ve only got forty bucks left, anyway. You can just take
it.”

“Thanks, booger.” I smile, a real one this
time, remembering why I couldn’t have made it through parts of the
past few years without this kid.

He’s a pain in my ass, but he’s also my
right hand man when I need him.

“Puke,” Danny says, but there’s a smile
tugging at his lips when he lifts his hands into the air, warding
off the hug he can no doubt sense is coming. “I’ll go get the
money, but you have to tell Ray to get out of the bathroom. I’ve
been trying to get a shower since I got back from practice and he’s
been in the bath for a fucking hour and a half.”

“Language!” I call out to my brother’s
retreating back. “And check Emmie’s pull-up while you’re
upstairs.”

“Whatever,” Danny calls back, but I know
he’ll check.

He loves Emmie, probably more than he loves
anyone in the world. Danny was a nine-year-old obsessed with
monster trucks and boxing robots when our big sister, Aoife, left
her daughter at our house and split. Nothing in Danny’s nature up
to that point had indicated a paternal streak, but he couldn’t get
enough of his baby niece. He carried Emmie all over the house,
talking non-stop, and dragged her Pack 'n Play into his room so he
could watch over her while she slept.

Even now, Emmie’s toddler bed sits in the
corner of Danny’s room, her dolls, baby blocks, and pink toy
kitchen a stark contrast to the skateboard posters and skeleton
stickers decorating the other side of the room. It’s Danny who
Emmie crawls in bed with when she has a bad dream, and Danny who
finally got her
mostly
potty-trained a few weeks back,
saving me some much needed money on pull-ups.

The chances that Danny and Emmie will end up
in the same foster home are slim to none. And even if they do, I
can’t imagine a foster family agreeing to a twelve-year-old boy and
a two-year-old girl sharing a room. There are probably rules
against that kind of thing, rules that have to be followed no
matter how much it’s going to devastate two kids who love each
other.

My stomach gurgles and acid burns the back
of my throat.

“You’re going to figure it out,” I mutter to
myself, crossing to grab an antacid.

I’m on top of the kitchen counter on my
knees, reaching up to the top shelf where I’ve kept the medicine
since Ray ate a bar of chocolate laxatives when he was seven, when
the front door opens and the smell of garlic and melted cheese
wafts through the living room into the kitchen.

Immediately, my breath comes easier and my
stomach gurgles—with hunger this time—reminding me I haven’t eaten
anything since ten o’clock this morning.

“Pizza!” Isaac booms in his relentlessly
upbeat voice as the door slams shut behind him. “Come and get it,
Cooneys!”

“You’re an angel!” I call out, grinning as I
hop down from the counter, antacid forgotten as I make a beeline
around the island into the living room.

Footsteps thunder down the stairs, and
moments later Isaac is surrounded by jumping kids, and four pairs
of grabbing hands.

“Hold on,” he says, holding the pizza out of
Danny’s reach, brown eyes crinkling at the edges when he laughs.
“Wash your hands first. It’s too hot to eat yet, anyway.”

“Wash ‘em good,” I call out as Danny,
Ray—who has apparently decided to emerge from bath time seclusion
in the name of supper—and Sean race each other toward the
downstairs bathroom.