Read Only One for Me Online

Only One for Me 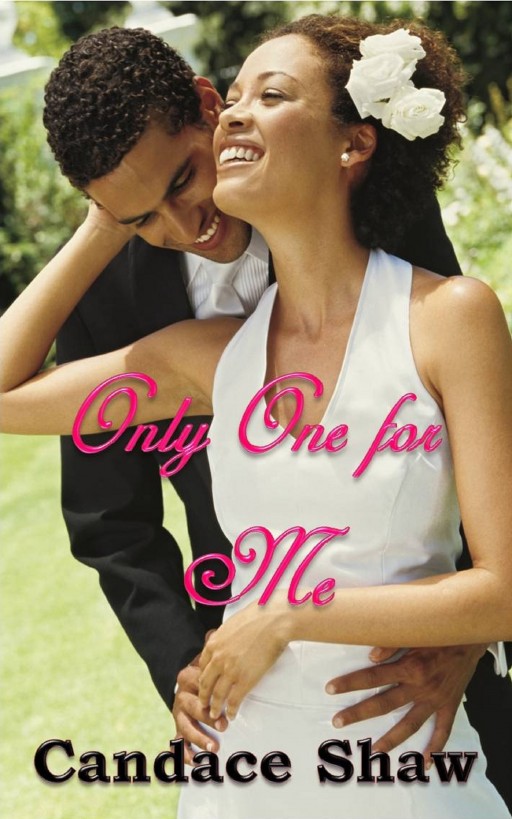 Only One for Me

This is a work of fiction. Names, characters,
places, and incidents either are the product of the author’s
imagination or are used fictitiously, and any resemblance to actual
persons, living or dead, business establishments, events, or
locales is entirely coincidental.

All rights reserved. This book, or parts
thereof, may not be reproduced in any form without permission from
Candace Shaw.

This ebook is licensed for
your personal enjoyment only. This ebook may not be re-sold or
given away to other people. If you would like to share this book
with another person, please purchase an additional copy for each
recipient. If you’re reading this book and did not purchase it, or
it was not purchased for
your use only,
then please return to Smashwords.com and purchase your own copy.
Thank you for respecting the hard work of this author.

A special thank you to readers, Sherika
Williams and Ollie Moss who won the opportunity for me to create
two characters by using their names. Thank you so much,
ladies!

Cannon Arrington has pushed aside
a social life to dedicate his time to medical school,
extracurricular activities, and helping others that is, until he
lays his eyes on the angelic face of Yasmine Dubose. For Cannon,
meeting her was a breath of fresh air. Something about the bubbly,
sexy teacher makes him realize he needs to stop and smell the
roses.
Yasmine has had a crush on Cannon since high school, but he’d never
noticed the nerdy freshman. Now she’s blossomed into a woman who’s
full of life. She knows Cannon’s drive for success is important to
him, but she fears he’ll become even more of a workaholic than her
father, who died when she was a child.
Will Cannon settle down and learn how to balance his career and
love life, or will he lose the simply amazing woman who has stolen
his heart?

Cannon Arrington raced along the
interstate in his white Mustang, shifting gears and weaving in and
out of traffic. He’d overslept, as usual, and was running late to
the Read-a-Thon at Garrett A. Morgan Elementary School. A
second-year medical student at Meharry Medical College, he’d stayed
up until three in the morning working on a presentation he had to
give at noon. He’d hit the snooze button on the alarm clock a few
times before realizing he had overslept.

Glancing at the time on the dash, he
had twenty minutes to be seated in a first grade teacher’s rocking
chair to read a book. He’d volunteered with the graduate chapter of
his fraternity, which adopted the school as a partner in education
in order to show a more visible presence of positive
African-American men as role models. His best friend and fraternity
brother, Doug Winters, presided over the program and had persuaded
Cannon to participate, which only added more to his already
overflowing plate of activities outside of medical
school.

He pulled into a parking
space, popped the trunk, and grabbed the crate of books before he
dashed into the front door of the school. Since it was the
beginning of October, he decided he would read
Stellaluna
by Janell Cannon. It was
one of his favorite books about a fruit bat that was raised by
birds. He’d brought enough copies for each student in the class to
have.

Cannon turned his attention to the
left to find Doug, who was dressed in a pair of khaki’s, a black
polo shirt with their fraternity crest, and holding a clipboard.
Cannon had on the same attire. They met each other
halfway.

“
Yes, except when it comes
to setting the alarm clock. I had to switch you and Tony. You’re
now reading in Ms. Dubose’s classroom. I’ll walk with
you.”

“
Dubose? My favorite
teacher from high school was Ms. Dubose.”

“
Well, I doubt it’s her.
She’s Sherika’s best friend. They’re from Memphis, like you, and
teach across the hall from each other.”

Cannon glanced sideways at his friend.
“Oh, so that’s why you chose this school,” he said with a smirk.
“Because your new girlfriend teaches here.”

“
She’s not my girlfriend.”
They turned down a bright yellow hallway with colorful bulletin
boards displaying student’s work. “We’re just hanging and getting
to know each other.” The gentlemen stopped in front of a door
displaying cut-out autumn leaves falling from a tree. “Here’s Ms.
Dubose’s classroom. I’ll be across the hall reading,” Doug said
with a grin and a wink.

Cannon chuckled. “I’m sure you will
be.”

He turned toward the classroom door,
shifted the crate of books on his left hip, and pushed open the
already ajar door.

Approximately twenty students sat on
an oversized carpet of the United States in front of a bulletin
board with a calendar, student work, and a dry erase board. The
students were listening intently as their teacher sat in a rocking
chair, reading a book to them in the sweetest voice he’d ever
heard.

“
Ms. Dubose, we have
company,” a little boy stated in a loud tone.

She lifted her head, wearing a
breathtaking smile on her angelic face, and his heart skipped a few
beats. Her smile grew even wider and even more amazing as she
tilted her head to the left with a look of recognition on her face.
She handed the book to a little girl sitting in front of her. The
teacher stood and proceeded toward him at the back of the classroom
while the little girl continued reading the book to the class. He
watched as the young teacher moved gracefully in a pair of gray
dress slacks and a black, short-sleeved sweater, which complimented
her small frame. Her sandy brown, layered bob framed her soft face,
but he couldn’t take his eyes off her smile. It warmed his
heart.

She stopped a few feet in front of him
and held out her hand. He set the crate of books on a desk and took
her small hand into his.

She glanced at the students, who were
sitting nicely on the carpet while their classmate read to them.
“You probably don’t remember me, but my mother is Emma Dubose at
Frederick Douglass High in Memphis.”

“
She was my favorite
teacher, and I do remember you.” He paused and lowered his voice so
the students wouldn’t hear. “
Yasmine
. You would do your homework
after school in your mother’s classroom during our science club
meetings. Surprised to see you in Nashville.”

Yasmine flashed her beautiful smile
again, and he had to hold in a sigh. She was so breathtaking. She
had definitely grown up from the geeky, little freshman he
remembered sitting shyly in her mother’s classroom with her nose in
a book. She was all woman now, and a fine one at that.

“
I attended TSU. I just
graduated in May and was offered a job here. And you?”

“
Cool. Small world.” She
looked in the direction of her students as the little girl finished
reading. The children had begun to speak quietly. “I’m so surprised
to see you. I thought someone else was coming to read.”

“
Doug switched us. Well, I
guess I better go read.” He grabbed his autographed copy of
Stellaluna
and followed
her toward the front of the classroom. He tried to keep his eyes
straight ahead; however, they kept glancing at the cutest butt he’d
ever seen.

The children’s voices silenced when
they saw their teacher approach. She stood next to the rocking
chair and displayed that damn smile again. Cannon cleared his
throat and tried to stay focused. He was there to read not lust
over the teacher, but if she kept flashing that smile and shining
her pretty brown, doe-like eyes on him, he wouldn’t be able to
concentrate.

“
All right class. Let’s
welcome Mr. Arrington, a student at Meharry Medical College.”
Yasmine motioned for him to sit in her rocking chair. “What do we
say, boys and girls?”

“
Good morning, Mr.
Arrington,” all of the students said at once.

“
Good morning, students,”
he said in an upbeat tone as he sat down. He glanced at Yasmine,
who gave him an encouraging nod. She walked to her desk and perched
on top of it. The sexy, bubbly teacher with the simply amazing
smile was doing a number on him. He cleared his throat, opened the
book, and prayed he could keep focused on reading and not
Yasmine.

Yasmine stared at Cannon as he read
one of her favorite books to her class. She couldn’t believe when
she looked up and saw Cannon Arrington, her high school crush,
standing in the back of her classroom. She’d almost fallen out of
her rocking chair, but instead, quickly handed the book she was
reading to one of her brightest students.

Of course, he never really spoke to
her in high school; just an occasional hello or nod if he saw her
in the hallway, but only because her mother was his mentor. He
probably did so out of obligation considering he was a senior, and
she was only a freshman. A nerdy, gawky-looking freshman with
braces and whose mother was a science teacher at the school. Boys
didn’t even notice her until her junior year, when she somewhat
blossomed, but were scared to ask her out because of her
mother.

When she was fourteen, she thought he
was the most handsome boy she’d ever laid her eyes on. Now at
twenty-two, he was the most handsome man she’d ever seen. Her gaze
casually roamed his chiseled face with the strong jaw line,
butterscotch kissed skin and low-cut wavy hair. His deep, baritone
voice—that sounded like a baby bird at the moment—sent electric
shocks through every cell in her body. His over-powering presence
seemed to take over the classroom. Around six feet one with a
medium-build frame, he was way too big for her rocking
chair.

She grabbed her camera to take a few
pictures of Cannon and her students for the Read-a-Thon bulletin
board and for her personal photo album, of course. She was
disappointed when Cannon was done with his question and answer
period. When she saw him glance at his watch, making a slight
grimace, she knew it was time to wrap up.

“
Thank you, boys and
girls. I brought each of you a copy of
Stellaluna
.

The students cheered and clapped.
Yasmine slipped from her desk and walked over to stand next to the
rocking chair. His masculine, woodsy scent tantalized her nostrils,
causing her to go weak for a second, but she quickly shifted gears
and put on her teacher’s hat.

“
Thank you, Mr.
Arrington,” the students exclaimed in unison.

“
You’re very welcome. It
was my pleasure.” Cannon stood, and Yasmine’s heart sunk a little.
He was leaving.

“
Can you come back next
Friday?” a little boy asked, and the rest of the class began to beg
in their cute little six-year old voices. Yasmine silently begged
in her head.
Pretty please? With a cherry
on top?

Cannon smiled sincerely at them. “I’ll
set something up with your teacher, but it may not be next
Friday.”

After the students gave him a group
hug and high-fives, Cannon waited by the door while Yasmine
dismissed the students to their desks and instructed them to begin
working on the grammar questions on the board. She pressed play on
the CD player and the sounds of Mozart filled the room. Once they
were settled, she met Cannon at the back of the
classroom.