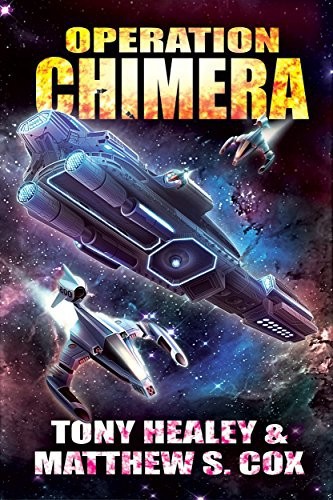 ope, dreams, and regret hung thick in the air, mixed with the antiseptic scent of new membranes in the atmosphere scrubbers. Lieutenant Michael Summers, duffel slung over his left shoulder, trudged along the steel-blue corridors of Horizon Station. All around him, the air vibrated with the din of activity and near-tangible presence of people. Small children, too young to comprehend where their older siblings were going, darted among a crowd visible through the doors at the end of the hallway.

A few others walked in the same direction, clad in the same white uniform of a newly minted officer. In two years of Academy, they never had managed to give him one that fit. At least this time―when he was taking a trip he might not return from―they finally got his size right.

Two Milsec soldiers snapped to attention and saluted as he reached the door they flanked. Arc plasma rifles clicked against pale grey armor-covered legs. Michael returned their salute as he passed out of a narrow, inclined hallway and into wide-open concourse. Ordinarily, shuttle departure platforms were off-limits to civilians; given the nature of the day, however, command had given a pass to immediate family. Captain Driscoll, the officer in command of his new assignment, had personally approved it. That order alone had earned him much respect among a crew he had not yet seen face-to-face. Even his name evoked a sense of mythical awe; some of the stories that filtered through the Academy about him seemed like the sort of thing that got wilder with each retelling.

On Michael’s left, a row of stairways led up to where sixteen shuttles perched just inside atmospheric retention fields. Four inches of energy separated the air in here from the vacuum-darkness of space, and made the front ends of the loaf-shaped craft glow azure. Large view panels and a sloped, flat front end made the shuttles look like oversized minivans, only on struts and pads rather than wheels. Plain white, their only adornments were the large TDF logo on the side near the rear and the various red and yellow arrows painted here and there to indicate important panels and “no step” locations. Michael spent a moment observing flight crews scurrying about to prep the shuttles: silver hoses loaded electrogel, tech carts connected to the avionics systems ran diagnostics, and shuttle pilots worked through their preflight checklists. The chemical reek from the e-gel whipped by on a frigid breeze; the air chilled by the vacuum outside the atmo-fields created a strong gust that clung low to the deck. Michael gave the hoses a wary glance and sped up. E-gel went from semi-liquid to pure energy in the power cores of ships too small for dedicated reactors, but it also had violent tendencies when exposed to air. If something went wrong, he did not want to be anywhere nearby.

Toward the station-side wall, several columns ringed with comm terminals bore the brunt of the crowd. Individuals whose families could not make the trip in person crowded around them, while closer to the departure shuttles a mass of sobbing mothers tried without success to change the minds of their sons and daughters.

As if it was that easy.
Michael chuckled to himself.

He turned on his heel and joined the shortest line. His mom would not be able to get here all the way from the colony on Bophor; her arrival at the graduation ceremony last week had been an unexpected surprise.

The minutes ticked by. Two small boys ran circles around his line, oblivious to the emotion in the air and content to publicize their boredom by running around and screaming. One despondent person at a time, the line moved; with each departing individual, he inched closer. The last man in front of him had it out with his pregnant wife―she did not approve of his volunteering for service on the
Manhattan
. When all the guilt she flung at him failed to erase his signed contract, she hung up in a huff. The man sighed, let his head bonk into the terminal, and took a deep breath. He turned; from his blue coveralls, he appeared to be one of the flight support crew.

At the sight of Michael, he snapped a quick salute. “Morning, sir.”

“Airman,” said Michael with a nod.

They pivoted to slide past each other. Michael wondered why a man with a baby on the way would have volunteered for such a risky deployment. Those questions were not his business, but he gave the crewman a confident nod and a pat on the arm.

“For what it’s worth, we’ll all do everything possible to make sure you get home to her.”

“Thank you, sir.” The airman smiled through his nerves and saluted.

Except for the shimmering green logo of the Trans-Gal system, the otherwise dark screen caught a weak reflection of Michael’s head. Shaved on the sides, his flat top lived up to its name. The idea he was now out of Academy and could let it grow a little brought a half-smile, though his dreadlock days were long gone. He swiped at the terminal, brushing the star-map to the side with several passes of his hand until the pale cream-colored dot where his mother lived came into view.

Planet Bophor zoomed in to fill the entire screen after he tapped it. The surface moved in a slow spin to the left, threads of cottony clouds drifted in the opposite direction to the planet’s rotation. At the bottom, a black rectangle appeared with a faint green line through the center.

“One moment.” The words ‘attempting outbound connection’ scrolled in a band around the planet. “Lieutenant Michael Summers, please be aware that due to the nature of your assignment, this communication will be monitored by Fleet Intelligence. Be mindful of sensitive information. Please confirm.”

He leaned his head back, sighed, and then faced the screen. “Understood.”

After a moment of blank screen, his mother’s face appeared, surrounded by two dozen fifth-graders trying to get a look at him. He grinned at their eagerness, waving. Even over a hypercomm link spanning dozens of light years, his diminutive mother loomed large, even through a tiny eight by eleven inch screen. From a distance, she looked not quite five feet tall, but as soon as she opened her mouth, she had a presence as if six and a half.

“Hey, Mom. I just got to the shuttle bay, there’s still about twenty minutes until launch.”

Watching a tear well up and slip down over her cheek made him break eye contact. Overhead lights spread a sheen across her dark skin as she turned to wipe it away. She spared a moment to calm her students down.

“Always on time, just like your dad. Michael, I don’t want you to do anything crazy out there, you understand me?”

“I mean it, boy. I know you got your head fluffed up from that sim, but that doesn’t mean you get to take any stupid risks.”

“It wasn’t a sim, Mom. The Falkirk Gauntlet uses real ships in a real asteroid belt. I got the third lowest time ever recorded.”

Khana Summers covered her mouth; the thought of her son zipping through a field of rocks the size of battlecruisers terrified her mute for a few seconds. “Didn’t you say you placed seventh when you told me about that a few months ago?”

“Mom, you’re makin’ me brag.” He looked around to ensure no one was eavesdropping, and lowered his voice. “A couple of others posted faster times, but they only scored twenty-three percent, or worse, on the weapons part. I got eighty-two.”

Uncrashable Dakota by Marino, Andy
Kith and Kill by Rodney Hobson
The Unknown Mistress - An Erotica and Romance Paranormal/Historical Novella by Mayfair, Dorian
Nuestra especie by Marvin Harris
Obsidian Wings by Laken Cane
The Tower of the Forgotten by Sara M. Harvey
Entwined by Elisabeth Naughton
The Sea Between by Thomas, Carol
Escape by Moonlight by Mary Nichols
The Humming of Numbers by Joni Sensel
Our partner