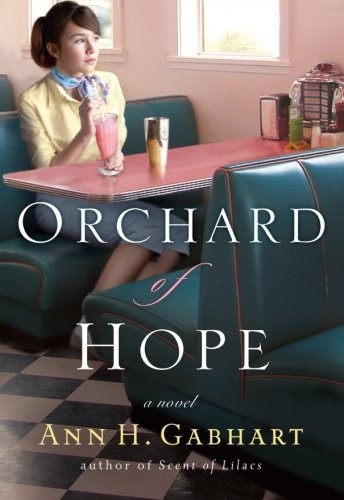 Also by Ann H. Gabhart
The Scent of Lilacs

Scripture is taken from the King James Version of the Bible.

The Hollyhill noon siren jolted David Brooke awake. He couldn’t believe he’d dozed off at his desk, at least not until he read over the editorial about Monday night’s town council meeting he’d been working on for the next issue of the
Banner
. Three paragraphs of nothing but snooze news.

David glanced through his scribbled notes and then clicked on his little tape recorder to review what went on at the meeting. Mayor Palmor’s voice boomed out on the tape as he pushed the council to authorize funds for new Christmas decorations for the lampposts on Main Street. Councilman Jim Jamison interrupted to say the old decorations looked fine to him. The mayor came back at him with “I’ll bet you don’t even know what the old decorations look like, Jim.”

The tape kept rolling with nothing but a scratchy playback sound. That was while Jim had stalled and wiped the sweat off his forehead with his handkerchief before he said, “It’s way too hot to think about Christmas decorations. It’s August, for gosh sakes. What we really need to be talking about is painting crosswalks before school starts. Now that the schools are fixing to desegregate, crosswalks might be especially important.”

“Why’s that, Jim? You think our Negro boys and girls don’t know where to cross the street?” It was easy to hear the irritation in the mayor’s voice.

David clicked the recorder off and read the note he’d written and blocked off with dark lines in the middle of his scribbles about the meeting.
Write editorial on new beginnings.
Peaceful
new beginnings.
The
Banner
had carried a front-page story a few weeks back when the Hollyhill School Board had voted to desegregate the schools. Congress had passed the Civil Rights Act in July, so it was high time Hollyhill stepped into the modern era. As true as that was, David thought the closing of the elementary school up in the West End where virtually every black family in Holly County lived actually had more to do with the old school needing a roof than with the Civil Rights Act. Desegregation was going to happen. It was just a matter of when.

Nobody in Hollyhill was expecting problems. The superintendent, Aaron Boyd, had told David the only reason the schools hadn’t been desegregated already was that the black community hadn’t wanted to give up West End Elementary and Mrs. Rowlett, who taught fifth through eighth there. Some said she was the best teacher in the county. This fall she’d be teaching Latin at Hollyhill High. David grabbed the pad he kept by his phone for story ideas and wrote
interview Francine Rowlett.
Then with a sigh, he clicked the recorder back on to hear more of the arguing.

Jim was answering the mayor, not quite in a shout, but almost. “I just think the safety of our kids should be a priority. All our kids, and crosswalks might help.”

Harry Williams was talking now. “We’d have to check into the state regulations on where to put the crosswalks and how wide they should be.” Harry’s son was an attorney over in Grundy, so he considered it his duty to bring up any possible legal issue.

Mayor Palmor’s voice got a little louder as he said they were talking about city streets so it didn’t matter what the state said. David clicked the recorder off again. Nobody had said much worth hearing after that anyway, with nothing getting done about anything until finally Ramona Sims, the clerk who kept the minutes, had yawned into her hand, looked at her watch, and announced she had to go pick up her son at baseball practice. She’d clicked her ballpoint pen, folded up her notebook, and ended the meeting.

So David was trying to write an editorial about how the council members and the mayor should work together for the good of the town, but after looking over what he’d written so far, he decided it might be more interesting watching the paint dry on those crosswalks if the council ever agreed on where to put them. Maybe he should write his editorial on the proper placement of crosswalks. He wanted to hold off on the “peaceful new beginnings” one until the Wednesday school started.

He would have to pick his words carefully for that one. He didn’t want to be the kind of hometown newspaper editor who used his pen to stir up trouble just to come up with fresh headlines. Hollyhill had never had any racial problems. Mayor Palmor had told David just last week that Hollyhill was lucky to have such “good Negroes who weren’t out doing sit-ins and marches just to cause problems.”

David hadn’t pursued the subject. He’d let it slide into whether or not the heat wave was going to ease up any time soon. He felt cowardly when he thought about it now. He should have reminded the mayor that the Lord saw all men the same. And women. Centuries ago Paul had written to the Galatians,
There is neither Jew nor Greek, there is
neither bond nor free, there is neither male nor female: for ye are
all one in Christ Jesus.

David should be writing the same sort of thing to the people in Hollyhill. How all people were guaranteed certain inalienable rights in their country. But instead, he was just filling space with words that wouldn’t do anything except put his readers to sleep. David crumpled up the paper and threw it toward his wastebasket. He missed.

He stared down at the new blank sheet on his notepad and felt his eyes getting heavy again. At least it wasn’t his sermon for Sunday he kept falling to sleep on, although he’d been in the doldrums trying to come up with an idea for that too. He felt as stagnant as the Redbone River had looked when they passed it last night on the way to prayer meeting, and Aunt Love had declared the dog days of summer officially here.

It wasn’t easy coming up with fresh ideas week after week for editorials or sermons. Of course, he trusted the Lord to supply the sermon ideas, but David had to do his part by praying and searching the Scripture. He couldn’t expect to just stand behind Mt. Pleasant’s pulpit come Sunday and open his mouth and have a fine sermon spill out.

David depended on Wes to keep the press in working order. Thank goodness nothing major had broken since Wes had been in the hospital recovering from the surgery to piece his leg back together. He knew Wes took the papers out to the post office for the mail delivery and to the grocery stores, the drugstores, and the Grill to be sold. He knew Wes blocked out most of the ads. What David hadn’t known was how many hours that took until he started doing it all himself.

Everybody had the same number of hours in the day, David reminded himself. The Lord had given him this day, August 13, 1964, and hadn’t held back a single hour. But lately twenty-four hours hadn’t been enough. Sometimes David felt as if his own life had been hit by a tornado, with all that had happened since June.

It wasn’t only the
Banner
. He’d just taken on the full pastorate at Mt. Pleasant after the people there decided they could be served by a pastor with an ex-wife out in California and an unmarried daughter expecting a baby the end of September. The thought of Tabitha’s baby, his grandbaby, made him smile.

In the past couple of weeks after the word about the baby got around, some folks had stopped him on the street to tell him how sorry they were about Tabitha’s “trouble” while they tried to come up with a polite way to ask if she planned to give the baby up for adoption. A baby did need a loving mother and father. It was God’s plan.

But that didn’t mean the Lord wouldn’t help with a new plan if the first plan went awry. The Lord had helped him find a way nearly fourteen years ago when Adrienne had handed Jocie over to David to raise.

He remembered holding Jocie after Adrienne had gone back into the bedroom and firmly shut the door. Jocie had been so tiny—fragile almost, as she’d weighed in at just over five pounds—that for a moment he was terrified. But then she pushed open her eyes and seemed to look directly at him while her lips had turned up in a smile. It didn’t matter that the experts said newborn babies couldn’t focus on anything and only smiled because they had gas and hadn’t gotten it straight which way was smiling and which way was frowning. He felt her very being reaching out to him. At that moment she captured his heart and became his forever.

Thank goodness she hadn’t been hurt in the tornado. David looked at his watch. Where was Jocie? She was supposed to be there to go with him to pick Wes up at the hospital. They had to get him checked out before three, and it was a long drive even if they didn’t get caught behind a rock truck on Highway 27. At least all the trips to see Wes at the hospital had given David plenty of one-on-one time with Jocie. The Lord could make good come out of anything.

David shoved his notes in a folder and plopped it on top of the pile of papers in his to-do basket. Jocie might be waiting for him back in the pressroom. She’d been helping set up the ads, working practically full time except when she had to help Aunt Love at the house. That’s where she’d been this morning, helping Aunt Love get a bed set up in their living room for Wes. The man couldn’t very well stay by himself in his rooms over the newspaper offices. He’d never get up the back stairs to begin with.

Wes could barely walk across his hospital room using his crutches, and no wonder with the way the rods holding his bones together stuck out of his cast. He was beginning to really look like the alien from Jupiter he sometimes claimed to be.