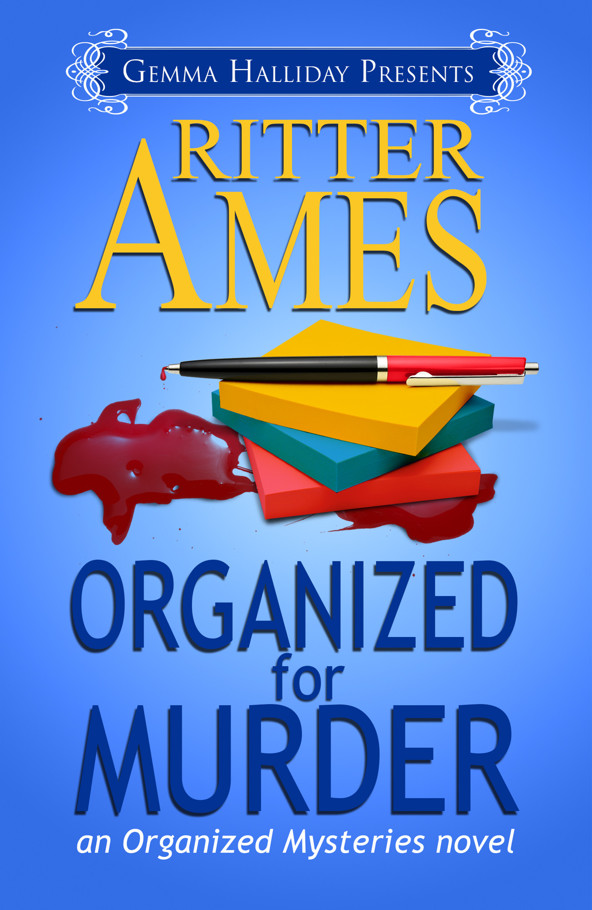 This ebook is licensed for your personal enjoyment only. This ebook may not be re-sold or given away to other people. If you would like to share this book with another person, please purchase an additional copy for each person you share it with. If you're reading this book and did not purchase it, or it was not purchased for your use only, then you should return to your online retailer and purchase your own copy. Thank you for respecting the author's work.

To the best critique group in the world, because you all helped Kate be the best she could be. And to all the other great critique groups out there who tirelessly help fellow authors shape and hone and shine their WIPs (works in progress) into something a publisher wants to release.

REJECT—items un-repairable, missing parts, past expiration, or like half-a-dozen others already in the house.

Completely unload the room or closet, distributing discarded items into correct boxes. Return only "keepers" to the target area.

STACKED IN YOUR FAVOR, LLC,

9:00 a.m. to 3:00 p.m. -- Meet with Miss Amelia Nethercutt at her
mansion
to organize her and her late husband's exotic collections. Magnificent sprawling home and grounds. On phone seemed eager to learn organizational techniques. Says she scrapbooks and keeps a daily journal. Spend time telling how to develop her vision, to make a date with herself each day to keep living space organized and de-cluttered. Also, since she's a collector, offer the "One-in/One-Out Rule" so old replaced item always goes out when new item is purchased.

"On the second day, I decided widowhood was infinitely better than divorce."

"Miss Amelia!" Kate McKenzie caught herself, and her teacup, an instant before the Lapsang Souchong escaped over the gold rim and onto the Aubusson rug. While the cream and sienna tones of the carpet would have accepted the tea stain like a distant relative, such an accident threatened to be an uneasy alliance. Especially as Kate courted this new, and particular, client.

Amelia Nethercutt took the still-clattering china from Kate's hands and settled the pieces on the gleaming rosewood coffee table, then said, "It isn't as if I don't know the pros and cons of both marital dissolution options, my dear. My marriage to Daniel was my fifth, no, sixth marriage. I keep forgetting Joey. And receiving an inheritance is much more liberating than monthly alimony."

Kate stiffened on the white-on-white Victorian sofa and hoped her smile didn't look like a grimace. She again swatted the irritating peacock feather and gilt-streaked twig arrangement that invaded the personal space around her left shoulder. Where had common sense fled when she agreed to work sight-unseen in this procurement madhouse?

Façades could be most deceiving; Amelia's and the mansion's. The woman's exterior resembled that of her home—sweeping luxury and professional styling. Even Kate's first look inside of the house, the foyer with its elegant mahogany collectibles cabinet standing guard against taupe-colored grass-cloth, fooled her.

Then she'd seen this parlor, the study, the bedrooms, the conservatory, the library, and…well…all the other "treasure rooms."

This first workday revolved in a repetitive nightmare of list making, supply ordering, prioritizing, and attempts to stem the overwhelming need to hyperventilate. Even her never-fail categorizing system of R
EJECT,
R
ECYCLE,
R
ESELL,
R
ETURN,
and
R
EVIEW
periodically failed to keep Kate's panic at bay. Finally, for the first time ever, she gave up and began dividing the upstairs by what rooms were wholly trash and which might be salvageable. Of course, this never meant she would actually be allowed to throw out anything, but she persevered. Until Amelia had called from downstairs and said it was time for a "tea moment."

Kate's last ally disappeared as Mrs. Baxter, the Nethercutts' cotton-haired cook, had bustled in bringing the tea tray and placed it near Amelia. "Nice meeting you, dearie," Mrs. Baxter said, before straightening her pink pillbox hat and telling her employer, "I'm going to the market and the drugstore. There's a cab waiting. I'll be back as quickly as I can."

Amelia nodded, pouring tea as she spoke, "That's fine. I left some budgeting papers on the front table for the garden club vice-president. Please drop them off while doing your errands." She had smiled at Kate then and added, "I'm president again this year, you know."

Kate assumed the comment was rhetorical, but offered a smile for insurance.

"The material is out in the foyer," Amelia called to Mrs. Baxter, and as she waved toward the front door her spicy, nose-tickling scent perfumed the air. "I've made some exciting suggestions and changes. They will require a few club members to reflect a bit before complete acceptance, especially our esteemed vice-president, Gabriella Cavannah-Wicker. Your taking the packet will expedite matters admirably, so everyone has adequate ruminative time."

Mrs. Baxter rolled her eyes heavenward behind her thick lenses. She left via the front door, just as Kate performed her teacup juggle in response to Amelia's disturbing pronouncement. A statement particularly unsettling in light of her late-husband Daniel Nethercutt's recent demise.

Amelia picked up the sugar bowl and offered, "There's nothing like a few minutes for tea."

The smoky smelling brew looked dark. Kate added a liberal dose of milk and worried about the exquisite teacup, musing whether the liquid was capable of eating through the fragile porcelain.

Once more she should have listened to her instincts, but, as usual, decided to focus on the positive side and be nice and agreeable. Landing a rich client seemed a godsend for her new organizing business, S
TACKED IN
Y
OUR
F
AVOR
. Besides, it wasn't difficult to believe her initial unease due to the fact only a week had passed since Mr. Daniel drifted off to whatever heavenly reward a compulsive collector deserved. At first, Kate worried Amelia was one of those bereaved spouses who too quickly decided to "clean house." But Amelia insisted. Amelia insisted on everything, and Kate's backbone turned to butter.

In this room alone, the front parlor, majolica plates competed with marble busts and conch shells. A stuffed and seriously flaking crocodile, missing its right glass eye, crouched in one corner. Beside the door, a stack of piano sheet music stood as high as Kate's waist, but she'd yet to find any kind of keyboard instrument in the house. The outdoors was brought inside with a collection of faded garden gnomes simulating hopscotch near an overgrown spider plant.

Jeez!
What had she gotten herself into? Could she even finish the job by the time her first-grade twins graduated from high school? Amelia didn't need an organizational expert as much as a designer with the balls of General Patton. Or a bulldozer.

And how should she respond to a comment contrasting spousal death with divorce? She decided to ignore it and try wiggling out of the mess she'd let her size eight flats walk into. "Miss Amelia, I'm not sure I'm the best person for this job. My business
is
organizing spaces and archiving items. However, you have many precious treasures here needing—"

"Nonsense, Kate. I picked you because you are perfect for this chore." Amelia rose to her full six-foot stature and glided to the bookcase by the door, the silvery silks of her caftan trailing like the wake behind the QEII. "I first met your motherin-law at college," she said, flipping pages of a ragged yearbook as she navigated back. "You couldn't find a woman more in control of things than Jane, whatever the task. So, I knew I had to hire you."

Kate's motherin-law, Jane McKenzie, did indeed know how to keep things in their place, but this did not mean her son's wife possessed superhuman talents. With the elder McKenzies currently finishing a Caribbean cruise, Jane had been unavailable for consultation prior to her daughter-in-law accepting this assignment. Kate opened her mouth to try to explain family ties and genetic capabilities to Amelia, but stopped as the scent of Chanel No. 5 preceded a voice in the hall.

A shadow flitted across Amelia's patrician face, but disappeared so swiftly Kate couldn't be sure she hadn't imagined it.

"Ah, my stepdaughter Sophia." Amelia smiled as she called, "Darling, in the parlor."

Seconds later, a trim figure sashayed into the room and Kate suddenly felt fat and shabby in her working twills. Though no taller than Kate's fit five-and-a-half feet, and brunette to the organizer's blond, Sophia's lean frame and personal trainer-esque, toned body gave the appearance of runway perfect, with no hint of any past pregnancies. Dressed in simple black slacks, a white blouse that whispered money—lots of it—and dark glasses resting atop long, dark tresses, Kate was reminded of a reincarnated Jacqueline Kennedy Onassis. Until the woman smiled. To her knowledge, Jackie O never resembled a cobra when greeting people.

"Sophia Nethercutt-White." The viper strode forward, and extended an impeccably manicured hand. "And you are?"

Kate forced herself to move toward the woman, instead of yielding to an instinct to cower back. "I'm Ka—"

"This is Kate McKenzie, Sophia, dear." Amelia wrapped a protective arm around her shoulders. "You remember my saying I wanted to get an expert to help me categorize and organize. It's time I put this house into working order. I haven't seen dozens of my own things for a decade and can't possibly fathom everything your father collected before our marriage. There are probably untold riches in here."

"No doubt." Sophia raised an eyebrow and turned piercing black eyes on Kate. "I had no idea you were going to act so quickly, Mummy. I would prefer strangers not paw through Father's things."

Gods And Kings by Lynn Austin
Escape the Night by Desiree Holt
The Architect of Revenge: A September 11th Novel by T. Ainsworth
Blood Bound by Devereaux, V. J.
The Shipping News by Annie Proulx
Serial Separation by Dick C. Waters
Agent Bride by Beverly Long
The Keeper by John Lescroart
The Testimonium by Lewis Ben Smith
Say it Louder by Heidi Joy Tretheway
Our partner