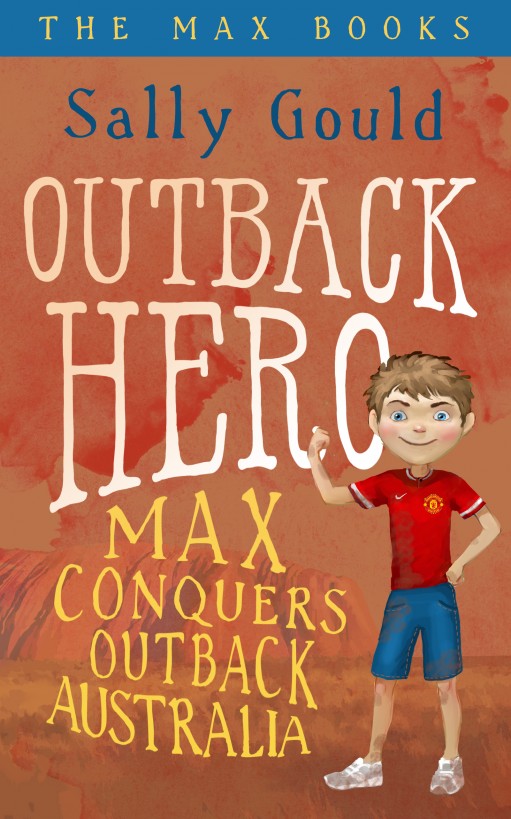 I learned that courage was not the
absence of fear, but the triumph over it. The brave man is not he
who does not feel afraid, but he who conquers that fear.

Other
books by Sally Gould

"
C
rocodiles!" I jumped off
the couch and dropped the remote. "I hate crocodiles. They eat
people and they're ugly."

Charlie, who was doing his math homework at
the dining table, laughed out loud. I knew he was thinking,
Max, go ahead, be a pain in the butt because
that always makes me look good.

Mom pulled dead flowers out of the vase as
though she was angry with them. "Maaax, we've been planning this
holiday for ages. We're going and you'll have a wonderful
time."

"Nanna is going to the Gold Coast—"

Charlie looked up. I bet he'd rather go to
the Gold Coast too.

"You can't," replied Mom. "She's going with
her friends. You'd spoil her fun."

I flopped down on the couch. I hated that. I
hated being a kid. Always being told what to do and never getting
to decide where we'd go for holidays. When I have kids, I'll let
them choose where we go for holidays every year. If my kids wanted
go to Disneyland ten years in a row, I'd take them.

Mom put the dead flowers in the bin, then
came over and sat next to me. She squeezed my hand and whispered,
"We'll only see the crocodiles from the safety of a boat. People
only die from crocodile attacks because they swim where they
shouldn't. They ignore the
No
Swimming
signs."

Could all moms read their kids' minds? My
mom just knows when I'm scared of something. I wondered what else
she knew. Did she know that I listened to music at night when I was
meant to be asleep?

Charlie called out, "Max, you've got more
chance of being killed by lightning than being killed by a
crocodile. In Australia last year, ten people died because they
were struck by lightning and only one died of a crocodile attack.
And if you lived in Africa, you're much more likely to be killed by
a lion."

Typical. He was always trying to impress Mom
with facts and figures. I told him, "I'd rather be killed by
lightning."

"Yeah, being zapped would be electrifying."
He stood up and shook like a bolt of electricity had shot through
his body.

"I hope you don't come," he said as he went
back to tapping numbers on a calculator and writing down figures.
"I'll have the whole back seat of the car to myself. I won't have
to share a room. I can watch whatever I want on TV."

I hated the way he could talk and do math as
though it was as easy as walking and breathing at the same
time.

She shook her head as if I were a hopeless
case. "You know there's nothing to fear but fear itself."

That was one of her favorite sayings. She
said it to me a thousand times a year. She used to say it when I
was afraid of the dark, afraid of the invisible monster hiding in
my wardrobe and afraid of strange noises at night.

Without looking up, Charlie said, "We should
see Kakadu before global warming wrecks it."

Typical. Charlie and Dad reckon we have to
see everything before global warming wrecks it. I bet we'll never
again have a normal holiday at the beach. Now we have to see stuff.
We would've had to gawk at icebergs in Antarctica last summer, but
luckily that was too expensive. "I wouldn't want to see Kak-my-du
even if it didn't have crocs."

"It's called Kakadu National Park," said
Mom. "Thousands of people visit it every year. And I bet most of
those people are terrified of crocodiles. But they still want to
see them in the wild. And there are lots of walks, swimming holes
and waterfalls. The landscape is stunning and there are Aboriginal
rock paintings too." She gave me one of her pleading looks. "Max,
when you were little, you were so brave."

"WERE BRAVE," Charlie repeated, without
looking up.

Mom smiled at me and messed up my hair as if
I were five years old.

"Okay, I'll go," I said. I'd show her how
brave I was. I decided right then that I wouldn't be afraid of
crocs. I'd be brave like Charlie. I was only two and a half years
younger than him, so I should be brave like him. And from now on I
would be. And even if I wasn't, I'd pretend I was.

I
stared out the car
window, unable to believe my eyes. We'd come all the way from one
end of Australia to the other to see this? Outside, everything was
flat and boring - boring and flat. Very flat and very boring.

"You said Kak-my-du was stunning," I said to
Mom.

"We won't be there for hours," she
replied.

I slid down in my seat and tried to block
out the music. It was already turned down because no one was into
it. There was no iPod attachment and we didn't pack any CDs, so in
Darwin Dad said we'd better buy a CD. Not one each; he's too tight
for that. We had to agree on one CD for our whole trip. I knew
straight away that was dumb. Mom likes slow mushy stuff, Charlie
likes rap and I like rock. And Dad - no kidding - loves dance
music. He might be boring and strict, but when he gets in the car
without Mom, he turns up his dance music real loud.

I stared out the window and wondered what my
best friends, Thomo and Chook, were doing right now. Chook was
skiing, so he was probably screaming down a mountain having the
best time of his whole life. Thomo was at home, probably listening
to good music.

Although maybe going to Kak-my-du was better
than staying at home. Darwin had been sort of fun. Except for the
croc farm with millions of baby crocs climbing over each other, all
looking like baby alien monsters with their bulging yellow eyes.
Now we were going into big croc country. The only good thing about
that was Dad hired a white LandCruiser and Charlie and me each had
our own row of seats. That meant he couldn't annoy me.

"Did you know there's usually one croc
attack on a human every year?" Charlie called out from the back
seat. "And so far this year there hasn't been one."

I turned round to him. "Liar."

"It's true," he said. "And human meat isn't
their favorite, but they aren't that fussy. They eat anything that
moves. They can slice us up into small pieces. So they can kill us,
but we're not allowed to kill them."

Mom turned round and glared at Charlie.
"That's enough." She said to me softly, "Max, when you were four
years old, we went to a reptile park and you held a baby croc."

"Its jaws were taped together, so it
couldn't bite," she said. "As soon as the woman asked for a
volunteer to hold it, your hand shot up, and you pushed to the
front and took the baby croc. You were fearless."

Wow. I was fearless.

Charlie said, "I read that if a croc does
attack you, you'd be better off shoving your head into its jaws and
getting the whole thing over and done with. No point dragging out
your own death."

"Oh, Charlie," said Mom with disgust. "I
don't want to hear another word about crocodiles."

I was
fearless
, I said over and over in my head. What happened
between when I was four and now? I didn't know. And it didn't
matter. If I was fearless then, I could be fearless now.

"Here we are," said Dad, pointing to a sign.
He slowed the car to turn left.

The sign read, ADELAIDE RIVER QUEEN JUMPING
CROCS. What?! They jump? I could just imagine a bunch of crocs
jumping into the boat to get their morning snack. I glanced at
Charlie and realized I had to sound calm, because I didn't want him
to know I was worried. "I thought crocs could only swim and slide
along the ground."

"These ones can jump way up in the air." Dad
sounded excited.

My heart began to thump and my mouth dried
up. I wasn't afraid; I was terrified. But I couldn't let anyone see
it. How could I get out of going on the boat? My mind went blank.
Before I knew it, Dad was parking the LandCruiser in the parking
lot near the river.

This was serious. I couldn't get on that
boat. I was too young to die.

"No way," said Dad. "You're coming with us.
I've already bought the tickets." He jumped out and slammed the
door.

Then Charlie climbed over the back seat,
jumped out and slammed the door.

Mom reached over to me and patted my hand.
"Max, that trick only worked when you were little." She began to
get out of the car. "Come on."

Far out! I didn't have a choice. I had to
get on that boat. I followed Mom from a safe distance - just in
case a croc was lurking up ahead.

D
ad was annoyed with me. I
could tell by the way his mouth was twisted. "Hurry up, we're the
last ones to board."

Only then did I see there were two boats. A
nice big safe one and a tiny one that didn't look safe at all. The
big one had two levels and the bottom level was enclosed by glass.
The other one looked so tiny a croc could chomp off half the boat
in one go. "Why aren't we going on the big boat?"

Dad put his hand on my back and pushed me
toward the small boat. "There aren't enough passengers to fill the
big boat. The small boat is better; we'll see them up real
close."

I gulped and stepped aboard. A man in a
white uniform handed me a ticket. "Keep this," he said. "You might
be the lucky winner."

"Thanks." I walked down the aisle and
squeezed in next to Charlie, because he was in the middle of the
boat. Mom was on the side, next to the water - closest to the
crocs. And she liked telling me to be careful. I sat on my hands in
case they were still shaking.

Three kids sat in front of us. They were
sitting the opposite way to everyone else and were facing us. There
was no way I was going to let them know that I didn't want to be on
this boat. The girl was already asking Charlie questions. She was
sort of pretty and her hair was very long. I could tell she liked
him by the way she was playing with her ponytail. Girls just liked
Charlie. I didn't know why. Maybe girls couldn't tell he was a
know-it-all smarty-pants. Or maybe girls like know-it-all
smarty-pants boys.

Hunting the Hero by Heather Boyd
Compass by Jeanne McDonald
Mr. Peanut by Adam Ross
Belong to Me by Shayla Black
THAT MAN 5 (The Wedding Story-Part 2) by Nelle L'Amour
Dying Fall, A by Griffiths, Elly
OUTNUMBERED volume 1: A Zombie Apocalypse Series by Robert Schobernd
Purebred by Patricia Rosemoor
The Eyes of Heisenberg by Frank Herbert
The Lost Boys Symphony by Ferguson, Mark
Our partner