Read Outside In Online 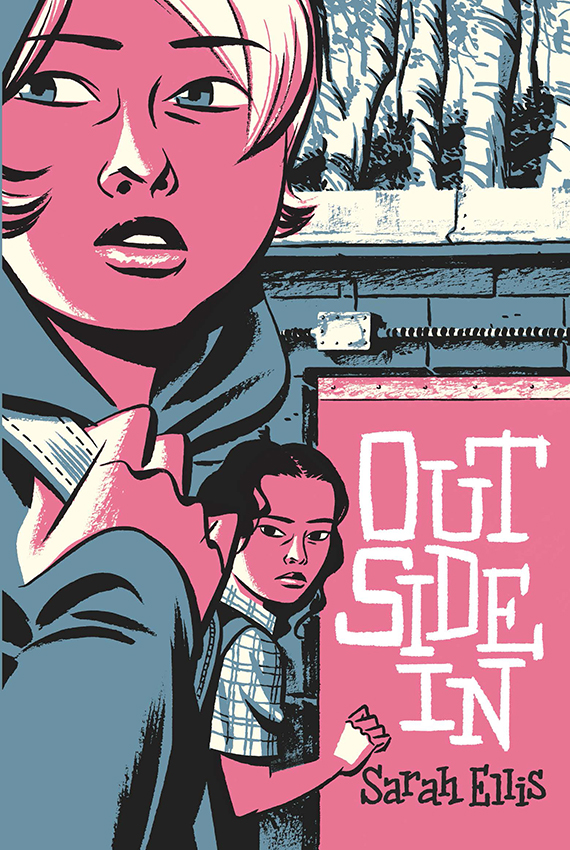 All rights reserved. No part of this publication may be reproduced or
transmitted in any form or by any means, electronic or mechanical, including
photocopying, recording, or any information storage and retrieval system, without
permission in writing from the publisher.

Distribution of this electronic edition via the Internet or any other means
without the permission of the publisher is illegal. Please do not participate in electronic
piracy of copyrighted material; purchase only authorized electronic editions. We appreciate
your support of the author's rights.

We acknowledge for their financial support of our publishing program the Canada Council for the Arts, the Government of Canada through the Canada Book Fund (CBF) and the Ontario Arts Council.

Outside in / Sarah Ellis.

For Cole, Julia and Grace

“
Sweet color
of the sound of you â¦”

Lynn pulled the music out of her ears. What was going on downstairs? Was Clive building something?

Voices pushed into the room, Shakti and Clive, not the words but the anger of it, the unmistakable final chorus of a full-blown fight. It wasn't unusual to hear her mother at triple forte, but Lynn had never heard Clive that loud.

She glanced at the crowded bookshelf.

The bedroom door rattled as the pressure in the house changed. Somebody had left. Lynn slid out of bed and peered through her blinds.

Clive. The top of his head. Three giant steps and he was in the car.

What? He didn't walk around and do the circle check? Clive
always
checked for stray cats and toddlers on tricycles. Not this time. He peeled into the road and was gone.

The tinny sound of Synesthesia escaped from under the duvet. Kapok remained in a state of inert plush.

Lynn rubbed her eyes. It was way too early to tune in to a new Shakti drama.

“
Clive will be
back. He needs time to process. He and I are just at different stages on our journey â ”

Lynn grabbed the nearest thing, a battered copy of
Affirmations for Wholeness
, and slammed it down on the table. Plates rattled. The jar of honey danced toward the table's edge, threatening suicide.

“Why don't you just take every good thing in your life and flush it down the toilet?”

Shakti leaned across the strewn newspaper and sticky crumbs, reaching for Lynn's hand. She had the eager, sparky look that she got during big juicy emotional scenes.

“Oh, Sixer, I hear that you're angry. Isn't it good to express it? Share what you're feeling.”

Sixer was the nickname from Brownie days. Shakti had thought it was so cute that Lynn wanted to join Brownies, a paramilitary, post-colonial organization that propped up the patriarchy or some such thing. Lynn had just liked the uniform and the badges and the reliable tidiness of it all. She had liked being a sixer. Calling Lynn Sixer was a peace offering.

Thought balloon:
You are so full of crap
.

Lynn screeched her chair back, stood up, grabbed her jacket and pack and headed toward the door.

“Lynn. Wait. Where are you going?”

Thought balloon:
To score some dangerous drugs and have unprotected sex with a stranger.

Lynn's favorite
study carrel was free. She sat down, emptied some random objects out of her pack to establish territory and turned to stare out the window.

Had Shakti's revelation been a surprise? No. Things added up. Or, rather, things that didn't add up became clear.

There were those strange phone hang-ups and last-minute cancellations of plans because one of Shakti's friends was having a crisis. It seemed like every week she was all over some new thing. Since when did Shakti care about Bosnian hip-hop? There was the three-day skills-upgrade workshop, the workshop that Shakti said she took that weekend of the transit strike. Somehow she made it across three municipalities to get there. Lynn remembered Clive at the dinner table. “But there
weren't
any buses.” And Shakti doing her flirty thing: “Oh, don't be tiresomely literal.”

Then there was the barbecue with the staff from the extended-care home where Shakti worked, the barbecue where, as it turned out, the whole thing started. Did Lynn remember some nurse's husband named Brandon? No. What she remembered was how her mom was that day â wound up, a little crazy, like a preschooler on top of a sandpile, legs apart, air-punching, the king of the castle.

In the car on the way home that day, Shakti got more and more jangly, her hands whipping up the air, as the back of Clive's head got more and more frozen. Lynn remembered telling herself that it was okay, that Shakti was just happy and wasn't that better than angry or flat?

And, finally, the email. The email to Brandon (
Brandon
, stupid name) that Clive found this morning. Of course it was an email. Shakti always left yawning cupboards and clothes-erupting drawers in her wake. Why would she clean up her mailbox?

Lynn gnawed at a hangnail. A cup of coffee wafted by the carrel. She pivoted in the comfortable library chair and looked out the window. Was that gray smear of a cloud moving?

What if Clive had really gone? For good. What if it was just her and Shakti again? The past five years â the Clive years â had been so ordinary. Milk in the fridge, friends over to play, money for school trips, air without jangle, a mother you didn't have to read for signals of a meltdown. They had lived at Clive's townhouse all that time, the longest they'd ever settled anywhere. Five years in one school. A clothing allowance. A bus pass. Cable. Picking a paint color for your room. Actual holidays where you went away in the car with a cooler and stayed in motels and, like, visited the dinosaur museum and you could take a friend and the parents of the friend were okay with that because Clive was so obviously the kind of person who did the circle check. And Shakti had taken a course and gotten a job and started to seem more normal. Lynn had let herself believe that her mom was the leopard who
could
change her spots.

Somewhere out of sight a little kid was singing a private three-note chant.

Before Clive. A memory came sneaking back. They were living in a house with other people. Was that the year of Geoff? Was that the house where the mean boy cut off one of Kapok's ears? Or was that another house? Shakti was sitting on a blue couch, the one that was good for jumping on. She was rocking and crying, crying with gulping. Flowers always made Shakti happy. There were flowers next door. Lynn went to pick them but just when she had a big bunch, the next-door man came into his yard and yelled at her. He had an ogre voice. Then Shakti came out and yelled at the man and there was too much scary yelling. What was the end of that story?

And then Clive came. All of Shakti's other boyfriends, you couldn't let yourself like them too much because they always left. Except for Clive. Except for maybe now.

A text message pinged her into the present.

It was Kas. She and Celia wondered where Lynn was.

Kas and Celia.The friends. Clive called them the Diode.

Lynn's need for them flowed right out of her fingertips. She needed to tell them.

“
But what
happened?” Celia snugged her chair close to the study table.

At the prospect of putting it into plain words, Lynn felt grubby. “Oh, it's all completely reality TV. She's like somebody pulled out of the audience of some bad talk show. She's been having, like, an âaffair' with the husband of one of the nurses at work. He's young, just married. They have a new baby. The guy's name is Brandon.”

“Brandon.” Kas scowled. “What a douche.”

Celia flinched. Lynn gave her an It's-okay look. Kas's range of insults had recently become more colorful, and Celia was obviously having a hard time keeping up. As usual, she took refuge in wide reading and statistics.

“But more than half of married couples have an affair over the course of their marriage. Most just put it behind them and move ahead, with the help of professional counselors.”

Kas looked unconvinced. “Where did you read that?”

“Magazine at the orthodontist.”

Lynn loved the Diode, but they didn't seem to be getting it. The person to be mad at was not Brandon, who hardly seemed like a real person at all, but Shakti. Shakti with her stupid affirmations and that little blissed-out smile that she had adopted â a smile that just made you want to shake her, shake her back into the real world.

“Look. The point is not Brandon or married couples. The point is that Shakti has no intention of putting it behind her. She thinks Clive is just going to adjust.”

“That's the idea. She thinks she'll just go on with Clive and add Brandon. She thinks it'll be â¦” What was that hideous Shakti word? “Enhanced.”

“Get out.” Kas shook her head.

“But â¦” Celia looked as though she hadn't ever read a magazine article about this situation. “What about Brandon's wife? Your mom works with her, right? Does she know?”

“Well, obviously not,” said Kas, forgetting to use her library voice. “Oh, sorry, Lynn. I don't know. Does she?”

“No, but Shakti thinks Brandon should tell her because then somehow that will just fit into her plan of enhancement.”

Lynn translated for Celia. “Yeah, bad. You know, I didn't even want to know about all this stuff. She just made me listen to it. You know what she's doing? She's showing off.”

It fell out of Lynn's mouth before she knew she knew it. That was it. Shakti was that kid on the sandpile. Look at me! I'm being bad!

The Diode was silent. Kas pulled a bag of toffees out of her pack and passed them around.

“
Celia
. Lynn is having a crisis here. The least you can do is eat a toffee.”

For once, Celia ignored Kas's complete lack of logic. She grabbed one, ripped off its paper and stuffed it defiantly into her mouth.

Kas and Celia. They had adopted her that first day at her new school, a kid with a weird mom, a pretend-tough eight-year-old who had almost given up trying to make friends.

Kas cut to the chase. “Do you think Clive will come back?”

Lynn thought of the car reversing onto the road. Clive never bailed. Even during the Parent Advisory Council disaster, when Shakti got in some fight with the president and decided to sue and then had to quit her job because of stress and spent months sitting on the couch writing angry emails to all the parents and teachers, Clive hung in.

The toffee was suddenly disgusting, that sweet-before-sick taste.

Kas cracked her toffee between her teeth. “Will he still be, like, your dad?”

Celia jumped in, a family lawyer in the making. “Of course he will. They were in a common-law relationship. There can be joint custody, child support, all kinds of different arrangements â ”

Kas put her hand over Celia's. “Celia. Shut up.”

Lynn ejected the toffee back into its paper. “About Clive? I just don't know.”

The opening notes of
“Whistle” bubbled up from somewhere deep in Celia's backpack. She squinched up her face.

They gathered their stuff. As they left the library, Kas tucked the bag of toffees into Lynn's jacket pocket.