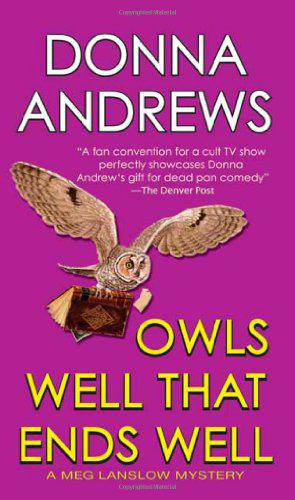 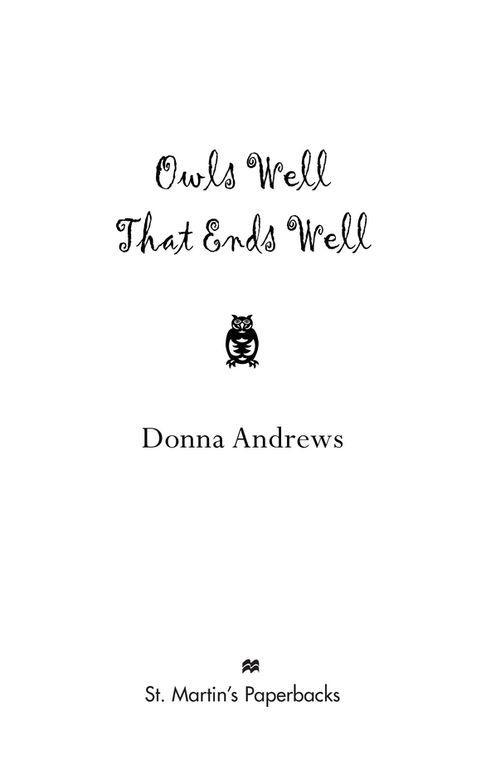 For Dad, who inspired Meg’s dad, and still inspires me

To the folks at St. Martin’s/Minotaur who make this all possible—to Ruth Cavin for all her guidance and support, and for never letting me get away with less than the best book I can write; to her assistant, Toni Plummer, for her efficiency in keeping the book on track; and (long overdue) to the art department for doing such wonderful covers with whatever bird I foist upon them.

To Ellen Geiger and Anna Abreu at Curtis Brown for taking such good care of the business side of my writing career, so I can do the fun part.

To the friends who critiqued the manuscript—as usual, on short notice, during busy times in their own lives: Ellen Crosby, Kathy Deligianis, Suzanne Frisbee, Dave Niemi, and Rosemary Stevens.

And to the readers who take the time to tell me how much they like reading about Meg and her family. Sometimes, when real life seems determined to interfere with your writing, it really does help knowing that someone out there is waiting impatiently to see what happens next.

When the doorbell rang, I stumbled to the still-dark window and poured a bucket of water where the front porch roof would have been if it hadn’t blown away in a thunderstorm two weeks ago.

“Aarrgghh!” screamed our visitor. A male voice, for a change.

Ignoring the curses from below, I poured another gallon jug of water into the bucket, added a scoop of ice cubes from the cooler, and stationed it by the window before crawling back into the sleeping bag.

“I have an idea,” Michael said, poking his head out from under his pillow. “Next time let’s just hire someone to do this.”

“There won’t be a next time,” I said. “We are never, ever having another yard sale.”

“Works for me,” Michael said, disappearing under the pillow again.

Within thirty seconds I heard the gentle not-quite-snores that told me he was fast asleep.

A point in Michael’s favor, the non-snoring. The list was long on points in Michael’s favor and very short on flaws. Not that I normally keep ledgers on people, but I suspected that after several years together, Michael was tiring of my commitment phobia and working up to a serious talk about the “M” word. And no matter how much I liked the idea of spending the rest of my life with Michael, the “M” word still made me nervous. I’d begun making my mental list of his good points to defuse my admittedly irrational anxiety.

Not something I needed to worry about right now. Now, I needed to sleep. I settled back and tried to follow Michael’s example. But I didn’t hear a car driving away, which probably meant our caller was still lurking nearby. Perhaps even trying to sneak into the yard sale area. I wished him luck getting past our security. But odds were he’d eventually ring the doorbell again. Or another early arrival would. If only someone had warned me that no matter what start time you announce for a yard sale, the dedicated bargain hunters show up before dawn.

My family, of course, had been showing up for days. Every room that had a floor was strewn with sleeping bags, and my more adventurous cousins had strung up hammocks in some of the floorless rooms.

From downstairs in the living room, I heard the thumping of Cousin Dolores’s morning aerobics and the resonant chants Cousin Rosemary emitted while performing her sun salutations. Perhaps this morning they would both keep to their own separate ends of the living room. If not, someone else would have to restore peace between East and West today.

Michael was definitely fast asleep again. What a wonderful gift, being able to fall asleep like that. I felt envious.

Just envious, the cynical side of my mind asked. Not even a teeny bit resentful? I mean, it’s no wonder he can sleep so soundly. He hasn’t spent every waking moment of the last two months getting ready for this weekend.

In late August, we’d bought The House—a huge Victorian pile, three stories high plus attic and basement, with three acres of land and assorted outbuildings, including a full-sized barn equipped with a resident pair of nesting owls. The only way we’d been able to afford it was to take the place “as is,” which referred not only to the property’s run-down condition, but also to the fact that it still contained all of the late Edwina Sprocket’s possessions. And Edwina had been a hoarder. The house had been merely cluttered, the attic and basement downright scary, and the barn … apparently when the house became overcrowded, she’d started shoving things into the barn. When she’d run out of space on the first floor of the barn, she’d placed a ramp up to the hayloft and begun pouring junk in from above. She’d filled the barn and moved on to the sheds by the time she’d finally died, leaving her various grandnieces and grandnephews with a hideous clearing-out job that they’d avoided by selling the place to us. “As is.” With a clause in the contract entitling them to ten percent of whatever we made by selling the contents.

Eventually, I assumed, I would come to share Michael’s conviction that this was a marvelous deal. Perhaps tomorrow evening, when the yard sale was history. Right now, I just felt tired.

I heard a car engine outside. Probably another caller heading for our doorbell.

I crawled out of the sleeping bag and stumbled over to the window. I rubbed my eyes, opened them, and found myself staring into the pale, heart-shaped face of one of our resident barn owls, sitting on its favorite perch, a dead branch in the oak tree just outside our window. Apparently I’d interrupted its bedtime snack—the tail of an unfortunate field mouse dangled from its mouth.

“Ick,” I said. “Are you trying to put me off spaghetti for good?”

The owl stared at me for a few seconds, and then twitched its head. The tail disappeared.

“That branch has got to go,” I said, to no one in particular. Certainly not to the owl, who wasn’t likely to give up his customary feeding station simply because I objected to having our front porch whitewashed with owl droppings and sprinkled with leftover rodent parts every night. Perhaps I could delegate the branch removal to one of the many uncles and cousins who kept asking what they could do to help, assuming I found one who could be trusted with sharp implements.

Just then our latest caller rang the bell, and I emptied the bucket out the window, still staring at the owl.

No screams or curses this time. Only a very familiar voice.

I closed my eyes and sighed.

I stuck my head out of the window, startling the owl into flight. A very wet Dad stood on our doorstep. Water beaded on his shiny bald head, and he was trying, with his chin, to brush several ice cubes off the stack of boxes in his arms.

I pulled on jeans and a sweatshirt and headed down the hall for a quick visit to the bathroom. But when I was still ten feet away, a bathrobe-clad man carrying a bulging shaving bag emerged from the last bedroom on the right, waggled his fingers at me cheerfully, and disappeared into the bathroom.

The only bathroom on this floor. Chalk it up to lack of caffeine, but I was so irritated it took me a few seconds to realize that I had no idea who the heck the man in the bathrobe was.

Yet another visiting relative, obviously. But no one I recognized. I thought I knew all the relatives who’d invited themselves to stay at the house. I racked my brain to figure out which aunt or cousin might have brought a new husband or boyfriend along.

Meanwhile, I headed for the third floor bathroom. I reminded myself that this was a temporary inconvenience. First on our long list of remodeling projects was creating a real master bedroom suite with a private connecting bath. And we weren’t inviting any more houseguests until we’d solved the bathroom shortage.

Just then I heard the strains of Puccini’s “Un Bel Di Verdremo” wafting down from the third floor, which meant that Mrs. Fenniman, another visiting relative, had taken possession of the bathroom for her usual long and tuneful ablutions. I went downstairs instead.

I followed voices to the kitchen. Apparently someone else had let Dad in. He’d put on water for coffee and was sitting cross-legged on the kitchen floor, sharing his doughnuts with my brother, Rob, and a petite middle-aged woman who looked vaguely familiar—although it was hard to tell, because she was wearing a set of Groucho Marx glasses, complete with the fake nose and mustache.

The bathroom off the kitchen was, of course, occupied. But since it was only a half bath, turnover should be faster than upstairs. I stationed myself by the door.

“Morning, Meg,” Dad said, raising a cloud of powdered sugar as he waved at me. “You remember your mother’s cousin, Emma. From Wichita.”

Emma nodded, and raised her Groucho mask briefly so I could see her face. She wasn’t wet, so I deduced she’d come in with one of the family instead of ringing the bell.

“Mother said her relatives were coming from all over for the yard sale,” I said. “But Kansas?”

Whatever Emma started to say was drowned out by the loud thud and subsequent howl of agony from the bathroom.

“Claude!” Cousin Emma shrieked, and leaped toward the closed door.

“I brought my medical bag,” Dad said. Though semiretired, Dad kept his state medical license current so he could treat family, friends, and victims of interesting accidents—like the one happening behind the bathroom door. Though once angry curses and loud thuds replaced the howls, I deduced it wasn’t a serious one.

“See if you can open the door,” I called to the bathroom’s unlucky occupant.