Read Own Her Online 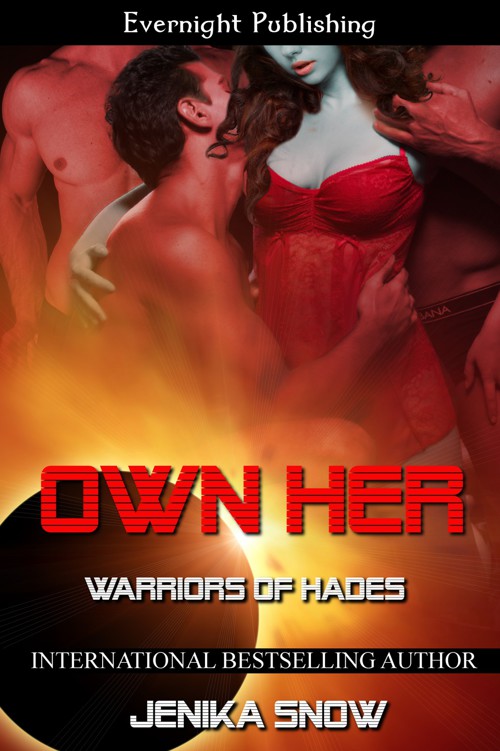 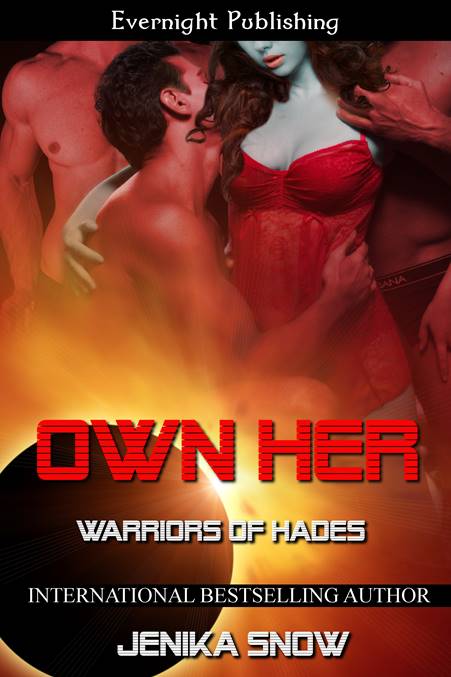 I want to thank the readers
for their continued support. I want to say thank you to
Evernight
for being so great in everything they do. And last but not least, thank you to
my family for being behind me in my endeavors every step of the way!

Mekenna
sat at the foot of her Master’s
bed, the sound of him fucking two
Bohela
alien
females filling her ears. The fact that her Master,
Hecktar
,
was not only her owner, but also her father was not uncommon in the world she
lived on. She was the child of a slave and Master union, one where her humanoid
alien father had raped her human mother, and
Mekenna
had been the product. But her mother was dead, having passed away during
childbirth, and
Mekenna
now took the place of her
Master’s servant. Thank the heavens he didn’t sexually touch her, but he did
make her witness his perversions on a nightly basis, made her bathe him, serve
him food and drink, and do any other kind of manual and degrading work he
deemed fit. She was his lapdog, his bitch to do with as he pleased, and
although freedom was her dream, her fantasy, she also knew that she most
likely
wouldn’t survive out there in the world alone.

She
had no money, and aside from the clothing her Master gave her daily she had
nothing to her name. But even so she dreamed about not having a steel collar
around her neck, of not having to be chained up at night and made to sleep on a
pallet of
Gellah
feathers that were far too coarse
and thick to be of comfort. She was a prisoner in her own body, and in her
world. Not even the rare human species looked at her as someone of their kind.
Her father, a
Cellulion
, had lightly tinted blue
skin, and aside from their different colored flesh, and the bright, almost neon
blue eyes,
Cellulions
appeared human in form.

Mekenna
stared at herself in the shiny
glass reflection shield across from her. She had never seen her mother, didn’t
even know what she looked like, but she thought she took after her in
appearance. Aside from her faintly tinted blue skin,
Mekenna
didn’t look anything like her father and Master. Her hair was the color of the
darkest oil in the
Sheepa
Lake, and her light green
eyes had to be from her mother’s human genetics. But
Mekenna
knew that even if her mother had survived, she wouldn’t have been able to keep
Mekenna
as a mother did with their children. This world,
Sessinea
, was a planet filled with wealthy slave owners,
held the largest slave and sex servant auctions in the galaxy, and did not
allow paternal and maternal bonding. Any children produced on this planet were
the result of Masters impregnating their slaves, hence creating more slaves.

“Clean
the sleeping platform, slave, and then leave my sight for the remainder of the
night,” her Master said. He didn’t see her as his child, and he certainly
didn’t treat her as though she shared the same blood. But
Mekenna
didn’t want to be claimed by him as a father. He disgusted her, was vile and
horrible in the way he treated others. He was wealthy, and she knew the females
he came in contact with desired him for his handsome good looks and strong
physique. On the outside he may be attractive, but on the inside he was
disgusting, ugly, and she hated everything he represented.

After
she cleaned the platform one of the guards grabbed the chain attached to her
collar and started pulling her out of the bedroom.

She
was jarred to a halt, and turned to face him.

“You
will accompany me to the auctions and tavern tomorrow evening to purchase
another servant.” And then he turned his back, telling her he was finished
speaking with her.

The
guard took her to her cell, activating the door, and when she was inside he
chained her to the wall and closed and locked the door behind him as he left.
The door was transparent, and although it looked as though she could walk right
through it, the truth was if she tried she would get an electrical shock that
made her unconscious.
Mekenna
moved over to her
pallet in the corner, sat down, and pulled her legs up to her chest. She was an
outcast in this world, and the only person she had was herself.

The
following morning before the suns had even
risen,
she
stood and cleaned out her cell, was led into her Master’s chamber, and cleaned
out the rest of the remnants of his sexual encounter the previous night. The
room was filthy again, even though she had cleaned it spotless before she had
been forced to retire to her cell. She went about her tasks of daily chores,
and although there were robotic aids to help in the cooking and cleaning, her
Master preferred for her to help out with the manual labor. She knew it was a
punishment for the fact that she was female who shared his bloodline, and
because overall he was one nasty asshole. But she kept her mouth shut and did
her work.

After
she had finished cleaning, she headed to the kitchen to prepare Master’s meal.
She grabbed the tray, headed into her Master’s room, and saw him seated on the
chair beside his desk. The balcony doors were open, and the sight of the sky
just feet from her tempted her with freedom.

“On
your knees, slave,” he said without even looking up from his information
tablet. The holographic image was projected right in front of him, showing the
newest Stoker Galaxy updates.

She
went to her knees, balanced the tray on her thighs, and proceeded to feed him
with her fingers. For the next twenty minutes she picked up the thickest,
biggest pieces of meat for him, and then went on to the juiciest and ripest
pieces of fruit. He didn’t speak, didn’t even acknowledge her aside from
opening his mouth when she offered him food. When he was finished with her
presence he waved her off, turned his back on her, and she let herself out of
his chamber.

Two
hours later and she was finished with her chores, and was led to her chamber by
one of the guards. After she was tethered to the wall she
Mekenna
stared out of the open balcony entrance with the electrically charged
transparent bars. She stared at the dual suns rising above the green
Oppnahla
Mountains, at the splendor and beauty of them, but
knew she’d never experience their freedom. The buildings that covered this
planet hovered high above the earth, away from the lush green forests and
grounds, the bright yellow rivers and ocean, and even the animals that occupied
the terrain. The air this high up used to be clearer, cleaner and crisp, but
was slowly starting to become even more polluted because of the spacecrafts
that came through the atmosphere. The hazy covering of blue clouds that lined
the sky had her imagining that she wasn’t trapped in this lavish and expensive
prison. She could imagine she wasn’t going to have to live out the rest of her
life in servitude, raped when a guard thought he needed release, and didn’t
care if she was willing.

Closing
her eyes she pictured herself with a husband, a male that treated her with
respect because she was his equal. She wanted to be cherished and loved, and
shown that just because she was deemed a weaker and inferior gender and hybrid
species she was still the one that he craved the most. She wanted a
child,
many children in fact, wanted a life outside of these
beautiful prison walls, too.

But
Mekenna
knew that she was not living in a dream
world. She would never have any of that, but dreaming was her escape, even if
just for a moment.

“Sleep,
Sevla
,
because you have more work to do.” one of the guards called out, using the
derogatory term for female slave on this planet.

Yes,
this was her life, a living hell, but she was alive, and for that she was
thankful.

Viktor
watched at the
Duamba
female as she
gyrated
her hips, smoothed her hands over her glowing green
and yellow flesh, and stared at him and his brothers. They were at their last
stop before they headed to
Sessinea
for the auctions.
They had come into their breeding need, the desire to find a woman that was
compatible with their species for procreating. As long as she could bear them
strong warrior sons, her species did not matter. But it wasn’t just about
having a female that would give
them
offspring. It was
also about claiming her, marking her as theirs, and spending the rest of their
lives showing her that she was the most important thing to them. Because they
had no females on their world of Hades, a planet filled with lava, fire, jagged
rocks, and creatures that were more hellish than most in the Stoker Galaxy,
they had to travel outside of their world to find females to be with. Viktor
and his brothers tended to stay in the surrounding planets that were close to
Hades. They did so to release their seed in the bodies of willing women that
would be considered loose, but the brothers were now ready to settle down. They
needed to have a family, to create a world within their world that would carry
on their lineage.

Southern Men: Ballad of a Texas Rose by Kane, Carla
The Hero's Guide to Saving Your Kingdom by Healy, Christopher
Strung Up: A Blacktop Cowboys® Novella by Lorelei James
Speedy Death by Gladys Mitchell
Surviving The Biker (Motorcyle Club Romance) by Alexandra, Cassie, Middleton, K.L.
Tease: A Stepbrother Romance by Daye, Veronica
The Darling Dahlias and the Eleven O'Clock Lady by Susan Wittig Albert
Off Duty (Off #7) by Sawyer Bennett
Taken by Abel, Charlotte
The In Death Collection 06-10 by J D Robb
Our partner