Read Owning Up: The Trilogy Online

Owning Up: The Trilogy 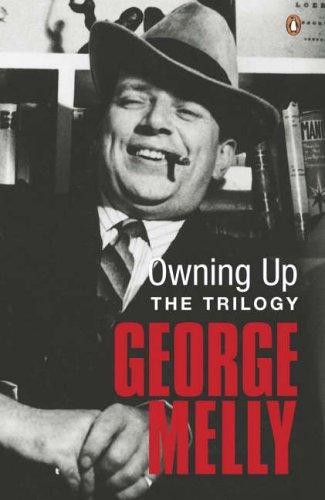 OWNING UP: THE TRILOGY

George Melly was born in Liverpool in 1926. He made his name in the jazz revival scene of the late 40s and 50s, singing with Mick Mulligan’s band. In the 60s he became one of the UK’s most ubiquitous critics, writers and TV personalities, and for fifteen years he wrote the storylines and balloons for Wally Fawkes’s (Trog) comic strip
Flook.
He has published a great number of books, including his acclaimed four volumes of autobiography:
Slowing Down
(2005),
Owning Up
(1965),
Rum, Bum and Concertina
(1977) and
Scouse Mouse
(1984);
Revolt into Style
(1970);
Paris and the Surrealists
(with Michael Woods, 1991);
Don’t Tell Sybil,
a memoir of the Belgian surrealist E. L. T. Mesens, and his fishing memoir,
Hooked
(2001). Today he can be found singing with the trumpeter Digby Fairweather. In 2004 he was honoured with the Lifetime Achievement Award at the BBC’s Jazz Awards.

OWNING UP: THE TRILOGY

With a new introduction and afterword by the author

For Kezzie soon and Django eventually

Published with a new introduction and afterword as a Classic Penguin in one volume under the title
Owning Up: The Trilogy
2000

Naturally I was thrilled, opening a dull post one wet February morning, to find a letter from Penguin UK offering to reprint in one volume my three separate autobiographies as part of a new series.

They told me later that the book’s title is
Owning Up
–
The Trilogy.
This seems to me a neat solution.
Owning Up
was in fact the title of my first book, the one describing the jazz world of the fifties, but the title is equally, if not more, applicable to
Rum, Bum
and Concertina,
about my naval life in the forties, and indeed it seems to me that almost any autobiography, if free of hypocrisy, cant or special pleading, might be called
Owning Up.
It is surely what a writer in this genre should aim to do.

The less agreeable aspect of the otherwise encouraging letter was that I was expected to write a 1,000-word introduction. I have in the past contributed several prefaces, and have never found it at all intimidating. One’s own writing is another matter. To pass a subjective evaluation would force me to strike either self-deprecating or mock-modest Anglo-Saxon attitudes, and to avoid this essentially English predicament – for Celts, the French and, above all, the Americans suffer no such inhibitions – I will remain as objective as possible, leaving any subjective judgement to others. A cop-out!

The three volumes are printed here in chronological order – Liverpool childhood, naval service, the fifties jazz world – and there’s no reason not to read them in that order. In fact, though, they were written in reverse: jazz life, bell bottoms, mewling and puking, and with quite long and irregular gaps in between; they took 19 years
in toto.
So, I write slowly, but why in reverse? I’m quite often asked this and tend to fall back on an aphorism I happened on just in time to quote it on the cover of
Scouse Mouse.
It read: ‘Life is lived forwards but understood backwards.’ I’ve no idea who wrote it, or where I read it, but it came in handy. Nor can I decide if it makes sense or just sounds as if it did. One thing I do know – it had nothing to do with the order in which I wrote my three books.

At the beginning of the sixties, regularly employed inventing the plots and dialogue for Wally ‘Trog’ Fawkes’ strip cartoon ‘Flook’ in the
Daily Mail,
and fulfilling other commissions including a lot of work for the BBC, I decided to leave the jazz life and see if I could earn a living through my pen.

This decision more or less coincided with my taking up with my second and indeed current wife Diana, preceding this by only a week or two but somehow proving the certainty of chance. As an envoy to the band wagon I had contributed to
Vogue
an article describing ‘A Weekend in the Jazz World’ and asked Di if she thought it might expand into a book. Her response was to arrange a lunch with the publisher, her friend George Weidenfeld. George was famous for asking everyone he met to write a book for him but, unlike most of his invitees, I eventually did.

It was much harder than I had thought and I might well have jacked it in if the opening chapters hadn’t been very highly recommended by a reader who turned out to be the late Julian Jebb. Thus encouraged, and rattling with Drinamil, I eventually delivered it and it was published as
Owning Up,
with a cover and illustrations by Wally ‘Trog’ Fawkes.

George was nervous of it. Despite the successful outcome of the Lady Chatterley trial, he worried about the four-letter words and sexual couplings – both minimal by today’s standards – and to hedge his bets he didn’t offer me one of his lavish launch parties. Diana and I were really pissed off about that.

In the end, apart from a predictably sour dismissal by Philip Larkin, it was well received, and George, emboldened, commissioned a second volume. For a time I couldn’t decide on a subject, but then my mother, who was moving to a smaller flat, asked me if I had any use for a large box full of the letters I’d written to her from the Navy. Painfully slowly, I composed
Rum, Bum and
Concertina,
this time without chemical aids.

Given the change of climate, and despite its largely homosexual theme, George was this time far less jumpy. The only thing that embarrassed him was the title, a problem he surmounted by running all the words together so that it came out as
Rumbumandconcertina.
This time we got our launch party.

George came back for a third helping and I will always be grateful, despite my affectionate mockery, for his faith in me.

With my mother becoming senile and my father long dead, I decided to go for my childhood.
Scouse Mouse
is indeed my personal favourite and was the easiest to write. I don’t know why the events of over sixty years ago should be so much clearer than those of yesterday afternoon, but they are. It is also why Diana insisted that the book should be subtitled ‘or I never got over it’, and she and my son Tom kept a beady eye open for deeply purple passages. These became known as ‘squirrels’ bones’, a deleted image and the most shaming example.

When first published, all three books were well received, but that was then and this is now. I hope the jokes hold up and the period detail is of some interest.

To avoid hubris I find it effective, Hamlet-like, to stare at the metaphorical skull of a once well-regarded writer. There are plenty of them knocking around the literary graveyard. Hello Angus. How’s it going Colin? Well, I’ll soon find out, won’t I? And that’s it then.

Place of birth: Liverpool Year:
1926.
1 was bom a fortnight late during an August heatwave.

This took place neither in hospital, nor in my parents’ tiny flat in Linnet Lane, but a mile away in my grandfather’s large house, The Grange, on the banks of the Mersey. I was a rickety-looking baby with a wobbling head and didn’t take kindly to my mother’s milk. It turned my stools bright green and I had to be weaned on Cow & Gate. I survived however and the Mellys were delighted. It seems to me odd that they should set such store on an heir in the direct line. There were no large estates to inherit and the money they left was always divided equally between sons and daughters.

Great-aunts Eva and Florence in their black, floor-length dresses came to view me a day or so later and I was carried out of the bedroom by the midwife for their inspection. My mother called for them to come and see her but they refused. According to their Victorian conventions it would have been improper to visit a woman so soon after an ‘interesting event’.

Rather subdued at her breach of etiquette, my mother heard Florence remark to Eva in respect of me: ‘What a good thing he’s a Melly!’

My great-great-grandfather, André Melly, was born in Switzerland in 1802. He could trace his ancestry back to the early sixteenth century when one Jean Colombe had a son called Matthieu who later, for reasons connected with becoming a burger of Geneva, changed his name to
‘Mesley ou Melly’.
Family legend held that Jean Colombe was the son or grandson of a Genoese pedlar, in itself not much of a
cachet
except that he was meant to be a direct descendant of Christopher Columbus. Certainly, to substantiate this rather nebulous claim, the family crest is a pair of doves’ wings while the shield depicts a dove in an azure sky hovering above a ship sailing towards the setting sun. The motto, with no especial relevance, maintains that ‘A Good Name is Better than a Golden Girdle.’

André Melly seems to have been an amiable young man, if a little solemn. In his youth he was touched by the scepticism of Voltaire, and revolutionary enough to have incurred the displeasure, through some remarks overheard at a cafè table, of the Neapolitan Government. For several years afterwards, when travelling on the Continent, he was closely watched by secret police and put to some inconvenience. He later regained his faith and became a model of propriety.

In the 1820s he emigrated to England and engaged in business, mostly in Manchester and Liverpool. His probity was such that, during the financial crisis of 1825-6, he was able to ride out the storm supported by considerable loans from friends, secured without interest. He eventually married a Miss Grey, whose father was his partner, and became a naturalised citizen through a special Act of Parliament, as was necessary in those days. He suffered from migraines, played the flute adequately and was a keen entomologist; a collection of beetles he assembled and mounted is still in the museum at Geneva. An engraving reveals a marked resemblance to Schubert: curly hair, small round glasses and a stock.

His business, which was to extend to railways, was at first confined solely to cotton. He had dealings with America, but his principal activity was in Egypt, a country which had always excited his interest and was to prove the place of his death. He became, in the 1820s, the Liverpool agent to the Pasha, Mahomet Ali; a lucrative if anxious connection as it was forbidden for strict Muhammadans to insure their goods or to allow anyone else to do so. He was also commissioned to furnish a palace for the Pasha ‘in the English style’, a task he knew better than to interpret literally. His choice of ottomans with gold fringes, huge mirrors and extravagant chandeliers was well received.

The Diabolical Miss Hyde by Viola Carr
The Night Before by Lisa Jackson
Girls' Guide to Flirting with Danger by Kimberly Lang
Pieces of Why by K. L. Going
Reboot with Joe Recipe Book by Cross, Joe
Broken Justice (Justice Brothers) by Halliday, Suzanne
Seducing the Fireman (Risky Business) by Jennifer Bonds
Samphire Song by Jill Hucklesby
Just What She Wants by Barbara Elsborg
Feile Fever by Joe O'Brien
Our partner