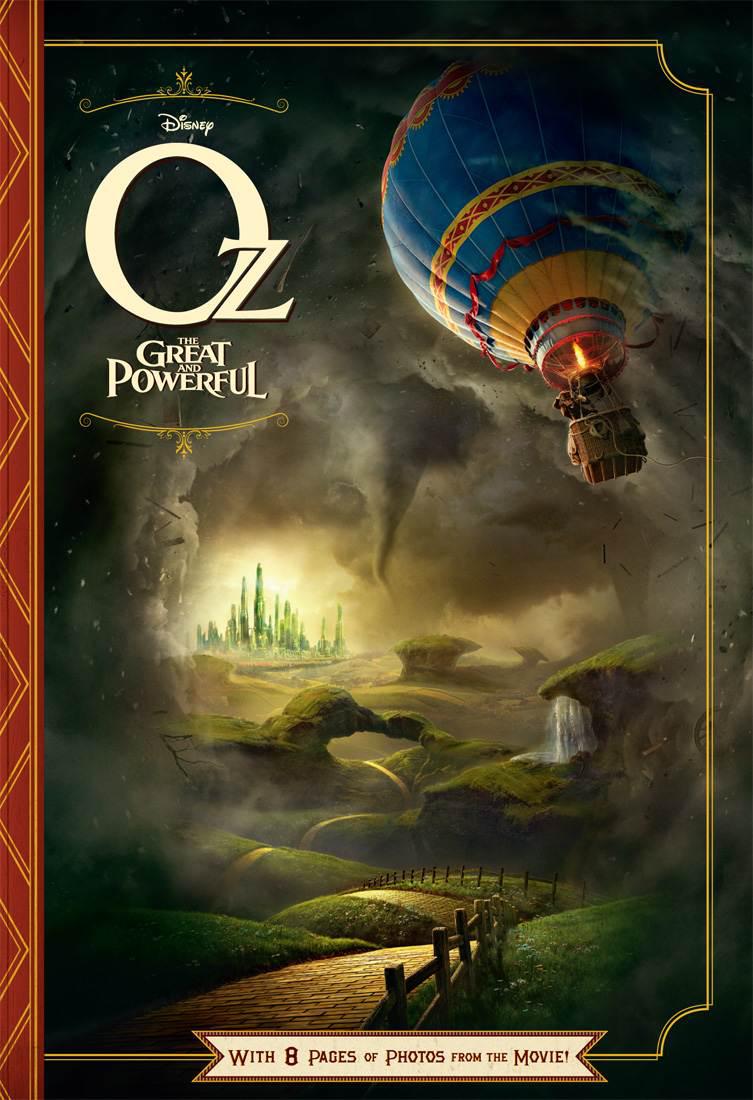 All rights reserved. Published by Disney Press, an imprint of Disney Book Group. No part of this book may be reproduced or transmitted in any form or by any means, electronic or mechanical, including photocopying, recording, or by any information storage and retrieval system, without written permission from the publisher. For information, address Disney Press, 114 Fifth Avenue, New York, New York 10011-5690.

HE CIRCUS HAD ARRIVED IN TOWN.
While it was a rather small and somewhat run-down affair, the citizens of the rural Kansas town still made their way through the gate, eager to escape their dull and gray lives if just for a few minutes and enter a world of wonder.

Horse-drawn buggies were parked outside, while farmers and their wives strolled the midway taking in the sights. A strong man accepted an iron bar from his beautiful wife and, gritting his teeth, slowly bent it. Farther down, a carnival worker shouted to passersby, encouraging them to come and see the gunslinging sharpshooting honey pie of the Wild West, Miss Bettylou Gumption. Suddenly, one voice rose above the others. It was coming from in front of a medium-sized exhibition tent.

“Right this way, folks!” the man in front of the tent called out. “Come and meet a master of magic and prestidigitation! He has traveled the world and baffled the crown princes of Europe! He will amaze! He will astound! In five short minutes the Great Oz will awaken from his deep meditative trance and the show will begin!”

Intrigued, people made their way into the tent, paying the man as they went. He smiled. It was going to be a good show.

Behind the tent, inside a wooden trailer belonging to the Great Oz, a beautiful young woman was applying her lipstick. “I always knew I was destined for show-biz. Now look at me—a magician’s assistant. Just a few minutes ago I was selling oil cakes on the midway!”

“Opportunity comes when you least expect it, my dear May,” said a voice that seemed to float out from behind a dressing curtain. Suddenly, the curtain parted with a dramatic flare as the voice called out, “Zim Zallah Bim!”

May looked up to see a man dressed in a turban and a long magician’s coat standing in front of the curtain. This was Oscar Zoroaster Phadrig Isaac Norman Henkle Emmanuel Ambroise Diggs, otherwise known as the Great Oz.

“Wow, what a getup,” May said. Oz smiled at his beautiful young assistant. He loved the circus life. It fit his personality to a T. He was never in one place for long, so there was always a new woman to woo or a crowd to please—and more importantly, no ties to bind him.

At that moment, Oz was in the process of training May to be a part of the act. While she wasn’t the brightest star under the big top, she was infatuated with Oz and that was all that mattered—to him.

May giggled at his outfit. He cut quite the figure in his costume. His dark hair curled slightly under a tall black hat and his broad shoulders filled out the black jacket he wore. Looking over at May, his eyes twinkled mischievously, causing her to giggle even more.

Walking over, Oscar removed May’s hat. “You won’t need this,” the magician began. “You’ll be playing the ‘simple country girl.
’
”

Then, with a flourish, he pulled his hand from behind his back to reveal a small music box. “A gift for you,” he said. “In honor of your debut. It belonged to my grandmother—a tsarina from Irkutsk and a decorated war hero.”

May cocked her head. “War hero?” she repeated. “Your grand
mother
?”

“Which batt—?” Oz started. May was asking too many questions. This was just another trick on Oz’s part. His grandmother wasn’t a war hero. It just sounded good…and made the ladies fall in love with him that much faster. He quickly racked his brain for an answer. “Oh, there are so many!” he finally said. “You’ve heard of the Battle of, uh Kreplach?”

May shook her head.

Oz smiled. “Oh
good
! It was the Battle of Kreplach! A bloody skirmish. This box was the only thing to survive.” He opened the music box and it began to play a lovely tune. “I know Grammie would want you to have it.” May swooned as Oz leaned in for a kiss.…

“Professor!” a voice called, causing Oz to pull back and scowl. A moment later Frank, Oz’s beleaguered assistant, bounded into the trailer.

“How many times have I told you to KNOCK!” Oz shouted angrily.

Frank paused, noticing May for the first time. Turning, he walked out of the trailer, shutting the door behind him.

Oz sighed. Good help was so hard to find. “You know what he’s doing, don’t you?” he said to May with an exhausted sigh. A moment later, there was a knock on the door. “Come in!” Oz said, rolling his eyes.

Frank re-entered. “It’s showtime!” he said. “Only half a house. Here’s the take.” He dumped his bowler hat on a nearby table, and a few pennies, a couple of nickels, and a rabbit’s foot spilled out.

Looking at all the money, or more specifically, the lack thereof, Oz’s eyes flashed with annoyance. Was that all those simple farmers thought he was worth? Scooping up the meager take, he unequally divided the money, giving just a few coins to Frank and nothing to May, insisting that for her, the applause from the crowd would be payment enough. But Frank wasn’t having it and began to protest.

“Well, how do you think I feel?” Oz replied. “A man
of my talents! I should be playing the Orpheum circuit! Instead, I’m in some dusty Podunk wearing a second-hand jacket that’s falling apart at the seams!” Oz lifted his elbow to expose the tear in the material. “You need to patch this, by the way,” he said quietly to Frank
.

Oz made his way to his workbench and began the final preparations for the show. He put some flash-paper up his sleeve, a handkerchief in his pocket, and a few doves in his coat. While he was preparing for his stage act, Frank eyed May hopefully.

“So you’re the new girl, huh?” he said as she smiled at him. “Good, we needed a new one. The last one left us. Poor thing suffered from a broken heart.”

“Attack! Heart attack!” Oz quickly interrupted. “She’s resting in Abilene and is expected to make a full recovery.” The magician then glared at Frank. How dare he tell her why she really left!

“Perhaps
you’d
like to join her,” Oz said to Frank with a slight undertone of menace to his voice. It was all for show, but then again, Oz was a showman, and a very good one.

Satisfied that he had put Frank back in his place, Oz turned his attention back to May. They had gone over her role before, but he wanted to make sure she knew what to do.

“Now remember, when I ask for a volunteer—” he began.

“I raise my hand,” May finished proudly.

Oz gave her a smile. “You are overqualified, my dear.”

Turning, he walked out of the trailer, Frank and May close behind. It was time to make some magic.

The show was going smoothly. Oz stood in front of a curtain, crafting a story to go with his tricks. Torches were set up, their flames flickering in the dim light of the tent.

“Journey with me,” he began, “across the desert to the mysterious lands of the Arabian Peninsula.” In their seats, the audience leaned forward, eager to hear what was to come. Waving his hand, the curtains parted behind him, revealing an Arabian backdrop. People oohed and ahhed. Oz smiled and went on.

Oz motioned with his hands and suddenly, the flames on the torches dimmed. The audience gasped. “For five thousand years,” Oz continued, “Fernanda’s lonely spirit has been trapped. But tonight, we will attempt to free her.” Looking out over the audience, Oz suppressed a grin. He had them just where he wanted them. “I will require a volunteer from the audience.”

No one raised a hand. Not even May, who sat in the third row looking blankly around.

Oz stifled a groan. “How about
you
, madam?” he finally asked, glaring straight at May.

A look of confusion crossed May’s face and then she seemed to remember her job. “Oh! Yes!” she cried. “I’d like to volunteer!”

“How kind of you,” Oz said insincerely. He gestured for her to join him on the stage. Turning back to the audience, he began the next part of his act. “A simple country girl, ladies and gentleman!” He looked down at May, who was now standing next to him, her eyes wide. “You have nothing to fear! So long as you
believe
! For when you do believe,
anything
is possible!”

As the audience watched, Oz raised his hand and waved it in front of May, as though controlling an energy that the audience could not see. “Your eyelids grow weary,” he intoned. “Grow heavy,” he said.

On cue, May’s eyelids fluttered and then closed.

The tent filled with an eerie sound and the crowd let out a collective
ooh
, clearly spooked. Oz let the sound reverberate through the tent before he went on. He placed his hand on May’s forehead; her body tilted backward, and he said, “Then rise, Fernanda, rise! I
command
you to rise!”

As Oz spoke, May’s legs began to come out from under her. And then, she began to float! Noticing that his audience was now well and truly hooked, Oz turned toward a table set up nearby. Sitting on top of the tablecloth was an Arabian urn. In one swift move, Oz pulled the cloth out from under the urn, leaving it undisturbed. Then he gently placed the cloth over May’s floating body and lifted his hands in the air. May’s body began to rise slowly as sand poured down from the sheet.