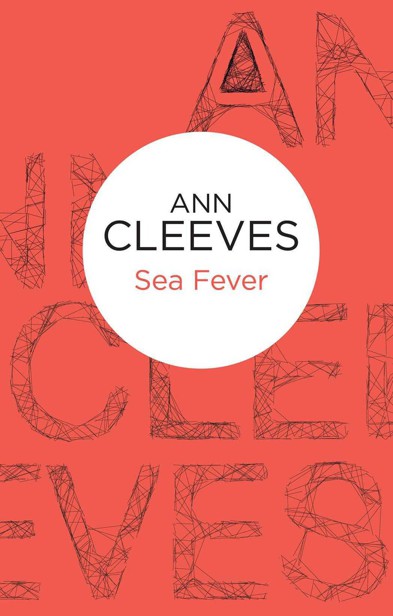 Ann Cleeves is the author behind ITV’s VERA and BBC One’s SHETLAND. She has written over twenty-five novels, and is the creator of detectives Vera Stanhope and Jimmy Perez – characters loved both on screen and in print. Her books have now sold over one million copies worldwide.

Ann worked as a probation officer, bird observatory cook and auxiliary coastguard before she started writing. She is a member of ‘Murder Squad’, working with other British northern writers to promote crime fiction. In 2006 Ann was awarded the Duncan Lawrie Dagger (CWA Gold Dagger) for Best Crime Novel, for
Raven Black
, the first book in her Shetland series. In 2012 she was inducted into the CWA Crime Thriller Awards Hall of Fame. Ann lives in North Tyneside.

Even if there had been no murder, the last trip of the season of the
Jessie Ellen
would have been news. A new bird for the world, after all, is rather special. There would undoubtedly have been interviews with specialist reporters, speculation about where the bird could possibly breed, sponsorship, perhaps, for an expedition to track it down to a cliff in some lonely and uninhabited island. There was, George felt all along, a relationship between the murder of the boy and the sighting of a storm petrel never before recorded. He was not so superstitious that he considered the death as a cause of the appearance of the bird. It was no sacrifice to the forces of nature. Neither did he see the petrel as an albatross bringing misfortune and disaster with its astounding beauty. Yet he thought that if the bird had never appeared, flying so close to the boat that they could make a plan of its wing formula and see the colour of the webs of its feet, Greg Franks would still be alive. Certainly the boy’s death spoiled the bird for them. They hated him, as if it were his fault, because the elation and joy which should have lasted for weeks was cut short, and the fame they deserved was denied to them.

George Palmer-Jones met Greg Franks first at Holywell Pond, a Northumberland Wildlife Trust Reserve. The memory of the meeting was strangely vivid, though there had been many such incidents in his birdwatching career. Afterwards, when other rare birds turned up, he looked out for Greg and noticed him. Despite that, when Mr. and Mrs. Franks hired him to trace their missing son, he did not at first connect them with the boy who had disturbed the Baillon’s crake at Holywell. When he did, the memory of the day returned to him sharp and complete, as if it had happened only minutes before.

It had been early June, a hot and sticky day with the threat of thunder and swallows flying low over yellow rape fields. The field by the pond was waist-high with buttercups, clover, and cow parsley. George arrived at the hide overlooking the pond at lunchtime, to discover that the bird had not been seen that day. It was probably skulking in the reed bed, said the exultant locals who had found the bird. It often did that.

The hide was full of people crammed together along the bench seat, waiting. There was the smell of hot creosote and damp vegetation. They talked occasionally, but their attention was on the still water. They were prepared to wait until evening. “Just be patient,” said the locals. “ It came out at dusk yesterday. It won’t have gone anywhere.”

Then Greg Franks burst into the hide. He seemed physically incapable of patience. He paced across the wooden floor smoking one cigarette after another, and his restlessness was so obvious, so flamboyant, that he unsettled all the others there.

“Don’t be a fool, man,” said one of the locals, a big square man with hands like spades. “You’ll scare it off; then no one will see it. This is a nature reserve. Do you think the trust will put out news of other rarities if you go tramping all over it?”

He stood up to confront Greg, blocking his way, and George thought there might be a fight. But Greg was too quick for them. He slipped out of the hide and into the reserve. They saw his sleek black head moving like a stoat’s through the reed bed. A moorhen gave an alarm call and splashed into view. In the hide there was silence.

Suddenly the crake was in the open, flying. It was so close to the hide that they could not focus their binoculars onto it. The bird flew around the pond once more, and they thought it would settle again at the edge of the water to give more prolonged views, but it changed direction and disappeared very quickly in the heat haze. Greg Franks must have tripped in the reed bed, because when he stood up to wave his arms triumphantly at them, he was dripping wet, and his hair straggled like seaweed across his face.

When he returned to the hide, George was surprised by the reception the boy received. The bird had been frightened off by an act of stupid exhibitionism, yet the watchers were indulgent, as if George were a spoilt but gifted child who should be allowed his own way. They had, of course, obtained brilliant if fleeting views of the bird. The birdwatchers who arrived later in the afternoon were less understanding and threatened unimaginable tortures to Franks if they should catch him.

In the following year George Palmer-Jones saw Greg Franks several times. He was on Scilly for most of October and seemed suddenly to be at every new bird. Recently, George saw, he had taken to driving a maroon Mercedes with American numberplates.

He usually had a group of friends with him—wild young men like himself and pretty girls. There were rumours that he made his money through drug dealing or theft or some vaguely illegal deals with friends in the city. He always seemed to have money, and he was always one of the first to arrive at a rarity, but no one seemed too concerned about what lay behind his apparent affluence. Birdwatching is full of eccentrics. They were more interested in his list.

The subject of Greg Franks’ list was brought up wherever the more avid twitchers gathered together. It must be immense, they said. Now he went for everything. Surely it must rival the older twitchers who had those blockers from the sixties. Surely by now it must be as big as Roger Pym’s.

George was not one of those for whom the speculation about lists is as important as seeing the birds themselves, and when he and his wife were hired by Mr. and Mrs. Franks to trace their missing son, he made no connection with Greg. It was more than a year after the visit to Holywell Pond. The first contact was by phone, and George took the call.

The woman on the other end of the phone had a Bristol accent, and her voice was breathless and shaking with nerves.

“That is Mr. Palmer-Jones, the private detective?” she insisted.

He hated the term, but she was so anxious already that he only said, “How can I help you?”

Then, in an incoherent stream of words, she pleaded with him to visit her and Mr. Franks at home. They were desperate, and the problem was too difficult, she said, too personal, to discuss on the telephone. It was midsummer, a quiet time for work and for birding, and George agreed to go to see them.

They found the house on a long and busy road in a soulless Bristol suburb close to the Rolls-Royce factory. George’s wife, Molly, was driving. It was a dual carriageway, with a motorway roundabout at one end and a bus station at the other. The house was mock Tudor, semidetached, with leaded windows and black beams on the gables. In a quiet cul-de-sac it might have been considered a desirable place to live, but with the lorries thundering past the wrought iron gates, it seemed desolate, stranded in a treeless no-man’s land.

The Franks must have been waiting for them, because the door opened immediately. Molly reached the house first because the driver’s seat was next to the pavement, and George had to wait for a break in the traffic before he dared leave the car; yet the man inside looked past her, as if she were invisible or not worth speaking to.

“Mr. Palmer-Jones,” he said. The Bristol accent was unusually hard and rather high-pitched. “ It was good of you to come.”

He had to shout against the traffic noise. He gestured for them to enter the house, then shut the door firmly behind them. They stood uncertainly in a dark hall. He was a small, solid, vigourous man. Despite the heat he wore a long cardigan over a sticky nylon shirt. In the background Mrs. Franks hovered fussily. Dennis Franks did not introduce her.

“Come into the lounge,” he said, still directing his words to George. “I expect you’d like some tea.” He turned to his wife. “Tea!” he said, and she disappeared through the kitchen door.

The living room was square, with a bay window which looked out over the main road. As they talked, the roar of the traffic outside filled the silences in their conversation. It was late August and hot, but none of the windows were open. The bright sunshine was filtered through net curtains, so everything seemed rather overcast and dusty. Every available surface was covered with china and glass ornaments, vases of silk flowers, framed photographs, so it seemed to George that there was hardly room to move.

“It was good of you to come,” Dennis Franks repeated. “My wife thought you might not understand over the telephone. I decided it would be better to ask you to come here.”

George felt stifled and trapped. There were better places to be in the last week of August. In the valleys of south-west Cornwall the first autumn migrants would be arriving. He should be planning his usual bank holiday birding weekend in Norfolk.

“What is the problem, precisely?” he asked, facing his attention back to the room. “You’d like us to trace your son?”

“That’s right!” The man’s voice was sharp and irritable. “He’s been missing for months. We hear about him occasionally, and sometimes he phones up to tell his mother he’s all right, but he moves around a lot, and we never know where he is.”

“Is there any special reason for wanting to trace him now?” George asked.

“It was Muriel’s idea,” Franks said angrily. “She thought it was the right thing to do. I want to sell the business, and she thinks the lad should be consulted before I go ahead. I told her there’s no chance that he’d want to come back here and work for the family. He made that quite clear when he left home. I’m not sure what she’s doing. I think it’s only an excuse to get him home. She misses him.”

Passion's Promise by Danielle Steel
Raising Hope by Katie Willard
Demon's Delight by MaryJanice Davidson
The Neighbors Are Watching by Debra Ginsberg
B007Q4JDEM EBOK by Poe, K.A.
Heartbeat Away by Laura Summers
Northern Spirit by Lindsey J Carden
The Downfall of Money: Germanys Hyperinflation and the Destruction of the Middle Class by Frederick Taylor
Blood, Body and Mind by Barton, Kathi S.
A Personal Matter by Kenzaburo Oe
Our partner