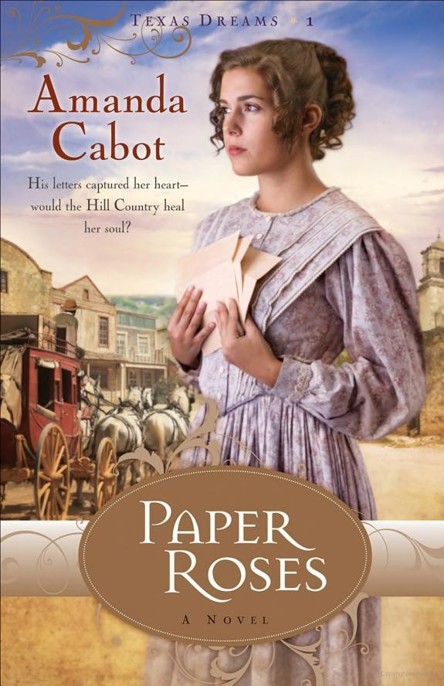 “With its unique setting and heartwarming characters,
Paper
Roses
celebrates the redeeming power of forgiveness, the enduring power of faith, and the healing power of our Creator’s everlasting love. Readers will long cherish this precious, precious book, the first in Cabot’s Texas Dreams trilogy.”

“
Paper Roses
, by Amanda Cabot, is a delightful, engaging, and very well-written story about loss, pain, and the healing power of forgiveness and surrender to God’s will. Mail order bride Sarah Dobbs is a strong yet vulnerable heroine, and a perfect match for the tormented but honorable rancher, Clay Canfield. The setting of Texas in 1856 rings true, as do the secondary characters who come to life as vibrant, well-developed people in their own right. I look forward, with great expectation, to future books in Ms. Cabot’s Texas Dreams series. This is a book you won’t be able to put down.”

Kathleen Morgan, author,
As High as the Heavens
and
One Perfect Gift

“Amanda Cabot’s novel is a tender, gentle story of releasing past hurts and moving confidently into a God-designed future. I was enchanted and look forward to future releases in this series.”

“A unique setting and characters who face issues at the heart of faith combine to provide a satisfying read.”

“I found it to be a heartfelt and engaging book. The main character bravely takes on new challenges while dealing with a complex mix of emotions regarding her disability, her sister’s well-being, and a difficult secret from her past. An unexpected twist brings a satisfying resolution to the central mystery of the story: who killed Austin? But by then, the characters are like family. I wasn’t ready for it end.”

“This is the kind of book I like to read. Strong characters, even secondary characters, who still have room to grow. Deep emotions—love and hate, bitterness and unforgiveness, loss and pain, forgiveness and redemption. I also loved the mystery with the unexpected twist at the end.”

“Amanda Cabot’s
Paper Roses
opens a window to the past replete with twists and turns that keep you wondering what’s going to happen!”

In memory of Jean Ellen Mayer,
whose journey to the Light
changed the direction of my writing.
Adieu, mon amie.

“It’ll be all right.” Sarah Dobbs wrapped her arms around the child, wishing with all her heart that she could believe the words she’d uttered so often. The truth was, it didn’t matter what she believed. All that mattered was keeping Thea safe. And so Sarah knelt on the hard-packed dirt of San Antonio’s main street to wipe the tears from her sister’s cheeks. The child was hot, tired, and excited by the unusual sights, a combination that turned normally sweet-tempered Thea querulous.

“Let me see, sweetie.” Sarah reached for her sister’s hands, giving each of the tiny palms a kiss. Thank goodness, this time Thea had not hurt herself. When she’d run and tumbled, trying to chase a burro, all she’d done was torn her hem again. The dress could be repaired far more easily than the skinned hands and knees that had been almost daily occurrences since they’d left the train.

“It’ll be all right,” Sarah repeated, rising as gracefully as she could.
It
will
be all right
, she told herself,
when Austin
arrives
. The journey that had been more difficult than she had dreamt possible was almost over. Once she and Thea reached Ladreville and the Bar C, the past would truly end. The old Sarah Dobbs would be gone forever.

“Walk?” Thea gave Sarah a look only a curmudgeon could refuse. Sarah was not a curmudgeon. She was a woman whose right leg was protesting the exercise and whose common sense was shouting that she and Thea should not remain in the hot Texas sun. She was also a woman who knew how desperately Thea needed to expend some of her seemingly endless supply of energy.

“A short walk.” Sarah smiled as a grin crossed the child’s face. It took so little to please Thea.
How could anyone
have . . . ?
Deliberately, Sarah bit the inside of her cheek.
That’s all past
, she reminded herself. She wouldn’t think about the past. Instead, she walked slowly and deliberately, trying to minimize her limp as she looked for the man who held the key to her future.

Where was he? Where was Austin Canfield? Sarah kept a tight grip on Thea’s hand as they made their way down the street. Her tumble forgotten, Thea giggled at the sight of oxen with almost unbelievably long horns pulling two-wheeled carts.

There was no denying the differences between this city and Philadelphia. They were as real as the warmth that felt more like midsummer than the last days of winter, as real as the smells of dust and dung and dried leaves. But the greatest difference was sensed rather than seen or heard. There was a contagious vitality about this frontier town. Sarah saw it in the way men swaggered rather than strolled; she heard it in the shouted greetings. Whether they spoke Spanish or English, enthusiasm was evident in every word. Texas was young and brash and exciting. It was everything she sought, or it would be if Austin were here.

But he wasn’t. There was no doubt about that, just as there had been no doubt the previous dozen times she had looked for him. Though the center of San Antonio bustled with life, there was no one who fit his description.
I’m four
inches over six feet
, he had written,
with sandy hair and
blue eyes, and when I see you, I’ll be wearing a grin as big as
the state of Texas.
Sarah had smiled when she had read his words. Texans, she had heard, were prone to exaggeration. She wasn’t smiling now. The last of their traveling companions had departed half an hour ago, leaving Sarah and Thea alone, more than a thousand miles and a lifetime away from home. She shook her head slowly, negating her last thought. Philadelphia wasn’t home. Not anymore.

“Papa!” Thea tugged Sarah’s hand and started to run across the road. Though they hadn’t been there a moment ago, two cowboys had emerged from the saloon on the opposite side of the street and were lounging in the doorway.

“No, sweetie.” Sarah wrapped her arms around her sister, restraining her. Neither of those men was the new father who had promised to meet them, the man who was now an hour late.

As if they had heard Thea’s cry, the cowboys approached Sarah. “Might we be of assistance, ma’am?”

Sarah shook her head. When it had been apparent that Austin Canfield wasn’t waiting for the stagecoach, the other woman who had traveled with them had advised waiting inside the town hall, which Texans referred to by its Spanish name,
cabildo
, but Sarah, knowing that Thea would hate being cooped up in yet another small space, had remained outside. She had believed her mourning garb and the presence of a small child at her side would discourage unwanted attention. That had been the case on the train and the stagecoaches. But San Antonio was different. Texans were as friendly as Philadelphians were reserved.

“No, thank you, gentlemen. My fiancé will be here momentarily.” She hoped it wasn’t a lie.

Though the men exchanged amused glances, they retreated. With a sigh of relief, Sarah looked at the clock tower. She would wait for five minutes longer. If Austin hadn’t arrived by then, she and Thea would go inside.

Where was he? Sarah looked around for what seemed like the hundredth time, hoping that a tall, sandy-haired rancher would appear. He didn’t. She took another deep breath as she considered the reasons he might not have come. Perhaps his horse had gone lame. Perhaps a wheel had fallen off the wagon. Those were possibilities, and they were far more palatable than the alternative. Surely Austin hadn’t changed his mind. Surely he hadn’t been lying when he’d written those wonderful letters. Surely he wasn’t going to abandon her and Thea the way everyone in Philadelphia had. Or was he?

“No, sweetie. No skipping.” Though Thea wanted to run, running was one of the things Sarah could not do. Was that the reason Austin was not here? She paused as doubts assailed her. Had Austin reconsidered and realized he had no desire to wed a woman whose right leg was twisted and scarred and an inch shorter than her left?

Sarah reached into her reticule and touched the packet of letters, trying to reassure herself.
“You speak of your
imperfections as though the rest of us bore no blemishes
.
”
There was no need to open the envelopes and withdraw the pages, for she had memorized the words Austin had written, just as she had engraved upon her mind the appearance of the brash handwriting that was somehow at odds with the eloquent phrases.
“My dearest Sarah, if there is one thing I
have learned, it is that no one is perfect. But you, my sweet
wife-to-be, are closer to perfection than you know.”

She wasn’t perfect. Far from it. Still, her heart had soared with happiness when she’d read that sentence. It was Austin who was perfect, for he had somehow known exactly the right words to woo her. Sarah hadn’t expected to be courted. This was, after all, a business arrangement. But there was no denying the fact that she had reveled in Austin Canfield’s letters. They had been the one ray of light in those horrible months after Mama and Papa’s deaths.

Reverend Lang claimed they were proof that God loved her and was watching over her. Sarah knew otherwise. God had deserted her and so, it appeared, had her bridegroom.

Home by Nightfall by Charles Finch
The Dark Descends by Diana Ramsay
The Chardon Chronicles: Season One -- The Harvest Festival by Kevin Kimmich
Acting Brave (Fenbrook Academy #3) by Helena Newbury
Semper Human by Ian Douglas
The Wandering Fire by Guy Gavriel Kay
Hide Her Name by Nadine Dorries
Life After Death by Cliff White III
Savage Continent: Europe in the Aftermath of World War II by Keith Lowe
Cause of Death by Jane A. Adams
Our partner