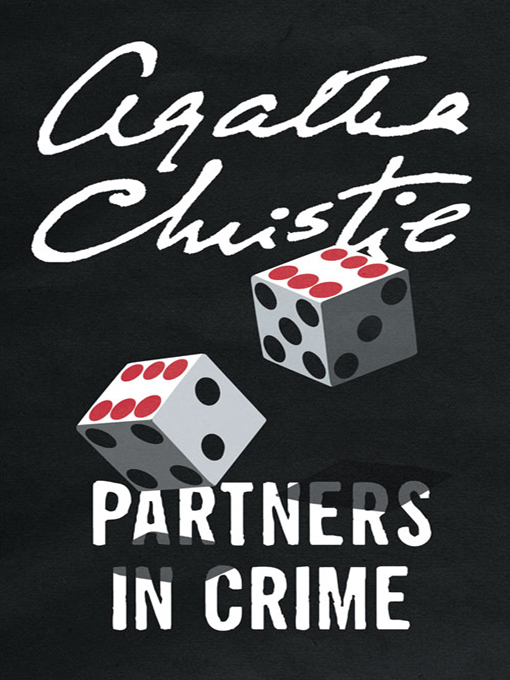 1 A Fairy in the Flat

3 The Affair of the Pink Pearl

4 The Adventure of the Sinister Stranger

6 The Gentleman Dressed in Newspaper

7 The Case of the Missing Lady

9 The Man in the Mist

12 The House of Lurking Death

Chapter 1
A Fairy in the Flat

Mrs Thomas Beresford shifted her position on the divan and looked gloomily out of the window of the flat. The prospect was not an extended one, consisting solely of a small block of flats on the other side of the road. Mrs Beresford sighed and then yawned.

‘I wish,’ she said, ‘something would happen.’

Her husband looked up reprovingly.

‘Be careful, Tuppence, this craving for vulgar sensation alarms me.’

‘A very profound statement, Tuppence. But not original. Eminent poets and still more eminent divines have said it before–and if you will excuse me saying so, have said it better.’

‘Six years ago,’ continued Tuppence, ‘I would have sworn that with sufficient money to buy things with, and with you for a husband, all life would have been one grand sweet song, as one of the poets you seem to know so much about puts it.’

‘Is it me or the money that palls upon you?’ inquired Tommy coldly.

‘Palls isn’t exactly the word,’ said Tuppence kindly. ‘I’m used to my blessings, that’s all. Just as one never thinks what a boon it is to be able to breathe through one’s nose until one has a cold in the head.’

‘Shall I neglect you a little?’ suggested Tommy. ‘Take other women about to night clubs. That sort of thing.’

‘It’s only in modesty that men score top marks,’ murmured her husband. ‘But what is the matter with you, Tuppence? Why this yearning discontent?’

‘I don’t know. I want things to happen. Exciting things. Wouldn’t you like to go chasing German spies again, Tommy? Think of the wild days of peril we went through once. Of course I know you’re more or less in the Secret Service now, but it’s pure office work.’

‘You mean you’d like them to send me into darkest Russia disguised as a Bolshevik bootlegger, or something of that sort?’

‘That wouldn’t be any good,’ said Tuppence. ‘They wouldn’t let me go with you and I’m the person who wants something to do so badly. Something to do. That is what I keep saying all day long.’

‘Twenty minutes’ work after breakfast every morning keeps the flag going to perfection. You have nothing to complain of, have you?’

‘Your housekeeping is so perfect, Tuppence, as to be almost monotonous.’

‘You, of course, have got your work,’ she continued, ‘but tell me, Tommy, don’t you ever have a secret yearning for excitement, for things to
happen
?’

‘No,’ said Tommy, ‘at least I don’t think so. It is all very well to want things to happen–they might not be pleasant things.’

‘How prudent men are,’ sighed Tuppence. ‘Don’t you ever have a wild secret yearning for romance–adventure–life?’

‘What
have
you been reading, Tuppence?’ asked Tommy.

‘Think how exciting it would be,’ went on Tuppence, ‘if we heard a wild rapping at the door and went to open it and in staggered a dead man.’

‘If he was dead he couldn’t stagger,’ said Tommy critically.

‘You know what I mean,’ said Tuppence. ‘They always stagger in just before they die and fall at your feet, just gasping out a few enigmatic words. “The Spotted Leopard”, or something like that.’

‘I advise a course of Schopenhauer or Emmanuel Kant,’ said Tommy.

‘That sort of thing would be good for you,’ said Tuppence. ‘You are getting fat and comfortable.’

‘I am not,’ said Tommy indignantly. ‘Anyway you do slimming exercises yourself.’

‘Everybody does,’ said Tuppence. ‘When I said you were getting fat I was really speaking metaphorically, you are getting prosperous and sleek and comfortable.’

‘I don’t know what has come over you,’ said her husband.

‘The spirit of adventure,’ murmured Tuppence. ‘It is better than a longing for romance anyway. I have that sometimes too. I think of meeting a man, a really handsome man –’

‘A brown, lean man, terrifically strong, the kind of man who can ride anything and lassoes wild horses –’

‘– and has lived in the Wilds,’ continued Tuppence. ‘I should like him to fall simply madly in love with me. I should, of course, rebuff him virtuously and be true to my marriage vows, but my heart would secretly go out to him.’

‘Well,’ said Tommy, ‘I often wish that I may meet a really beautiful girl. A girl with corn coloured hair who will fall desperately in love with me. Only I don’t think I rebuff her–in fact I am quite sure I don’t.’

‘That,’ said Tuppence, ‘is naughty temper.’

‘What,’ said Tommy, ‘is really the matter with you, Tuppence? You have never talked like this before.’

‘No, but I have been boiling up inside for a long time,’ said Tuppence. ‘You see it is very dangerous to have everything you want–including enough money to buy things. Of course there are always hats.’

‘You have got about forty hats already,’ said Tommy, ‘and they all look alike.’

‘Hats are like that,’ said Tuppence. ‘They are not really alike. There are
nuances
in them. I saw rather a nice one in Violette’s this morning.’

‘That’s it,’ said Tuppence, ‘that’s exactly it. If I had something better to do. I suppose I ought to take up good works. Oh, Tommy, I do wish something exciting would happen. I feel–I really do feel it would be good for us. If we could find a fairy –’

‘Ah!’ said Tommy. ‘It is curious your saying that.’

He got up and crossed the room. Opening a drawer of the writing table he took out a small snapshot print and brought it to Tuppence.

‘Oh!’ said Tuppence, ‘so you have got them developed. Which is this, the one you took of this room or the one I took?’

‘The one I took. Yours didn’t come out. You under exposed it. You always do.’

‘It is nice for you,’ said Tuppence, ‘to think that there is one thing you can do better than me.’

‘A foolish remark,’ said Tommy, ‘but I will let it pass for the moment. What I wanted to show you was this.’

He pointed to a small white speck on the photograph.

‘That is a scratch on the film,’ said Tuppence.

He handed her a magnifying glass. Tuppence studied the print attentively through it. Seen thus by a slight stretch of fancy the scratch on the film could be imagined to represent a small winged creature on the fender.

‘It has got wings,’ cried Tuppence. ‘What fun, a real live fairy in our flat. Shall we write to Conan Doyle about it? Oh, Tommy. Do you think she’ll give us wishes?’

‘You will soon know,’ said Tommy. ‘You have been wishing hard enough for something to happen all the afternoon.’

At that minute the door opened, and a tall lad of fifteen who seemed undecided as to whether he was a butler or a page boy inquired in a truly magnificent manner.

‘Are you at home, madam? The front-door bell has just rung.’

‘I wish Albert wouldn’t go to the Pictures,’ sighed Tuppence, after she had signified her assent, and Albert had withdrawn. ‘He’s copying a Long Island butler now. Thank goodness I’ve cured him of asking for people’s cards and bringing them to me on a salver.’

The door opened again, and Albert announced: ‘Mr Carter,’ much as though it were a Royal title.

Tuppence jumped up with a glad exclamation, and greeted a tall grey-haired man with piercing eyes and a tired smile.

‘Satisfactory, but dull,’ replied Tuppence with a twinkle.

‘Better and better,’ said Mr Carter. ‘I’m evidently going to find you in the right mood.’

Albert, still copying the Long Island butler, brought in tea. When this operation was completed without mishap and the door had closed behind him Tuppence burst out once more.

‘You did mean something, didn’t you, Mr Carter? Are you going to send us on a mission into darkest Russia?’

‘Not exactly that,’ said Mr Carter.

‘But there is something.’

‘Yes–there is something. I don’t think you are the kind who shrinks from risks, are you, Mrs Tommy?’

‘There is certain work to be done for the Department–and I fancied–I just fancied–that it might suit you two.’

‘I see that you take the
Daily Leader
,’ continued Mr Carter, picking up that journal from the table.

He looked inquiringly at Mr Carter. The latter nodded. ‘That detective agency has been on its last legs for some time,’ he murmured. ‘Friend of mine acquired it for a mere song. We’re thinking of setting it going again–say, for a six months’ trial. And during that time, of course, it will have to have a manager.’

‘Mr Blunt has been rather indiscreet, I’m afraid. In fact, Scotland Yard have had to interfere. Mr Blunt is being detained at Her Majesty’s expense, and he won’t tell us half of what we’d like to know.’

‘I suggest that you have six months leave from the office. Ill health. And, of course, if you like to run a Detective Agency under the name of Theodore Blunt, it’s nothing to do with me.’

‘Mr Blunt did some foreign business, I believe. Look out for blue letters with a Russian stamp on them. From a ham merchant anxious to find his wife who came as a refugee to this country some years ago. Moisten the stamp and you’ll find the number 16 written underneath. Make a copy of these letters and send the originals on to me. Also if any one comes to the office and makes a reference to the number 16, inform me immediately.’

‘I understand, sir,’ said Tommy. ‘And apart from these instructions?’

Mr Carter picked up his gloves from the table and prepared to depart.

‘You can run the Agency as you please. I fancied’–his eyes twinkled a little–‘that it might amuse Mrs Tommy to try her hand at a little detective work.’