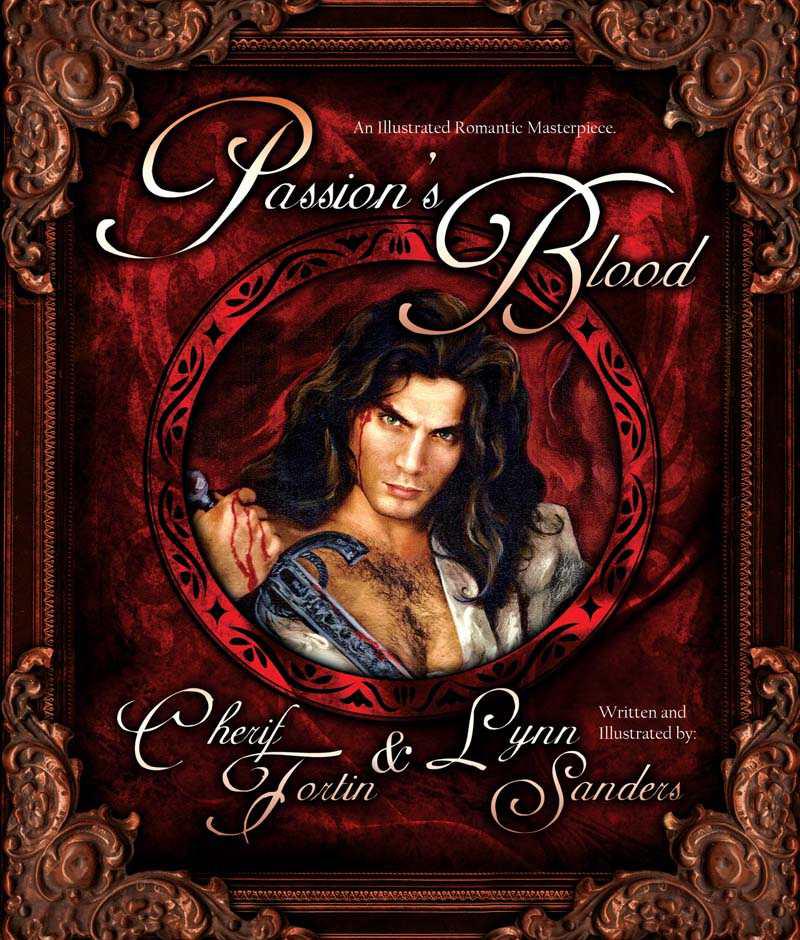 Lady Leanna is a flame-haired beauty, loved by her betrothed Prince Emric and desired by his loathsome brother, Prince Bran. Although in love with Emric, Leanna has still not made her peace with the knowledge that this arrangement was forced upon her. Prince Emric, noble and courageous, rides to war, ignorant of his brother's dark treachery. In a net of betrayal and violence, the young lovers must preserve their faith, and Leanna must keep Emric alive with her love and the magical powers she herself does not yet fully understand.

Cherif Fortin and Lynn Sanders are accomplished artists and co-owners of Fortin Sanders Illustrations. Their studio produces world-renowned book cover illustrations, portraiture, and fine art. They both live near Chicago.

Names, characters, places, and incidents are the products of the author’s imagination or are used fictionally. Any resemblance to actual events, locales, or persons, living or dead, is entirely coincidental.

I would like to thank models Pat Lambke, Beth Orbison, and Dave Spung for their great portrayals of the characters in
Passion’s Blood.
Their friendship and dedication to the project is sincerely appreciated.

A special ‘hats off’ to my artist/writer/actor/business partner Cherif Fortin for doing more than triple-duty. Cherif, my dear friend, you made the project great fun.

Thanks to my children Laurel, James and Jason who are always cheering me on and to my grand kids Amanda, Eli, Brianna and Mitchell who I love dearly.

And finally, thanks to our loyal fans without whose support and friendship
Passion’s Blood
would truly not exist.

Although only two names appear on this book’s cover, it takes a team of individuals to create a book like
Passion’s Blood.

I would like to thank my beautiful and devoted wife, Dawn, whose love, encouragement, and sense of humor keep me going when otherwise I would surely falter.

Thanks also to our wonderful children Kira, Kai, and Lara. Their cheerful and loving treatment of a sometimes grumpy, preoccupied Dad has earned my everlasting gratitude.

Thanks to Lynn Sanders, who entered my life as a business partner, but over the years has become best friend, confidant, mentor, and part of the family.

Lastly, many heartfelt thanks to Adam Mock, Helen Rosburg, and the professionals at Medallion Press. Your hard work and dedication have been a blessing.

L
ord Gareth brought his sword down in a mighty arc, cleaving his assailant’s upraised buckler in two and hurling him to his death from atop the palisade. He spat a bloody oath as another of the woad-painted savages, eyes as wild as a mad dog’s, clambered over the merlon.

“Fall back!” Gareth shouted, even as he parried a dagger thrust and brought his blade down. There was the snap of bone and Gareth shouldered the slumping figure back over the wall. “Fall back,” he roared again. “We’ll be hemmed in!”

As if in echo to his words, a thunderous crash shook the fortress and the main gates leading into the yard from the gatehouse cracked, then split from the hinges. The Heldann horde raised a soul-shattering howl of triumph. With a final groan, the gates collapsed and were heaved aside by the tide of Highland warriors. The courtyard flowed crimson as the defenders fell beneath the sheer savagery of the Heldanners, who slew those standing before them with steel, primitive stone, and naked hands and teeth.

Gareth tore his gaze away from the terrible spectacle and moved along with the few of his men who still lived. As they climbed up the north tower stairs, the enemy poured over the walls behind them.

At his side a youth, blood streaming from a gash on his forehead, closed and barred the door. Others piled wood and debris to form what they knew would be but
a short-term deterrent.

Gareth seized the coil of mail at the youth’s neck and led him down the stone-lined corridor until he and his remaining men burst into the great hall.

“We’ll make our stand here,” Gareth bellowed with grim determination. His grey beard was spotted with foam, his mail awash with crimson. He wiped a bloody hand across his brow and gestured toward a group of men near the wall.

“You there, barricade the door. The rest of you, clear the center of the hall.”

“This is unnatural, m’lord,” said a dark-haired woodsman who had taken refuge in the fortress and fought as well as any of Gareth’s own. He wiped gore from a long hunting knife. “The tribes this close to the Saber River do not fight in such numbers.”

“They do today, by the blood of the Father,” swore Gareth. Yesterday, men would have laughed at the suggestion of a united Highlands. Today, the disparate tribes were sundering the keep of Gallitain like kindling. “Let us pray our riders made Brimhall.”

He took a quick count of the remaining defenders. Barely a score. Not nearly enough to fight their way out.

A sudden crash resounded through the stone-lined chamber as the Heldanners brought their battering ram to bear against the doors of the hall. Men moved away from the ramshackle barricade of furnishings to the center of the room as the echo of the ram filled the air with a sound like the tolling of a funeral knell. Already the boards were splitting near the edges. With gritted teeth, they awaited the inevitable, none but Lord Gareth daring to speak.

“You’ve done the king proud this day, men,” he said, tightening the fastenings of his shield so it would not slip from his numbed arm. “Let us give these cursed Highlanders a reason to remember the name of Wareham.” He lifted his bloodstained sword to the ready.

When at last the doors shattered and the barricade was forced aside, it was
not to the roar of a slaughter-maddened mob, but to a silence infinitely more ominous. Dozens of clansmen, dripping with gore and panting with the exertion of their murderous fury, poured into the hall. Their faces bore wolfish grins and their steel glimmered like moonbeams as they surrounded the last defenders of Gallitain.

From their midst strode a tall and powerful figure, clad in furs and circular plates of steel sewn to a leather jerkin. His dark hair was braided around a face as wicked to behold as the sweep of the notched axe he held in his mighty grasp. His eyes sought and found Lord Gareth and he smiled, licking his lips in some private anticipation too loathsome to contemplate.

“Kill them all,” he said flatly in a voice like the grinding of heavy stones. “But leave their chieftain to me.”

The horde howled and rushed in.

L
et’s rest here a moment,” Leanna called, dropping gracefully to the ground and setting her grey mare free to graze in the sweet heather. “I tire of the ride.”

She laughed softly to herself for, in truth, she had another reason for stopping. Running to the edge of a glade that seemed to be fashioned of dark green velvet, she threw herself down in the billowing grass, which was woven with delicate yellow wildflowers and dancing with butterflies. The burble of a brook a short distance away fell like music onto her ears.