Read Path of the Horseman Online

Path of the Horseman 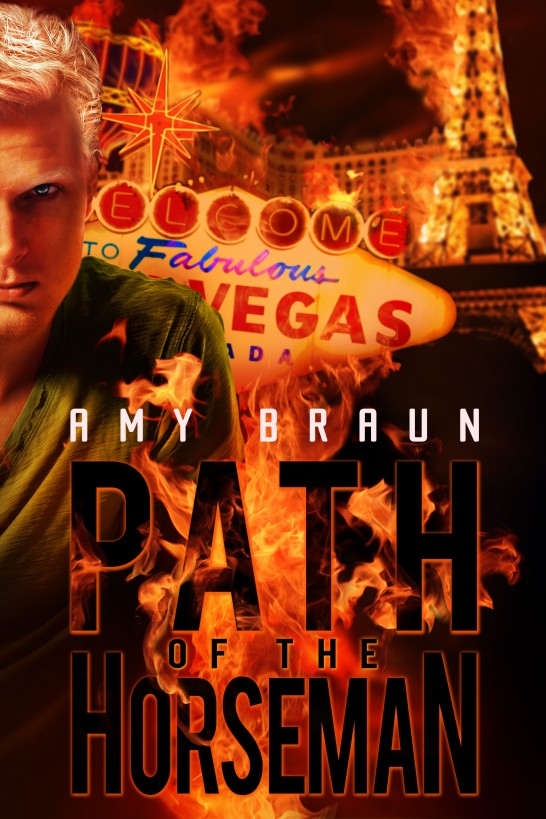 Path of the Horseman
by Amy Braun

This is a work of fiction. Any names,
characters, places, and incidents are the product of imagination.
Any resemblance to actual persons, living or dead, events, or
locations is entirely coincidental. No part of this book may be
reproduced in any written, electronic, recording, or photocopying
without written permission of the author.

PATH OF THE HORSEMAN

For my friends and family.

“
Each man is the architect of his own
fate.” – Appius Claudius

Of the Four Horsemen, Pestilence is the
ultimate catalyst.

Sure, it’s probably the others that will get
you. Famine starves you and War makes you insane before Death
finally tracks you down. But Pestilence is the reason things go
straight to Hell.

Don’t get me wrong– I was good at my job.
Damn good. Too damn good, actually. I worked hard on my
super-virus. The Big Boss Upstairs said wipe them out, so I did
just that.

I was the spark that burned down the
world.

Shame I didn’t read the fine print. Logan
said I was being over-enthusiastic, but who listens to their older
brother when they’re having the time of their life? Doing what I
was created to do?

Ending the world wasn’t a mistake. It was my
job. But watching it all unfold, all the pain and blood and the
endless screams, I hadn’t anticipated that.

Before the seal was opened and we were let
out, Heaven had been updating us on the world beyond our stone
prison. We knew all of Earth’s history. We didn’t know when we’d be
released, only that we would be some day. So our handlers saw fit
to feed us a never-ending documentary on Earth’s history. I watched
the first grunting humans shamble out of their caves and see light
for the first time. I watched the rise and fall of Rome. I saw the
radical slaughters of Genghis Khan then watched Vlad the Impaler
earn his reputation in Transylvania. I also saw artists change the
world only to fall into depression and suicide. I witnessed great
men climb up the ladder from nothing, only to be screwed over by
packs of backstabbing bullies. I even know the truths about Area 51
and the JFK assassination. Not that I’m about to share.

Amazing inventions, colossal failures, and
countless wars. We watched it behind the scenes. Watched the
monkeys from beyond the glass. We were intrigued, Hell was amused,
and Heaven was losing patience.

Finally, the monkeys threw too much shit on
the windows. They sparked a third World War, one that the Big Boss
Upstairs knew would obliterate the world.

But I never thought about what it would be
like to watch my disease spread like wildfire in a paper forest. I
hadn’t imagined seeing my closest brother parch the earth until it
was a husked shell of itself. I wasn’t prepared when my oldest
siblings tore through the world like a knife plunging into fresh
skin, the hot pain of War chased by the cool conviction of
Death.

Our handlers hadn’t prepared half as much as
they thought they did. We weren’t the only things let out that day.
Turned out demons were tricky sons of bitches with as much patience
as any angel.

Standing on the hilltop, watching my brothers
annihilate one half of the land while the demons picked up the
scraps made me sicker than the plague I let out. We were told we’d
be saving humanity. The Tribulation would lead to the Second
Coming. A clean slate to restart the world.

What a fucking lie.

I couldn’t believe how long it took for them
to see me. When they weren’t excited, they were the speed of a
rolling pencil and about as smart, but I was a walking buffet. I
had to shoulder into some of the idiots to get them to notice
me.

Though when they did, the plan started
getting dangerous. There wasn’t a lot a Plagued could do to me, but
I could still get hurt. Getting crushed by a bunch of decaying
corpses was not on my list of death wishes.

Their shambling picked up as I jogged through
the crowd of Plagued. Raspy moans and guttural growls followed my
back. Good to know I got their attention.

I needed them to surround me. Yeah, I could
have taken them out one at a time, but where’s the fun in that?
Besides, it had been so long since I used my powers that I was
beginning to feel
human
.

Definitely not as fun as being the Real
Me.

So I ran to the center of the town, making as
much noise as I could. Knocked over a garbage bin, threw a rock
into a window, shouted for help, the things only moronic people
did.

Not that there were any stupid people alive
anymore, thanks to my brothers and me. No Good Samaritans,
either.

I slowed down and stood at a four way stop,
looking at every intersection and counting all of the Plagued.
Five, ten, fifteen, twenty... Twenty-three? That’s it? Damn.
Last week’s haul was better.

But it wasn’t the Plagued I was really after.
Oh no. I’m a guy who tries for the bigger game. Yes, I turned
humans into flesh-eating zombies. There, I confess. But the real
monsters? The ones who were fast, strong, and literally
bloodthirsty? I didn’t make those.

I watched the Plagued shamble closer, keeping
my eyes on the windows of the busted shops and the alleys. They
could come out during the day, but they hated it.

Still, I was fresh meat. Something I knew
they wanted. As far as they knew, I was a nice juicy human. The
rarest of rare for their palates.

Come on out, you bastards. Take a bite of me,
and choke.

I swear the Soulless were less patient than
their brain-dead brethren. They eased out of the dark like pools of
oil dripping into shadows. Stealthy and languid, they were the
jaguars hiding in the jungle. There were four of them. Less than I
accounted for. I would have gone back to recheck my numbers, but
the converging circle of Plagued was tightening. The smell nearly
made
me
gag. Think sleeping next to a rotting corpse in a
dumpster is bad? Try standing in the middle of over twenty decaying
corpses whose body odor alone will have your stomach rethinking
your lunch.

The Soulless weaved faster through the crowd
of undead. I could see them being shoved aside. The Soulless wanted
first bites, the selfish jerks. There was enough of me to go
around.

I kept my hands loose at my sides, relaxing
my mind and pulling up the ancient power inside my body. It grew
like the maw of a yawning lion, wide, roaring, and showing all its
teeth.

I shouldn’t have been using it, but… it felt
fucking
good
.

The power shivered under my skin as the
Soulless gave up on subtlety. The Plagued were feet away, and they
wanted early dibs. The closest Plagued were just stretching out
their withering fingers when the Soulless burst through the lines.
They hissed like feral cats, bloodshot eyes narrowed in hunger,
black tipped claws pointing out like shards of glass from their
fingertips, dried blood caked around their crocodile toothed
mouths.

The Soulless thought they were the top dogs.
Highest on the food chain. Untouchable.

But they were nothing compared to me.

Their claws barely scratched my arm as I let
all that pent up power go. A living disease exploded out of my body
in a wave of black smoke and ash. I controlled the smoke, watching
its tendrils snake into the mouths of the Soulless. They skidded to
a stop and screeched as I turned the smoke into a corrosive
bacteria that devoured their insides. The hungry bacteria tainted
their pale blue veins, turning them into black cracks on their
dirty, alabaster skin. The four Soulless gave a collective scream
before collapsing onto the ground. Their pale complexions turned
grey, and I knew my job was done.

But did I stop there? Of course not. I was
surrounded by walking corpses and too lazy to fight my way out.

I pushed the hazy disease toward the Plagued.
I narrowed my smoke, condensing parts of the vapor to the size of
hornets. My locusts. It had been so long since I used them.

And they were hungry.

Holding onto my smoke, I let the locusts fly
at the Plagued. They latched onto the walking dead instantly,
through their already decaying flesh. Dead things don’t feel pain,
so they didn’t scream or howl. They just twitched and jerked, like
they were dancing in a possessed rave while the smoke machine
poisoned them.

Took another minute for the Plagued to
collapse onto the ground next to their freshly dead Soulless pals.
I pulled the locusts back, dissolving them into fumes that I pulled
into my skin. By the time the disease was back in my body, I was
light-headed and seeing stars. It had been a long time since I’d
used the locusts, and I’d forgotten how draining they could be. I
had a lot of power, but no idea how much longer it would last
me.

Playing human was a bitch. Stupid Bosses
should have told me that much.

I shook the dizziness off and breathed
steadily, then looked at my work.

Not a bad haul, actually.

After effectively vaporizing the overeager
vampires and their brain-dead cousins, there was nothing left for
me to do in Boulder City. This had been my sector since that little
apocalyptic party my brother and I hosted six months ago, and I
hadn’t been to one since. Not even a Sunday dinner. Not that there
was a lot to eat since Simon did his job.

Some days I wondered if the Bosses Upstairs
knew what would happen to us after we cleansed the earthly slate.
Actually, I’m pretty sure they did. We were just tools to them. The
ultimate stain remover, no money back guarantee required. Except
what do you with the bottle when those stains are gone? You toss
it. The stain remover did its job, and you don’t need it
anymore.

So we were stuck down here with the leftover
dead and might-as-well-be-dead, wandering back and forth because we
had no direction. When we finally picked our spots, we stayed in
them. It wasn’t like anything could really hurt us.

Too bad that like the stain remover, we had
an expiry date. Nobody was coming from on high to take us back to
the clouds and throw us a thank you party. They couldn’t even be
bothered to seal us back up again. I wouldn’t really want to be
locked in the pit with my sociopathic siblings again, but a change
of scenery would be nice. I was sick of the sandstorms, the
sunburns, and the smell of old death.

In the end, that was what made me leave my
little Boulder. I needed some kind of adventure. Anything to kill
the time while looking for something to actually kill.