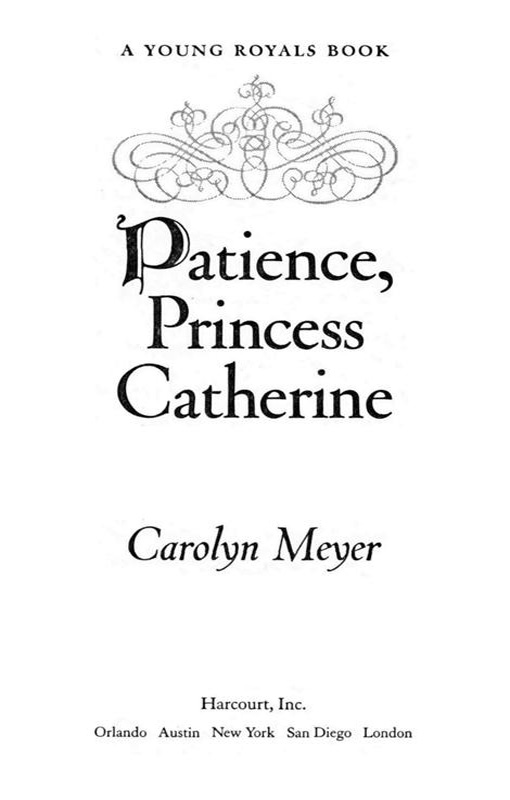 Patience, Princess Catherine
is a work of fiction based on historical figures and
events. Some details have been altered to enhance the story.

Requests for permission to make copies of any part of the
work should be submitted online at
www.harcourt.com/contact
or mailed to the following address: Permissions Department,
Houghton Mifflin Harcourt Publishing Company,
6277 Sea Harbor Drive, Orlando, Florida 32887-6777, 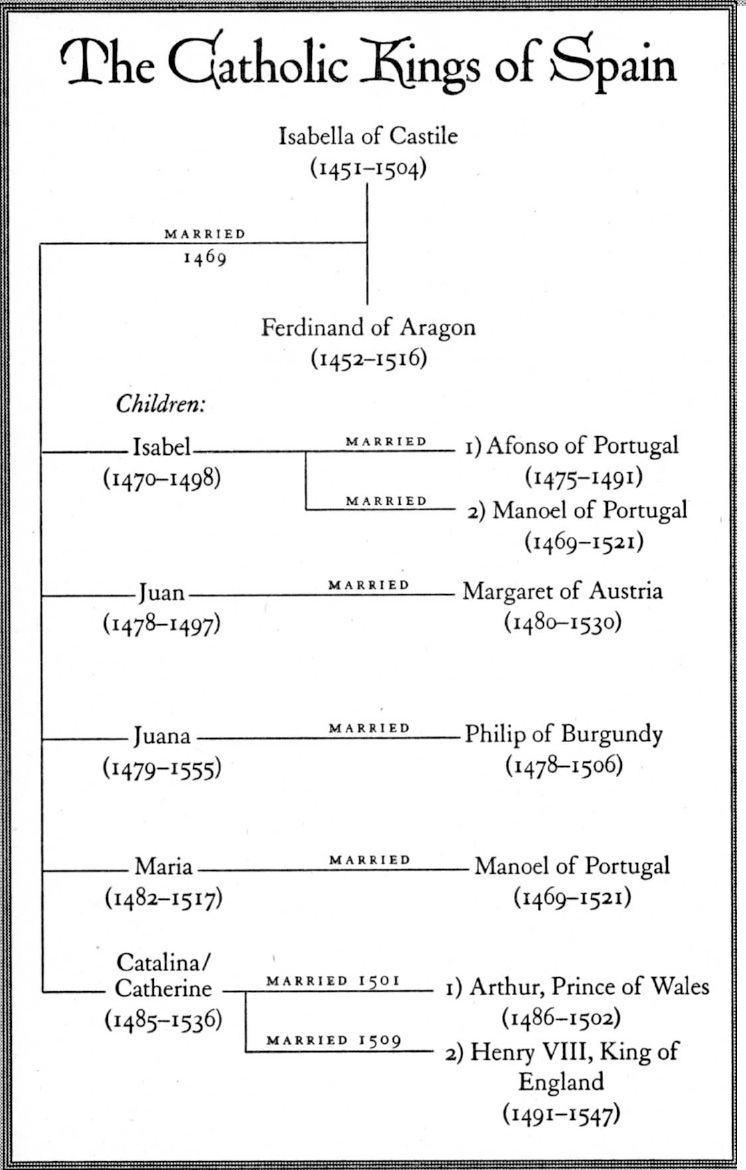 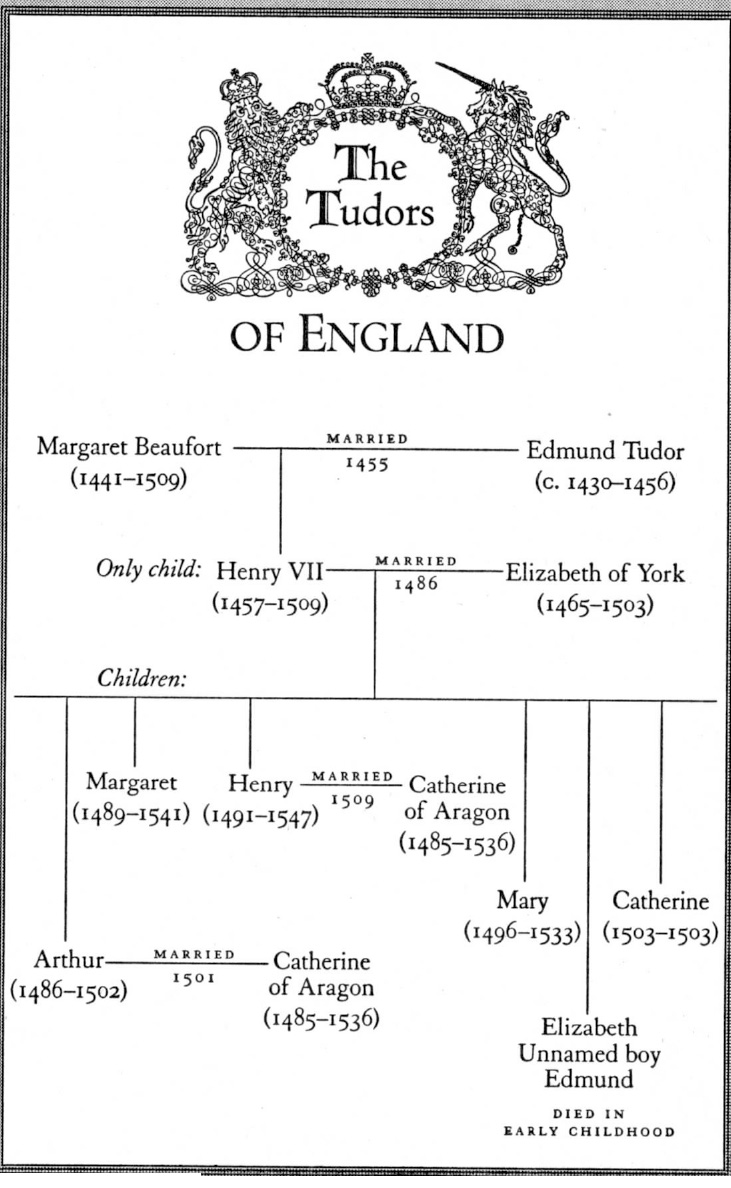 These words echo in the dark chambers of my heart, echo again through the halls of this moldering castle where my husband, the king, has made me a prisoner. How could he turn against me like this? The man I lovedâand love stillâhas forbidden me to see our daughter, Mary, forbidden me even to write to her or receive any messages from her. He has ordered most of my servants dismissed and sent away all but a handful of my loyal ladies-in-waiting. He has denied me all visitors save those he sends. Today he has sent Charles Brandon, duke of Suffolk.

Beyond this oaken door Brandon waits with orders from the king to exact an oath from my few remaining servants to address me as "the Princess Dowager." No longer may they call me Queen Catherine. Those who refuse are to be dismissed.

In this manner the king thinks he will break my will.

After more than twenty years of marriage, King Henry VIII demanded my agreement that our union was not and had never been valid, that I was not and had never been his true and legitimate wife, and that our daughter is, therefore, a bastard. This, so that he could divorce me and marry the witch, Anne Boleyn, and make her his queen. This, so that his new "wife" could provide him with a son and legitimate heir to the throne.

I am an aging woman, my forty-eight years weighing heavily upon me. But well I remember when my husband and I first met: he a mere boy of ten years, I six years older but still only a girl myself. I was young and eager, full of hope for the future. As it turned out, he
was
my future.

In the first years of our marriage, King Henry jousted with my sleeve on his lance and called himself "Sir Loyal Heart," proclaiming to all the world his love for me. As the years passed, I became his closest confidante, his most trusted adviser. My love for him grew, even when his affections strayed to other women. Although it wounded me deeply to know that one of them had borne him the son he so devoutly desired, I survived those wounds, for I was his wife.
I was his queen.

Now, after twenty-four years, all he wants from me is my compliance, my assent to release him from his marriage vows. He would have me remove myself to a convent and live out the rest of my days in prayer and contemplation. He would have me deny that I am the queen.

Anne, the woman he now calls "wife" and "queen," has borne him a daughter these three months past. They have named her Elizabeth. I can imagine his bitter disappointment. I can even imagine her despair, her apologies, her promises.

On the other side of the door to this chamber, Brandon, Henry's oldest friend, first pleads, then threatens.

"Tell my husband, the king, that I will not yield!" I call to him.

Brandon shouts, "If you do not yield, then I have orders to escort you to Somersham."

Somersham! A manor house even more remote and wretched than this dour place, surrounded by a stinking moat into which the garderobe empties.

"If you wish to take me, my lord of Suffolk, you will have to break down this door."

"You are the most obdurate of women!"

Silence ensues. From the latticed window of my chamber, I can look down upon the wild and desolate Fens where men have gathered from surrounding farms and villages, carrying scythes and pitchforks. They wait warily. They will not allow me to be harmed. My people love me, if my king does not.

It is deathly quiet. Perhaps the duke and his men have gone; likely they will return. I gather my memories. Our stories, Henry's and mine, are as intricately woven together as our livesâstories of love and loyalty, of betrayal and cruelty, and always, always, of loss. These are the stories I remember.

Henry, duke of York, raised his heavy longbow and squinted at the target. There was a sharp twang as he released the bowstring, a sweet whistle of the flying arrow, a mellow
thunk
as it struck just outside the center circle. Henry smiled. His brother Arthur, prince of Wales, grimaced. Henry, a wee\past his tenth birthday, already stood taller and stronger than Arthur, who was five years older. Henry was a better shot, too. This clearly annoyed his brother, as Henry hoped it would.

"What of Princess Catherine?" asked Henry, while Brandon took his shot, a deliberately middling one. "She is coming, is she not?"

"I do not know, York," Arthur replied glumly. "She was promised before you were even born. She was supposed
to marry me when I turned fourteen, and that was nearly a year ago. In her last letter she wrote that she would leave Granada in May. That was months ago, and as you can see, she is still not here." Arthur's shot was poor, worse than Brandon's.

Henry nocked another arrow. "She writes to you, then?" This time his aim was careless and the arrow hit wide of the mark, causing Arthur to smile. The smile faded when Brandon's next shot struck near Henry's first.

"Of course she writes to me. Her Latin is impeccable, and her handwriting is the most elegant imaginable." Arthur's next shot flew truer than the last, but no better than Henry's.

"Perhaps the letters are dictated by her tutors." Henry could not resist adding, "As are yours."

Arthur threw him a hard look. "My Latin is admirable."

"Not so good as mine, though." Henry's third arrow struck precisely in the center of the target; Brandon split Henry's arrow in two.

Arthur ignored Henry's remark, but when his third attempt missed the straw butt entirely, he stalled off toward the palace. Henry and their friend, Brandon, followed.

"Father is sending me back to the Marches tomorrow, did you know that?" said Arthur. "How lucky for you both, to remain here with the family, while I must live in cold and lonely old Ludlow Castle and pretend to exercise some authority over those wild Welshmen!" He slapped his glove against his thigh. "So far from London I might as well be in the Orient."

Henry rarely showed much sympathy for Arthur, who enjoyed their father's favor and all the privileges due a prince. Arthur would one day be king of England, while Henry would never be more than a dukeâa fact that often bothered Henry, who secretly believed he would make a much better king than Arthur. For a moment, though, he felt a tug of brotherly compassion.

"Soon Princess Catherine will come," he said, laying his hand on Arthur's thin shoulder, "and then surely you will be less lonely, and Ludlow will be endurable."

O
N THE MORNING OF THE SEVENTEENTH OF
A
UGUST
,
anno Domini
1501, I stood on the windswept deck, biting my lip to keep it from trembling. I stared at the shore to etch on my memory this last glimpse of my country. Tears blurred my eyes and threatened to spill over. Six full-rigged ships prepared to sail from La CoruÃ±a, the westernmost port city of Spain, carrying me and my entourage toward England.

The anchors rattled on their heavy chains, the sails snapped like gunshots as strong gusts filled them, and the tall masts creaked and groaned. Minstrels pranced about the deck, playing their guitars and flutes and tabors. Sailors shouted as they cast off the ropes, the last fragile ties with my homeland. Scores of knights and archers who had accompanied us on the three-month journey across Spain stood stiffly on the shore, growing smaller as the ships headed out to sea. Directly north lay my future as the wife of Arthur, prince of Wales.

The admiral himself had escorted me and my duenna, DoÃ±a Elvira Manuel, to the royal cabin that had been outfitted with every luxury. Before he left us, he assured us that we would be both safe and comfortable there.

"But, my lady princess," he had said, scanning skies that were milky blue but cloudless, "I can offer you no assurance of the weather. The Bay of Biscay is well known for its thunderous waves and turbulent seas and unpredictable winds."

For three days the winds held steady, and our little fleet skimmed over the calm surface of the water, the motion gentle and soothing. I strolled the deck, conversing with my favorite maids of honorâInez de Venegas, the most intelligent; Maria de Salinas, the bravest and most loyal; and Francesca de Caceres, the gayest, most high-spirited. DoÃ±a Elvira watched over usâbut especially meâwith the eyes of a hawk and the ears of a hare.