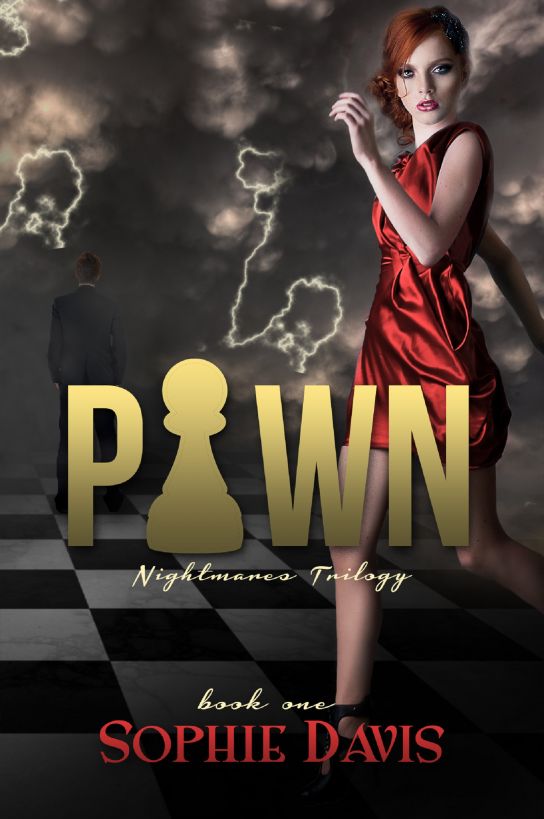 To Hannah, for never giving up on
me.

I peered over the edge of the cliffs,
squinting to glimpse the water below. The full moon cast just
enough light that the lake shimmered, the surface smooth as glass
and black as tar. Leaping off the rocky cliff and plummeting fifty
feet before plunging into icy water held no appeal to me right now.
I’d done it before, dozens of times even. Caswell Lake was a
regular summer hangout for my friends and me, but tonight the lake
felt unfamiliar, foreign even. While I couldn’t see the branches
and roots protruding from the rock face, I knew they were there.
Not to mention the ghost stories and urban legends associated with
the lake, the ones about dead bodies trapped below the murky
surface. In the light of day it was easy to ignore the tales, but
in the darkness images of pale corpses haunted my
thoughts.

“Stop stalling, Eel!” Devon Holloway,
my best friend, prompted, before taking a swig from her beer. She
winked one blue eye over the top of the can.

Rick was one of my least favorite
people, so his unwelcome teasing irked me more than it should
have.

“I’m not scared,” I retorted
defensively, turning away from the edge to glare at
Rick.

Devon’s jerk boyfriend downed the rest
of his PBR, crushed the can, and belched loudly. “Then what are you
waiting for?”

I silently cursed Devon and the two
others ― Elizabeth Bowers and Mandy Cowen ― for planning this
surprise birthday celebration. First the trio burst into my
bedroom, then blindfolded me, dragged me to the back seat of
Devon’s ancient Chevy, and finally brought me here to Caswell Lake.
A group of our friends were waiting in the woods with a roaring
bonfire and plenty of cheap beer and fruity wine
coolers.

Thankfully, Devon had thought at least
to grab my bathing suit while Elizabeth and Mandy hauled me from
beneath my comforter and stole the tub of mint chocolate chips that
I’d been enjoying. So at least I wasn’t standing in front of thirty
of my close friends wearing unmentionables ― that would have been
humiliating.

Elizabeth stepped forward, stumbling
drunkenly as she made her way to where I stood shivering in the
green two-piece. “You only live once, Eel,” she slurred, wrapping a
thin arm around my waist. Her long, blonde ponytail smacked me in
the face when she whipped her head around to look at me. “If it
makes you feel better, we can jump together.”

As nice as the offer was, I doubted
Elizabeth’s inebriated state would provide her with the wherewithal
to jump out far enough to clear the obstacles on the way
down.

“You should probably stay here, Liz,”
I told my friend kindly.

“We didn’t climb all the way up here
to watch you stand on that ledge,” Cooper Byrd, a good-looking
junior, called. He came to stand with Liz and me, slinging his arm
around Liz’s shoulders to support her. She was unsteady and close
to sending both of us tumbling over the edge. “Besides, you’re an
adult now ― man up!”

Unlike Rick, Cooper’s teasing was
good-natured; the soccer player didn’t have a mean bone in his lean
body. And he was right. My friends had gone to the trouble of
planning this celebration. Of course, diving off of a cliff hadn’t
been on the original itinerary. Booze, music, watching the guys
spit high-proof liquor into the bonfire, maybe a little swimming ―
that had been the plan. At least until some guy I didn’t even know
got it in his head that making the leap was somehow equivalent to
declaring my independence. His brilliant idea spread like wildfire,
and now here I was about to take the icy plunge.

“Jump, jump, jump,” Cooper began
chanting. Someone else started a slow clap that made me feel as
though I was about to take the game-winning foul shot in a
feel-good sports movie.

“You don’t have to do this if you
don’t want to, Eel,” Mandy spoke up tentatively, her words barely
audible over the others.

I gave my friend a small smile,
silently thanking her for her support. For Mandy, defying our peers
was a big step. She usually tried to go with the flow, never
disturbing the status quo.

“Jump! Jump! Jump!” The refrain picked
up speed, growing more insistent until the words blended together
in an indecipherable jumble.

I sighed, resigned to my
fate.
Now or never
, I told myself. To the expectant crowd, I called, “Okay, guys
- back up so I can get a running start!”

My proclamation was met with whoops
and cheers from my friends, and I laughed despite my growing
trepidation. I walked ten feet back from the ledge, stomach queasy
and head spinning.

Calm down. This is no big
deal
, I lectured myself.
The worst things down there are probably lost
bikini tops and stray sneakers.

“EEL! EEL! EEL!” The crowd chanted my
nickname over and over again.

With one last deep breath, I went for
it. Pebbles and dirt clung to my bare feet, and my heart hammered
against my rib cage as I ran towards the edge. When only six inches
separated solid ground from empty air, I leapt, pushing off with
all the strength I could muster. The free fall was exhilarating,
like the Tower of Doom at the Westwood County Carnival. Wind
whipped my auburn hair across my face, and an involuntary scream of
thrill and fear tore from my throat. I bicycle-kicked my legs,
anticipating the moment they would break the water’s surface. My
friends’ cheers were drowned out by the air whooshing in my ears as
my body dropped like a rock.

Much too soon the ride was
over. First my feet hit the cold water, followed by my legs and
stomach before my head finally dipped below the surface, abruptly
cutting off the scream still coming from my lips. Water washed over
my taste buds, a disgusting flavor of copper and fish, and I gagged
reflexively. A slimy vine slid over my right foot as I kicked for
the surface.
Not a dead body, not a dead
body,
I chanted inside my head.

I kicked harder, suddenly desperate to
get out of the water. The vine traveled up to my ankle and wrapped
around my lower leg. It felt like fingers were digging into my
flesh as it squeezed my calf muscle.

I started to panic.
Air, I need air. Surface, must get to the
surface,
I thought. Fear made me irrational
and I struggled against the hindrance that not only prevented me
from swimming upwards, but was now actively pulling me
down.

Think, Endora,
I ordered myself.
Don’t
lose it now.

I dove down and clawed at the
impediment encircling my leg. The vine was silky, smooth, and
impossible to tear. The pressure on my calf increased at the same
time a second vine coiled around my other leg. In the next instant,
something that felt like long, bony fingers intertwined with mine
in a perverse imitation of lovers holding hands. I twisted my
wrists, trying to wrench my hands free. Blood roared in my ears as
my heartbeat kicked into overdrive.

It’s your
imagination,
I told myself.

I opened my eyes, praying I’d find
myself tangled in a fisherman’s net or something equally benign.
Cold water stung my eyeballs, immediately making me regret the
decision. The water was dark, murky with limited visibility. Lack
of oxygen must have made me hallucinate, because I swore that eyes,
shiny and black like polished pebbles, stared directly into mine.
The eyes were set deep in a face so white that it emitted an
ethereal glow, illuminating the mass of blue-black braids sprouting
from the creature’s head. Those braids flowed all around me with a
life of their own, slithering through the water to coil around my
legs and arms.

The scream I let loose came out
garbled, and air bubbles floated in the space between my face and
the hideously beautiful creature. More of that awful-tasting water
filled my mouth.

No, no, no! This can’t be
happening
, I thought with increasing
terror.
This is not
real
. I closed my eyes, started counting to
ten, and prayed the imaginary attacker would be gone when I opened
them. Three. I was on three when those slimy fingers released mine,
moved to my throat and began to squeeze my windpipe.

My chest burned and my head was fuzzy.
The little air that remained in my lungs was quickly running out,
but now that the creature was actively squeezing the life out of
me, it hardly mattered. I tried to dig my nails into the fingers
around my throat, but the creature’s skin was rubbery and my nails
couldn’t grasp hold. My attempts were feeble at best.

Terrified by the hallucination and
frustrated by my inability to save my own life, I began to thrash
about wildly. A sharp pain in the sole of my left foot temporarily
cleared the cobwebs in my head, and I doubled my efforts to break
free. My chest ached with the need for air, and my limbs were
heavy, as if the blood had turned to lead in my veins.

I threw my head back, craning my neck
in a last-ditch attempt to sever my attacker’s hold. A sharp point
pierced the base of my skull. Stars exploded behind my closed lids.
A melodic male voice whispered in my ear, “Welcome back.” Then
blackness consumed me and I felt nothing.

Devon once told me that drowning was
an excruciating way to die ― she’s a wealth of useless knowledge.
It wasn’t, though. Floating, weightlessness. That was what drowning
felt like.

Tingling started around my midsection
and the back of my knees. At first, the sensation was pleasant. But
as feeling and awareness returned, it felt like barbed wire was
wrapped around my stomach and legs, each barb pricking my skin over
and over again. A strange buzzing noise, like the hum of an old
radiator, filled my ears.

I struggled weakly, and the wires
tightened.

“You’re safe,” a voice assured
me.

All concepts of space and time ceased
to exist. One minute the pins-and-needles feeling was all
consuming. The next it was gone, replaced by a coldness that seemed
to seep through my pores and settle in my bones. I trembled
uncontrollably. The shaking was so violent that my teeth clanged
together. I tried to speak, but my lips were too numb to form
words.

“This should help,” the voice
said.

Soft fabric was draped over me,
forming a protective barrier between the chilly air and my exposed
skin. The scent of Old Spice filled my nostrils, triggering
memories of my father, who used to wear that brand of aftershave.
Tears prickled behind my eyes. My father - I hadn’t talked to him
today. I always talked to him on my birthday.

“Shh. You are going to be okay,
Endora,” the voice soothed.

Strong arms lifted me, one under my
shoulders and one under my knees. My cheek pressed against
something hard and wet, and the piney Old Spice smell intensified.
I inhaled deeply, breathing in the scent and thinking about how my
father used to carry me to bed after I’d fallen asleep on the
living room couch.

The sudden influx of air was too much
for my oxygen-deprived organs. I began to cough, my stomach roiled,
and my mouth began to water in that way it does right before you
throw up.