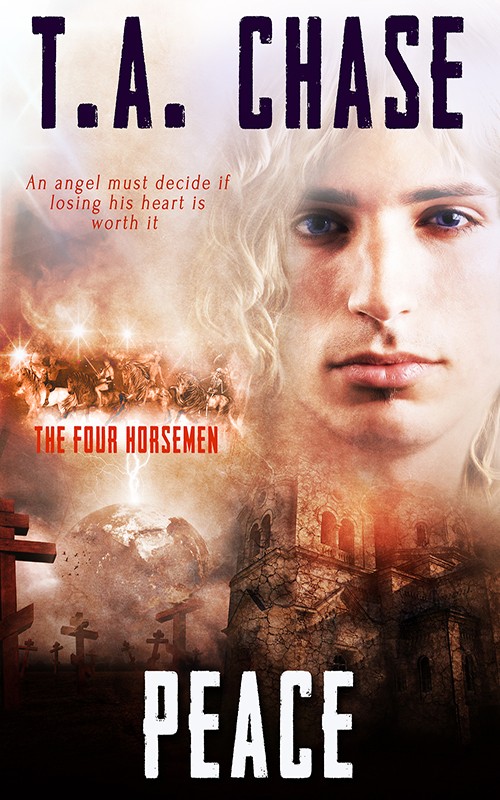 All rights reserved. No part of this publication may be reproduced in any material form, whether by printing, photocopying, scanning or otherwise without the written permission of the publisher, Pride Publishing.

Applications should be addressed in the first instance, in writing, to Pride Publishing. Unauthorised or restricted acts in relation to this publication may result in civil proceedings and/or criminal prosecution.

Pride Publishing is a subsidiary of Totally Entwined Group Limited.

When falling in love means risking everything, an angel must decide if losing his heart is worth it.

Lam is an Agnus Dei—or a messenger angel—who deals with mortals and the Four Horsemen. He’s helped them to find love and become mortal again, but he can’t seem to figure out his own relationship. Of course, it would be so much easier if he hadn’t fallen for Lucifer Daystar, the most infamous angel out there.

Lucifer Daystar has loved Lam since the moment he saw him. They’ve hidden their relationship since Lam isn’t supposed to fraternize with Day. He wishes things could be different, but he won’t risk Lam getting into trouble for being with him. Then one day Lam disappears and Day must search the world to find him.

By the time Day rescues him, will Lam have decided that loving a fallen angel isn’t worth the pain?

While I know the Four Horsemen should mean there are only four books, I couldn’t help but think Lam had his own story to tell. So here it is along with another fallen angel who might have learned his lesson.

“Are you going to help every Horseman to find love? I mean now that you did it for these four?”

Lam turned to see Day standing there, hands propped on his hips and a puzzled expression on his face. Smiling, Lam reached out to touch Day’s cheek. “Why? Are you jealous of them?”

Day shook his head. “No. Of course I’m not. Why would I be jealous of them? They’re mortals now, not anywhere near as powerful as me on my worst day.”

“You are jealous because I spent so much time with them,” Lam said as he edged closer. “But you should’ve known you were far more important to me than they are.”

After nuzzling Lam’s palm, Day shrugged. “I can’t help it. I’m terrified you’re going to come to your senses and leave me—or at least, never want to see me again.”

“I’m risking my entire existence to be with you. Do you think I’d just leave you behind?” He tapped Day’s nose then stepped away from him. “You don’t have a lot of faith in me, do you?”

“That’s not it,” Day protested as he tried to grab Lam. “I do have faith in you.”

Lam raised his eyebrows, doing his best to show his doubt without saying it. Day sighed.

“Fine. I guess you’re right. I don’t have enough faith in you.” Day rubbed his hand over his hair then he turned to glance over the barren landscape they stood in. “I’m sure you could probably say it has something to do with the fact that no one’s ever stood by me in my entire existence.”

Day covered his hands with his own and squeezed. “Sorry. I’m having a bad day.”

“Exactly how does Lucifer Daystar have a bad day?” Lam snorted. “I’m pretty sure the worst day you’ve ever had was when you were banished.”

“Take me out of here. Let’s go somewhere we can be alone without someone spying on us.” Lam loosened his grip as Day turned around. He brushed their lips together and darkness over took them.

Later on that night as Lam climbed out of bed, Day grabbed his hand and the angel paused to glance down at him. Day flashed him a wistful smile.

“Do you think there’ll ever come a day when you stay until morning and don’t sneak out like a thief in the night?”

There was a deep well of sadness in Day’s dark eyes that touched Lam’s heart. After leaning down, he brushed a kiss over Day’s mouth, savoring his familiar flavor. He eased away. “I don’t see how that’ll be possible. I wish it could be, but you went against them, Day, and they’ll never forgive that.”

Exhaling, Day rolled onto his back and stared up at the ceiling. “I won’t apologize for that either. I did it because I thought it needed to be done. Little good it did me. Got thrown out of the heavenly realm. Banished to Earth and having to deal with mortals. Ugh!”

Lam couldn’t help but laugh at the disgust in Day’s voice. “Tell me how you really feel about mortals.”

Day tugged on his hand, but Lam stood firm. He had to leave, or risk someone coming to find him. He couldn’t be found with Day. As much as he wished it could be different, he knew it would never change.

“Why do you keep letting me make off with you?” Day pushed up until his back rested against the pillows. He let go of Lam’s hand to fold his in his lap. “I don’t understand why you don’t just run as far away from me as you can. I mean, it’s not like you can’t get away from me. Hell, all you have to do is go back to the heavenly realm. I can’t follow you there.”

Lam didn’t have a real answer for that. Day was right. He could go home if he found Day too annoying or if he hadn’t wanted anything to do with him. Yet Lam never thought about turning his back on Day. Not really. Oh, Day had annoyed him a million times since they started their relationship, but not enough for Lam to say enough.

Day shook his head. “I’d never do that to you.”

“Of course you wouldn’t.” Lam patted Day’s shoulder. “You’re not that kind of guy. No matter what any of them say about you.”

“I can just imagine what they say about me.” Day held up his hand to keep Lam from saying anything else. “Give me a kiss and get out of here. I don’t want them to know you’ve been with me. I’ll catch up with you some point soon.”

Lam did as Day ordered, kissing him hard before moving to the middle of the room. He gathered his powers, thought about his rooms in the heavenly realm and released the magic. He kept his gaze on Day as he disappeared.

Once he reappeared in his rooms, Lam waved his hands and his clothes faded. He padded over to his bathroom, needing a shower. After washing up, he wandered back to his bed then flopped onto the mattress, burying his face in the pillow. He did his best to release all the tension from his muscles. He enjoyed every moment he spent with Day. Well, most of them anyway.

But there was always the little voice in the back of his head telling him to be careful. He was risking everything—maybe even his life—for those stolen seconds with Day. If the Quad—the four archangels—found out about his being with Day, they would lose their minds. Lam had no doubt about it.

Especially Michael, who seemed to harbor the most anger toward Day. Lam thought about the first time he’d seen Day. He’d walked into Michael’s office and smack dab into an argument between the two of them.

Lam pushed open the door to Michael’s office, mouth open to greet the archangel, then he froze at the sight of Lucifer Daystar and Michael standing almost nose to nose. Michael’s face was beet-red and his anger palpable.

“What the hell were you thinking, Lucifer?” Michael yelled.

Ducking his head, Lam started to edge back out of the door. He didn’t want to get in the middle of this argument. Not when it contained the two most powerful angels in the heavenly realm. He was just a lowly messenger angel and anything they were discussing was above his pay grade.

Suddenly Lucifer met Lam’s gaze and he froze, shocked by the flare of heat in his eyes. Lam had never been this close to Daystar before, though he’d seen him at a distance. Far more beautiful than any of the other archangels, Lucifer Daystar shone like his name. Bright and burning. Something shifted deep in Lam’s soul. Then he blinked.

“I was thinking that you’re overstepping your bounds, Michael.” Lucifer turned away from him and Lam took a breath.

He took advantage of no one looking at him to slip back out of the office. Leaning back against the door, he inhaled and fought the urge to slide down to sit on the floor. He could still hear Michael shouting through the door, but if Lucifer replied, his voice was too low to understand.

What was going on between those two? At one point, Michael and Lucifer had been the closest of friends. Then, almost overnight, they were at each other’s throats. Lam had no idea what had happened since he wasn’t around the heavenly realm a lot. He spent most of his time moving among the mortals, taking them messages then handling the Horsemen.

Once he got hold of himself, Lam pushed away from the door before strolling over to where Michael’s personal assistant angel sat. He left a note on what he’d been about to report to the archangel then headed back out on his next mission. Lam didn’t believe he would ever see Lucifer again.

A noise drew his attention away from his memories. He opened his eyes to see a shadow standing next to the bed.

“Who are you?” he asked right before a hand landed on his forehead and his vision went black.

Lam peered up through the stringy locks of his blond hair to see a man staring down at him. Blinking, he tried to focus on those dark eyes, thinking the man looked familiar, but not able to work it out amidst the pain.

He flinched away when the man crouched next to him. Any kind of touch was going to feel like knives stabbing deep into his skin. “I know you, but I can’t remember why I should, or who you are,” he admitted.