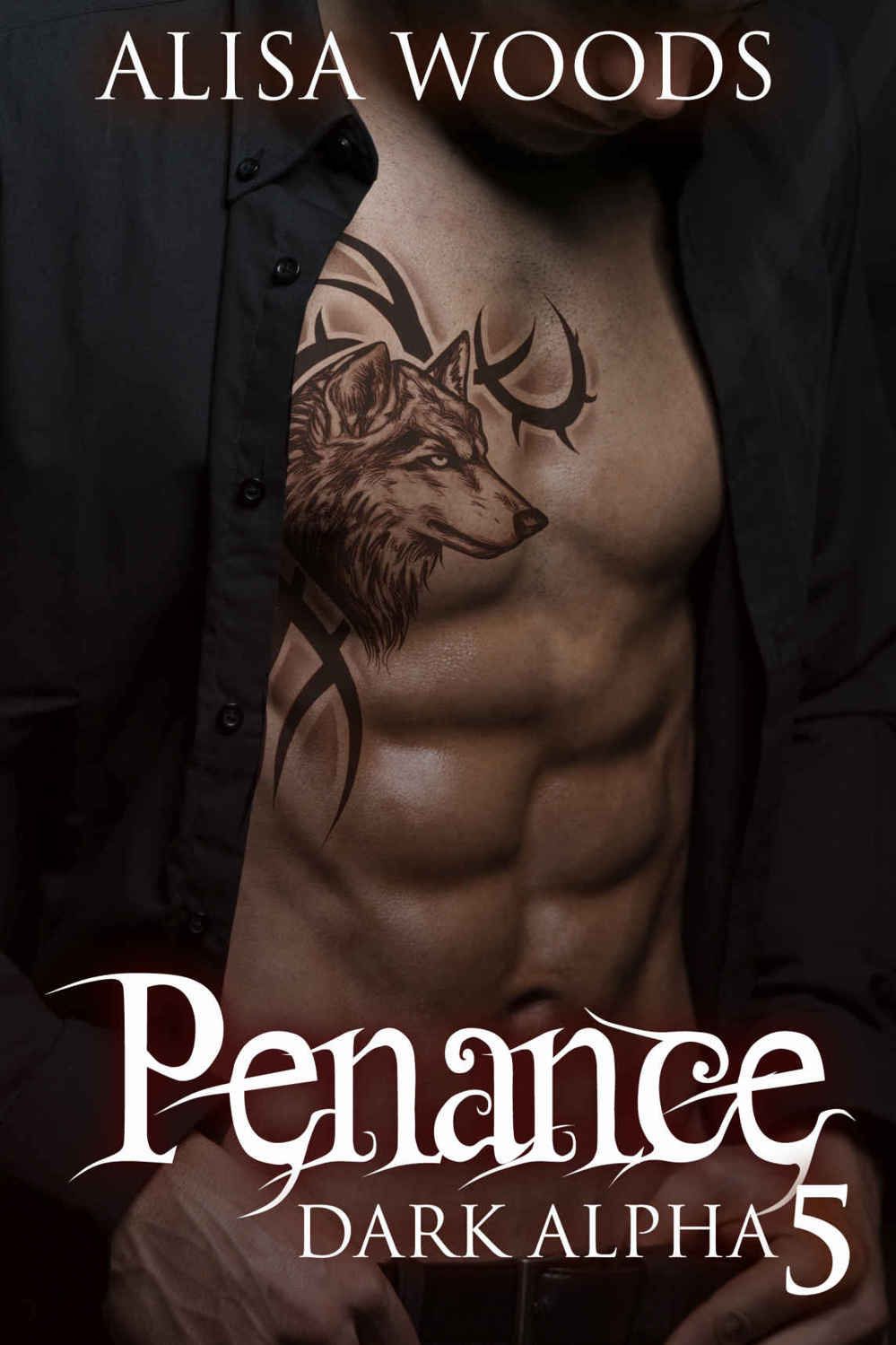 Shifters live in the shadows of Seattle, just under the skin of the alpha male, dot-com entrepreneurs who are building a new Silicon Valley in the Emerald City.

Jak's plan is a dangerous one... but will he even get the chance to carry it out?

Is love stronger than magic? Or will breaking an unbreakable bond destroy them both?

Penance
(Dark Alpha 5) is 60 pages or 15,000 words.
It’s the fifth of six episodes in the
Dark Alpha
serial.
Dark Alpha
is the sequel series to
True Alpha,
the debut shifters-in-Seattle paranormal romance from Alisa Woods.

GET THE LAST DARK ALPHA EPISODE!

Jak hesitated at the door of the witch’s office, now closed behind him.

He was trading sex for her cooperation—with Arianna’s family, with the spell to break Mace’s hold on her, and with everything that was going down in the next hour. He had to leave Circe more than satisfied to get the things he needed. His chest was still heaving from the run over to Morgan Media, but that wasn’t what cinched it tight: it was the idea of fucking a witch to save the woman he loved. A woman who had just strengthened him to the core with her submission, giving herself completely to him. It wasn’t the fact that the witch could kill him with a touch of her dark-magic fingers—it was breaking his heart that Arianna might find out. If not now, if not right away… eventually.

He prayed she would forgive him for all of it.

He swallowed down the sourness in the back of his throat and tried to picture Circe as just another hookup at the club. Sex with her didn’t mean anything. He’d get it up, get it done, and get out. And wash away any trace afterward, hoping to God Arianna wouldn’t scent the witch on him before he could carry out the rest of his plan.

Jak strode across Circe’s office to where she stood, leaning against her desk and licking her lips. Her blue eyes were lit up, and she was checking out his package like she had x-ray vision that could see right through his jeans. Her eyes grew wider as he approached. He didn’t waste any time, simply grabbed hold of her hips and lifted her up on the desk. Her legs spread, and her filmy red dress rode up her bare thighs. He shoved his crotch against hers, hoping to jump start things there. Getting it up might not be as easy as it normally was.

Circe let out a little squeak of surprise, but he figured that’s what she wanted: she had a hunger for sex with a wolf for a reason, and it wasn’t because she wanted
gentle.
He held her tight against him, crushing her ample chest to his, and started feasting on her neck. A strangled moan and pricks of daggered nails clawing at his back told him he was headed in the right direction. He slid a hand up her thigh, shoving aside the silky fabric and going right for the heat between her legs. She was bare—either witches went commando all the time, or she had already discarded her panties, knowing he was on the way. She arched her back and gasped as his fingers found her nub.

He lifted his head from nipping at her neck. Her eyes were already hooded with lust, lips parted, and a flush was creeping across her cheeks. She was actually insanely beautiful—all witches were. If they weren’t so deadly, and generally would prefer castrating wolves to fucking them, he probably would have slept with one already. As it was, he had to work to convince his cock to pay attention to the scent of her arousal, which was quickly filling the room. He palmed her breast, hoping the heavy weight of it in his hand might help. Her head dropped back as he worked her stiffened nipple through the thin sheath of her dress. She was definitely curvy in all the places that would normally gain his cock’s attention: full, perky breasts, begging for his lips; ample hips for a good grip while he slammed into her. Her face was beautiful and harsh, like a terrible angel—all angled lines, high cheeks, and perfect skin that was now flushed a delicate pink. Gasps came through her parted lips. He was a little relieved to find his cock straining against his jeans, finally responding to her obvious lust.

He gave her a moment more of pleasure, teasing her entrance with his fingers until she was bucking against them, then pulled back: he needed to make sure they were clear on their agreement before they got too far. He took one of her hands from where it was digging into his shoulder and pressed it against his cock, through his jeans. The contact was enough to make it twitch in response. He rubbed her hand up and down the length to make sure he could deliver… and to make a not-so-subtle promise. She moaned, and her eyes drifted closed.

“Is this what you want, little witch?” he whispered, his voice even huskier than he had intended. Maybe he could do this, even if the idea sickened him. He shoved that thought away.

“Oh God, yes,” Circe breathed. She grasped hold of his cock through the jeans fabric, stroking him and making him harder. “I want all of you. Now.”

He grabbed her hand by the wrist and pulled it away. “I’m going to give you everything you want and more.” He growled out the words, which just made her squirm against him. “But first, I want to be absolutely clear about what you’re giving
me
when we’re done.”

“I already called the family. They’ll be here soon.” She clawed at his pants, trying to slip her hand inside. He pulled her hand away again then pushed her body flat against the desk, hauling her bare sex against the rough fabric of his pants while holding her hands over her head with one hand. It was the perfect position to torment and tease her, and his cock stiffened even more in response. Circe gasped with it as well, arching her back and shoving her breasts up.