Read People of the Raven (North America's Forgotten Past) Online

People of the Raven (North America's Forgotten Past) 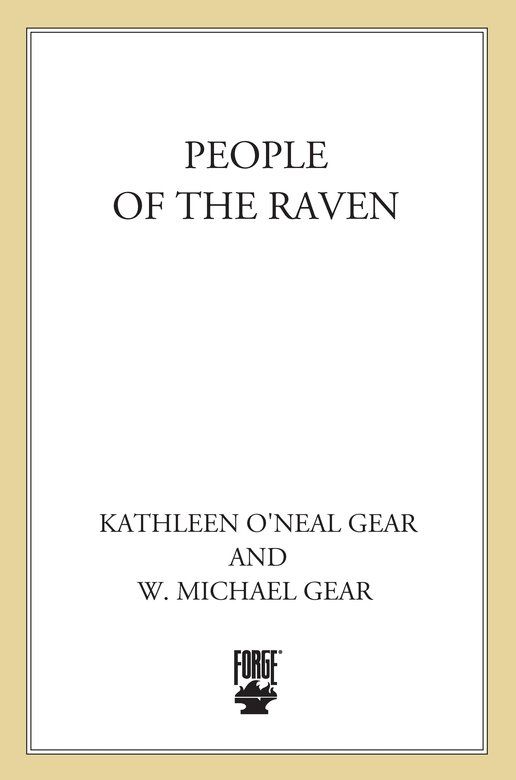 Acknowledgments
We could not have written
People of the Raven
were it not for the work of Jim Chatters, Doug Owsley, Robson Bonnichsen, Alan Schneider, James Dixon, Richard L. Jantz, Silvia Gonzalez, Jose Concepcion Jimenez Lopez, W. A. Neves, and others who have worked to recover meaningful information on early Caucasoids in the Western Hemisphere.
The Hot Springs County Library ran down obscure articles that were critical for this work. Our thanks go to Tracy and B.J. You are an asset to our community.
The efficient staff at the Holiday Inn of the Waters in Thermopolis reserved our special table when we escaped for Guinness, succulent buffalo patty melts, and jalapeños. Thanks to Mary, Jake, Dawn, Jimmy, Kenny, Karla, Howard, and the crew.
Finally, we wish to thank our editor, Bob Gleason, for his enthusiasm for the book, Eric Raab, for tending the manuscript, and Deanna Hoak, for her superb copyedit.

Foreword
I
n the fall of 1996, Dr. Jim Chatters, adjunct professor at Central Washington University and deputy coroner for Benton County, Washington, sent an urgent e-mail to several American anthropologists saying, “Subject: Need Help ASAP.”
He had in his hands an archaeological discovery that would rock the nation, and he knew it. The specimen would come to be called “Kennewick Man,” and prove to be one of the most controversial archaeological finds in the history of the world.
When Kennewick Man was discovered eroding out of the banks of the Columbia River, it appeared to be a simple case. Obviously he was a Caucasoid male, forty-five to fifty-five years of age, probably a White pioneer.
Then a CAT scan revealed a “Cascade” point—a distinctive leaf-shaped prehistoric spear point—embedded in his hip. Shortly thereafter, the radiocarbon laboratory at the University of California at Riverside returned their analysis of the date: Kennewick Man was between 9,200 and 9,500 years old.
A Caucasoid man in America more than 9,000 years ago? Weren’t we all taught that only “Indian” people, that is, Mongoloid people, were here that long ago?
This was a stunning find that had the potential to completely rewrite our understanding of the peopling of the Americas.
Five days after the radiocarbon dates were released to the public,
the Army Corps of Engineers—upon whose land Kennewick Man was found—ordered Jim Chatters to immediately halt all scientific studies and relinquish the bones. In the end, the Corps would defy orders from both Houses of Congress to leave the site alone and would cover the Kennewick Man archaeological site with six hundred tons of earth and debris. They even planted thousands of trees on top of the fill to stabilize it, very effectively concealing any undiscovered evidence that would spark additional questions about who Kennewick Man was and what he was doing in America more than 9,000 years ago.
You may think this smacks of lunacy, or at least a loathing of scientific inquiry that borders on madness. But we’re dealing with a complicated story here. Let’s talk about the facts.
After the radiocarbon dates became public, an alliance of five northwestern tribes—the Umatilla, Yakima, Nez Perce, Wanapum, and Colville—claimed the remains under the 1990 Native American Graves Protection and Repatriation Act, demanding that the bones be turned over to them for reburial without further study.
Why would the tribal alliance claim a White man?
Armand Minthorn, Umatilla leader, said, “Our oral history goes back 10,000 years. We know how time began and how Indian people were created. They can say whatever they want, the scientists. They are being disrespectful.”
Eight scientists, in
Bonnichsen et al. v. United States of America
, sued to be able to study the remains.
The meetings of the Society for American Archaeology and the American Association of Physical Anthropologists were spiked with bitter acrimony. Since no scientists were allowed to see the remains—because they might be able to study Kennewick Man with their eyes—the vast majority of conference attendees were high on hearsay.
Next, enter the Asatru Folk Assembly.
The Asatru, based in northern California, trace their ancestry to pre-Christian Scandinavian and Germanic peoples. In their publication,
The Runestone,
they wrote, “Native American groups have strongly contested this idea, perceiving that they have much to lose if their status as the ‘First Americans’ is overturned. We will not let our heritage be hidden by those who seek to obscure it.” They filed suit to have Kennewick Man—whom they believed to be
their
ancestor—turned over to them.
Archaeologists around the world shouted their approbation.
Not so much because they agreed, but because the Asatru lawsuit begged a very important question: Do some religions in America have
precedence over others? Do certain racial or ethnic groups have the right to certain archaeological sites? Should Canada return the Viking archaeological sites dating to around A.D. 1000 to Canadians of Scandinavian heritage? Should the United States return all Hispanic archaeological sites to people of Hispanic heritage? Should the African-American sites administered by the federal government be turned over to African-Americans? If so, which people or persons? Is one-eighth blood enough? Does it have to be based on ethnicity? What about the beautiful historic Catholic missions in the California State Parks system? Should the state of California be forced to turn them back to the Catholic Church? And what happens to those sites once they’re turned over? Is it all right if these groups destroy them?
The debate isn’t finished by any means.
The battle over Kennewick Man has been long and arduous. As we write, a federal judge has just overturned the Department of Interior’s decision to give the ancient remains to the coalition of Indian tribes for reburial. The Department of Interior has appealed.
Will we ever know the fate of the Caucasoid peoples who first inhabited the Americas? Who they were? How they got here? What happened to them?
We may still have a chance. British scientists working in Mexico have discovered two skulls, both older than 12,000 years, which appear to be Caucasoid. Dr. Silvia Gonzalez, of John Moores University in Liverpool, says, “It looks like some of the most ancient Paleo-Americans were not of Mongoloid affinity and therefore perhaps not directly related to modern Native Americans.” Working in conjunction with Jose Concepcion Jimenez Lopez, curator of Mexico City’s National Museum of Anthropology, she is in the process of analyzing the remains, including doing DNA research. No matter what they find, their work will greatly enrich our understanding of the ancient peoples of the Americas.
Will we ever have the freedom to do that kind of study in the United States?
It is clear to us now that the only people who can answer that question sit on the bench of the Supreme Court of the United States of America.
We hope that the Court will see that the rich “melting pot” history of America is too precious to allow it to be annihilated by religious fundamentalism—of
any
variety.
—KATHLEEN O’NEAL GEAR and W. MICHAEL GEAR
January 2004