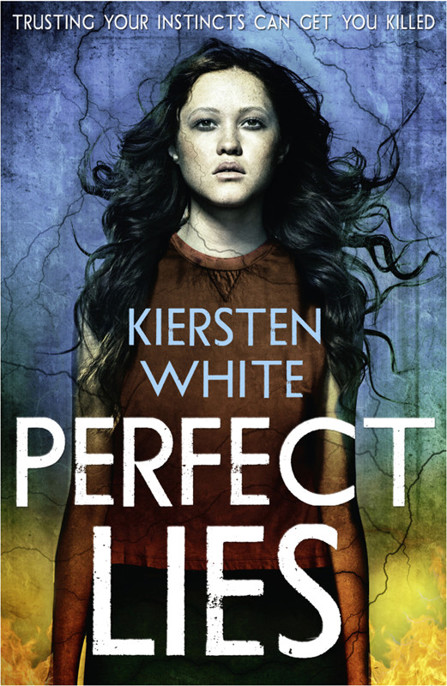 For Noah
My past, present, and future

Annie: Three and a Half Months Before

Annie: Two and a Half Months Before

Annie: Two and a Half Months Before

I can’t think about her, not ever. It isn’t safe.

But when I’m asleep, no one can listen to my thoughts. I’m still afraid to sleep—too many ghosts peering creeping condemning. Sometimes though, the good times, I get Annie.

Phillip Keane is gone, his webs destroyed, everything smoking and charred in beautiful ruins around me. We’re safe. It’s over.

But my hands are red, they’re still so red I can’t look at them, can’t see them, can’t breathe.

And then Annie is there. She’s too young. I know she doesn’t look like that anymore, but her face is open and innocent and clean. She wraps her hands around mine, so that I can’t see the red anymore. We’re
together
, and when we’re together, all these things I’ve done, they don’t matter anymore because they were worth it.

If I were Annie, I’d know whether this was a real future. All I know is it’s the only one I want, the thing that keeps me going.

I will make that future happen.

SHE DIDN’T KILL ME.

I was ready for the knife. I’d made my peace with whatever Fia needed to do to be okay. But … she didn’t kill me. I try to keep my breathing shallow and hidden, try not to flex my fingers over the phone, though I want to.

Two minutes ago I knew she was going to kill me.

After all this time, I can See and know everything, and still know nothing at all.

How long am I going to have to lie on the ground? Is she coming back yet? My hip aches where it rests against the concrete, and people must be staring. I can hear them around me, footsteps, voices. Someone has to have noticed.

I hear the thud of hurried footfalls, then feel someone kneel next to me and let off a string of whispered profanity, soft and sad like a prayer.

A warm finger brushes against my neck fearfully, then puts firm pressure over my pulse. This time he swears loudly in surprise and … anger? He’s mad that I’m not dead? “Are you okay?” he asks.

Hoping, trusting that this is part of Fia’s plan, I move my lips as little as possible. “Shh,” I whisper. “I’m dead.”

There’s a pause, and then arms go under my knees and behind my shoulders. I try to keep my body limp as I’m lifted into the air and cradled against a chest. I let my head and arms loll, still cradling the phone in the hand that’s wedged between my body and his. I’m embarrassed about how hard I must be to hold, but I’m not breaking Fia’s request until she tells me otherwise.

I need you to be dead.

“It’s okay. My sister’s epileptic. She’ll be fine,” I hear him say. I wonder who he is, where he’s taking me with such a determined, slightly uneven limping stride.

He carries me for what feels like way too long, the warm sun playing on my skin cut through with an occasional breeze. Then I feel the whoosh of artificial air as we enter a building.

Without a word he lowers me to the floor. I rub my neck where it’s cramping from hanging in a weird position.

“Where are we? When is Fia getting here? What’s the plan?” I lean forward expectantly.

I flinch away from his tone. Fia’s cell phone rings and I fumble, unsure what button to push. With a huff he takes the phone from my fingers, then shoves it back.

“Fia?” I’m trembling and out of sorts beyond anything I’ve ever experienced. I got up this morning expecting to die. Now I’m somewhere I don’t know, with someone I don’t know, and all I have is a phone.

“Who is this?” a soft, male voice asks. A voice I instantly recognize from one of my visions.

I put a hand to my mouth. Adam. I’m on the phone with Adam, the guy I personally arranged to have killed. The guy Fia spared. The guy who, according to my vision, is now in cahoots with the Lerner group. Fia delivered me to Lerner, the same group that drugged and kidnapped her.
After
shooting her in an alley.

“Umm, hey.” How does one start a conversation with a guy she tried to have murdered? “This is Annie? Fia’s sister?”

A soft voice, a woman’s, murmurs in the background on his end. “Where are you?” Adam asks, brimming with happy excitement, unlike my angry companion. “We’ll come get you two!”

I lower the phone and talk in the general direction of the guy who carried me here. “Where are we? They want to come get us.”

“Give me the phone.”

I hold it out and feel it once again snatched from my fingers. His voice gets quieter as he walks away but retains its low intensity. I stand, trying not to feel awkward, wondering where we are. The doors open and someone walks past with a quiet “Excuse me.”

I back up a few steps, hoping that I’m not in the middle of some hallway, and increasingly annoyed with Angry Guy for abandoning me here.

“Sorry, sir,” a woman says over Angry Guy’s continued hushed conversation. “You can’t use your phone in the library. Please step outside.”

I hunch my shoulders and shove my hands into my pockets, hoping they’re not both looking at me. I wish I were wearing my sunglasses. Where are you, Fia? Hurry up so you can explain what’s going on and what we’re doing next.

“Here,” he says right next to me, making me jump. “Here.” The second time he says it a little softer and I finally clue in and hold out my hand. He gives the cell back, and I stick it in my pocket. Then … nothing. He says nothing.

“No. Fia is not meeting us here.” His words have a strange quality, like they’re being forced through clenched teeth.

“I’m sorry,” I say, glaring because I’m not sorry, I’m frustrated. “I’m not up to speed on what’s going on, and I’d really like to be clued in.”

My heart thuds fearfully in my chest. “But … I thought … I mean, you were part of it. You picked me up.” Oh, no. Oh, no. I gave him the phone. For all I know, he was delivering a threat or a ransom demand. All Fia did was give me the phone, which was meant to connect me with Adam. Not whoever this is. Tears brim in my eyes.

Besides stab the guy.

“I’ll scream,” I say, standing straighter and facing him. “You shouldn’t have brought me to a public place. Leave now or I’ll scream.” I pull the phone back out of my pocket and feel for bumps on the buttons, hoping the call feature will be prominent and that it saved Adam’s number. “I won’t be leverage, not for you or anyone else.”

He swears, then grabs my fingers. I nearly shout until I realize he’s pressing my index finger onto a button. I hear a number dialing.

“Crazy must run in your family,” he says.

“You
do
know Fia!” I blurt, then bite my lip. He exhales in a silent laugh at my immediate association of crazy with my own sister.

“She stabbed me in the leg.” Well, guess I was right about what Fia would do. “Then I shot her. Then I helped bring her in, against my better judgment, and let her see what we do. And
then
I followed her after she attacked me and ran. I got to watch as she murdered an innocent girl because I didn’t stop her.”

I hear Adam saying “Hello?” but don’t put the phone up to my ear. This guy’s anger makes no sense. If he’s with Lerner, and that’s where Fia wants me, why is he so mad?

“Not for the minute it took between watching you fall and finding your pulse.”

“Oh. I’m sorry.” I mean it. I wasn’t thinking about what it must have been like for him. “If it makes you feel any better, I thought I was dead, too.”

“Why would that make me feel better?”

The sliding of glass doors precedes Adam’s voice. “Cole! And you must be Annie?”

Hearing Adam in person is different from on the phone. I’m flooded with memories of the visions I’ve had of him—the one where I saw girl after girl with abilities being brought into the light and then disappearing into darkness, while Adam’s name bounced around my skull, ricocheting painfully. And the other one, later, where I saw his face. I am meeting a guy whose name and voice I can put a face to. Other than James and his father, that has never happened to me.

It’s too much, all of it. I don’t know how to feel, what to think. I’m not with my sister, who I thought was going to kill me today. Instead, I’m with the guy I tried to have killed. The guy who spells disaster for hundreds of girls like me. The guy whose voice is kind and whose gentle face I will forever be able to see.

An arm comes around my shoulder and I jump.

“She didn’t tell us anything,” the woman says. “Do you have any idea what she’ll do next?”

Casino Infernale by Simon R. Green
Powerful Magic by Karen Whiddon
Gently with the Ladies by Alan Hunter
Katie and the Mustang, Book 2 by Kathleen Duey
G-Spot by Noire
The Rival Queens by Nancy Goldstone
Her Father, My Master: Mentor by Mallorie Griffin
Duplicity (Spellbound #2) by Jefford, Nikki
Dark Moon by Elizabeth Kelly
Rudyard Kipling's Tales of Horror and Fantasy by Rudyard Kipling
Our partner