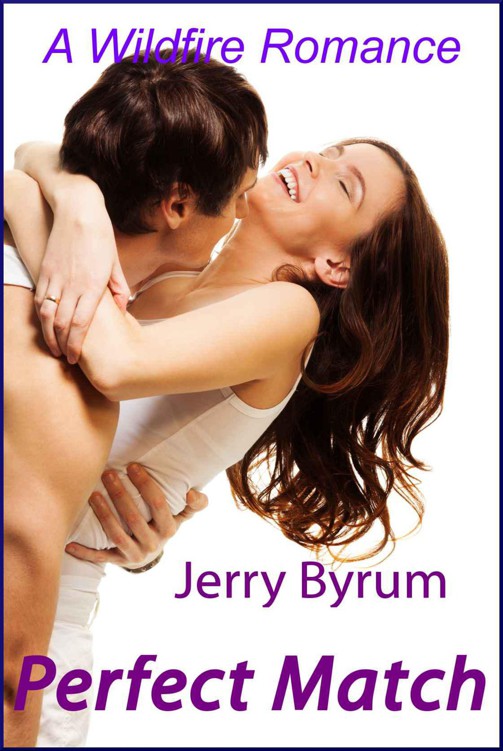 “This one is as good as they come.”

“Loved it! An interesting read with a lot of twists.”

“HOT SNOW is a stimulating and thought-provoking read.”

“This romance is really a Perfect Match!”

“PERFECT MATCH is even better than DILEMMA.”

“Byrum has been able to combine a love story and a medical
miracle.”

“PERFECT MATCH is a lesson in love…well written.”

“Well written; held my interest until the end.”

“Waiting for Byrum’s next story.”

“OMG! I just finished DILEMMA. It was so good!”

“Byrum could be the next Nicholas Sparks.”

“Enjoyed DILEMMA; didn’t want to put it down.”

“I really liked DILEMMA. Had trouble putting it down.”

“Looking forward to Byrum’s next book.”

“A racy read, but filled with redemption.”

“DILEMMA held my interest throughout the book.”

“Such an interesting read!”

“Didn’t get anything else done, while reading DILEMMA.”

“Enjoyed DILEMMA, and didn’t want it to end.”

“Can’t wait until Byrum’s next novel.”

To the memory of
Charles Lyndon Byrum
, the most wonderful
brother and friend that I could ever have. He was the First Reader of my debut
novel,
Dilemma
.

A special thanks to
Paul W. F. Coughlin, MD, FACS
,
for giving me a tour of a hospital surgical suite, and for describing the
procedures from start to finish that lead to improved health for a surgical
patient. He fielded my many questions with the precision of the well-respected
surgeon he is. His medical experience spans 35-plus years, treating patients in
a number of leading hospitals, and in his practice with Piedmont Urological
Associates, High Point, NC. He is a Fellow, American College of Surgeons. In
addition he has served in consultative and advisory capacities within the
local, state, and national medical community.

A special thanks to
Kimberly Hedrick, RN
, for giving
me a thorough explanation of the many demands and expectations of nursing
personnel. Her overview of nursing training and standards, and the practical
applications within healthcare facilities reflected her expertise in patient
care. Ms. Hedrick is a practicing Registered Nurse in a major hospital in North
Carolina.

The above professional experts gave me the correct way
surgical and nursing procedures should take place. The information helped me
provide a fictional setting for
Perfect Match
. Another task, as the
author, was creating fictional characters that would violate some of those
professional standards, resulting in tension, and conflict, and providing
suspense for readers.

Any time human behavior bumps the boundaries of the
accepted, the norm, it usually generates tension, confusion, conflict,
suspense, and sometimes change. My characters in Perfect Match are in the
middle of conflict and suspense.

All characters in
Perfect Match
are strictly imaginary,
and not based upon anyone living or dead. Perfect Match is not an authoritative
medical text, nor is it intended.
Perfect Match
is a romance-suspense
novel for entertainment.

This eBook is
licensed for your personal enjoyment only. This eBook may not be re-sold or
given away to other people. If you would like to share this book with another
person, please purchase an additional copy for each recipient. If you’re
reading this book and did not purchase it, or it was not purchased for your use
only, then please return to Amazon.com and purchase your own copy. Thank you
for respecting the hard work of this author.

This is a work of
fiction. All the characters, organizations, locations, and events portrayed in
this novel are either products of the author’s imagination or are used
fictitiously.

The plush, king-size bed was disheveled from a wild night of
lovemaking.

But D.R. Fallington, thirty-eight year-old CEO of Fallington
Enterprises, had never thought of it as lovemaking, just good sex. He rolled to
his left and felt the warm pink breasts of Mindy Woods against his face. She
wiggled slightly before her deep breathing resumed.

D.R. would usually be ready for more sex at the slightest
movement of any female who happened to be in his bed. But in the quietness of
the moment he was thinking that he’d turn thirty-nine in another ten months.
Bothersome, but that didn’t alarm him nearly as much as the cold hard fact that
Mindy would turn twenty-four at the end of the week.

Now that was scary, a woman getting older. And he’d made a
promise with himself as a college fraternity man that he’d never date a woman
older than 23. Somehow D.R. had this notion that a woman was at her prime
between 21 and 23. Not a year older.

Mindy had been his sex buddy for about a year, but at times
her ditsy ways frayed his nerves, but she offered good sex. Couldn’t argue with
that arrangement, but lately she’d crowded him with her whining questions and
neediness. More good reasons to distance himself from her, and start looking
for another twenty-one year old, young and tender.

But on this lazy morning, maybe a little more sex and then
make the decision to ditch Mindy later. His arm slipped over her and his hand
pressed her firm ass against his manhood that was more awake than the rest of
him.

She stirred closer and mumbled in her thin treble voice,
“What color D.R.? Have you decided on the color yet?”

He thought, here we go again with her nagging questions
first thing in the morning. “Yeah, I’ve decided, pink is the color. Pink it
is.” His eyes feasted on her pink, full breasts.

She pushed away, facing opposite from him. “I’ve told you I
don’t like pink. I like bright lime green; that’s my favorite color. You know
that. I’ve told you that a thousand times already.” Her poutiness riding on
each word.

“Damn it, Mindy, I’m not getting a lime green Corvette next
time I trade. That’s a stupid color. I like silver. It’s got prestige, class.”

She jerked the covers around her and snapped, “Silver, gray,
whatever, is an old color,” then added, “old, just like you.”

Growing irritated, he said, “Well, that does it. Get your
clothes and get—”

D.R.’s smartphone blared with a ring tone that was assigned
to his brother, Rodney.

Sitting up, as he answered the call, “Why the hell you
calling me this early in the morning?”

He listened, as he ran his fingers through his thick black
hair. “Son of a…! I can’t believe she’d do this, but that’s just like her,
always full of surprises.”

He cocked his head, listening. “Don’t worry about the damn
status reports, tell “taco woman” to clean them up and have them ready. I’ll
head to the office shortly.” As he ended the call, he jerked the covers off
Mindy and motioned for her to get moving.

She scowled as she scurried for the bathroom, D.R. gazing
after her wiggling ass. He called out as she slammed the bathroom door, “Hurry
it up, we’ve got an emergency staff meeting this morning.”

He surveyed the large bedroom with sitting area, equipped
with soft chairs, ornate lamps, and low cocktail table. Posh pillows added
colorful accents. A fireplace was the room’s exclamation point. He eyed the
almost empty bottle of Jack Daniels. No wonder he had a headache that was
beginning to bang away, making last night’s tumble a dull memory.

He entered the separate bathroom, turning on the shower full
blast. He looked at himself in the wide mirror, admiring his physique, still
steamed at Mindy’s cutting remark about him being “old.” The nerve of that
little bitch, he thought. I kept her ass busy last night didn’t I?

Or did I? Doubt crept in. Maybe she was faking it. Oh, no.
No woman has ever faked D.R., or has she? Damn Mindy for making me have these
questions. I don’t need this kind of crap with an emergency staff meeting
breathing down on me this morning.

I have to get rid of her; no doubt about it. She’s too damn
old for me. He flexed his muscles, admiring his firm chest, six-pack abs, arms,
and shoulders. He still had good solid legs, perfect health on his last
physical a couple months ago. Nothing to worry about. I’m in perfect shape.
Ageless. He admired his handsome looks from head to toe. Full head of hair,
smooth tan skin, and virile looking male equipment. Yeah, especially that, he
thought.

He reached for his special shampoo that would keep the gray
strands out of his black hair, and stepped into the shower. A hot shower always
got rid of a few joint aches after a rousing night in the bed.

Madison Winston poured herself a second cup of coffee, and
breezed through the
Asheville Citizen-Times
. She loved reading about the
local scene, always feeling better after catching up on the latest news. She
also checked out her favorite online sites on her clunky computer, and then she
was ready to take on the day.

After being laid off during the economic downturn of
2008-2009, she was glad to have a job, but she detested her boss. But she
needed the job.

Being a single mom was challenging, but she loved her
daughter more than anything. She would do whatever job she had to in order to
remain independent.

Her clothing inventory was meager, but basic and
professional. She loved bright colored scarves and usually wore one with every
outfit for accent. Her almond-swept hazel eyes sparkled with her color
combinations. Full, rich, dark brown, over-the-shoulder hair, anchored her
attractiveness.

Asheville weather offered a variety of seasons. It was
mid-April, cool days remaining as spring teased the popular mountain area.
Today she opted to wear a black just-above-the-knee skirt with matching jacket,
and off-white blouse, accented with a soft turquoise scarf. Two-inch heels put
her height at five-ten and lean weight at 119.

The younger women in the company where she worked always
dressed for a sports bar. But at thirty-four, Madison didn’t mind being a professional
woman who stood out. A little touch of makeup here and there did wonders for
today’s modern woman. And of course her fitness workouts kept her in Olympic
shape.

She did wonder about her love life, or the lack thereof. She
wondered if she sent some kind of invisible signal to men that said “danger,
stay away.” Since moving to Asheville five years ago, the few dates she’d had
turned out to be duds, uninteresting. She yearned to meet that special man. But
her plate was full right now, trying to hold on to the job she had and care for
her daughter.

Madison glanced at the clock, finished up her power
breakfast of fruits, yogurt, and cereal. In her small, two-bedroom apartment
five miles from downtown, she went through her mental checklist of coffee pot off,
lights off, computer off, bed made, and headed out to her ten year-old faded
blue Cavalier. She always said a prayer before turning the key. As a backup
she’d been putting money aside each paycheck to trade for a better car,
hopefully in a few months.

She usually arrived at work a good thirty minutes before her
actual work day began. Do more than is expected of you, and unexpected good
things will happen to you. So far that saying from her dear mother hadn’t
produced much for her. Oh, well, it doesn’t hurt to try.

The Army Of Light (Kestrel Saga) by Fender, Stephen
The Phantom of Manhattan by Frederick Forsyth
My Foot's in the Stirrup . . . My Pony Won't Stand (Code of the West) by Bly, Stephen
Amy Inspired by Bethany Pierce
Tracing the Shadow by Sarah Ash
Fairy Tale Queens: Representations of Early Modern Queenship by Jo Eldridge Carney
The Renegade Merchant by Sarah Woodbury
Chosen by Lisa Mears
Legacy of the Demon by Diana Rowland
The Dragon Savior of Tone: World of Tone: Book 2 by A. D. Adams
Our partner