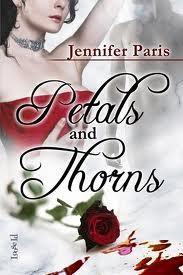 This e-book is a work of fiction. While reference might be made to actual historical events or existing locations, the names, characters, places and incidents are either the product of the author's imagination or are used fictitiously, and any resemblance to actual persons, living or dead, business establishments, events, or locales is entirely coincidental.

This e-book contains sexually explicit scenes and adult language and may be considered offensive to some readers. Loose Id LLC's e-books are for sale to adults ONLY, as defined by the laws of the country in which you made your purchase.

Please store your files wisely, where they cannot be accessed by under-aged readers.

The wedding ceremony took place deep in the woods.

The chapel looked innocent in its white prettiness, as if a normal wedding took place there instead of this monstrous farce.

At first Amarantha had wept. When her father had arrived home on the magnificent stallion, his arms overflowing with luscious red roses and saddlebags full of gold coins, and told the wild tale of the Beast who wanted Amarantha and only her, she'd been at first astonished, then enraged. She'd thought of running away, but her father and sisters had talked Amarantha around. The Beast had promised wealth to restore her father's fortunes and more. They assured her that the Beast wouldn't kill her.

“He saw your portrait and finds you beautiful,” her father crooned. “It will be a marriage in name only. You need not lie with him”—he snickered—“if the creature is even able to perform as a man. Likely he is too deformed and wants only a pretty wife to look upon.

“Remember”—the merchant took his youngest daughter's slender hands in his as they stepped down from the carriage—“if the marriage is not consummated within one week, then he has agreed to have it annulled and to settle upon you half of his fortune! All you must do is retain your chastity for one measly week, and any ninny can keep her legs closed that long. Remember it every day, and the week will fly by. Soon you'll be at home again with us, our fortunes forever secured.”

“He only has to take her by force,” Anastasia scoffed.

“No,” a deep voice rumbled behind them. They started like finches when a hawk flies over. No one had heard the Beast arrive.

He stood back, tall and broad shouldered as her father had said, watching from the depths of his cloak. The winter wind caught the black folds, whipping them tight against his massive body, but never stirred around his face. Amarantha couldn't make out his features, though she thought perhaps she caught the gleam of a white tooth. And was that the shadow of a muzzle?

She shuddered, looking away quickly.

“No, Amarantha,” the Beast said, “I will never take you by force. I will only take you when you ask me to. That one choice, at least, will always be yours.”

Amarantha stirred uneasily inside the confines of her corset. Something about his words seemed…unwholesome somehow.

Angelica laughed brightly and clapped her jeweled fingers together in a graceful flutter. “Then we are saved! For, Sir Beast, though we cannot see you clearly, we understand that you are so hideous that no woman would willingly have you. Perhaps your beastly exterior reflects a similarly feral and corrupt heart?” She waved a languid hand at Amarantha. “Else why resort to blackmail to obtain a bride?”

“Indeed”—the voice sank into a near growl—“sister of my bride. You are undoubtedly correct. But since blackmail has, in fact, won me a bride, I'm anxious to take possession of her. Shall we?”

Amarantha gasped and stepped back when the Beast moved toward her, dark and sinuous. But he only offered her his arm to escort her into the chapel. She took a deep breath, as deep as her tight corset allowed.

After the short ceremony, Amarantha kissed her father and sisters good-bye.

She couldn't seem to hear what they were saying to her, only that she had promised to obey this man. This monster.

“Do you take this man, Sir Beast… Do you promise to love, honor, and obey?”

the chaplain had asked.

The word seemed to reverberate in her skull.
Obey
. Chased by the image of how his eyes had glowed at her sparking amber from the depths of his hood. Love

and honor seemed to pale before the other word. Amarantha possessed enough cleverness to avoid shaming him, and she could pretend to love him. Obedience might not be so simple. She almost felt his sigh of satisfaction at her promise, as if something that had pained him suddenly eased.

Amarantha wished she could feel the same.

In his carriage, they rode facing each other, though Amarantha gazed steadfastly out the window as the forest deepened and thickened. The trees grew more gnarled, the roots thrusting up from the soil only to twist away again, diving into the moist ferns covering the soil. Still, it was easier to keep her eyes on the strange landscape than look at her husband's shrouded form and wonder what horrors it might contain.

Amarantha glanced at his black silhouette. Looked away again.

“It occurs to me it might be easier to see you and”—
get it over with
—“learn to become accustomed to you.”

“Consider that I might be so frightening to you that you would be unable to bear coming near me again.”

“No”—the Beast chuckled darkly—“these things are best done in stages. I intend to win you over, lovely Amarantha.”

“I don't see how that's possible.”

“Because you are innocent,” the Beast said, his voice nearly a growl. “And you have not discovered how I can make you feel.”

“I have. You make me feel fear. And revulsion.” She looked out the window.

“None of those are real, Amarantha.”

She forced herself to look at him. “I must tell you, I don't see how I can ever be your wife in truth. I cannot imagine asking you to—”

“To take your maidenhead? To rend you with my cock so that you scream in agonized pleasure?”

The shock drained Amarantha's cheeks of color. Even as the image somehow stirred her.

“Sir Beast, you cannot say such things to me.”

“It seems, my bride, that we must stretch your imagination as well. The only thing I may not do is take you by force. Everything else is open to me.” He settled back in a very masculine satisfaction. “If you intend to keep the bargain that saved your father's life, that is.”

Amarantha bit her lip. Her father had wept even as he handed her into the Beast's carriage. Had he realized? Her virginity wouldn't matter at the end of the week if she was dead.

“Amarantha.” The Beast leaned forward. She shrank back, but he only laid a gloved hand over hers. “I swear I will not injure you. Your beauty is precious to me.

I would not see it marred in any way.”

She restlessly moved her hands out from under the black leather of his glove.

A mistake, since his hand fell to her knee instead, a heavy weight through the thin cloth.

“I will wish to see it, however,” the Beast said, gravel in his voice.

“You, in your naked glory. When we reach the house. In exchange, I will not touch you just yet.” He leaned back again. “I mention it now so that you might mull the idea over.”

Amarantha drew in a breath. “I do not think I shall become peaceful with the idea in that space of time.”

“You mistake me, my bride. Peaceful is not how I want you.”

If he'd intended her to think about it, to imagine herself naked and vulnerable in front of his black-cloaked figure, then he succeeded.

For the remainder of the drive, she couldn't erase the idea from her mind.

Amarantha tried to think of other things, but every image led her back to that one.

Worse, it seemed the Beast knew. She could feel his scrutiny, felt certain he noticed every twitch of her skin. She stared at her folded hands, restraining the urge to cover her breasts with them. As if he could already see all of her.

By the time they arrived at the manor, Amarantha felt feverish. The Beast held up a hand for her to alight and then offered his arm as he had at the chapel.

“Then we must proceed with the viewing that much sooner, so you may rest.”

Amarantha glanced longingly back at the carriage. Her boxes and trunks were stacked on top, undoubtedly transferred by her father's few remaining servants during the ceremony. Now, for the first time, she saw there was no driver.

The Beast glanced over his shoulder. “You will become accustomed to it,” he said. “All the servants here are invisible. But, as your father discovered, you will want for nothing here. Whatever you wish for shall be given to you. Except”—his voice grew velvet smooth—“those few things I choose to deny you.”

“Why would you do that?” She whispered it.

“For my own pleasure, of course. Never forget that I am a beast, my dear.” The great wooden doors swung wide as they approached. Amarantha could see they were as thick as the length of her forearm. She shuddered when they boomed closed behind her. The Beast patted her hand, the black leather cool and slick against her skin. “Apropos of that, let us proceed directly to the atrium. It has the best light for me to see you.”

The Pot Thief Who Studied Pythagoras by J. Michael Orenduff
Cade: Fire And Ice: A Second Chance Hockey Romance by Hart, Alana, Lake, Jessica
Trust Me: Matty and Kayla, Book 1 of 3 (The McDaniels Brothers) by Bell, Christine
Heart Shaped Rock by Roppe, Laura
Barefoot in the Sun by Roxanne St. Claire
Molly Brown by B. A. Morton
Ruby Shadows by Evangeline Anderson
Because of You by Caine, Candy
Five Dead Canaries by Edward Marston
Andy Squared by Jennifer Lavoie
Our partner