Read Petrodor: A Trial of Blood and Steel, Book 2 Online

Petrodor: A Trial of Blood and Steel, Book 2 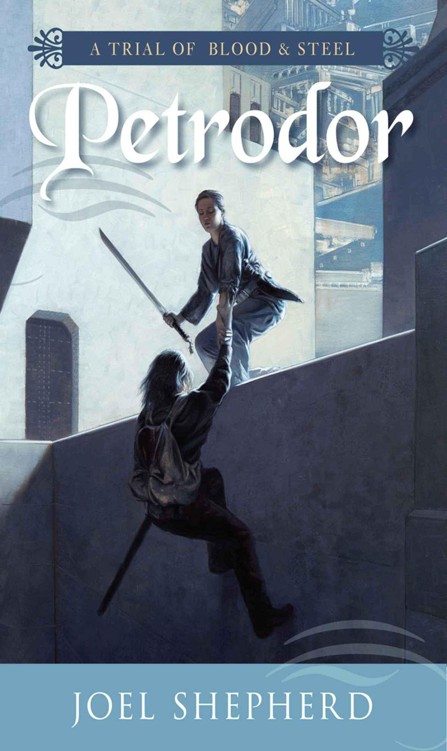 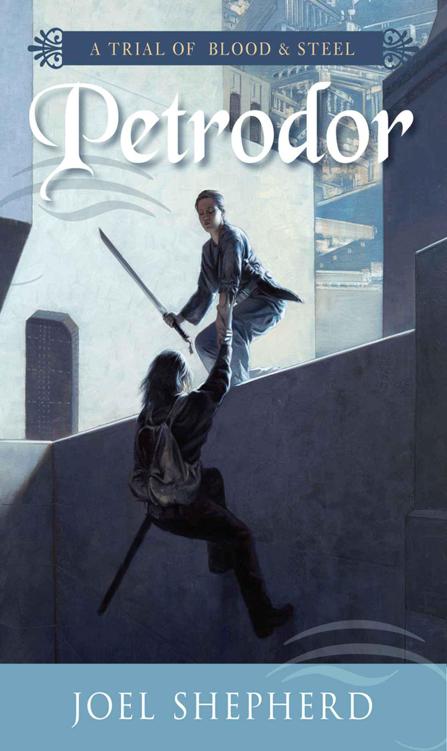 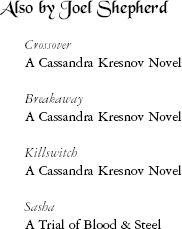 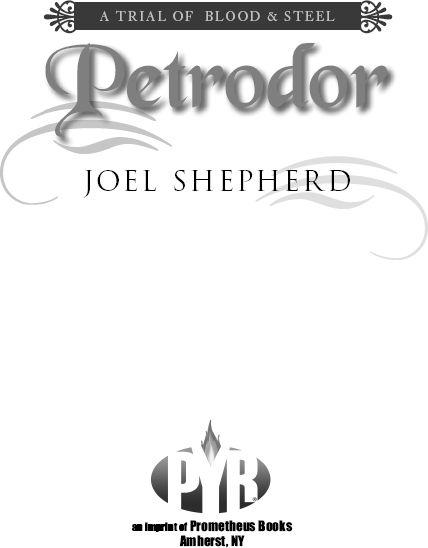 Published 2010 by Pyr
®
, an imprint of Prometheus Books

Petrodor: A Trial of Blood and Steel
. Copyright © 2010 by Joel Shepherd. Map copyright © Kinart. All rights reserved. No part of this publication may be reproduced, stored in a retrieval system, or transmitted in any form or by any means, digital, electronic, mechanical, photocopying, recording, or otherwise, or conveyed via the Internet or a Web site without prior written permission of the publisher, except in the case of brief quotations embodied in critical articles and reviews.

Printed in the United States on acid-free paper 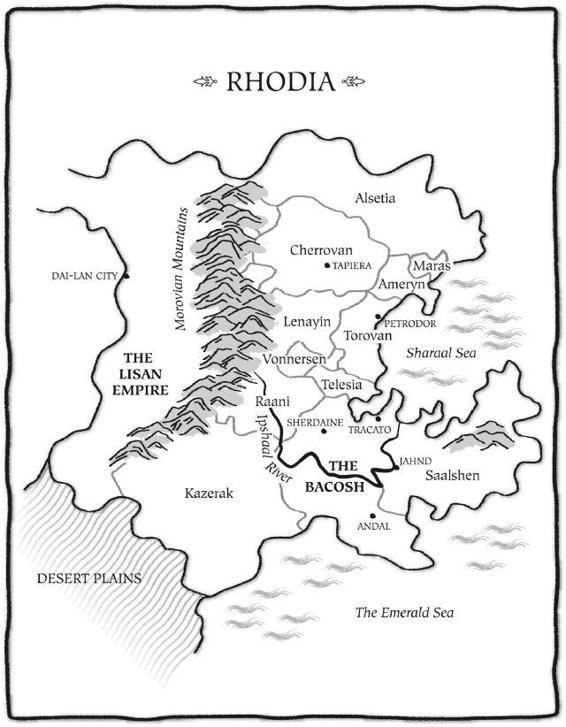 S
ASHA SAT ON THE PROW OF THE BOAT
, and saw a number of red and white floats bobbing on the surface ahead. She turned, shielding her eyes against the glare of the sun, and pointed. “That's them,” she announced to Mari, back at the tiller.

“Of course that's them,” Mari retorted. He was a broad, squat man with powerful arms and a rotund middle, weathered and browned in the sun. He squinted into the glare with no shielding hand, well used to that intensity. Sasha still did not understand how he could know where to find the floats. The sea was slippery calm, save for the rocking of a gentle swell. Off to the right, the hills of the Torovan shoreline loomed brown and green, a series of rocky bays and headlands, small waves lapping at the feet of rugged cliffs. Mari simply seemed to know where he was, out here on the featureless sea, the same way a Lenay woodsman might find his way about the forests and hills of Sasha's native Lenayin.

A gentle, shoreward breeze pushed at the sail, bringing the floats closer. Sasha counted twelve in this cluster. Far off to the right, she could see some more floats, these were green and brown though, not the red and white that belonged to House Velo.

“Sasha, look up,” said Errollyn from his post beside the sail. “White-headed albatross.”

Sasha squinted into the blue sky, and saw a wide-winged bird far overhead. Clearly an albatross, for its wings were long and thin, and barely flapped. But white-headed? Not only did serrin see better by night, they saw further by day as well.

She glanced at Errollyn—he leaned back on the side of the boat, head tilted to gaze enthralled at the sky. She'd never seen Errollyn more happy than in the last several weeks, coming out on the boat. The ocean was nearly as strange to him as it was to her, and he delighted at its wonders. He wore an old, work-stained shirt and rough pants, dark grey hair falling back in disarray. His arms were bare in the unseasonal warmth, flexed with the knotted muscle of a svaalverd warrior. Very few serrin were given to such casual
untidiness, yet Errollyn seemed infinitely more relaxed now than at formal occasions, or in social company. And Sasha realised that she ought to be staring at the albatross instead, and tore her gaze away…but not without a small, private smile.

“Forget the damn bird!” Mari exclaimed. “Boy, let out the sail! Valenti, get off your arse!”

Sasha moved back to help Mari's son Valenti, cautiously lest the small boat rock, grabbing the second float to come alongside as Valenti grabbed the first. They hauled wet rope, hand over hand, Valenti racing her with a grin, bare arms straining against the waterlogged weight…but it was Errollyn on the other side who beat them both, dragging a wicker cage from the sea with a rush of water. Sasha pulled her own clear at the same time as Valenti, and peered into the round, flat contraption to see if anything had climbed into the hole in the top.

She was lucky—there were two lobsters, flapping and kicking, and she pulled each out in turn, tossing them into the crate at Mari's feet which was already crawling with strange creatures. Valenti added another from his cage, and Sasha turned to watch as Errollyn prised an enormous crab through the hole, holding carefully to its huge pincers. It was red, with a white underbelly and blue trim on its legs.

“Excellent!” Mari exclaimed. “Another that size and Mariesa will have enough for her
crasada dosa
!” Tonight was Sadisi, the birthday of Sadis, a local prophet who had brought Verenthaneism to Petrodor more than seven hundred years ago. Tonight, there would be more seafood than she'd yet seen in nearly a month of living in Petrodor. Her stomach threatened to turn at the prospect. Maybe she could find a good juicy steak.

Errollyn peered curiously at the crab, as it jabbed its pointed feet at him and snapped helplessly with its pincers. Then he dropped it into the crate with the rest and turned to pull out a second, smaller crab. Sasha and Valenti grabbed bait from the bait box, reached in to spear it on the hooks within the cages, and dropped them overboard once more.

“Too small,” said Errollyn of the crab.

“Too small, and female,” Errollyn replied, peering at the markings. “Throw it back and you'll have many more crabs hatching in years ahead.”

Mari was unimpressed. “We need the meat, now throw it…” Errollyn did throw it—straight over the side. Mari rolled his eyes in exasperation. “Blasted serrin,” he muttered, stomping past the boxes, rocking the boat alarmingly. “It's a blasted crab. I want to eat it—you want to make love to it.”

He grabbed a pole from the gunnels and reached for the next float.
Errollyn caught Sasha's eye and grinned, a flash of piercing dark green eyes behind a long, unkempt fringe.

“Aren't there some serrin who won't eat any meat at all?” Sasha asked, making her way up to the bow to grab the next float. The boat's rocking had been a concern at first, but she was getting used to it now. And her balance, of course, was excellent.

“Yes,” said Errollyn, throwing his baited cage back in with a splash. “But they're stupid.”

“Why wouldn't they eat meat?” Valenti asked, making his way past Sasha. He put a hand on her waist in passing. It might have cost a Lenay man his arm, but Petrodor men were just like that, she was discovering. One learned to avoid unnecessary arguments, and make allowances. Sometimes.

“To avoid killing animals,” Errollyn replied, following Valenti up to the bow.

Valenti turned a frown on Errollyn. “But you love animals! Why do
you
eat them?”

“Why do you?” said Errollyn.

Valenti grinned. “You crazy? They taste good! I'm not going to feel sorry for some crab!”

“Then there you are,” said Errollyn with a smile.

“Crabs don't feel sorry for the small animals they eat,” said Sasha, unwinding arm lengths of dripping rope into the boat. It was hard work, for the cages dragged in the water, and her arms and shoulders ached. But she had strength there that few human women could match, and the sword calluses on her hands kept the rope from chafing. “Why should we feel sorry for crabs?”

“How do you know crabs don't feel sorry for what they eat?” Errollyn asked her. “Maybe they do. Maybe they say a little prayer and beg their gods for forgiveness.”

“That's what Rhillian always tells me,” Errollyn said with a grin, hauling his own rope in. He was faster than any of his shipmates—not only powerful, but certain with his hands, and poised with his balance. He made it look effortless.

“Then explain yourself,
ma'she das serrinim
,” Sasha teased, invoking a Saalsi term for serrin debates. “How does your truth flow?”

Golem in My Glovebox by R. L. Naquin
The Death of WCW by R.D. Reynolds, Bryan Alvarez
Prom Dates from Hell by Rosemary Clement-Moore
The Socialite and the Bodyguard by Dana Marton
The Auric Insignia by Perry Horste
Jockeying for You by Stacy Hoff
Enigma by Michael P. Kube-McDowell
Legacy of Blood by Michael Ford
Music for My Soul by Lauren Linwood
Everything I Need to Know Before I'm Five by Valorie Fisher
Our partner