Read Phantom of the Wind Online 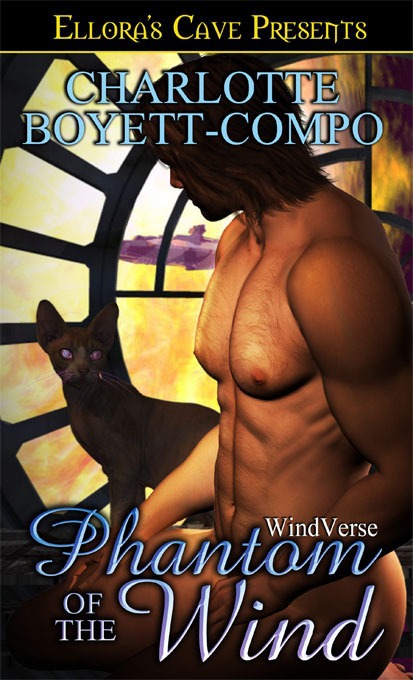 The following material contains graphic sexual content meant for mature readers.
This story
has been rated S-ensuous
by a minimum of three independent reviewers.

S-
e
nsuous
love scenes are explicit and leave nothing to the imagination.

E-
rotic
love scenes are explicit, leave nothing to the imagination, and are high in volume per the overall word count. In addition, some E-rated titles might contain fantasy material that some readers find objectionable, such as bondage, submission, same sex encounters, forced seductions, and so forth. E-rated
titles are the most graphic titles we carry; it is common, for instance, for an author to use words such as “fucking”, “cock”, “pussy”, and such within their work of literature.

X-
treme
titles differ from E-rated titles only in plot premise and storyline
execution. Unlike E-rated titles, stories designated with the letter X tend to contain controversial subject matter not for the faint of heart.

Ryden Bakari, the Emperor of the Aduaidh Alliance—also known as the Burgon—was a newly commissioned ensign the year war had broken out between the Aduaidh and the Coalition of Federated Worlds. The dispute had begun at the borderland of small planetoids between the Aduaidh Quadrant and Amhantar, that green world from which had come greedy warriors intent on grabbing Aduaidh land at all costs. The hostilities had begun with a violent skirmish or two then had escalated rapidly to all-out warfare, bringing other worlds into the fray. No sane voices arguing for a settlement could be heard for the conflict had become a brutal contest for supremacy waged by both sides. The Burgon before Ryden had been a savage man intent on winning no matter how many casualties or how vast the destruction of lands it would take a hundred years or more to bring back to use. By the time Ryden took the throne, hundreds of thousands of men, women and children had died on both sides of the war. Thousands of acres of land would never be fertile again and plant and animal life had long since disappeared from those war-ravaged regions.

Tired in spirit and weary of body, Ryden had long since given up all hope of there being a decisive victory on either side of the coin. He had lost ten of his brothers and three times that many sisters. Numerous friends and even more numerous acquaintances had lost their lives to a war that had ceased to have meaning for those planetoids that had been the cause of the war had been destroyed—blasted into so much space dust—long ago. The reason for the war was no more, yet the hostilities continued for thirty long, terrible years.

Until the Burgon took it upon himself to sue for peace between the Alliance and the Coalition.

There was only one place in the entire megaverse that would be suitable for the warring factions to meet. It was there where only three humanoid life forms are allowed access to that region at any one given time, where non-humanoid forms such as cybots and the like are expressly forbidden, to which no weapons of any kind may be taken, that the Burgon and two representatives of the Coalition met to discuss an end to the hostilities.

The Plaines of Geschäft ranged in a vast semicircle along a cold desert north of the capitol city of Führen on Aduaidh Prime. There was no vegetation amidst the bright rose sands of the barren land for it never warmed enough for plants to grow. Star dunes lined the plain—indicating the fierce winds that created them had blown from many directions across the sand seas. As devoid of water as it was plant life, no animal made its habitat in the shifting, desolate land—the only break in the bleak vastness were large boulder-size meteorites scattered about the landscape.

Three Fiach runabouts landed that day on the ice field of the Plaines of Geschäft. The first ship to land was the
Sekkeen
belonging to Ryden Bakari. The next to land was the
Saoirse
, a sleek black ship personally designed by its captain Prince Cair Ghrian of Amhantar. The last ship to land—the
Turas
—belonged to King Ruan Cosaint of Gaelach. As ice crystals swirled around the warriors they made for Goath Pluais the Wind Cave where they would try to put an end to the killing and destruction that had been theirs for as long as each had drawn breath.

Over a roaring campfire, the men hashed out the details of a formal agreement whereby those who were of a like mind to end the war could live peacefully, their children and their children’s children never having to know the atrocities those gathered there that day on the Plaines of Geschäft had endured since birth. When the warriors left that barren ice plain they took with them the fledgling hope that the war between the Alliance and the Coalition of Federated Worlds would be put to an end.

Two months later on the neutral world of
an tSualainn
where all the leaders involved in the peace process met at the United Court of Justice, the Burgon Ryden Bakari of Aduaidh Prime, King Ruan of Gaelach, and Prince Cair of Amhantar as well as Prince Gabriel Leveche of Stori put their hands and seals to an agreement to end the Border Wars. These men not only formed a strong confederation of their own but began friendships that would last them a lifetime.

But there were those among the Coalition of Federated Worlds who did not want peace. They did not want there to be an end to a war that had brought them power and prosperity. It was not to their advantage that men such as the Burgon and King Ruan become allies.

Knowing there were those who would work diligently against peace even though they had pledged themselves to it, the Burgon and those who felt as he could do but one thing—find a way to bring down those men who would continue the war and the losses of life. To accomplish that end, they involved a man named Rory Quinn in their plans…

Kendall Bryne thought she had cried her last tear over Rory Quinn. Two years before, the swashbuckling thief had broken her heart into a thousand pieces and left her to a misery it took months to get under control. Just when she thought she had it beat, just when she thought she could pick up the pieces of her shattered dreams, tuck them away and move on, the Riezell Guardians announced they had arrested Quinn. The buccaneer who had been evading them for years had finally made a serious mistake and they were bringing him back to face the justice he’d thumbed his nose at for so long.

Sitting in the lounge of the Medivac Transport the
Sláinte
, staring out at the passing stars, Kendall lifted her cup of Jabolian coffee only to realize her hand was shaking. She put the cup down, put her hands in her lap, twisted her fingers together and felt hot moistness prickling at her eyes at her show of weakness.

“Damn you, Quinn,” she whispered. “Why did you have to go get caught?”

She knew what fate the Riezell Conclave would send down for Rory. He had eluded them far too long, shown his disdain for their laws too openly and gotten away with too much. They would need to make an example of him. His sentence would be harsh and carried out on Vid-Screens throughout the megaverse.

“You look like someone just pulverized that mangy cat of yours,” Lieutenant Karl Walker commented from across the room. “What ails you, Doc?”

Kendall looked around at the navigator. “Munchkin doesn’t have the mange,” she replied listlessly. She put her hands on the table, fingers still entwined.

“Could have fooled me,” Karl said as he came over to her table and took a seat. “What’s with her fur, anyway?”

“She’s an Elfinish,” Kendall said. “Their fur grows that way.”

“In clumps? And what’s up with her ears?” the navigation officer said with a pretend shudder. “I have nightmares about that cat’s ears.”

“Damned cat has ears like a fox I once had chase me on Durac.”

Kendall stared at him for a moment then realized what he was trying to do. She smiled faintly. “I bet it wasn’t a fox but a Duracian hooker running after you to get her money.”

“Well, now that you mention it that might have been the case. Damned whore had ears like a fox as I recall.” He winked at her then reached over to lay his hand over hers. “Did you get any sleep at all last night?”

Karl was a good friend. She’d known him since Fleet Academy and he’d unselfishly spent many hours listening to her problems—so much so he’d nicknamed himself Father Karl. He understood and had tried to help her get over the breakup with Rory Quinn.

“I didn’t get any sleep,” she confessed, and at his admonishing look she shrugged. “You know what they’ll do to him, Karl.”

He squeezed her hand. “I know he brought it all on himself,” the navigational officer pointed out. “He had a chance to go legit and he threw it back in Fleet Command’s face. He’s got no one but himself to blame for his predicament and you can’t let his stupidity destroy you, Kenni.”

Captain Liam Breen came into the lounge—his gaze going directly to Kendall—then he started toward her.

“I don’t like the look on the captain’s face,” Karl said, easing his hand from Kendall’s.

Breen nodded at Karl when he reached the table then turned his attention to Kendall. “We just got a message from the
Borstal
. They are in need of a medic and are bringing one of their prisoners to us.”

She knew before she asked. “It’s Quinn?”

The captain nodded. “They’ll rendezvous with us in about half an hour.” He gave her an apologetic look. “I’m sorry, Doc. This is the last thing I would ever have wanted to happen.”

Kendall looked away, down at her clutched hands. “Did they say how badly he was hurt?”

Karl exchanged a look with the captain. “He could just have appendicitis.”

“He doesn’t have an appendix. None of his kind does,” Kendall said, tears forming in her eyes again. “They probably beat the hell out of him.” She reached up to swipe angrily at her sign of weakness.

She gave him a faint smile and started to stand. Like the gentleman he was, Breen pulled her chair out for her. Before she turned to go, he laid a hand on her shoulder.