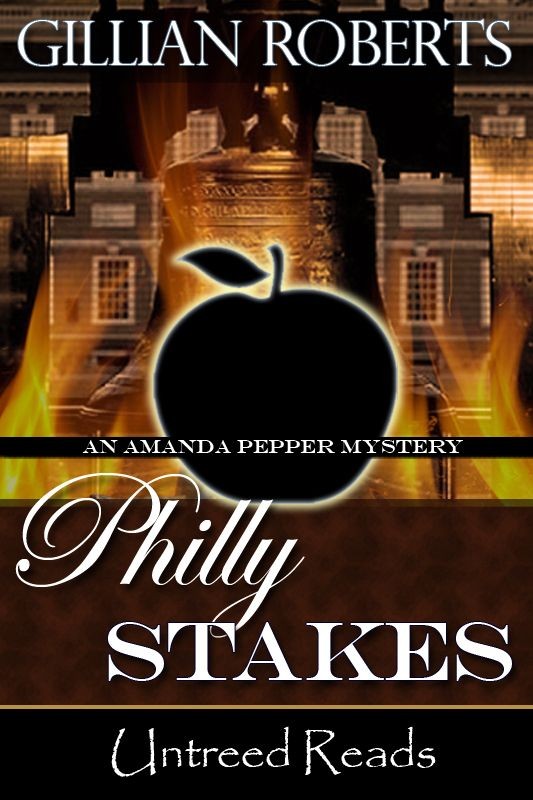 “Amanda Pepper wittily deflates the pretensions of Main Line denizens as she solves the Christmas killing of a none-too-benevolent Santa Claus.”

“Amanda’s savagely self-deprecating wit is a delight, as are her ongoing struggles with the minutiae of daily life.”

“An amiably entertaining story…written with a light touch and much gusto.”

who convinced me to make either backup

disks or hard copy of this manuscript

the day before my computer

blew out its brains.

It would take a book…

Philly Stakes
is Amanda Pepper’s second stint as an accidental sleuth, and I hope you enjoy reading it as much as I enjoyed my return visit with her.

When I wrote this book, more than two decades ago, I decided to keep the series in an unspecific “now,” but I failed to anticipate how quickly “now” becomes “then” and perhaps even “when on earth was that?”

As the series progressed, that vague “now” stretched over twenty years of real time, while spanning only two years in the lives of Amanda and C. K. Mackenzie. Too much changed in the real world for me to unobtrusively edit this electronic version (something not dreamed of when this was written) into our current “now.”

So you’ll undoubtedly notice that Amanda feels she can’t leave home and miss an important phone call, and that her newly acquired answering machine is mysterious to her, and even more so to her mother.

Philadelphia’s Wanamaker’s Department Store—established in 1876—was named because it seemed as solid as the one-ton bronze eagle in its center or the Liberty Bell, but it’s now history.

This was written during the dark time when the AIDS epidemic was horrifically new, hence her mother’s mailings about “safe sex,” and during the innocent time when air travel was so casual you could hand a friend the ticket you weren’t going to use.

Much has changed, but what hasn’t is human nature. People are still mysterious bundles of problems, passions, fears, joys, and, alas, murderous impulses from time to time, so no matter when “now” is—enjoy
Philly Stakes
.

I BLAMED THE WHOLE MESS ON CHARLES DlCKENS. WITHOUT HIS LITERARY contribution to the holiday spirit, the embarrassing, wretchedly wrong night wouldn’t have loomed, I wouldn’t have been rushed and angry, my students’ papers would have been marked and my pantyhose would still be intact.

So I blamed Dickens. Or at least Tiny Tim.

All I’d meant to do was teach the tenth grade a lesson. If not in English, then in humanity.

It began innocently during that arid stretch between Thanksgiving and Christmas. Let the song insist it’s a long, long time from May to September, but trust me, prevacation December, all by itself, is longer as measured by a schoolroom clock. Particularly at Philly Prep, where the IWUP— “Isn’t-Working-Up-to-Potential”—kid comes to roost. Unfortunately, ability to pay the tuition is our most stringent entry requirement.

Even before Thanksgiving leftovers are eaten, students go on mental strike. “A paper?” they moan. “A test? Reading? A report? Thinking?” They roll their eyes, they clutch their hearts. “How can you do that?” they ask. “It’s nearly Christmas!”

You become hard in this line of work. Or at least crafty. You offer the children A Christmas Carol. It is short and seasonally appropriate.

I honestly thought it would pass the time, be fun and, although I kept this aspect to myself, meet several academic goals.

“How about rewriting it, making it a radio play?” I’d chirped. “You’d perform it over the intercom, and…” my voice and enthusiasm skidded off their frozen expressions. The young scholars had never heard of Scrooge. Or plays. Or radio. Or reading. In fact, I wasn’t sure they’d ever noticed me before. Passive resisters slumped onto the center of their backs. More assertive souls doubled over, stuck fingers down their throats and gagged. The only language in which they were eloquent was Body.

So I grabbed for straws, or at least for the one student who wasn’t retching. Laura Clausen was a moody, silent girl who revealed her intelligence and self only in her writing. On paper, she was gifted, bold, direct and startling. In the flesh, she attempted invisibility, a pale chameleon, blending into the wood of her chair or the dusty green of the chalkboard. I liked her—the real, buried her—and imagined that in her silent fashion, she returned the affection.

But not at the moment. Not visibly.

I pushed on. “We could write a—” Laura’s eyes were opaque and unreadable.

“A Christmas Carol! Tiny Tim! Could you puke?” Marigold Rainbow Margolis was the end result of a decision to make love, not war. Frankly, a small, limited conflict might have been the better choice. Certainly it would have been more aesthetically pleasing. The flower children’s child had a half-shaved head full of graffiti. The hirsute half bristled with fronds of emerald hair. She looked like a Boston fern, complete with root ball.

A falsetto “Tiptoe Through the Tulips” trilled from somewhere.

“—make it contemporary.” I refused to surrender. I was John Wayne rushing through the line of fire carrying Tiny Tim to safety. I pumped energy and enthusiasm into my sales pitch. “Instead of Bob Cratchit and Scrooge, we could—”

The enemy had me surrounded.

Marigold stood. Twenty desks creaked as their tenants revved up for Tiny Tim—both singer and gimp-impersonations. This horrifying prospect necessitated The Return of the Nightmare Teacher. I had been sitting on the edge of my desk, but now I stood, crossed my arms over my chest and stared lethally. I aged decades. Orthopedic shoes fused to my feet. My hair turned gray and pulled back into a bun. “Calm down,” I said in a voice that did not admit we were of the same species.

They calmed. They generally do. Which is a relief, since I can’t maintain the pursed and squinty pose very long without giggling.

I shifted gears. “Forget Tiny Tim. Think about Dickens’ compassion and humanity. Think about today, about the less fortunate, the homeless.”

Their spinal cords completely disintegrated. Jellyfish, barely present. They rolled their eyes. “The homeless suck.” The boy who muttered this had a deep tan from Thanksgiving in Jamaica.

Clemmy Tomkins looked up from his drawing. At most, I receive one-third of his attention. The rest goes to sketches of bosoms and ballistic missiles. Two months ago, I found one of Clemmy’s works tacked to my bulletin board. It was a remarkably comprehensive full-color portrait of a tall woman with long red-brown hair, a recognizable nose and eyes much greener than mine actually are. The blackboard behind her said, “Foxy English Teacher.” The body, centerfold material and exquisitely detailed, was extremely flattering and the most imaginative work Clemmy had ever done in my classroom. Still, I had problems dealing with the fact that, aside from a volume of Shakespeare in the woman’s hand and stiletto high heels on her feet, she was stark naked. We have since negotiated a truce. He keeps his artwork and speculations private, and I allow him to use English class as studio time. And sometimes, he actually pays attention. Talk of the homeless had stopped his drawing hand. “There’s this guy on Chestnut Street—you know him?” His right hand resumed its artwork. “Gives me the creeps. Talks to himself. Shouts. Sleeps in a box.”

“Ever find one of them picking through your trash? Gross!” Suze flashed Clemmy a smile full of braces and smugness. They bonded, two rebels joined against the untanned, unpicturesque poor.

“Don’t you feel anything for them?” I asked.

Indeed they did. They felt annoyance. Impatience. Disgust. Why don’t those people do something for themselves? they asked.

I was suddenly furious. As a teacher in a private school, I was always the poorest person in my classroom, and I was sick and tired of the contempt in which those who had to balance checkbooks or shop sales were held. I didn’t ask what they thought the homeless should do for themselves. I was afraid I’d hear that they should join a gym, get their hair done or find a nice condominium.

I glared at these people I sometimes referred to as “my kids.” I’d teach them. Maybe they wouldn’t find the Ghosts of Christmas Present boring if they had to meet them, do something for them. “Fine,” I snapped. “No more Christmas Carol. You already know all about being Scrooge. Let’s see if you can learn something new.”

Before the dismissal bell stopped reverberating, I was in the principal’s office, petitioning. In a school with no tenure, one wants the administration on one’s side. I was eager to help, not join, the homeless.

I presented my Dickens-inspired idea. My tenth graders would cook and serve a holiday meal at a soup kitchen. Maurice Havermeyer’s eyebrows rose in horror. I loftied up my pitch, improvising multisyllabic academese, heavy on “the inherent necessity for community” and “endemic socioeconomic isolation,” and by the time I invented “participatory empathic responses,” I had him so thoroughly confused that he stopped spluttering.

“Yesss,” he said in his lockjawed fashion. I wasn’t sure if his accent, that upper-crust Main Line malocclusion, was any more authentic than the imitation Phi Beta Kappa key he rubbed when he was nervous or the cryptic rosette he wore in his lapel. It didn’t matter. The “yes” was very real. He sounded as surprised by it as I was. He experimented with it again, pulling at the word until it was long enough to wrap around his stomach. “Yesssssssss.”

I was not only surprised, I was worried. This was too straightforward and too enthusiastic. Completely out of Havermeyer’s character. His little eyes glinted, increased their kilowatts. “The holiday season,” he said. It was hypnotic fun watching him talk, lips and chin rigid, like a ventriloquist in search of a dummy. “Giving of oneself. Participatory empathy. The very image. Yesssss.”

I could almost watch pictures form in his brain. A human-interest story in the Philadelphia Inquirer. A spot on the Six O’clock News. A feature in the Sunday magazine. Reprints on heavy stock, glossy fodder for prospects. Increased applications, higher endowments. Bliss.

He was mentally drooling.

He walked to the long window overlooking the park and stood with his back to me. Then he turned with the expression God probably had when delivering the Ten Commandments. “Amanda, I admire your thinking. You have come up with the perfect vehicle to increase parent participation.”

“And the one who immediately comes to mind, who would be a fine starting point, is Alexander Clausen. It is my impression that he needs no more than a judicious push to more fully identify with our aims and goals.”

Emily Hendrickson by The Scoundrels Bride
Cécile is Dead by Georges Simenon
Halligan To My Axe (The Heroes of The Dixie Wardens MC Book 2) by Lani Lynn Vale
Slingers by Wallace, Matt
Between Here and the Horizon by Callie Hart
The Mirror by Marlys Millhiser
Fabulous Five 018 - Teen Taxi by Betsy Haynes
Don't Tell by Eve Cassidy
Elemental by Steven Savile
Gates of Thread and Stone by Lori M. Lee
Our partner