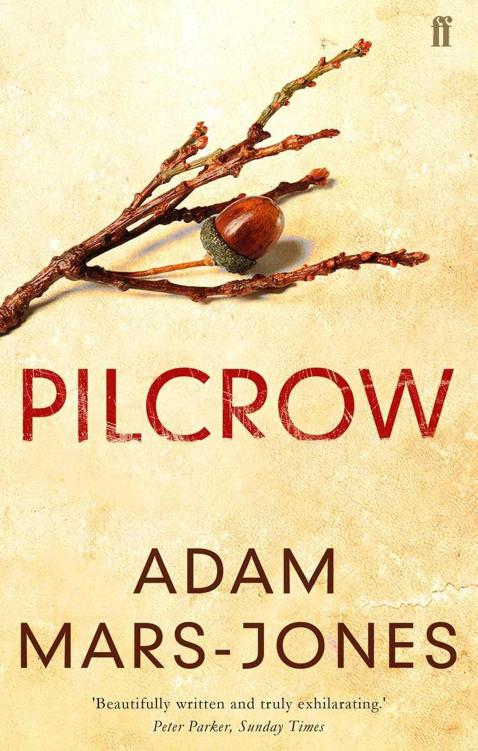 Dedicated to the Patient Ones
Holly, Keith  and Lisa

and in memory of

unglamorous defender
of my trade

1 The Taste of Dirt

I’m not sure that I can claim to have taken my place in the human alphabet, even as its honorary twenty-seventh letter. I’m more like a specialised piece of punctuation, a cedilla, umlaut or pilcrow, hard to track down on the keyboard of a computer or typewriter. Pilcrow is the prettiest of the bunch, assessed purely as a word. And at least it stands on its own. It doesn’t perch or dangle. Pilcrow it is.

The Taste of Dirt

The spring I learned to drive, the cherry tree in front of our house in Bourne End flowered as never before. It was 1968. Driving meant a lot to me as an idea. I felt that mastery of a car was a big step on the way to mastery of a life. I had my grandmother to thank for the car, a red Mini, licence plate OHM 962F, which cost £670 that year (new). I had Dad to thank for the gruelling lessons. I got started with the British School of Motoring, but Dad finished me off. He could be rather a remote figure, but I had nothing to complain about on that score while he was my driving instructor. He was relentless.

The Mini was the fun car of that decade – everybody liked it. Granny said, ‘People seem to be able to do everything these days,’ a vague sort of remark not at all characteristic of her. Generally Granny was vague as a razor, vague as a cruising shark. It turned out that she was confusing Issigonis, designer of the Mini, with Annigoni, who did Old Masterly portraits of the royal family. Granny was wrong only rarely. She didn’t enjoy it. She felt it didn’t suit her. It was always best for everyone to pretend it hadn’t happened.

I made a modest contribution to the car from my savings. That was the way things worked with Granny. It wasn’t her practice to buy things for people outright. I hadn’t yet grasped that Granny’s bounty always had a bit of spin on it – if she was helping one person, then she was almost certainly putting another one’s nose out of joint. I was
callowly
grateful, not understanding that Granny’s family interventions were like snooker shots, the ambitious kind where what you bounce off and how you scatter the cluster of balls – what you make
impossible
for the other players – is as important as the obvious aim of
racking
up points. All her charitable transactions tended to have that kind of ramifying quality. She wasn’t exactly rich, though she was rich compared to Mum and Dad, and she had the knack of getting value out of money even after she had given it away. It went on working for her somehow.

It took time for me to learn there were other attitudes to money. When I was about ten, and Mum and I were out shopping, a bus stopped for us. We hadn’t hailed it. We weren’t even at a stop. We were looking in a shop window. The driver got out smiling and asked Mum for my name and address. She hesitated and then gave it to him. Years and years later, it turned out that this same bus driver had died and left me £100 in his will. Mum and I were touched – it made up for the embarrassment of the original situation, with the passengers staring at us or grumbling about their interrupted journey. But Granny was unimpressed and even disapproving. Perhaps she resented competition, even of this unrepeatable kind, in matters of largesse. She seemed to be repelled by the idea of giving without strings attached, as if this was a missed opportunity for controlling events. Or perhaps she sincerely thought that generosity to someone you didn’t know could only be vulgar and sentimental.

Still, Granny must be thanked for her gift of the Mini, however many strings were attached, and however many different directions they pulled in. Every life needs an acknowledgement page – but this isn’t it. The beginning isn’t necessarily the best place for such a thing.

As a toddler, I had come up with my own pet name for my
maternal
grandmother. I was her first grandchild and I christened her. To me in my childhood she was Granny Annie. Anne was in fact her first name, something I couldn’t have known. Anne Mildred Hanway. In any other family the name would have stuck. But somehow Granny was covered with an invisible protective coating, like the anti-climb paint which deters vandals. No pet name could get a grip on that treated surface, no endearment would leave a mark.

With her cheque for the balance of the car’s price Granny included a note. Even her most casual communication was carefully thought out. I gave it due attention. Her hand-writing was crisply formed, her punctuation had the force of law. ‘Promise me, John,’ she wrote, ‘that you won’t pay too much attention to the road. Look around you; don’t waste the privilege of the view. People who keep their eyes on the road become bored, and boredom is the foremost cause of accidents.’ I wrote back to her with the promise that my driving life would be led according to her watch-word. I would not fall victim to boredom.

Dad wasn’t thrilled that his mother-in-law was subsidising my independence, but there wasn’t much he could do about it. Except that I’d only been able to afford four lessons with the British School of Motoring, so Dad supplied the rest. There may be an exception to the rule that you shouldn’t be taught to drive by a family member, but Dad wasn’t it. I drove the Mini tentatively and he drove me hard, though I tried not to show my distress. I didn’t want him to see my tears any more than he would have tolerated being shown them.

After a gruelling lesson Mum could see how near the end of my tether I was, and then she’d give Dad a good carpeting. She never learned the knack of standing up for herself, but she was all cudgels on my behalf. This was a peculiarity of her temperament. Then of course Dad would feel put out that his expertise was being so little appreciated.

During those lessons I was exposed to a rich sample of his personal slang, a largely war-time compound. ‘Gently Bentley,’ he would say when the gear-box gave me grief. ‘Don’t get
agitato
’ was for my moments of panic on the road, when obstacles threatened. ‘Don’t take
umbriago
, I’m only trying to pass on my skills’ played its part when the pain in my shoulder made me sullenly silent. ‘You’ll thank me when you pass first time,’ he said. He seemed very sure of that. For me Italian (or near-Italian) will always be the language of fancy ice cream and driving instruction that amounts to a form of torture.

As the lessons ground on, Dad got a little of his own back on Granny through me, in his rôle as a driving instructor. Acquiring the car might have been made easy for me, but he made sure that
learning
to drive it was no picnic.

Dad wouldn’t allow me to nose the car into the garage at the end of our sessions – I had to reverse it in properly, ‘according to Hoyle’. I cursed Hoyle, whoever Hoyle was. Heartily I hated Hoyle. There was a section of the Highway Code which Dad cited in justification,
prohibiting
the reversing from a minor thoroughfare into a major one. He gave away his forces background by this passion for regulations. Not many fathers would apply the rules so strictly, on a driveway which was technically a private road, with a son prone to weeping. It made the end of each lesson a bitter experience. Of course, if Dad had told me that one day I would be chased out of the house by a couple of maniacs, and that I’d gain valuable seconds if the car was pointing towards the garage door, I might have been convinced that the
elaborate
manœuvre was worth all the trouble, instead of ignoring it from the very moment I had passed my test. Though when the day came, and I had to make a get-away just as fast as I could, one of the two maniacs would turn out to be Dad.

We spent long afternoons doing three-point turns in the drive despite my aching arms. The cherry tree shed so copiously on the car, as I ground through my manœuvres, that I had to turn on the
windscreen
wipers. The meagre motor strained to clear the mash of
blossom
. I love the vegetable kingdom in all its provinces, every canton and palatinate. I have a particular tenderness for
Prunus avium
, but just this once I found myself thinking of the pink clods of petal on the windscreen as a sort of morbid discharge. Flowering pus, supremely ugly if only I had the knack of seeing it that way. It was a double cherry, scentless, cultivated for the blowsy show it made. Every year when the blossom got messy Dad would threaten to cut it down, but really only to get a rise out of Mum, who loved it and had a terrible suspicion it was vulgar.

I liked the cherry tree better earlier in the year, when tiny
caterpillars
let themselves down from its branches on the flimsiest threads.

Brain surgery without a knife

Granny had warned me against keeping my eyes on the road, and I did my best to oblige. Dad with his affinity for machines and vehicles had a different priority. He wanted me to develop a ‘feel’ for the car. This mystical union was beyond me. Gradually I acquired a
competence
, but my imagination wasn’t touched. A shrewder instructor, more attuned to my character, might have tried telling me that
driving
lessons are really exercises in neurological processing.

First you have to learn a set of routine actions with the apparatus of steering-wheel, gear lever and pedals, and then repeat them so often that they migrate from the right lobe to the mid-brain and become automatic. All you’re doing, inside your skull, is transferring material a couple of inches to the left, to a place where consciousness can safely leave it. That’s where the action is, inside your brain and not on the road. From that point on, driving is something you won’t need to be aware of until there’s an emergency on the road. Then actual thinking steps in again – usually too late. When a crisis looms, when the
windscreen
is full of onrushing wall, control reverts to the conscious mind, with its more highly developed capacity for making excuses.

The pilot and the autopilot only differ by a whisker, but how we insist on the distinction! We make quite a meal of that whisker. Consciousness is a useful technique and even an entertaining hobby, but a little goes a long way. It doesn’t do to make a fetish of it.

It would have comforted me to think of my driving lessons along those lines, as a sort of slow and rather wonderful brain surgery
performed
without anything as crude as a knife. Instead I experienced it as an ordeal which gave me a frozen shoulder, and aggravated the emotional weather inside the house, the frozen alliance between a husband and wife who weren’t really intimate enough to have rows on their own account. They needed stand-ins like me. And all along it was driving that was supposed to be the thing that got me out from under. I had to learn to drive if I was ever going to drive away, from Mum, from Dad, from the whole bang shoot.