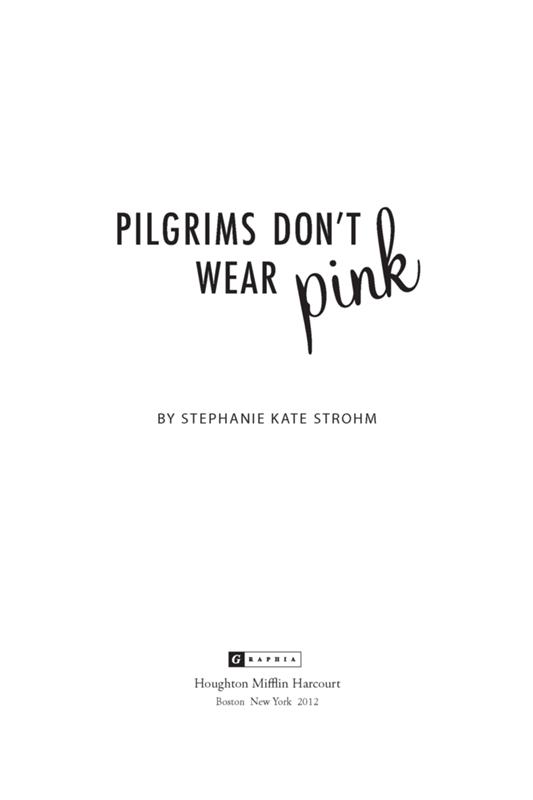 All rights reserved. Published in the United States by Graphia, an imprint of Houghton Mifflin Harcourt Publishing Company.

For Mom and Dad, who took me to every museum I wanted to visit, and for Ali, who endured them all

“Please remind me again
why
you're going to pilgrim camp.”

“Okay, first, it's not camp. It's a living history museum studies internship.” I nestled my cell phone between my ear and my shoulder, trying to zip my suitcase closed with one hand. Definitely not working. “And second, ugh,” I grunted. That zipper was like beyond stuck. “Like I've said about a million times, I'm not a pilgrim.” I sat on the suitcase and tried to zipper it between my legs. “I'm an eighteenth-century New England colonist on the coastline of the territory now known as the state of Maine. It's a totally different thing. It's like mistaking Pucci for Gucci.”

“That better have been static, Dev, and not a sigh of disgust,” I warned.

“Sorry, Libs,” he said, “but you know my brain shuts down when you go all History Channel on me.”

“Mmmrph.”
The zipper still wasn't going anywhere. Did this mean I had to take out a pair of shoes? I couldn't lose a pair of shoes! I'd already pared down my two shoe racks to like the bare minimum of shoes necessary for basic human survival. Literally, there was only one pair of heels in there.
One.

“It doesn't even make any sense,” Dev continued. “Living history? What is that? Isn't that an oxymoron? Isn't all history .Â .Â . dead? Because it's in the past?”

“Dev, how many times have I explained this?”

“I wasn't paying attention before.”

I sighed with frustration. “A living history museum is like a recreation of a village from a different time period, with all the museum workers dressed in costumes and doing chores or crafts or trades or whatever .Â .Â . Haven't you heard of Plimoth Plantation? Old Sturbridge Village? Colonial Williamsburg?”

“So sort of like Toontown in Disneyland, but not fun?”

“It sounds really boring. You just used the word
trades.
”

“No, it's fun, I promise! I mean, honestly, it kind of
is
like Disneyland,” I said, reconsidering. “It's not like I'll actually be
living
in the eighteenth century. I mean, there are flushing toilets and a gift shop. It just
looks
like the eighteenth century. A sanitized, tourist-friendly eighteenth century. I'll be like an eighteenth-century Disney princess! Colonial Cinderella!” Oh, I could see it now. I had the perfect shade of lip-gloss to pull off that all-natural no-makeup makeup look.

“Libby, Libby, Libbeeeeee, listen to meeee,” he whined. “We could have had so much fun together this summer! Not educational Disneyland fun. Real fun. In New York.
New York.
Not in Clamhole Harbor.”

“Whatever.” I could almost hear him shrug through the phone.

“Camden Harbor is really nice! It's so cuteâlike the cutest part of Maine ever. They filmed
Carousel
there, you know.”

“
Carousel
? The epic love story about mill workers and carnival barkers in a newly industrialized 1870s New England fishing village?” There's nothing I like better than when romance meets history. Nothing. “The Rodgers and Hammerstein musical?”

“Libby, not all the gays have an encyclopedic knowledge of the American musical theater. It's not like they hand you a DVD box set of the Rodgers and Hammerstein Collection in a Liza Minnelli souvenir tote bag when you come out.”

“Well, they should. I'd totally be gay for a Liza Minnelli tote bag.”

“I still don't understand why you didn't apply for the
Teen Mode
teen internship with me!”

Here we went again. We'd had this argument about a million times. Dev had entered an essay contest at
Teen Mode
and won a summer internship for high school students with his searing fashion exposÃ©, “St. Paul-y-ester: So Yesterday.”

“Um, Dev, I saw
The Devil Wears Prada.
There's no way I'd voluntarily subject myself to that. I'm not insane. And there's no way I would have gotten it even if I did apply! Not all of us benefit from the holy grail of diversity known as being perhaps the only gay Indian high-schooler in like all of Minnesota. How many straight blond girls do you think applied for that internship?”

“Libby,
The Devil Wears Prada
is
not
a documentary. How many times do we have to go over this?”

I squawked in protest. He ignored it.

“And you totally could have gotten the internship. You are almost as stylish as me, and that is not something I say lightly.”

It was, in fact, this sense of style that had brought us together. As Dev had said the day we'd met almost three years ago in freshman English at St. Paul Academy, we were “an island of pastel in a sea of gray.” Apparently, neither of us had gotten the memo that every other student at SPA would be clad in a gray North Face fleece. Who knew that private schools were where fabulous went to die?
Gossip Girl
it was not.

“Plus,” he added thoughtfully, “
Teen Mode
probably needs some non-size-zero diversity! You could be their token size six.”

“Imagine it, Libby,” he whispered seductively. “Right now, we could be running around the big city in Lanvin loafers and Prada pumps!”

“That is tempting, Dev,” I agreed, “but it's your dream, not mine. Think about it. What does anyone who loves history secretly want? A time machine. That's all I've ever wanted, really. And since that's not possible, this is as close as I'll get. A real living history museum. Yes, Prada is nice, but I'll be spending the summer in full period costume, churning butter in a corset.”

Technically, the term
corset
was more commonplace in the nineteenth century, but being perfectly accurate and saying “stays” might send Dev into history overload.

“And this is appealing?” he asked skeptically.

“God, you're such a big nerd, sometimes I forget why I'm friends with you.”

“Because no one else loves you enough to bake you butterscotch blondies as a
Project Runway
marathon snack.” I shifted the cell phone to my other shoulder.

“Your knowledge of fashion history is truly appalling. The first patented hoop skirt didn't show up in the United States until 1846.”

“Somehow I have a feeling
Teen Mode
doesn't care if I don't know what a bum roll is.”

“Probably right,” I agreed. Even though he'd only proved my point further, because bum rolls had gone out of fashion with Queen Elizabeth. The first one.

“What if I need you?” he demanded. “Do I have to send a carrier pigeon?”

“No, of course not.” I tutted. “It's not a forced labor camp. I'll have my cell phone the whole time. I promise. It's not like anyone actually
thinks
it's the eighteenth century. They're historians, not Amish.”

“Please, Libby,” he begged, “don't leave me! There's no way I can make it through the summer without you.”

“Oh, please, Dev. You made it through the first thirteen years of your life without me before I switched from public school to SPA. I think you'll be fine for three months. And you'll be in New York! Not home in St. Paul, but in glamorous New York! You'll come back with all these great stories and amazing clothes, and be all set to have the fiercest senior year
ever.
There'll be so much fabulous, you won't know what to do with yourself. Come on, you're gonna replace me with Anne Hathaway in like five minutes.”

“Again, Libby,
The Devil Wears Prada
ânot a documentary. Anne Hathaway does not, in fact, work at
Mode.
Or
Teen Mode,
which is where I'll be.”

“You know what I meant.”

“And if I'm replacing you with anyone,” he interrupted, “it's that Hottie McSexypants Gucci Pour Homme model.”

“You have my total permission to do that. Urgh!” There! I'd finally gotten my suitcase closed.

“Um, what was that?” Dev asked nervously.

“That weird grunting noise. What are you doing over there?”

“Oh, I was having some trouble zipping my suitcase, but I did it.”

“Hmm, let me guess. Wardrobe not quite fitting into that charming pink luggage set?”

“See?” he crowed triumphantly. “There's no way you can do this, Libby! You just can't! Pilgrims don't wear pink!”

“I don't wear that much pink!” I yelled into the phone. “And I'm not a pilgrim!”

“This is my closet?”

“No, this is
our
closet. This is your closet half.”

Whatever it was, it was tragic. Not-
my
-closet was a rickety IKEA construction that had been sloppily partitioned in half. The empty half was tiny, and the other equally tiny half held a pair of cargo shorts, two T-shirts, and a polo shirt, which I gathered belonged to the girl currently eyeing my pink luggage with an air of disdain.

“That's a big suitcase. What did you bring?” She folded her arms across her frolicking otter T-shirt.

“Um, clothes and shoes and .Â .Â . stuff,” I finished lamely, unzipping my suitcase. It exploded, shooting three sundresses and a polka dot bikini across the room.

“I'm Libby,” I introduced myself, retrieving the bikini from the pastel quilt it had landed on across the room. Somehow they had managed to fit three beds in this tiny room. And the “closet,” of course.

“Ashling,” she responded, still standing in the middle of the room, watching me unpack.

“What a pretty name,” I said, trying to be friendly, although I privately thought it sounded like the name of a gremlin. She already hated me, and all I'd done was accidentally turn my suitcase into a bikini launcher. Ashling turned and silently sat on her olive green bedspread, watching. No, “watching” was too benignâthis was a full-on malevolent glare. I kept unpacking, stuffing as many hangers as possible into my tiny sliver of closet. The whole thing was beyond awkward. It felt like some sort of weird performance art piece:
Girl Unpacking, Series One.
Or a psychological experiment:
The Effects of Observation on Process of Unpacking. Case Study: Female, Age 17.
But the watching eyes making me the most uncomfortable weren't, in fact, Ashling's.