Pirate Hunters: Treasure, Obsession, and the Search for a Legendary Pirate Ship 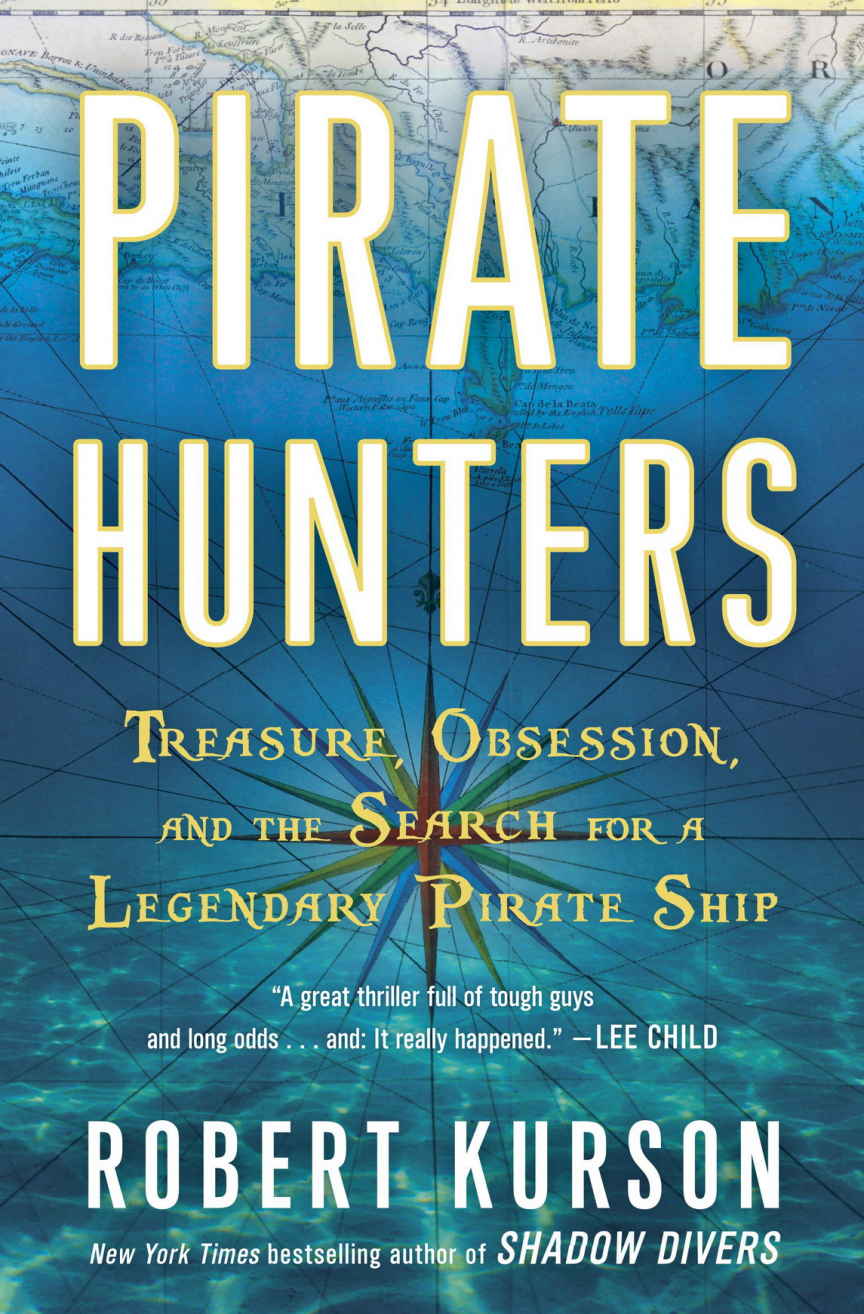 Published in the United States by Random House, an imprint and division of Penguin Random House LLC, New York.

Grateful acknowledgment is made to Paul Cox for permission to reprint the map of Port Royal (
this page
) by Oliver Cox, drawn subsequently as part of the report proposal “Upgrading and Renewing the Historic City of Port Royal, Jamaica,” June 1984. Reprinted by permission.

Chapter One: The Greatest Pirate Story Ever

Chapter Three: None of this Makes Sense

Chapter Eight: A Place Equal to the Man

Chapter Thirteen: I Hope We Can Stay Friends

Now and then we had a hope that if

we lived and were good,

God would permit us to be pirates.

Pirates could happen to anyone.

E
arly one January morning in 2012, I received an international call from an unknown number. It was coming from the Dominican Republic, but I didn’t know anyone in that country, I had never been there in my life. The voice on the line, however, was unmistakable.

“If you like pirates, meet me in New Jersey.”

The caller was John Chatterton, one of the heroes of my book
Shadow Divers
, a true story about two weekend scuba divers who discover a World War II German U-boat sunk off the coast of New Jersey, and their obsessive and deadly quest to identify the wreck. I hadn’t spoken to Chatterton in more than a year, but knew his New York–tinged baritone right away.

“What kind of pirates?” I asked.

Just the mention of pirates sat me straight up in my seat. But the timing for a trip from Chicago to New Jersey could not have been worse. It was snowing. I was researching a new book. And I was just winding down from the holidays. But I’d learned something from Chatterton the first time around—if there’s a window to go, you go. An hour later, I was on I-94 headed east.

Late that night, I pulled into Scotty’s Steakhouse in Springfield, New Jersey. I hadn’t seen Chatterton for three years, but he looked younger than I remembered. He was sixty now, but appeared in better shape than men half his age. He introduced me to his friend John Mattera, a man of about fifty with a broad smile and a Staten Island accent. I’d met Mattera years earlier, and remembered he’d worked as an executive bodyguard. His arms still looked the part.

We ordered drinks and caught up on family, then Chatterton got down to business.

“How much do you know about the Golden Age of Piracy?” he asked.

As it turned out, I knew quite a bit. Years earlier, at a used bookstore, I’d picked up a tiny paperback called
The Buccaneers of America
by Alexandre Exquemelin, a true account of pirate life by a man who’d sailed aboard real pirate ships and had chronicled the exploits of Captain Henry Morgan. The book, considered a classic, couldn’t have been more than two hundred pages. I had paid two dollars and taken it to lunch with me down the street.

I never got to the food.

Exquemelin’s pirates were wilder than in any movie, more treacherous than in any novel. They conquered entire cities, devised ingenious methods for plundering, and struck terror into the hearts of their enemies, sometimes without raising a sword. By a single act alone—perhaps by eating the still-beating heart of a merchant captain who refused to surrender—they broadcast their reputations across oceans. Even their downtime was epic, so packed with debauchery and fast living it would have spun the heads of modern millionaire rock stars. And yet, these pirates lived by a code of conduct and honor so far ahead of its time it made them nearly invincible.

They also left no trail. Only one pirate ship had ever been discovered and positively identified in the centuries since the buccaneers prowled the oceans: the
Whydah
, found in waters off Cape Cod in 1984. Nothing was harder to find underwater—or maybe in all the world—than a pirate ship. It was as if every trace of the buccaneers had disappeared.

I read every pirate book I could find after devouring Exquemelin, asked at rare coin shops to see silver pieces of eight, and even drove cross-country to explore a museum exhibit on the
Whydah.
So I knew about the Golden Age, which lasted from about 1650 to 1720.

“Good,” Mattera said. “Because we just spent a year living in the seventeenth century.”

For the next three hours, the men told me of their quest to find a great pirate ship—a journey filled with danger, diving, and mystery. They talked about researching the history of pirates in libraries and archives around the globe. They described using cutting-edge technology and tracking down ancient maps and manuscripts. They told stories about learning from wise elders, and doing battle with cutthroats and rivals. And they told me about their search for a pirate captain more notorious than Blackbeard and more daring than William Kidd, a real-life Jack Sparrow, a man who’d been legend but whose story had been lost to time: the buccaneer Joseph Bannister.

I pressed the men for more details and asked questions until the restaurant closed. In the parking lot, they told me they’d be happy to talk further, but that a person couldn’t truly understand what they’d been through without seeing for himself where it all had happened.

Two weeks later, I met Chatterton and Mattera in the Colonial Zone in Santo Domingo, the oldest permanent settlement in the New World. We walked down the cobblestoned Calle Las Damas, the first paved road in the Americas. To my right, I could see the home of conquistador Nicolás de Ovando, built in 1502, complete with dungeons; to my left, the oldest church in the New World. After breakfast, the men took me to a sixteenth-century coral block structure. This was the laboratory at the Oficina Nacional de Patrimonio Cultural Subacuático, the place where artifacts discovered by treasure hunters were cataloged and divvied up.

I didn’t know where to look first. On one table was a nine-foot gold chain from the seventeenth century. On another was a set of slave manacles and an egg-shaped box made of pure silver. In a cement tank, lying in water, was an anchor used by Christopher Columbus. In the States, the anchor would have been protected by Plexiglas and guarded by lasers. Here, I was free to reach in and touch it, and I did. Time disappeared with the contact. This is what Columbus’s world felt like. Now I was feeling it, too.

Near the exit, I was shown to a final table, this one piled high with hundreds of pieces of eight, all from the seventeenth century. I scooped up as many of the silver coins as would fit in my hands, then let them spill onto the table. They made a sound I’d never heard before but somehow had known my whole life, a waterfall of muted chimes, dense and deep and old. This was the song that had called to the pirates. This was the sound of treasure.

That night, the men drove me to the north coast of the country, where they’d launched their search for the
Golden Fleece
, the greatest pirate ship that had ever sailed. In New Jersey, they had told me the outline of the story. Here, on a sticky hot night in which even the moon seemed to sweat, I heard more—about how difficult the quest had become for Chatterton and Mattera, how much they’d risked to undertake it, how they were still paying the price for going on this hunt for history, and for getting into the mind of a great leader and adventurer, the pirate Joseph Bannister. And I could feel, in between the swashbuckling details of their tale, how they’d been searching for more than a pirate ship all along.

When I got home, I didn’t feel much like going back to work on my old project. Instead, I woke my two young sons and told them the pirate story. Then, I decided to tell it to you.