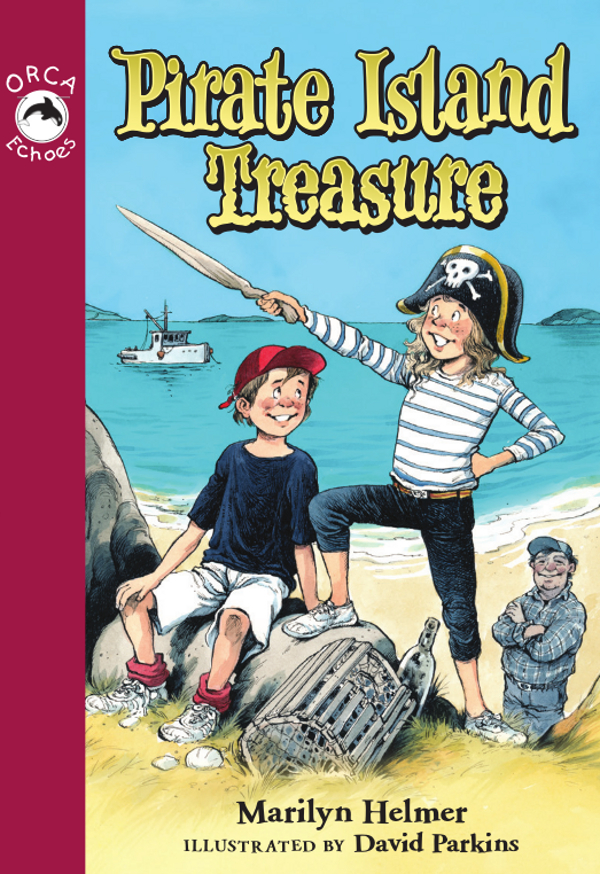 Summary
: Charlotte, Jacob and their grandpa head off to Pirate Island for an exciting day
of treasure hunting, playing pirates and storytelling.

To Jaxon, Brooklynn, Emily and Avaâ
this one's for you!

Chapter Ten: Under the Rock

Charlotte ran to the window. “Today's the day!” she shouted. The sun was up, bright and shining. It danced across the waves, scattering shadows along the shore.

She grabbed her binoculars and looked out at the ocean. In the distance was a ribbon of sandy beach. Cliffs rose, dark and mysterious, in the background. Pirate Island. Charlotte felt a shiver of excitement. She could hardly wait to get there.
“Heave ho and away
we go, treasure hunting, treasure hunting,”
she sang as she scrambled into her clothes.
“Heave ho and away we
go to look for pirate treasure.”

She grabbed her pirate hat from the bedpost and clamped it over her blond curls. She raced up the hall and banged on her brother's door. “Jacob, get up! Today's Pirate Island!”

Grandpa looked up from the stove as Charlotte came into the kitchen. “Good morning, matey,” he said. “I thought you were going to sleep all day.”

Charlotte shook her head. “Not today, Grandpa. You didn't forget, did you?”

“Was I supposed to remember something?” asked Grandpa.

Grandpa looked out the window. “I think it's going to rain.”

Charlotte saw the twinkle in Grandpa's eyes. “You're teasing,” she said. “The weather's perfect. Sunshine, white puffy clouds and no high waves.” She took some dishes from the cupboard and began to set the table.

Jacob came into the kitchen. “I smell blueberry pancakes,” he said. 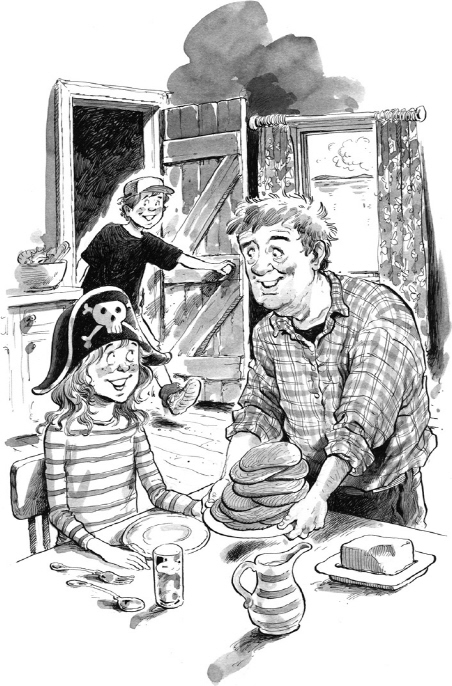 Grandpa piled the pancakes onto a plate. “We can't go treasure hunting on an empty stomach. Dig in, mateys. Then we're off to Pirate Island.”

With breakfast over, everyone scrambled to get ready. Grandpa hurried off to prepare
The Seawind
for departure. Charlotte washed the dishes while Jacob dried them and put them away.

Jacob put the last plate into the cupboard. “Come on, let's go.”

They locked the door and hurried toward the beach.

When they came in sight of the dock, Charlotte said, “Uh-oh. Grandpa's talking to Jack Mawdy.”

“I know. I love his stories,” said Charlotte, “but today isn't for storytelling. Today is for treasure hunting.”

Jack Mawdy was one of their favorite people. He owned Captain Jack's Fish & Chips shop. Captain Jack's was famous for two things. Jack was the best fish-and-chips cook in the county, and he was also the best storyteller. People came from all over to eat Jack's fish and chips and listen to his stories.

Jack saw them and waved them over. “Come see what I found.” A hat lettered
Head Chef
sat atop his wiry gray hair. A thick mustache curled around his ruddy cheeks. His blue eyes twinkled beneath bushy eyebrows.

Charlotte loved Jack's stories. She had already decided that one day she would be a famous storyteller too.

Jack held out his hand. “Do you know what this is?”

Charlotte and Jacob examined the object. It looked like a small leather case. Spiny tails trailed from each corner. 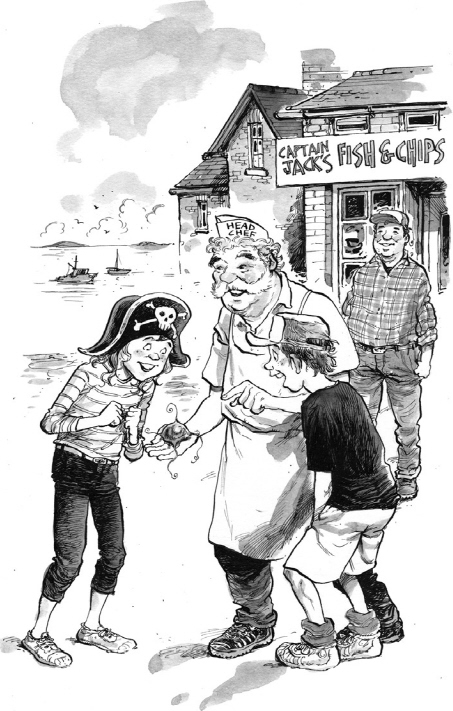 “It's an egg case from a skate fish,” said Jacob.

“Some people call it a mermaid's purse,” Charlotte said. “That's the name I like best.”

“Me too.” Jack chuckled. “There isn't much of a story in a fish-egg case. But a mermaid's purse, now that's sea treasure, and there's always a story in sea treasure. In fact, I'm thinking of one right now.”

“But I'll save it for later,” said Jack. “I hear you're off to do some treasure hunting today.”

Grandpa nodded. “We had best get going, but we'll be by for fish and chips later.” He winked at Charlotte and Jacob. “Avast, mateys,
The Seawind
is waiting.”

As they headed for the dock, Charlotte turned and waved at Jack.

“Don't forgetâthere are many different kinds of treasure,” Jack called to her. “And a story to go with every one.”

The Seawind
cut through the swell, splashing up ocean spray. Gulls circled lazily overhead. Sun tipped the bouncing waves with silver. Charlotte was too excited to notice. “Can't we go faster?” she begged.

“We're almost there,” Grandpa called over the engine noise.

Closer to the beach, Grandpa turned off the engine and dropped anchor. He climbed over the side and down a ladder to a rubber dinghy.

“All aboard,” he called up to Charlotte an d Jacob.

Charlotte climbed down the ladder first. Jacob was right behind her.

When they reached the shore, they pulled the dinghy high onto the sandy beach. They shrugged out of their life jackets and grabbed their backpacks.

“It's the best time for treasure hunting,” said Charlotte.

Grandpa tied the dinghy to a large rock. “Everybody ready?”

“What do you think we'll find?” Jacob didn't wait for an answer. “Maybe caves? Or secret hideouts?”

“Wait.” Charlotte stopped. “If we're going to look for pirate treasure, we have to have pirate names.”

Jacob spoke quickly, before Charlotte could choose first. “My name is Shark,” he growled in a piratey voice.

Jacob rolled his eyes. Leave it to Charlotte to take the best job, he thought. 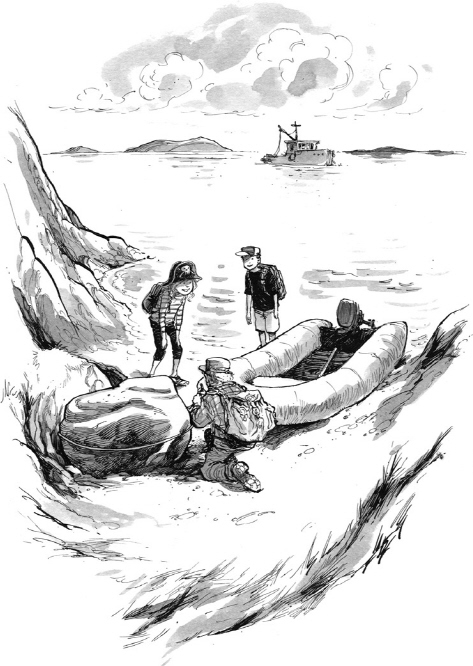 Bad Astrid by Eileen Brennan
The Candle by Ian Rogers
Paragon Walk by Anne Perry
The Stormchasers: A Novel by Blum, Jenna
A Shade of Kiev 3 by Bella Forrest
Not My 1st Rodeo by Donna Alward
The Beauty of the Dead and Other Stories by H.E. Bates
Gordon R. Dickson by Mankind on the Run
Bosun by V. Vaughn
Kill Decision by Suarez, Daniel
Our partner