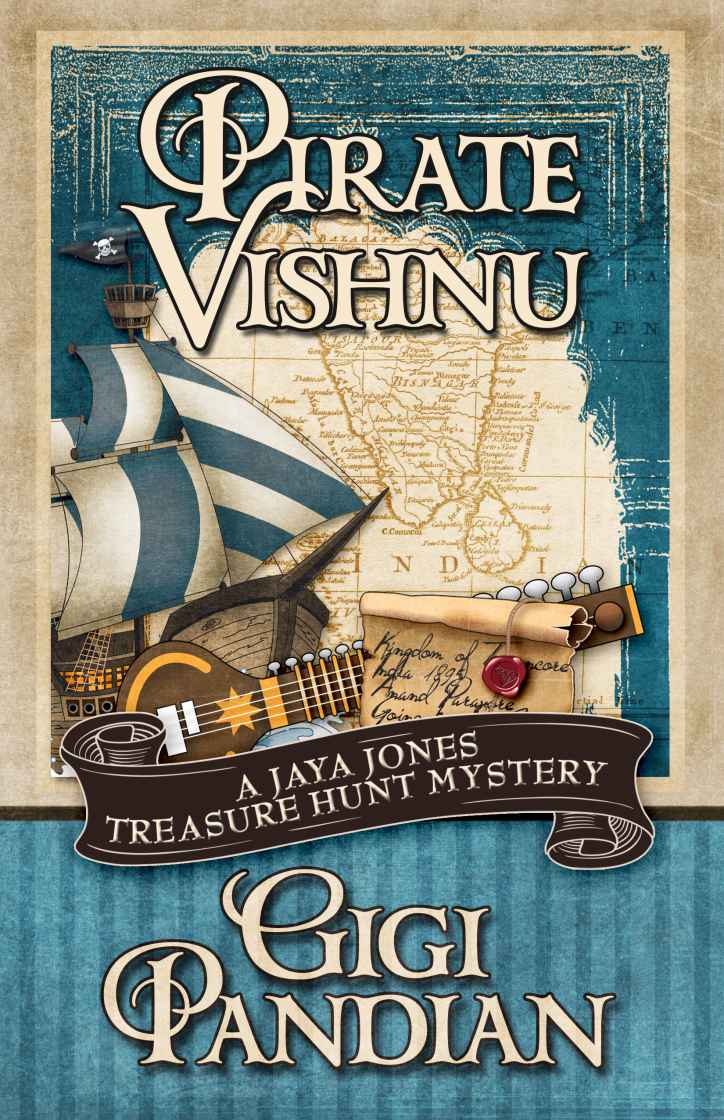 “Forget about Indiana Jones. Jaya Jones is swinging into action, using both her mind and wits to solve a mystery...Readers will be ensnared by this entertaining tale. Four stars.”

— Chantelle Aimée Osman of The Sirens of Suspense

“I applaud author Gigi Pandian for unearthing the forgotten history of India’s first immigrants to the United States and serving it up with plenty of suspense, humor and bhangra beats. If you are searching for a spicy new amateur sleuth series, this is the one.”

Author of
The Sleeping Dictionary
and the Rei Shimura Mysteries

“Globe-trotting historian Jaya Jones is off on another treasure hunt…
Pirate Vishnu
is fast-paced and fascinating as Jaya’s investigation leads her this time to India and back to her own family’s secrets.”

“If Indiana Jones had a sister, it would definitely be historian Jaya Jones.”

“How wonderful to see a young, new writer who harks back to the Golden Age of mystery fiction.
Artifact
is witty, clever, and twisty… Do you like Agatha Christie? Elizabeth Peters? Then you’re going to love Gigi Pandian.”

“Fans of Elizabeth Peters will adore following along with Jaya Jones and a cast of quirky characters as they pursue a fabled treasure.”

“In her fast-paced and entertaining debut novel, Gigi Pandian brings readers into a world full of mystery and history…As with classics in the genre, this first book in the Jaya Jones series will appeal to readers who enjoy delving into a complex puzzle.”

“
Artifact
is a jewel of an adventure, and Jaya Jones is a plucky heroine to treasure.”

“
Artifact
has it all—castles in the mist and caves at midnight; archeologists and fairies; hidden treasures and a bit of magic as well. Taking us on a journey from San Francisco to London to Scotland, Pandian weaves a mystery with all the elements of a good puzzle.”

Author of the Periodic Table Mysteries

— Penny Warner, Author of
How to Host a Killer Party

(in OTHER PEOPLE’S BAGGAGE)

All rights reserved.  No part of this book may be used or reproduced in any manner whatsoever, including internet usage, without written permission from Henery Press, except in the case of brief quotations embodied in critical articles and reviews.

This is a work of fiction. Any references to historical events, real people, or real locales are used fictitiously. Other names, characters, places, and incidents are the product of the author’s imagination, and any resemblance to actual events or locales or persons, living or dead, is entirely coincidental.

Writing a book is a solitary pursuit, but also one that couldn’t be done without the help of many people. I sat down with the idea for this book years ago and spent countless hours writing it, but it was a team of amazing people who made this book what it is. To all the wonderful people in my life: thank you!

My early readers, who I can always count on to tell me the truth about what’s working and what’s not: Brian Selfon, Diane Vallere, Rachael Herron, Lisa Hughey, Lynn Coddingdon, Nancy Adams, Ramona deFelice Long. This book wouldn’t have come together without each of you.

My writing pals, who follow the golden rule of chatting for 20 minutes and then getting down to work: Emberly Nesbitt, Sophie Littlefield, Juliet Blackwell, Mysti Berry, Martha White, Adrienne Miller, Michelle Gonzales. I would never have gotten to “The End” without you.

My publishing team: My incredible editor, Kendel Flaum, and the whole Henery Press team, for building something great with new authors. My agent, Jill Marsal, for believing in me for years without ever giving up.

My father, for inspiring this story and helping me get the history right. My mother, for always telling me I could do anything. And James, for not only putting up with the trials of  living with a writer, but being the most supportive guy imaginable.

The year was 1895. Typhoid fever swept through the south of India. The sickness wended its way through the Kingdom of Travancore. It swept across its beaches of multicolored sand, through the banyan trees, and along the winding streets of the villages. The monsoon season brought uncharacteristically strong rain to the southern tip of India that year—and along with it the disease.

Anand didn’t notice the rhythmic crashing of rain against the roof as his consciousness slipped away. A warm light enveloped the boy, pulling him toward its central glow. The aches of his thin body began to fade. A rough hand tugged his shoulder. Pulling him back.

Vishwan watched from the doorway as his older brother gasped. Their mother let out a strangled sob and held her boy close as he heaved violently back to life.

The next time Anand Paravar died, he was not so fortunate.

It was a decade later. 1906. Anand had left home in search of adventure. He often attributed his daring nature to that near-death experience during a formative time in his life. He wasn’t content to follow his destiny and remain within a few miles of his birth as a boat builder with the rest of the Tamil Paravar caste. At the age of sixteen, he became involved with the fledgling movement for Indian independence. At eighteen, he left home for the trading port of Kochi. At twenty, fleeing prosecution for his revolutionary activities, he left India and used his skills constructing and fixing boats to make his way to the Middle East, Europe—and then America.

He was in San Francisco the day the Great Earthquake of 1906 struck. He tried to save the life of his friend Li. Neither of them made it out alive.

At least…that’s the way the family legend of Uncle Anand goes. The story has been recounted by my family many times over three generations. And it’s what I’d always believed—until the knock on my office door that windy August afternoon.

“Jaya Jones?” the stranger in my doorway asked, his eyes darting between me and the placard on my door in the history department.

“Can I help you?” I asked, closing my laptop and looking up at him. There had been a bit of press around the treasure I’d recently uncovered in the Highlands of Scotland, so I assumed he was a reporter. Most of the media attention had died down after a few days, so I thought it was safe to come to the office to get some work done on a research paper I’d meant to finish months before. I’d been at my office for most of the day, adding the finishing touches.

A full head of salt and pepper hair flanked a distinguished face, and his features reminded me of someone from the northeast of India—European but with hints of China or South Asia. His tailored gray suit and the firm set of his jaw told me this was a man used to getting what he wanted.

“Are you a reporter?” I asked.

“No,” he said, stepping into the office. “Steven Healy.” The cadence of his voice made me wonder if he expected me to know the name.

I stood up to take his extended hand. His handshake was strong and curt, like the rest of his appearance. He was close to a foot taller than me, which isn’t uncommon since without shoes I’m a hair under five feet tall.

“Your great-grandfather’s name was Vishwan,” he continued. “Is that right?”

Of all the questions I thought someone standing in the door of my university office might ask, that wasn’t one of them.

“I can see that it was,” he said. “Thirty years of reading the expressions of jurors and one can see the subtle changes in faces.”

“Who wants to know about my Indian great-grandfather?”

“It’s a bit sensitive,” he said. “May I?” He indicated the open door, moving to close it before I could respond.

I don’t like situations being taken out of my control, but I admit I was curious. My great-grandfather Vishwan and his brother Anand were the only two members of my family my mother had ever talked about.

I tossed an empty paper coffee cup into the trashcan and offered him the seat in front of my desk. He sat down, but perched on the edge of the seat and leaned forward. “What do you know about Anand Selvam Paravar?”

“Does your law firm deal with estates?”  I asked, an idea dawning on me for the reason of his visit. “You have his belongings?” I knew almost nothing about most of my family, but the story of  my great-granduncle Anand’s heroic life was told to me as a bedtime story when I was a child, so I knew it well—including the pieces of his story that were missing. The diary my great-grandfather knew his brother kept had never been recovered.

Steven’s eyebrows drew together. Was he surprised I’d guessed the reason for his visit? Or was he confused because he had no idea what I was talking about?

“My family never received any of Anand’s possessions after he was killed in the Great San Francisco Earthquake,” I continued. “They assumed everything was destroyed in the fire, or at least the aftermath was so hectic here that there was no way to identify peoples’ belongings. But from the look on your face, I’m guessing that’s not why you’re here.”