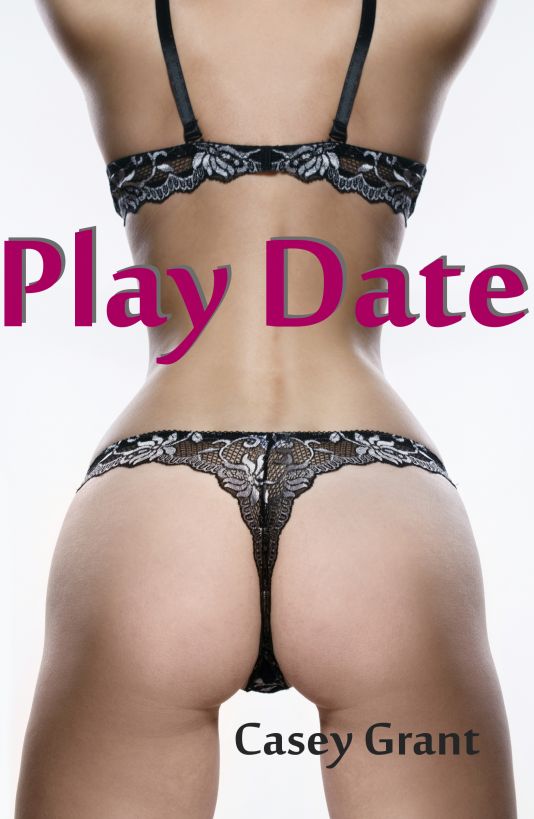 Lena Harris walked up to the front door and
rang the bell. The door opened and she was face to face with the
gorgeous (and single!) Shane Evans.

“Well, was my Ryan good today?” Lena said,
trying not to get lost in his brown eyes, dark hair and wrestler's
physique.

“I took Ryan and Bobbie for ice skating and
got ice cream,” said Bobby’s dad.

“Oh! What do I owe you for the skate rental
and ice cream?” Lena said, fumbling for her purse.

“Don’t worry about it,” said Shane. Her son,
Ryan and his boy, Bobby appeared behind him.

“Ready to go home, Honey?” Lena said to her
son, kneeling down to eye level.

“No!” Ryan yelled as an embarrassed Lena
grabbed Ryan, pulling him down the sidewalk and waving good-bye to
Shane and Bobby.

Shane never asked Lena to stay for coffee (or
a drink) and never had time to chat in the doorway. Whether Shane
was picking Bobby up at Lena's house—or Lena was picking Ryan up at
Shane's— pleasantries would be exchanged and then— zoom, off he
would go.

“Oh— Lena, one second...” said Shane
disappearing from the doorway.

Lena became excited. He must have tickets for
something (and if he did, he wouldn't ask you). Seconds later Shane
ran out to the sideway, handing a card to Lena. “Here—I wanted to
give this to you.”

“What is it?” said Lena, opening the
envelope.

“Bobby's birthday party invitation. We hope
you can come.”

“Oh. Of course. Sure,” said Lena trying not
to show her disappointment.

“You might want to stop hiding behind that
mop of hair and those poor-fitting clothes, “said Danielle, sitting
at Lena's kitchen counter, sipping a Mojito. “I know you’re still
grieving over Roger, but you need to start living again. You’re
only twenty-nine, you’re too young to be a widow.”

Danielle was right. It had been over a year
since Lena’s husband had been killed in that canoeing accident. It
was time to start living again. Thanks to a generous life insurance
policy and an excellent series of investments, Lena was able to
continue living in their upscale, master-planned community of Plush
Run. But she had indeed let herself go, paying little care to her
appearance. Lena knew she needed to get active again, start dating,
and maybe fire-up that real estate license.

“There's a beautiful girl under those
SteinMart clothes,” said Danielle.

“Its for women who've given up.” said
Danielle, her phone beeping. Danielle pulled the phone out of her
purse. “Hey! Check this one out, 'Plush Run Casino Night'! They
need volunteers to man the blackjack tables and serve drinks. 'Help
the ‘Plush Run Chorale’ raise money for the Pee-Wee soccer team's
trip to Sweden.'”

“It’s for your son's soccer team!” said
Danielle. “—And Cory's too. We HAVE to volunteer! This is a great
chance for you to get back in the swing of things.”

“Don't you want our boys to go to Europe?
What an opportunity!”

“They're a little young,” said Lena. “I don't
think they'll get much out of it.”

“Travel broadens the mind, said Danielle,
“This fundraiser will be fun and you need fun.”

The next day they met at the Fox and Hen bar
in Old Town Plush Run. It was Danielle’s idea to get a drink before
the meeting. Lena and Danielle both ordered Mojitos and chips. Lena
was slightly jealous of her lovely friend who was also a bit
younger. Danielle had gotten a big divorce settlement from her
restaurant owner husband after catching him in bed with his
eighteen year-old hostesses. Danielle now spent her days working on
her degree in Circadian Studies at nearby East-Central Lancaster
State. She prowled the campus, looking irresistible in her
short-shorts, tank top and reading glasses, all the while having
casual affairs with a different grad student each week. “The boys
are cute,” Danielle would say, “But since I’m the only grad student
with a million dollar home, I always end up feeling like a mom—
paying for everything.”

“It could be worth it,” said Lena.

“When was the last time you were at the
stylist?” asked Danielle, looking great today in a tight-fitting
long-waisted top with yoga pants.

“Yep. I can tell. I’m making an appointment
for you tomorrow. You’ve got to get that mess blown, trimmed and
straightened.”

“What do you know about Shane Evans?” Lena
said, changing the subject, leaning forward, her voice low.

“No. But he's out of your league. Don’t do
that to yourself. Every woman in Plush Run is after Shane
Evans.”

“Including you?” said Lena.

“You're not being supportive.”

“But I see him twice a week! Our kids play
together! We’ve bonded.”

“He’s divorced, loaded and gorgeous,” said
Danielle. “Just understand what a big bull’s-eye that is. His
playing field is HUGE.”

“Oh shit,” said Lena, looking off to the
side.

“That’s Brett Crater over there. Ryan got
written up at Fuzzy Pals for throwing blocks at his daughter. We
both got called into a conference. He's a total dickhead.
Threatened to press charges.”

Brett was in his mid-thirties with a shaved
head and beard. A general contractor before the housing collapse,
he now spent his days happily unencumbered thanks to his well-paid
corporate lawyer wife. It was also the reason he was sitting at the
bar mid-afternoon on a Wednesday. He caught sight of the two
ladies.

Brett was good looking with a solid build and
a chiseled face that, along with the trimmed beard, made him look
rugged and a little older than he was.

“Hello ladies,” he said with what looked like
a sneer.

“Sure is, honey” replied Brett. “What are you
doing tonight?”

“Uh huh,” said Brett as he looked down at
Lena staring out the window. “I’m glad to see your boy hasn’t been
beating up my daughter this week.”

“He wasn’t beating up on your daughter,” said
Lena still not making eye contact. “He threw a block at her.”

“In the interests of keeping the peace, I’ll
ignore that comment and wish you ladies a good day,” Brett said
walking out the front door.

“And he’s hung. Did you see that bulge?”

“Oh, God, please, don’t tell me you have
thing for him,” said Lena.

“Sure. If I had no self-worth or had a tumor
growing out of my head, I’d be totally hot for him— Oh no! We’re
late!” said Danielle glancing at the clock on the wall.

Lena and Danielle arrived to the community
center as the Casino Night volunteer meeting was winding down.
Walking up to a table at the center of the room, Meg Stauffer, the
event coordinator, told them that the only jobs still available
were cocktail waitresses.

“Oh,” said Danielle, uncharacteristically
subdued. “What do you think, Lena? Do you want to do it?”

“It’s for a good cause,” said Danielle.

“Uh, girls, check out the cocktail outfits
before you say that,” said a weary Meg as she reached into a bag
and pulled out two tiny pieces of fabric. She tossed them on the
table in front of them.

“Is this... Mylar?” said Lena holding up the
weightless material.

“Probably,” said Meg. “The Casino Night
fundraising package we purchased is big on realism. These outfits
are replicas of the waitress outfits at “Wave” in Vegas. They’re
only supposed to last one night before being discarded.”

“The fishnets will give you some coverage,”
said Meg.

“And there’s this too,” said Meg tossing a
plastic bag with a thong and a pair of pasties inside.

“Those are what you wear underneath. The
outfit is a tad volatile.”

“Danielle, we can’t do this,” said a
flustered Lena.

“Come on… it might be fun,” said Danielle
lowering her voice to a whisper, “Its a good way for you to meet
some guys.”

“I’m sure Shane Evans will be there,” said
Danielle, smiling.

Getting to Know You

Lena put the thong and fishnet pantyhose on
quickly. It was the pasties that were the problem. This was the
first time (and it would be the last) she had ever worn such a
thing. The pasties had adhesive in the back requiring you to get
them on right the first time.

Lena took the one-inch diameter stars out of
their pack and placed them over her nipples.

If there were to be any wardrobe
malfunctions, her honor would still be preserved.

She stepped into the body-hugging black Mylar
leotard, shocked by its sheerness. Lena swore that she could see
her pores through it. It had the smooth, tight sheen of a Mylar
balloon and it was obvious that it could tear with little effort.
“I can't wear this!” she screamed on the phone to Danielle. “Just
one bump against a table and this thing is in shreds!”

“It’s just for six hours, Lena. And remember,
they gave us a spare.”

“You didn’t get a spare?” said Danielle.

“And these heels! I’m not wearing these
eff-me pumps! They’re a foot tall.”

Lena arrived at the community center, wearing
a long coat and sneakers, carrying her heels in a Barney’s bag. She
was ushered into a back room that was doubling as a women’s
changing area.

She exchanged greetings with her fellow
volunteers, some of whom she'd run into from time to time at the
grocery store or at the pool. Most were wearing dealer attire—
pants, blouse and a vest. Unlike Lena, they were fully clothed.

Standing in a corner of the back room Lena
spied two other moms that had been saddled with cocktail duty. They
were looking at themselves in a full-length mirror in their
cocktail attire. Neither of them was in good shape. Both had a look
of horror on their faces, unable to avert their gaze from their
less than perfect bodies in the mirror. Lena knew one of the moms
from Fuzzy Pals. “Hi Jean, said Lena, “So you're on cocktail duty
too?”

Lena was feeling self-conscious now. She
retreated to a back corner and hung up her coat. She slipped on the
heels and was shocked to see that she was now a half a foot taller.
She looked down and saw that her already long legs seemed to go on
for half a mile. The outfit was strapless. It didn't just show her
cleavage but most of her upper breasts.

“Yes, at least someone here can pull this
off,” said Audrey sourly.

Lena walked over to the mirror, slowly,
hobbled by the heels. She stopped in front of the full-length
mirror, staring at the floor. Finally, after some seconds, she
looked up. She had been transformed into some suburban siren, her
straight brown hair cascading across bare, broad shoulders. Her
breasts were ample and her waist and hips were in perfect
proportion. She turned to her side and saw that her almost bare
ass—covered only by a wisp of fishnet hosiery—hadn’t fallen during
the last year of grieving. Lena was heartened that she looked good,
but horrified that she had no say in what parts of her body got
exposed. “I’m not doing this,” said Lena.