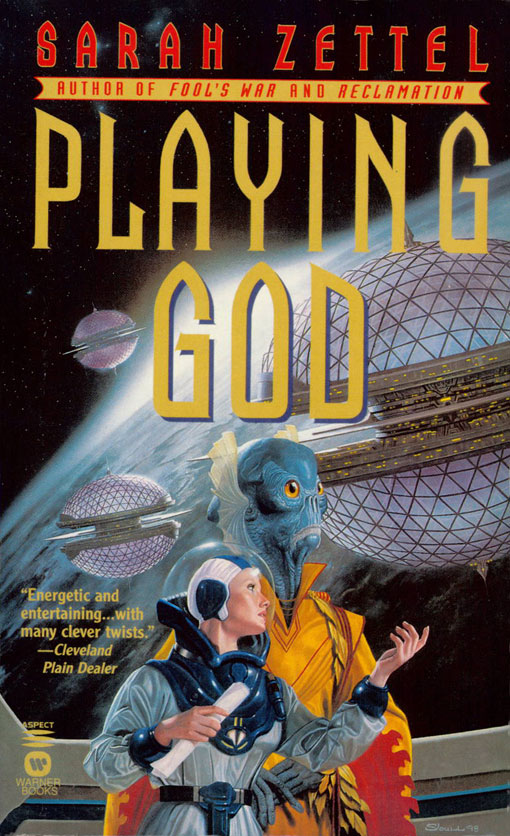 “Zettel's considerable gifts have been compared to Asimov and Heinlein, but she's better.”

“Readers will embrace this complex, multidimensional saga (the best of her three novels) not only for its depiction of exotic alien civilization and its action-packed plot, but also for its pertinent themes of tribalism, intolerance, and ecological disaster.”

“Zettel is a master craftsman … a good buy for any science fiction collection.”

“Sarah Zettel's first two novels established her as a writer to watch, a writer with a gift for character and situation, a writer who could keep you turning those pages as breathlessly as ever you have before. Rush right out and grab her third.”

A
New York Times
Notable Book of the Year

“This thought-provoking tale offers an energetic plot and a cast full of appealing characters.”

“This is such a stunning novel that it is hard to believe the author has only written one book previously. … An excellent choice for all SF collections.”

Winner of the Locus Award for Best First Novel

“Ms. Zettel's confident treatment of her ambitious material shows just how entertaining the ‘grand tradition of Heinlein and Asimov ’ can be in her sympathetic hands.”

“This one has scope and sweep, intrigue and grandiose technologies, and grand adventure.”

This book is dedicated to my husband, Timothy B. Smith

The author would like to thank Tim Smith, Laura Woody, and Dee Kenealy for all their expert input, the Untitled Writer's Group for their support, suggestions, and honesty, and, of course and as ever, Dawn Marie Sampson Beresford, who keeps on listening.

W
hat's that?” Praeis Shin t'Theria straightened up and twitched one sail-like ear.

Lynn Nussbaumer looked up at the tall Dedelphi, craning her neck as far as the helmet on her clean-suit permitted. Lynn, Praeis, and Praeis's two daughters, Resaime and Theiareth, were clustered around a worktable in Praeis's airy office at the Crater Town Planning Hall. Now, all three Dedelphi turned their ears toward the bank of opaqued windows set into the curving, white-plaster wall.

Lynn strained her own ears. A moment later, she heard a low, rumbling throb penetrating the windows, despite the sound filters.

“I've got no idea what that is.” Lynn got to her feet. The rumble increased. “Room voice, open the windows.”

“Opening,” replied the building's genderless voice. The silvered windows cleared to reveal a street paved with every shade of red that Martian stone and sand offered. The sudden flood of daylight glinted off Lynn's helmet and the layer of transparent organic that covered her from neck to boots under her functional blouse and trousers.

Normally, the street outside the Planning Hall held three or four knots of Dedelphi pedestrians and a transport or two. Now, it was crammed with Dedelphi of every age and shade. The rumble pressing through the window glass was the sound of their collective voices, shouting, cheering, arguing, and weeping.

“I've got it up already, Lynn,” said Resaime behind her.

Lynn and Praeis turned in tandem. Resaime had the wall screen lit up. She and Theia stood hand in hand in front of it, attention riveted on its scene. Lynn stepped around Theia to get a better view. Praeis just stared between the tips of her daughter's ears.

The screen showed what looked like a theater. The gallery was crammed with Dedelphi: sail-like ears, leathery skin, round, multilidded eyes, all watching a gathering on a proscenium stage. More Dedelphi filled the stage, crowding around an oval table. Lynn recognized the
Io Elath,
the t'Therians’ Queens-of-All, in their stark, black robes. Directly across from them stood the
Tvkesh-I-Rchilthen,
the Getesaph's Sisters-Chosen-to-Lead, resplendent in their silver-and-gold jackets.

Dominating the entire scene was a view screen hanging on the stage's back wall. Three soberly dressed Humans—two men and one woman, all magnified to at least three times life size—looked down on the crowd of Dedelphi. Behind the Humans shone the green triangle emblem of the Bioverse Incorporated enclave.

“By the Walking Buddha,” breathed Lynn. “Do you suppose they did it?” There had been rumors on the info-web for months that Bioverse Inc. was negotiating a bioremediation deal with the entire Dedelphi homeworld, something completely unheard of in all the Dedelphi's long, war-torn history.

As if to answer her question, the tallest of the Sisters-Chosen-to-Lead lifted her pen from off the stiff, white treaty board. “It is done,” she said in staccato Getesaph. A host of white-lettered subtitles flowed across the bottom of the screen.

On the screen above the stage, the trio of Humans beamed like proud parents.

Each of the Sisters-Chosen-to-Lead picked up a treaty board. Their jackets shimmered in the stark light as they walked around the signing table. The boards were symbols, Lynn knew. The real treaties would be tightly bound stacks of paper sealed into courier cases at the sides of aides and secretaries standing in the wings. These were just placards that said everyone had agreed to what was in those books.

The Sisters held the placards out to the Queens-of-All. With stiff, jerky motions, each of the three Queens took a copy of the treaty and bowed low over it, kissing the freshly dried ink.

Lynn sneaked a look at Praeis. She had gravitated silently toward her daughters, and now the three of them stood with their arms around one another. Lynn wondered what she could possibly be feeling. Praeis had been a general for those Queens, a Task-Mother, in t'Therian, and now she watched them receive treaties from their fiercest enemies.

The Sisters handed two more copies over to the Presidents of the Chosa ty Porath, and three to the Speakers for the Fil. Each of them took the placard and did nothing but stare at it, almost like they couldn't believe what was in their hands.

Behind the delegates of the major powers stood those who spoke for smaller nation-families, or Great Families, as the t'Therians called them. They were a broken rainbow of colors. Their skin was everything from the t'Therians’ bluish grey to the Getesaph's greyish pink. Their clothing ranged from jeweled purple to unbroken, midnight black. They received no treaties. Probably, they had been ordered by then-stronger neighbors to obey, and these grouped here had said they would. Each had presumably decided they had lost enough people to the plagues already.

The copies of the treaty boards distributed, the two Getesaph Sisters turned to the shifting audience.

“The Confederation is in place and will be enforced by all members. The delegates who have included their names and pledges on the treaty of agreement are all empowered to deal with the Humans. We here together will save these lands and islands that hold us all. Save them from this plague, save them from the poisons and pollutions that threaten to overwhelm them.”

A few more ragged cheers rang around the gallery, overlaid by calls of “Do it!” “Save the daughters!” “Find immunity!” in different languages.

“So,” breathed Praeis, visibly tightening her arms around her daughters. “The plague has accomplished for us what nothing else could.”

At that moment, the door burst open. Four Dedelphi, all the t'Therian blue-grey, two with daughters clinging to their backs and squealing with delight, charged in and surrounded Praeis, Resaime, and Theiareth. The Dedelphi pounded one another's backs and clasped hands and babbled on top of one another until Lynn couldn't follow what was going on, but evidently they were happy about the treaties.

“You must speak, Mother Praeis.” One of the t'Therians grabbed Praeis's hand and hauled her toward the door.

“All right, my Sisters! All right!” laughed Praeis. The hesitations Lynn had seen in the set of her ears and shoulders seemed to have vanished. They probably had, thought Lynn. They were whirled away by the enthusiasm of these members of her Great Family.

Praeis looked back at Lynn, her ears weaving in mock distress and real apology.

“Go. Go,” Lynn said, laughing and waving her on. “Who else should be making speeches right now?”

A storm of approval issued from the t'Therians. They half pushed, half pulled Praeis out of the office with the willing and noisy help of both her daughters.

Chuckling to herself, Lynn crossed back to the windows and looked out at the crowded street.

The Dedelphi were a powerfully built species. Praeis Shin stood a half meter taller than a tall man, even when her flexible, sail-like ears pressed flat against her scalp. Her adolescent daughters were Lynn's height. Their leathery skin hung in folds that rippled gently or forcibly, depending on their mood. Perfectly circular, multi-lidded eyes were set high above the long vertical slits of their nostrils. Thick lines of muscle ran under the milky skin of their lips. Their bellies swelled gently where the pouch protected their mammary glands. The effect was heightened by the stiff belly guards a number of the cultures wore under their clothes.

And right now they were making riot in the street below. Sisters whirled each other around. Mothers tossed their daughters into the air. Cousins stood talking, gesticulating wildly with hands and ears. In a couple of places, sisters had squared off for what might become honor brawls. Several of the clean-suited Human security guards apparently thought so, too, and edged along their balcony and rooftop stations for closer looks at the potential trouble.

With the filters gone, the crowd's roar pushed at her like an ocean wave. There had to be upwards of two hundred voices out there, all letting loose at full volume, and the noise doubled when Praeis's escort pulled her out of the Planning Hall.

Praeis's escort shoved her up onto the edge of the public fountain and bundled her daughters up beside her. Lynn folded her arms and nodded approvingly. They made a pretty picture down there; Praeis in her sienna skirt and cream tunic flowing over her belly guard, flanked by her daughters in blue-and-gold saris. The sun was still above the crater wall, and it touched everything with gold.

Praeis dipped her ears in respect and agreement to the crowd, and for the first time, the noise level dropped to a murmur.

“My Sisters,” began Praeis. “Sisters of my blood, my near family, my Great Family, and those who are sisters of strangers to me!”

Diplomatic,
thought Lynn. The t'Therians had a lot of expressions for those who weren't in the Great Family. The most complimentary was
Other.

“Today we learned of a great thing; our sisters at home have made a bargain that will end the plague that has killed so many of our mothers, our sisters, our daughters!” Reverent silence at that. “Today is the new beginning! Today we may hope for life, for the future, and for, greatest of all, a homecoming!”