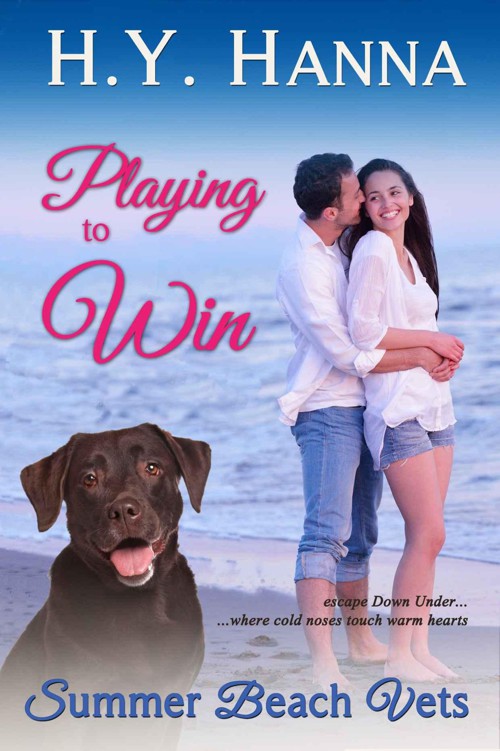 who was my dog, Honey’s very first vet.

Books in this Series

This book follows British English conventions in spelling and grammar.

Other Books by the Same Author:

There was going to be hell to pay if she was late again. Ellie made a face at her reflection in the mirror as she hastily scraped her long, brown hair back into a bun and secured it at the nape of her neck. No time for proper make-up this morning, she decided. Just a dab of concealer and a couple of jabs with the eyeliner pencil, then she was out of the bathroom and running into the kitchen, doing up the buttons of her shirt on the way.

No time for breakfast either, thought Ellie ruefully, as she gulped down a few mouthfuls of instant coffee. If she left now, she might still make the meeting on time. And this was a key one. The biggest presentation to their foreign investors since she had started working at Summer Beach Resort five months ago. She had to be at the top of her game.

Especially after what had happened at the board meeting last week. Ellie groaned silently as she thought of it again. The second-hand Toyota she had bought when she first arrived in Australia had been creaking along, but she had mostly ignored the groans and splutters, until last Tuesday morning when it had gone into engine failure. After fifteen minutes of mechanical CPR—mostly in the form of colourful threats while she frantically turned the ignition and pumped the gas pedal—Ellie had finally managed to resuscitate the car. But she had been nearly an hour late by the time she finally got to the meeting and it had been absolutely humiliating.

Ellie had given up a lot to get this job—including leaving her home in L.A. and moving across the Pacific Ocean to a new life in this little Australian seaside town. It was the biggest step up in her career so far and maintaining her professional image was everything. Besides, Ellie thought grimly, she never failed. All through high school and college, she had always been the best, always made sure that she played to win.

She glanced around for her laptop. It was still on the little table in the kitchen, where she had been working on her presentation last night. Putting her coffee cup down next to it, Ellie bent down to yank the power cord out of the wall socket. As she straightened, however, her elbow knocked the cup and hot coffee sloshed over the laptop keyboard.

“No!” Ellie gasped. She snatched up a tea towel and mopped the keyboard frantically, then picked up the whole laptop and turned it upside down, shaking it as drops of coffee rained down from the keyboard.

It was just for a second… she was sure the coffee hadn’t seeped in… it would be fine… it
had
to be fine… Ellie pleaded silently as she returned the laptop to the table and wiped it again with the tea towel. Then, holding her breath, she pressed the power button with her finger.

The USB flash drive
. Ellie felt a wave of relief wash over her. She had saved a back-up copy of the presentation on a flash drive last night. Thank God. She could just borrow a laptop when she got to the resort and plug the flash drive in—run her presentation from there.

Quickly, she ran to her handbag and checked—the flash drive was still there in the little side pocket. Smiling, she slung the bag over her shoulder, slipped on her heels, then left the house. She got into her car parked on the side of the street. The engine groaned and whined as she turned the ignition, then spluttered into silence.

“No, no… don’t do this to me…” Ellie muttered as she tried again.

More groaning and whining. A growl that sounded hopeful for a minute. Then a choking sound that was followed by a very definite last gasp.

Ellie flung open the door and ran around to the front of the car, pulling the hood up and staring at the tangle of grey metal inside despairingly. She had no idea what any of those coils and tubes did, but people were always fiddling under the hood when a car had problems, right? Maybe if she just poked around, she would miraculously find a way to jump-start the engine?

She was so busy peering under the hood that she didn’t notice the boy until he was standing right next to her.

Ellie jumped and smacked her head on the raised hood.

“
Ow
!” She rubbed the top of her head and turned to look at the boy. He was about nine, skinny, with fair hair and a smattering of freckles across his nose. And he was accompanied by a large chocolate Labrador who jumped up eagerly on Ellie, wagging his tail.

“Argh!” Ellie cried as the dog put his paws on her pristine white shirt.

“Down, Milo!” said the boy. “Down! Bad boy!” He grabbed the dog’s collar and dragged him off Ellie, but not before Milo’s paws had left brown streaks on her shirt.

This can’t be happening to me
, thought Ellie wildly as she looked down at herself. This was her last clean shirt that was ready to wear. She had slacked on the laundry this week and there was a pile of ironing waiting for her in the spare bedroom.

“I’m so sorry, miss! I’ve been trying to teach him not to jump up, but Milo doesn’t always listen.”

Ellie was about to answer him sharply, but something in the boy’s face stopped her. Some lost expression in his eyes, a certain vulnerability in that young chin. She swallowed her irritation and said, as calmly as she could, “Uh… it’s okay. I’ll put my jacket on over it.” She turned back to the open hood and smacked her hand against it in frustration. “Not that it’ll matter if I can’t get to the meeting on time.”

“Why don’t you call a spanner monkey, miss?”

“A what?” Ellie gaped at him. In the five months since she had arrived in Summer Beach, she had picked up quite a bit of Australian slang, but she still seemed to be flummoxed by some new bizarre expression every week.

“It’s a man who fixes cars,” explained the boy. “My dad says they come and help you if your car won’t run.”

He was right. She should have called the roadside assistance helpline right away. But knowing the usual wait times until a mechanic arrived, Ellie had been hoping that she could somehow revive the car herself. She sighed and looked at the confusing tangle of metal under the hood again. It seemed like she had no choice this time.

Going back to the driver’s seat, she reached inside the car for her handbag. As she pulled it out, the strap caught on the steering wheel and the entire bag flipped over, tipping its contents out onto the side of the road.

“Shit!” Ellie squatted down next to the pile on the ground. She glanced at the boy guiltily. “Sorry, forget I said that.”

“My mum says bad words like that sometimes,” said the boy, grinning. “Then she says more bad words when she realises that I was listening.”

Ellie found herself grinning back, in spite of the situation. She said, “I’m Ellie. What’s your name?”

“Will,” said the boy. “And this is my dog, Milo.” He pointed at the chocolate Labrador who was busily sniffing amongst Ellie’s things.

“Yeah, we met,” said Ellie dryly, trying to shove the dog’s big brown head away as she started scooping up the spilled items and returning them to her handbag. “Hey, stop that!”

Milo had picked up her leather organiser and was chewing it enthusiastically. Ellie wrestled with him and finally managed to pull it out of his jaws. She stuffed it into her bag and turned back to find that the Labrador was now trying to eat her lipstick.

Ellie screwed up her face as she stuck her fingers into the Labrador’s slobbery mouth and extracted her lipstick. She looked down at the silver tube, now covered in slimy dog drool. Great.

“Sorry,” said Will sheepishly. “Milo eats everything. The vet says Labradors are like that.”

“Well… just hang on to him, okay?” said Ellie in exasperation as she finished picking up all the spilled items.

She extracted her cell phone and quickly called the roadside assistance helpline, her heart sinking as she heard their estimated response time. Then she called the resort and told her assistant about the situation, hoping that there was some way the meeting could be delayed. Fiona promised to do everything she could.

Ellie hung up and paced in front of the car in frustration. She hated waiting. She needed action. Results. Something happening. The roadside assistance had said it might take an hour for a mechanic to come out, as they’d had a couple of other cases in the line before her. Ellie ground her teeth and suddenly wished that she was living in a big city. She had always loved the beauty and seclusion of Summer Beach, and had been pleasantly surprised at how quickly she had adapted to life in a small Australian town compared to her previous life in one of the busiest cities in the United States. But now, for the first time, she caught herself missing some of the big city benefits—like a public transportation system.

Ellie remembered that her landlord had left a handy list in the house with the numbers of local taxi companies. Maybe she should go back in the house and call a taxi, she thought, groping in her handbag for the house keys. Things were a complete jumble in her bag after being scooped back up from the ground. She pushed various items aside, searching for her keys. They were usually in the side pocket, together with spare tissues, contact lenses, a packet of paracetamol, the USB flash drive containing her presentation for the meeting…

Ellie frowned. Wait, where was the flash drive? She opened her bag wider and sifted through the items in it again. Her heart was starting to beat uncomfortably in her chest.

She couldn’t find it.

No, it must be in here. She searched again, then looked up frantically. She saw Will and Milo squatting by the curb next to her car, the boy playing with some rocks on the ground and the dog wagging his tail beside him.

Ellie exhaled in relief. She must have missed the flash drive when she was picking the things up. It was still on the ground somewhere. She dropped down next to Will and looked carefully at the section of road around them.

“What are you doing?” asked Will, eyeing her curiously.

“My flash drive is missing,” said Ellie, groping around on the asphalt. “Have you seen it? It’s really important. It’s got my whole presentation on it and some key data and figures. It’s about this big…” She stretched out thumb and forefinger. “It’s bright pink, with a plastic cover…”

“Oh, I saw something like that earlier,” said Will. “When you were picking up your stuff. Milo was sniffing it.”

“Milo was what—?” Ellie paused. She stared at the chocolate Labrador as a terrible suspicion began forming in her mind. She looked at the ground around them again, not wanting to accept that it might be true. But she could see no pink plastic USB stick anywhere. Instead, all she saw was a big, brown dog sitting in front of her with his tongue lolling out in a wide smile.