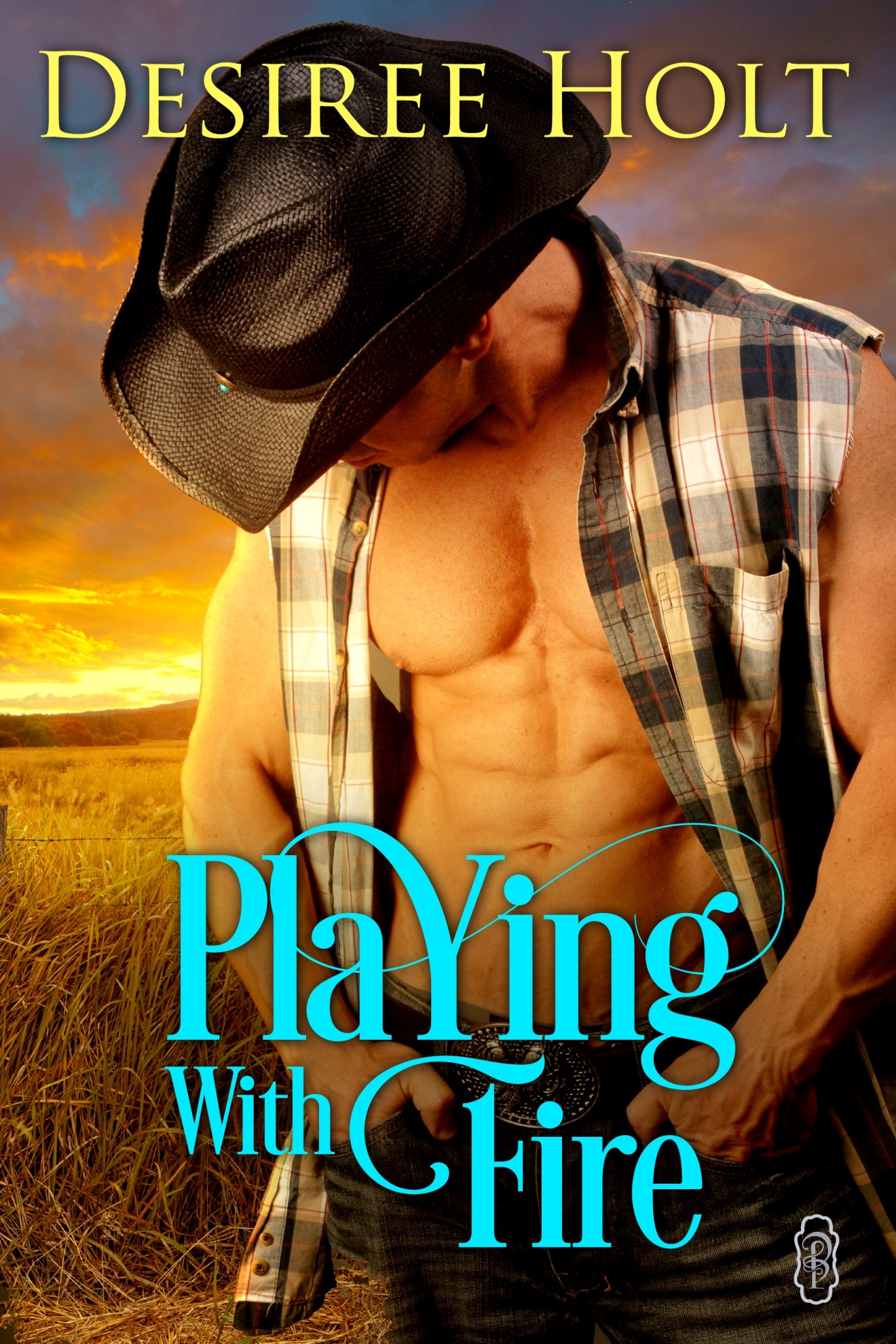 People ask me all the time if I always wanted to be a writer. I don’t know if “always” is the word but certainly for all the years I can remember. I was a voracious reads, as were my mother and sister and books held a royal place in our home. The funny thing is I always thought I would write mysteries because that’s what we all read. I didn’t read my first romance until 2004, when I was sitting with the same three chapters of a mystery on my computer that had been there for three months. But then my eyes were opened and they never closed.

Submitting that first book was scary, but after a lot of rejections you stop being scared and become determined I’m glad I never gave up, because I am having the most fun in my life I have ever had. (Well, maybe not
ever!
LOL!) So here I am, with all these titles under my belt.

Writing a book is a solitary experience but it never comes to the bookshelves, virtual or other, alone. For me it starts my treasured friend and beta reader extraordinaire, Margie Hager, who has the best eagle eye in the world. Thank you, Margie my love, for all the hours you put in to help me bring my stories to life. And for your friendship, which is a highlight of my life.

Thanks to the ladies of Belle Femme authors—Cerise Deland, Brenna Zinn, Dalton Diaz, Regina Carlysle and Samantha Cayto who are my BFFs. Guys, you make me smile on the very worst days.

Then there is my family. Do they read my books? Absolutely not! But they are the best public relations team in the world. From my daughter Amy who tells all her clients about me to my son Steve who makes sure he lets everyone he knows when I have a book released to my younger daughter Suzanne who is my good right hand and my granddaughter Kayla who is my wonderful left hand. Guys, I could not do it without you. If you see me at a convention, Suzanne will not be far from my side.

My cats, of course, keep me company while I write. And you all have seen pictures of Bast at the keyboard with me. She thinks she should get co-author credit!

Thanks to all the people who let me pester them for information, on all the different topics I tackle, from SEALs to Force Recon Marines to Delta Force soldiers to the local sheriff to the people at Beretta and the folks at the San Antonio Stock Show and Rodeo. I’m sure I’ve forgotten someone and if I have, I am so sorry because the time you continue to give me is very special.

Last but very far from least are all of you, my wonderful readers, who send me such great emails and posts and are so faithful. A special shoutout to Phuong Phen, Fedora Chen, Shirley Long and Patricia Sager who have been with me since my journey started and in frustrating times give me the inspiration to push ahead.

I love you so much. You are my extended family and I send you all many hugs.

There are a lot more stories to come. Please stay tuned.

Where can you find me?

You can write to me at
[email protected]
and I hope you will do that.

Where else can you find me?

The Bodyguard and the Dom by T.L. Reeve

Pursuing Their Fantasies by Kayleigh Malcolm

Romancing the Author by Kali Willows

Claiming His Cub by Kayleigh Malcolm

How Six Chefs Got It On by S. Ford Brown

One Night with His Wife by Sara Daniel

One Exquisite Night by Annie Anthony

Spurred on by Jon Keys

Her Real-Life Hero by Vicki Ballante

Love and Punishment by Sorcha Mowbray

He Came Upon a Midnight Clear

One hot summer, Cassie Fitzgerald gave her virginity and her heart to Griffin Hunter. When he married her sister, Diane, she fled Stoneham, and, for six years, nothing could make her return. Not her sister’s murder, for which Griffin was and continues to be the only suspect. Not her father’s suicide, which the police chief wants to sweep under the rug.

But when her mother dies, Cassie has no choice. As the sole surviving family member, she must return to Stoneham, Texas. She plans to meet her responsibilities and get the hell out. But Stoneham doesn’t let go so easily.

Together, they unravel the mysteries surrounding her sister’s murder. With each layer they peel back, more secrets are revealed. Can she uncover the secret Stoneham’s hiding, the riddle of Diane’s murder, and the answer to her relationship with Griff without destroying herself in the process?

To my faithful beta reader Margie Hager who makes all of this possible. Margie, without you there would be no Desiree Holt. Thank you from the bottom of my heart.

And to Sharon Slick Reads, who keeps me honest and whose support means so very much to me.

The call came at seven thirty in the morning
,
as Cassie Fitzgerald was getting ready for work. She was hardly prepared for either the sound of Harley Graham’s voice or the information he was delivering. She hadn’t spoken to him in years, and his announcement hit her like a blast of cold air.

“I’m sorry to be the bearer of sad news, Cassie, honey, but your mother passed away just after dawn this morning.”

She clenched the receiver to stop the shaking in her hand, processing his words. Her heart felt as if a fist was squeezing it, and tears for a woman she’d wiped out of her life were like grains of sand behind her eyelids. Memories she’d kept barricaded in the closet of her mind sprang loose to assault her.

“Cassie? You still there?” Harley prodded, as the silence extended.

She swallowed hard against the sudden tightness in her throat.” “Yes, I’m here.”

How did he expect her to react? She and her mother had never been close, and the six years since she’d left home had stretched their relationship to a thread past the breaking point. Months had passed since they had spoken. Not even Diane’s death had brought her back.
Especially
Diane’s death, No, Diane’s
murder.

Say it, Cassie. Your sister was murdered.

“I didn’t know she was ill,” she managed, wetting her lips with her tongue. She could picture Harley on the other end of the call, holding the receiver with infinite patience. As a young doctor, he had delivered both her and Diane, helped them through their father’s suicide, and now it seemed had tended the last of the Fitzgeralds who lived in Stoneham.

“She hadn’t been doing too well the last few months,” he said. “I wouldn’t exactly say she was sick, but it was obvious she’d been failing. I’ve been treating her for some heart problems, but, last night, I guess she just gave up the ghost.”

His words were edged with reproach, and his silent criticism hummed across the long-distance connection. Well, too bad. He wasn’t the one who’d had to flee to save himself. For six years, she’d been able to shut Stoneham right out of her mind—the only way she could save herself from emotional destruction. Now, damn it, everything was back and pouring hot saltwater into open wounds.

“I’ll have to make arrangements to take some leave from the office,” she told him. “But I can’t take more than a couple days. Let me give you my cell number.”

She would let them know right away she wouldn’t be gone for long. She had no desire to linger in Stoneham. The town held so many agonizing memories for her, had left so many emotional scars, that even a brief visit would strain all her emotional resources.

“I understand,” Harley assured her. “I sent the body to the funeral home, and Neil McCloud is handling all the paperwork for the estate. Your mother had him helping her with everything the last few months.”

“Handling? Estate?” Cassie puzzled. “What on earth could there be for Neil to take care of? My mother had nothing but the house and a small income.”

“I guess she just wanted to make sure everything was tied up nice and neat. She knew her health was bad. I’m guessing she didn’t want you to have any trouble with anything after she was gone.” He cleared his throat. “He left the funeral arrangements until you got there. Thought you’d like to take care of that yourself. That okay, Cassie?”

“All right.” There it was again, that slight accusatory tone. She pressed her fist to her forehead, trying to think. God, going back to Stoneham was like walking into the fires of Hell for her. But there was no way she could explain that to anyone without dragging all of her secrets out of the closet where she kept them hidden. “I’ll fly in to San Antonio and rent a car at the airport. Otherwise, it would take me two days to drive to Stoneham from here. I still have a key to the house, Harley, so I’ll go straight there.”

Extinguish by J. M. Darhower
The Most Expensive Lie of All by Michelle Conder
Lawman from Nogales (9781101544747) by Cotton, Ralph W.
The Firebird and Other Russian Fairy Tales by Arthur Ransome
War on the Cimarron by Short, Luke;
Submission Revealed by Diana Hunter
LaRose by Louise Erdrich
Threads Of Desire (Creative Hearts Book 3) by Jackson, K.M.
52 Reasons to Hate My Father by Brody, Jessica
The Girl in the Mirror by Sarah Gristwood
Our partner