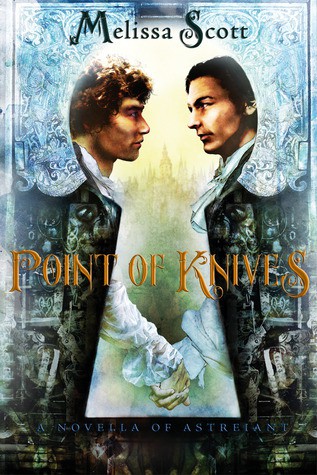 Published by Lethe Press at Smashwords.com

all rights reserved. No part of this work may be reproduced or utilized in any form or by any means, electronic or mechanical, including photocopying, microfilm, and recording, or by any information storage and retrieval system, without permission in writing from the publisher.

This book is a work of fiction. Names, characters, places, and incidents are products of the author’s imaginations or are used fictitiously.

Point of knives : a novella of Astreiant / Melissa Scott.

•
Praise for the Novels of Astreiant
•

“Scott returns to the intrigue-laden city of Astreiant in this novella, which bridges the gap between 1995’s
Point of Hopes
and 2001’s
Point of Dreams
…. Primarily an intriguing pseudo-police procedural, this fantasy also serves as a satisfying romantic story, with strong world building and great characterization that will leave readers wanting more.”

“Blood, alchemy, sexual tension, murder, intrigue, and truly wonderful characters: Melissa Scott’s
Point of Knives
delivers them all, in a world that seems so real, I’m surprised to look up and find I’m not living in it.”

—Delia Sherman, author of
The Freedom Maze
and
The Porcelain Dove

“Rathe and Eslingen are fascinating to follow as they navigate the deadly intrigues and dangerous magic of
Point of Knives
.”

“The city of Astreiant with its complex loyalties and magics is one of the
realest
imaginary places I’ve had the privilege of visiting. An unlooked-for pleasure, then, to read a new adventure of pointsman Nicolas Rathe and out-of-work soldier Philip Eslingen. And what an adventure! Murdered pirates, royal and academic and metallurgical politics, wild guesses and careful detective work—and just the apt touch of romantic tension.
Point of Knives
is an engrossing addition to the small canon of fantastical mystery stories.”

—Alex Jeffers, author of
You Will Meet a Stranger Far from Home

“
Points of Knives
is gorgeous addition to the Astreiant series. Melissa Scott takes this fantasy, fills it with memorable characters, and gives the reader more by incorporating a fully developed romance and a police procedural with enough twists and turns to satisfy the most finicky of readers. Highly recommended.”

—
Impressions of a Reader
blog

by Melissa Scott & Lisa A. Barnett

“Scott and Barnett use elegant and well-crafted language to carry the discerning reader into a world where astrology works. The two handle the interwoven characters, plots, and subplots with skill and an understated sense of wit.”

“An historical fantasy with a rich understanding of history and human motivation…. Half the pleasure of this unique book is in discovering its intricately detailed setting. Couple this with strong main characters and a vivid supporting cast and you’ll find a fantasy well worth seeking out.”

“Like Scott and Barnett’s previous collaboration,
The Armor of Light
(1987), this book features good writing, good characterization, and exceedingly superior world-building. Astreiant has a marvelous lived-in quality…. Place this one high in the just-plain-good-reading category.”

by Melissa Scott & Lisa A. Barnett

“A warmly inviting story where astrology and magic work, and ghosts sometimes name their murderer.”

“Readers of police procedurals will recognize the form of
Point of Dreams
, if not the details, which are necessarily changed by the fantasy setting…. Scott and Barnett blend the genres deftly, transposing their mystery plot seamlessly into their magical world, effectively building suspense and scattering both clues and red herrings with panache. The writing is skillful, as is the characterization…. Best of all, though, is the world-building. Scott and Barnett have created a setting so densely detailed that it’s at times hard to remember you aren’t reading about a real place….
Point of Dreams
is a thoroughly rewarding reading experience.”

Chapter One ~ Bodies at Dawn

Chapter Three ~ The Coils of the Law

Chapter One
~
Bodies at Dawn

Nicolas Rathe dragged himself awake at the sound of fists on his door, groped for flint and steel and the candlestick beside the bed.

Rathe suppressed a groan and got the candle lit, carried it to the table and went to open the door. The winter-sun was sinking, hidden behind the city’s roofs, and the sky outside the open window was just beginning to show light in the east. “What time is it?”

“Half past five,” Jiemen answered. She came into the narrow room, lantern in hand, set it on the table beside the candle, opening the slide to cast a better light. She’d been on the overnight shift, was dressed and ready, leather jerkin over a wool bodice and skirt, stout shoes showing at her hem. Truncheon and knife both hung ready at her belt.

Rathe reached for his breeches—there was no need to stand on ceremony with a fellow pointsman—and began to dress. The air from the window was chill, but it would warm up later on, two days past the Fall Balance, and he grabbed linen stockings instead of wool. “What’s amiss?”

“It’s Grandad Steen,” Jiemen said, and Rathe’s fingers stumbled on the buttons of his shirt.

She nodded grimly. “Dame Lulli sent to us just past second sunset, said one of her boys had tripped over him in the yard. Murdered and robbed, she said.”

“Damn.” Rathe hastily wound his neckcloth to close his collar, and shrugged himself into his coat. Grandad Steen was one of the sights of Point of Hopes, claiming seventy-five years of age and a long career as a summer-sailor—a pirate—and if someone had killed him, it was probably because they’d been fool enough to believe his tales of lost treasure and distant islands where mermaids haunted the lagoons, kidnapping unwary sailors to father their finny children. Rathe’d asked once, when he was an apprentice, how they’d stolen the sailors without drowning them, and Grandad had spun him a story of eel-skin head-bags to hold the air, and houses half in, half out of the water, connected to the sea by underwater tunnels too long for any but a mermaid to swim…. Glorious nonsense, all of it, and a loss to the city, though he doubted he’d find too many others to agree. “Do we know when?”

Jiemen shrugged. “Not yet. Dame Lulli said she sent to us straightaway, and told off her knife to be sure things were left as they found them.”

“Oh, she has a knife, does she?” Rathe found his tablets, slipped them into his pocket with his purse, and took his jerkin from its hook by the door.

“Not because she has a business to protect,” Jiemen said, with vicious mimicry, “and certainly not because she’s in the business of supplying certain ladies with suitable and fertile company—though that’s in her mind practically a public service—because any such business would require her to be licensed and bonded, but only because she’s giving him a job out of the kindness of her heart.”

Rathe grinned in spite of himself. “I’m sure that will go over well in the courts. How many guests were there—poor ladies benighted whom the dame took in out of pure pity, I’m sure.”

“I don’t know.” Jiemen saw that he was dressed, and picked up the lantern. “I sent Baiart on ahead.”

“Good.” Rathe hooked his truncheon onto his belt and blew out the candle. “Let’s go.”

The city of Astreiant was only just beginning to awaken, a few lamps showing in back kitchens and stableyards. They passed a pair of sleepy-looking live-out apprentices heading for the Hopes-Point bridge and their masters in Manufactory Point, and a few minutes later an empty cart overtook them, the driver sitting sideways on the tongue behind the plodding horse.

Jiemen looked sideways. “Oh, and I sent to the dead-house, too, Adjunct Point.”

Lulli’s house was easy to pick out, the only one with all the doors open and lanterns and torches blazing in the yard. The neighbors were up, too, peeping out their windows, one or two substantial dames hovering in their doorways, but Rathe ignored them. Biatris Austor, the newest apprentice at Point of Hopes and so the one assigned to the overnight shift, was hovering at the alley gate, and swung it open at their approach.

Rathe nodded, and looked at Jiemen. “Stay here and wait for the alchemists. And keep the neighbors away.”

He didn’t have to tell her to keep an eye out for anyone who was a little too interested in the business: they’d both been on the job long enough to know how often the murderer came back to check on her or his handiwork, and the more so when it was a killing as senseless as this one. He nodded again, and made his way down the narrow alley between the houses into Lulli’s back garden.

Wingman by Mack Maloney
De la Tierra a la Luna by Julio Verne
Warrior's Angel (The Lost Angels Book 4) by Heather Killough-Walden
Strangers on a Train I by Nelle L'Amour
The Lost Heart of Asia by Colin Thubron
Guts vs Glory by Jason B. Osoff
Inherit the Skies by Janet Tanner
Better Mate Than Never (New Adult Werewolf Romance) by Hunter, Adriana
The Darkest Secret: A New Adult Romance Novel by Pine, Jessica
Fuzzy Nation by John Scalzi
Our partner