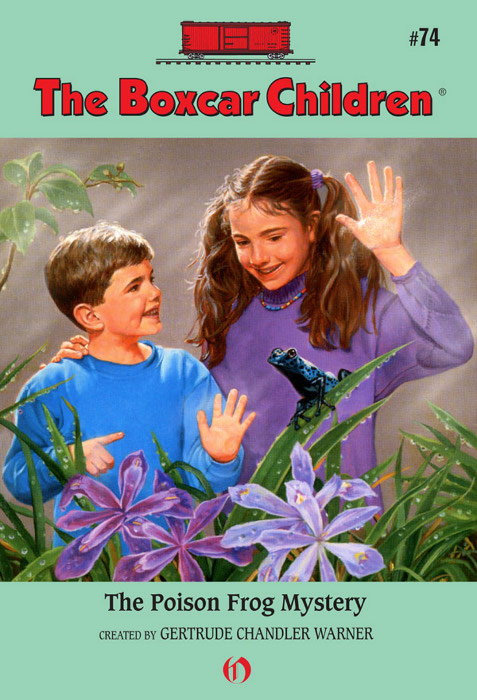 1. Something Is Definitely Wrong

CHAPTER 1
Something Is Definitely Wrong

Grandfather made a quick turn and slipped the car into the spot.

“Finally,” the handsome gray-haired man said with a smile. “Nice going, eagle eyes.” He patted six-year-old Benny on the knee.

The doors swung open and the Alden family filed out.

“It was getting so hot in there,” Violet added, waving her hand in front of her face. At ten, she was the second youngest of the four Alden children.

Henry, the oldest at fourteen, said, “It’s a perfect day for the zoo.”

“It certainly is,” Grandfather Alden said, looking up into the clear summer sky. “Is everybody ready?”

They started toward the entrance, Benny bounding ahead with excitement. The Aldens had spent many Saturdays at the Collingwood Zoo, but today was different. One of the zookeepers, Lindsey Taylor, was the niece of an old friend of Grandfather’s. Today was the day her special project—an endangered-species breeding program—was to be opened to the public. The program was designed to allow rare animals to increase their numbers in the safety of the zoo, rather than in the more dangerous environments in the wild. When the babies were strong enough they would be released back into the wild in the hope that someday the animals wouldn’t be so rare anymore. The program had been advertised in the local newspapers and on local television for months.

The children already knew what an endangered species was—a type of animal so rare, it was in danger of disappearing forever. Because the animals were so rare, the government didn’t want zoos taking any of them from the wild. Every now and then, however, a zoo was allowed to capture a few in order to start a breeding program. Only the best zoos were chosen. When the Collingwood Zoo turned out to be one of them, it was a great honor for Lindsey.

There was a long line to get into the zoo, but it moved quickly. When they got to the ticket window, Grandfather took his wallet out of his back pocket and said, “One adult and four children, please.”

“Have a nice visit,” the woman said as she took the money and handed Grandfather the tickets. The children made sure to thank her as they walked in.

Stepping through the turnstile and onto the zoo’s grounds was like stepping into another world. The very first thing they saw was a round fountain at the crest of a small green hill. In the center of the fountain stood a statue of two giant panda bears playing together.

“That’s so cute!” Violet said, and she snapped a picture with the camera hanging from her neck.

“Grandpa? Can I have a giant panda bear someday?” Benny asked.

Grandfather mussed Benny’s hair. “I don’t think so, Benny. Giant panda bears are very rare. They’re endangered, too. I don’t think even this zoo is allowed to have them.”

Benny considered this for a moment, then nodded. “Okay,” he said. “I don’t think Watch would want a giant panda bear as a friend anyway.” Watch was the Aldens’ family dog. 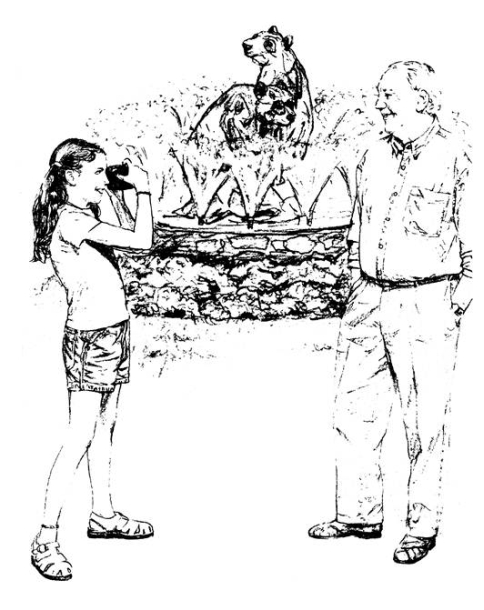 The others laughed. “Probably not,” Henry agreed, putting his arm around his little brother.

They walked around the fountain, toward the sign that gave directions to all the zoo’s many wonderful places. Before they were completely out of sight of the entrance and exit area, however, Grandfather and Henry both noticed something unusual—a pair of uniformed men carefully watching the people who were leaving the zoo. One of them stopped a woman and checked through a large bag she was carrying. Grandfather and Henry exchanged a glance.
What’s that all about?
the look seemed to say.

The information sign was decorated in rainbow colors and the zoo exhibits were cleverly named: THE BIRD BARN, THE REPTILE RANGE, AMPHIBIAN HALL, and THE ELEPHANT HIDEAWAY. An arrow pointed the way to each exhibit.

“Yes. It’s very colorful. I want to take a lot of pictures today. Anything that looks nice.” This came as a surprise to no one. Violet was a very artistic young girl, with a keen eye for beautiful things. Often, after taking photographs, she would spend hours drawing pictures at home based on the photos she had taken.

“Grandfather, I want to go to the Elephant Hideaway!” Benny said, pulling on his grandfather’s sleeve.

“Okay, Benny. We’ll go to
all
the exhibits, I promise.”

“Not as much as you do,” Henry joked, and everyone—including Benny—laughed. It was no secret that the youngest Alden had the appetite of a bear. Benny always got teased about it, but he didn’t mind. He was proud of his bottomless stomach!

Jessie patted him on the shoulder. “If you’re good, I’ll buy you an ice-cream cone,” she told him. She sounded like a mom more than a sister. But that was Jessie—a little more grown-up than most twelve-year-olds.

And Henry, as the oldest boy, often acted like a father. Jessie and Henry felt responsible for their younger brother and sister. Their own parents had died some years ago, and for a short time they were orphans. They had no place to live, no food, and only a few belongings besides the clothes on their backs.

Then they discovered an abandoned boxcar deep in the woods near their old home, and they moved into it. Soon after that their grandfather, whom they had never met, arrived in town. But when they heard he was looking for them, they hid. They’d been told that he was mean and would treat them badly.

Because of this, Grandfather had to pretend he was someone else at first. He wanted the children to like and trust him. By the time he finally told them who he really was, they knew he wasn’t mean at all. So they went back to live with him in Greenfield, Connecticut, where he had a beautiful house with a big backyard.

“Well, first things first,” he told them on this beautiful morning. “We should find Lindsey to let her know we’re here. Besides, I think she wants to show us some things that the other visitors won’t get to see. Some behind-the-scenes things.”

“I believe so, yes. Now, where are the main offices?”

Violet pointed. “Look at the bottom of the sign.”

“Well, someone certainly has a sense of humor around here,” Grandfather said. “Let’s go.”

The Aldens followed a winding path that led past a row of trees, some park benches, and a cluster of picnic tables. They came to a tall and stately old building that looked as though it had been recently repaired. It was built of white brick and had black shutters. The sign by the front door said MAIN OFFICES, and the door was wide open.

Stepping into the cool, sunlit hallway, the Aldens found Lindsey’s office. It was the second door on the left. The plaque read, LINDSEY AMANDA TAYLOR, ASSISTANT HEAD CURATOR.

The door was open only a few inches, so Grandfather knocked.

“Lindsey? Are you in there?”

Grandfather pushed the door back a little farther and he and the children peered inside. Lindsey’s office was one large room, with a tall window on the right side and a desk on the left.

Lindsey wasn’t at her desk, and there were signs that something was wrong.

Lindsey’s chair had been knocked over and was lying on the floor. Also, her phone was off the hook.

Grandfather stepped inside, the children following close behind.

“Something’s not right,” he said flatly.

Henry stepped behind Lindsey’s desk and picked up the phone. A string of beeps came from the earpiece, meaning that the phone had been off the hook for some time. He also noticed a little red light on the phone labeled NEW MESSAGES. It was blinking wildly. “You’re right, Grandfather,” Henry said. “Something definitely isn’t—”

At that moment, someone came running down the hallway and into the office.

Lindsey looked with surprise at James Alden and the children.

“Oh, Mr. Alden, something awful has happened!” She was clearly distracted and distressed and looked for a moment at her overturned chair. “I must have knocked this over when I got the news.” She righted the chair and turned to face the Aldens. “Two of the animals from the breeding program have been stolen!” she said.

Lindsey knew the Alden children had solved quite a few mysteries, so she brought them to the scene of the crime. It was a good-sized room in the small-mammal house. It was brightly lit, with a cement floor and pale yellow walls. A bank of cages lined the left side of the room along with a double sink with a hose, a large garbage can, and a long table. The wall to the right was filled by shelves of supplies, bags of food, and some cleaning chemicals. The faint scent of animals hung in the air.

Lindsey paced from the shelves to the sink and back again. She was obviously upset.

Grandfather had known her since she was a small child. She’d always loved animals, so it came as no surprise that she ended up working for a zoo. Eventually the Alden children got to know her, too. Jessie and Violet particularly admired her. She was tough and smart, and she stood behind the things she really believed in. Her sharp green eyes didn’t miss anything, and she usually wore her long blond hair in a ponytail to keep it out of her face.

“They were in here,” she told the Aldens, stopping at one of the cages. There was a little paper card in a slot on the door. It read, BLACK-FOOTED FERRETS. Under that, someone had written, TINA AND TIM. “They were going to be shown this morning,” she added.

She crossed the room and unhooked a small brass latch on the wall. A broad panel dropped down. It looked like a secret door. “Take a look in here.”

The Aldens came over and peered into a tiny landscape. There were sand, dead tree branches, tiny bushes, and piles of rocks. Inside one rock pile was a little pool of water. At the far end, in a dark corner, was a small hill with a hole in the center. The hole was about as wide as a baseball.

“This is
cool
!” Benny gawked. Suddenly being a zookeeper seemed like the greatest job in the world.

“Beautiful,” Violet added. “And so real.”

“I guess this is where Tina and Tim were supposed to go,” Henry volunteered.

Lindsey nodded. “That’s right. We were going to show them for the very first time today. But now ...”

She pointed to the front of the enclosure. The glass had been covered by big sheets of brown paper. The Aldens could see the shadows of passing visitors on the other side. One of the zoo workers had written something on the paper. Although the words were backward, the Aldens could still tell what they said: THIS DISPLAY TEMPORARILY CLOSED. SORRY!

“Some of our visitors are going to be upset!” she told them. “Black-footed ferrets are very rare. Some people have traveled a long way to see them. We’re one of only three zoos in the world that has them!”