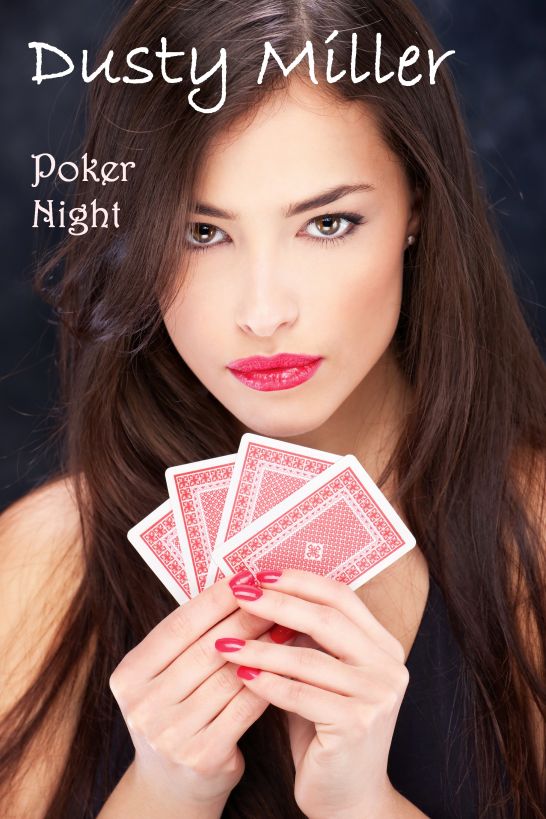 The following is a work of fiction. Any
resemblance to any person living or deceased, or to any places or
events, is purely coincidental. Names, places, settings, characters
and incidents are the product of the author’s imagination. The
author’s moral right has been asserted.

Austin
was tall, with soft features, yet boyishly lean. He had sad brown
eyes and a grin that lit up the place. When he got going, his
one-liners were real zingers, and some nights they just couldn’t
stop laughing. They’d been out a few times with a bunch of friends,
but then they started going out, just the two of them.

Austin was so scared on the phone when
he called the first time. It really touched her, in a man so big
and confident otherwise.

So far, he was painfully shy about
asking.

Bethany had her mind all set to do
something about that. Austin had kissed her when dropping her off
after a movie, more than a week ago now, but then on the next date
he was so shy and diffident. It was like he couldn’t do it. The
first date was a wake-up call. They shook hands afterwards. She
really liked Austin and Ian was off in university. She was
convinced Austin was a virgin. Sex with Ian was all right, the few
times they actually did it. He’d pursued her all through
high-school, in a half-kidding, half-contemptuous manner. After
they had sex a few times, he was just different. He didn’t pay a
whole lot of attention to her after a while, and then expected her
to put out or something, at the drop of a hat. She wasn’t his first
choice, not at all. Not anymore. He was secretive. Something had
happened.

She was a free woman—one who just
might do it for Ian when he had no one else on the line. Any deep
affection she’d had for him vapourized. She’d relied on his
attentions in some ways. She liked Ian. In many ways, he was a nice
guy, cute enough in his own way. Ian was better than nothing. And
he was gone, bitter realization that it was.

Austin was different. He was obviously
interested, and didn’t act like he owned her. Such a gentleman,
too, always running around to hold the door open for her, holding
hands like he loved it when they walked any distance. He couldn’t
get enough of her. Austin had an inferiority complex to beat
anything she’d ever seen, unlike dear old Ian. And yet he was
good-looking, he was smart, funny, he dressed well. He had a job
and made good money. She had a feeling about Austin. Austin would
set out to change the world, and she liked that. Austin was a
hopeless romantic, and he kept calling her up. What was not to
like? She felt safe when she was with him, that streak of
protectiveness was very appealing. He was afraid of messing it up,
which really said something about how he felt about her. For him,
the stakes must seem very high. There was nothing casual about
Austin. That intensity intrigued Bethany very much.

The TV went on and Austin headed to
the kitchen. She settled onto Austin’s sagging red couch, with
swirling paisley upholstery and art deco arms that might have
looked elegant in the 1930s. They had stopped at the liquor store.
He returned with two brimming glasses of a cheap, bubbly wine. She
insisted on chipping in, and made him buy a magnum. She was totally
prepared, serene in her mission’s purpose and outcome.

“
I laid around in the back
yard all day. Tanning. I got a bit of colour, I guess.”

“
Well, good for you! Some
of us have to work for a living.”

She laughed at that. She started a
summer job on Monday, although she hadn’t been accepted at school
yet.

She was just softening him up a
little. She wondered what was going through his mind as the mental
picture of her in a bikini registered on his face with a far-off
look and a flurry of blinks.

He gave her a funny little grin, and
his eyes dropped quickly away.

“
There’s not much on
tonight.” He’d checked the listings, but Bethany liked Nature on
PBS and he’d always had an interest in wildlife and the outdoors.
“I suppose it really doesn’t matter.”

Her show came on in a couple of hours.
He had promised to watch it and not to laugh or make fun it. She
loved that show. That was fine, as long as she watched it with him,
he was happy. Austin felt the lure of distant lands. He had dropped
out of biology at university, so he could make enough money to go
on. It was all big dreams at this point. The pair of them had such
great conversations, just the two of them, laughing and giggling,
with all of life ahead and just waiting out there. When he called
as promised, Bethany suggested a quiet night at his
place.

Austin grinned, shaking his head at
the notion.

He rolled up a joint. The lighter was
almost gone and he flicked it and flicked it. Austin had his own
place, up on the second floor of an old two-story
brownstone.

They sat and passed it back and
forth.

He looked over, with eyebrows
raised.

“
Absolutely!” He laughed
and she chuckled along.

What the heck, she thought.

“
Exhale, and try and hold
it out as long as possible.”

Austin complied as Bethany sucked in
the biggest lungful of pot she’d ever had.

Beckoning Austin forward, his eyes
bugging out with the need for air, she stuck her mouth on his and
clamped her free hand behind his head.

His mouth turned up in an incredulous
grin, but as he stared at her, he didn’t try and pull away.
Committing to it, it made a much better seal. It turned into a real
kiss.

She blew out hard, as Austin’s lungs
expanded and his eyebrows rose. She pushed and pushed on her
diaphragm until she could blow no more. He gave an aggressive
intake of breath and she almost collapsed in his arms, seeing
little black and white curlicues in the edges of her vision.
Austin’s lungs were at lot bigger than hers.

He broke off and topped up with fresh,
cool air, not letting her get away just yet.

Austin had some aggression in
him.

Her body was warm and heavy in his
arms. Her hair smelled fresh and clean.

She’d seen that aggression when he was
driving. He was very fast and very good in that little yellow car.
Austin tried to control it, but when someone pushed too hard, oh,
well…too bad for them.

Austin brought his mouth up to
hers.

She sucked in as much air and smoke as
she could and then they both gasped and fell back at the same time,
eyes locked in discovery. She licked her lips and he swallowed,
fearful of his own strength sometimes. She was warm and cuddly
again, half in his lap after that little episode.

With a long look into Austin’s eyes,
Bethany casually reached for a glass.

“
Care for a drink?’ She
took in a good mouthful and sat up straight, daring him.

He came right in for it, clasping on
to her mouth with care.

She shared the wine with him, the look
on his face intent and serious.

Finally they broke off and swallowed,
Austin struggling for air. She smiled and nodded.

They reached for each other as of one
mind.

They cuddled face to face, inches
apart. Her mouth was set in a quirky little grin and Austin had a
look that smacked of disbelief. He was licking his lips and
breathing heavily, still finding it hard to accept that she really
liked him. She wanted Austin. She watched the thought go through
his head. His eyes clouded and then refocused. She nodded, a look
of serious intent on her brow.

His left hand was on her outer thigh.
Bringing it up behind her head, as their right hands clasped back
and forth in unspoken communication, Austin kissed her again. Just
to let him know, Bethany squeezed his hand, parted her lips and
darted her tongue into his mouth.

Staring, Austin rose up and around
her, enveloping her and totally immobilizing her. All she could do
was to grab on tight with her free hand and squeeze him.

Austin pushed his tongue into her
mouth and she just let everything go, writhing and pushing back,
closing her eyes and breathing through her nose. He broke off, not
knowing how far to push it and not wanting to lose Bethany just
when things seemed to be going well. He was holding on to her boob.
His jaw dropped. He clasped at her hands, suddenly afraid to look
at her. She decided to let him think on it for a while. Repressing
a smirk, she sat up a little straighter.

They were very close, watching and
listening to the set in a distracted manner, drinking wine in
between bouts of heavy petting. Some other show was on TV now, but
that was the farthest thing from their minds.

“
How about some
cards?”

“
Huh?” His eyes searched
hers.

There was a suspicious bulge in his
pants.

She gave him a pat on the
shoulder.

“
Uh, yeah.” Austin got up,
sort of carefully turning the groin area away from her, and still
in a slightly hunched-over posture turned the TV down.

His back to her, he went over to the
stereo and put on some music, some long jazzy thing that wouldn’t
require constantly changing recordings. Half blinded by brain fog,
his hands trembling, he got lucky and it was just the thing. Austin
was a man of action. The strong, silent type. She smiled again, not
looking up. He had pretty good taste in music, too. Austin came
back and sat down.

She was already riffling the deck,
always laying there on the side table beside a cribbage board that
had once belonged to Austin’s grandfather. His mother’s side of the
family was all hot for cards.

It wasn’t exactly cribbage she had in
mind.

“
So, ah. What do you want
to play?” Austin had played cribbage, and crazy-eights, Kings in
the Corner, a few simple games.

“
Do you know euchre?
Cut-throat euchre?”

“
No, sorry.” His aunts and
uncles were just nuts for euchre, but wouldn’t let him play with
the grown-ups.

They took it pretty
seriously.

Her sister’s boyfriend knew Austin and
said he thought he could play poker. According to Joe, who played
for fairly big money Thursday nights with friends, Austin wasn’t
very good at it. Bethany had learned poker from her dad, an
engineer who built refineries all over the world. Her dad was very
good at it.

“
Jeez, I don’t know.”
Austin shrugged. “Whatever you want. You can teach me
how.”

Hideous Kinky by Esther Freud
The Library of Shadows by Mikkel Birkegaard
Heart Of The Dragon (Her Dragon's Bane 3) by Harmony Raines
Thief of Mine by Amarinda Jones
A Thirst for Vengeance (The Ashes Saga, Volume 1) by Knight, Edward M.
Darshan by Chima, Amrit
Asgard's Conquerors by Brian Stableford
Bicycle Built for Two by Duncan, Alice
The Red Door Inn by Liz Johnson
Blame it on Texas by Amie Louellen
Our partner