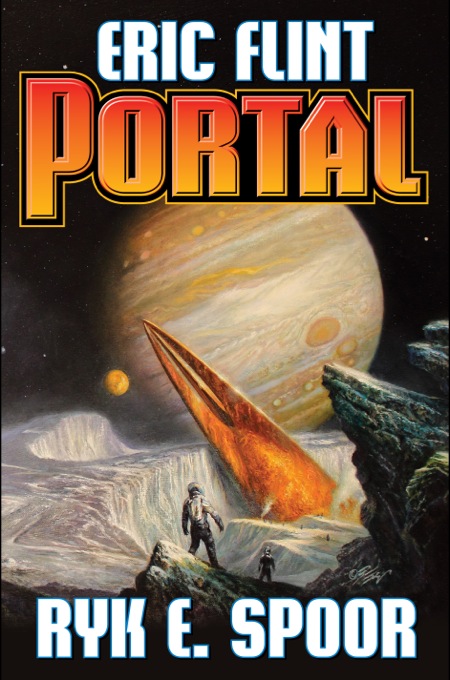 The Ring of Fire series:

1634: The Baltic War
with David Weber

1634: The Galileo Affair
with Andrew Dennis

1634: The Bavarian Crisis
with Virginia DeMarce

1635: The Cannon Law
with Andrew Dennis

1635: The Tangled Web
by Virginia DeMarce

1635: The Eastern Front
by Eric Flint

1636: The Saxon Uprising
by Eric Flint

Forward the Mage
(with Richard Roach)

The Rats, The Bats & the Ugly

The Shadow of the Lion
•

Much Fall of Blood • Burdens of the Dead • Sorceress of Karres

Belisarius I: Thunder at Dawn

The Tide of Victory

Belisarius III: The Flames of Sunset

The Course of Empire

The Crucible of Empire

1. the act or process of returning to a normal condition, especially from sickness, a shock, or a setback; recuperation

2. restoration to a former or better condition

3. the regaining of something lost

4. the extraction of something useful from materials or a situation which is otherwise useless or poor

I still have no answers.

That was the thing that kept him here now in an office lit mostly by the ruddy glow of Mars swinging regularly by. Nicholas Glendale was
used
to having answers, to knowing what he wanted to do and how to achieve it. By the time he’d been five, he’d known he wanted to be a paleontologist, and he’d succeeded—beyond his expectations, even.

Then when one of his best students, Helen Sutter, had discovered something impossible and the impossible had turned out to be true—a fossil of an alien creature whose species had built bases across the Solar System in the days of the dinosaurs—he had wanted to become a part of that, follow the dream into space. And he’d succeeded in that, too, and again beyond his wildest dreams.

But now that brilliant student, and her friends—
his
friends as well—now all of them were gone, and a hundred other people with them. The faces refused to leave, the crew of the half-alien vessel
Nebula Storm
kept coming and going like phantoms in his mind: Helen, with her blond hair tied back, looking at a dessicated
Bemmius Secordii
mummy sixty-five million years old; A.J. Baker, irreverent and irrepressible sensor expert whose blond hair, cocky smile, and not-too-well hidden vulnerability had eventually led to his marriage to Helen; dark-haired, dark-skinned Jackie Secord, who’d found the first trace of Bemmie on her family’s ranch and later become a rocket engineer for the first manned interplanetary vessel,
Nike
; Joe Buckley, brown hair above a face whose lines showed patience and acceptance of whatever the universe threw at him—good or bad. Madeline Fathom, golden-blonde, delicately built, the single most dangerous—and most reliable—person Nicholas had ever met, one-time agent for the least-known American intelligence agency, later Nicholas’ own right hand and married to Joe; Larry Conley, tall and always somehow stooped over as though to apologize for his height, slow-talking but with encyclopedic knowledge of astrophysics.

But
Nebula Storm
was lost with its crew, as were over a hundred others on the ship she had been pursuing, the immense mass-beam drive vessel
Odin
, both vessels lost with all hands in what was in all likelihood an act of corporate greed gone utterly insane, or—possibly—a terrible accident triggered by misunderstanding.

And now he had to decide what to do. The others at Ares Corporation—Glenn Friedet, Reynolds Jones, and the rest of their Board—were waiting on his decision as “Director Nicholas Glendale of the Interplanetary Research Institute of the United Nations.”

He snorted at the pomposity of the title and stood angrily, the rotation of Phobos Station keeping him as firmly planted on the floor as if he’d been on Earth. Out of habit he began pacing again.
If I keep this up, I’ll wear a hole in the exceedingly expensive imported carpet.

It had all started so simply—as most disasters do. With the discovery of the first two alien bases, one on Mars and one on Mars’ moon Phobos, it had become a virtual certainty that there must be other alien installations, possibly with incalculably valuable artifacts within, waiting for salvage elsewhere in the Solar System. The Buckley Accords gave the first discoverer to, literally, set foot on any other system body long-term rights to exploit resources on that body, within a certain range of that first footstep. That was the starter’s gun on the greatest race in history—a race to discover these new locations and reach them first, claiming those resources for the country—or the corporation—that first placed a human being upon the planet, moon, or asteroid on which the alien base was located.

Larry Conley had made it three-for-three discoveries for the Ares Corporation; his co-worker, A.J. Baker, had made the first earthshaking discovery within Phobos, and later found the pieces of the puzzle that led to a huge installation in Mars’ Melas Chasma region, and now Larry had found unmistakable clues indicating that the minor planet or giant asteroid, Ceres, was the site of another alien base.

Keeping the discovery a secret, Ares and the Interplanetary Research Institute (usually just called the IRI) had prepared and finally launched an expedition to Ceres, locating and setting foot directly above the base—which turned out to be at least as extensive as the one on Mars.

And that,
Nicholas thought sadly,
was probably the last straw.

The European Union’s flagship vessel, the
Odin
, had visited Ceres and remained there for some months. Cooperation had seemed to have been established, and many wonderful results had come of it—ranging from the commercialization of room-temperature superconductors found on Phobos to the discovery of structures which might hold the key, finally, to successful commercial fusion, and a completely intact alien vessel whose drive system and purpose was a mystery.

But the
Odin
had a secret agenda, and within the mass of scientific data one of their people—astronomer Anthony LaPointe—found indications of
another
alien installation on Enceladus, a moon of Saturn known to have many strange characteristics indeed. Keeping their discovery secret, the
Odin
prepared for departure, even as a meteor impacted the IRI-Ares base and took out her main reactor.

Except that it
hadn’t
been a meteor, and A.J. Baker had been able to show that it was almost certainly a projectile from a coilgun, a magnetic acceleration cannon concealed—against all international and established space travel law—within the mass-driver elements of
Odin
. There was no
proof
of this, and neither the IRI nor Ares could afford to accuse the European Union of such things without ironclad evidence. The action showed that their worst fears had been true; the security officer of
Odin
, Richard Fitzgerald, was an old adversary of Madeline Fathom’s and was just as willing to use extreme methods to assure the completion of his mission.

Ares and the IRI had, in the meantime, discovered the principle behind the alien vessel’s drive system—something called a “dusty plasma” drive which acted like a solar sail combined with a magnetosail, requiring no physical “sail” to capture much of the sun’s incident energy to propel it—and using the most advanced nanotech sensor and effector motes had restructured the key elements to work again. For various reasons the Ares personnel decided to attempt to beat the
Odin
to the now-known base on Enceladus, and revived the sixty-five million year old vessel, launching it as the IRI vessel
Nebula Storm.

The modified alien vessel had performed well and the
Nebula Storm
caught up with
Odin
near Jupiter, where both vessels were expected to perform an “Oberth Maneuver” to increase their speed and change their course to send them on a rendezvous with Saturn and Enceladus. The situation had been tense but Nicholas had felt that it was under control. Madeline’s terse but informative final report had indicated that they had preliminary evidence that the
Odin
was indeed armed with up to four coilgun-based cannons concealed as part of the main mass-beam drive system, and thus was virtually certainly the cause of the apparent meteor strike that had temporarily disabled the Ceres base and almost killed Joe Buckley.

She had also stated that they were going to be able to obtain proof during the Oberth maneuver. From the specific way the former secret agent phrased her report, he suspected they were planning some actions which he, as Director, would be better of not being aware of since he would be then required to advise against it, but he couldn’t be sure. Still, he trusted…
had
trusted…Madeline Fathom (Buckley) to take no unnecessary risks four hundred million miles from home.

And in the normal course of things, he
still
would have at least known what
happened
. While professional astronomical instruments, both land and space-based, had more important things to do, WASTA would have been focused on the most exciting space travel event in history. The World Amateur Space Telescope Array had been a project started shortly after
Meru
, the Indian space elevator, had become fully operational, to deploy an inexpensive array of optical telescopes which would be able to be synchronized and controlled from the ground for amateur astronomers to use. It had been an ambitious and ultimately surprisingly successful project, with its multiplicity of smaller aperture space telescopes sometimes nearly matching the performance of some of the professional telescope arrays.

A Disobedient Girl by Ru Freeman
Hellfire Crusade by Don Pendleton
The Weight by Andrew Vachss
Bonner Incident by Thomas A Watson, Michael L Rider
Seducing the Fireman (Risky Business) by Jennifer Bonds
Silverblind (Ironskin) by Tina Connolly
Illicit Canvas: political romance and stand alone romance by Mazurkiewicz, Joanna
Diary of an Expat in Singapore by Jennifer Gargiulo
When I Lie With You by Sandi Lynn
Paradox (Travelers Series Book 2) by Lefeve, Claudia
Our partner