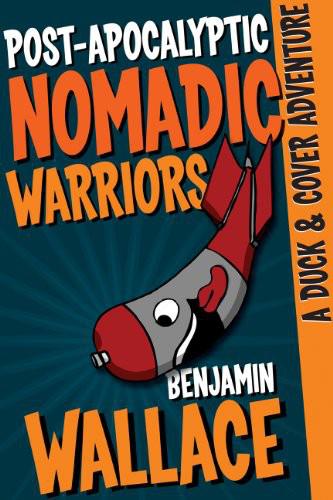 A Duck and Cover Adventure

This is a work of fiction. Names, characters, places, and incidents are the product of the author’s imagination. Any resemblance to actual persons, living or dead, events, or locales is entirely coincidental and, frankly, kind of embarrassing for you. Especially if you’re anything like Carl.

For my wife and kids.

Even a mushroom cloud has a silver lining.

No one ever sees the good in an apocalypse. And that’s understandable. A lot of bad things happen when the world blows up. But then it’s all crying about the loss of family and the failure of our society, “Waaah, waaah, waah, what have we done?”

Sure, there’s that. But what about the good things brought about by the end of the world? Global warming? It’s no longer a problem. And with no more global warming, there are no more whiny hippies.

True, it’s not all green trees and dead hippies. There are real dangers out there: toxins, disease, big scary bears that have mutated to become bigger and scarier.

But here—here in the walls of your city—lies hope. Look around. You’ve already overcome so much. You’ve beaten the elements. You’ve provided food for an entire community. You’ve managed to live together without killing one another or being annoyed by the stink that most of you are putting off.

And, there in that willingness to turn your nose, not up in the air, but towards your funky smelling brethren, lays hope. Hope that we can rebuild this world. Into a braver world, a saner world—a braver world that’s much more sane.

This is your chance to make the world the way you want it to be. A loving world. A free world.

Are you going to surrender this chance? God, or Russia, or somebody, has seen fit to wipe the slate clean. Now we can apply what we know not to do to make a better world for our children—their children, and their children, and maybe a few generations beyond that.

You’ve already assumed the right to govern yourself, the responsibility to function under a social contract that apparently didn’t mandate bathing.

You are now free men and women. Are you going to let these men that gather at your gates take that from you? Just because they’re stronger? Just because they have an army of merciless killers? Just because they armed that army with chains and blades? And harnessed the power of the mighty and noble buffalo and turned them against you as the menacing war bison? Are you? Or do you accept this responsibility, this glorious burden, to wrestle from these ashes of mankind a better kind of man?

Stand. Stand against this threat. Stand with your heads held high—for you are the true possessors of this world’s future. Stand proud. And I will stand with you.

This is our world to rebuild. Not theirs. Ours. So, let’s not fuck it up.

Jimmy Edwards had touched his first breast in the big steel barn that stood in the middle of the North Texas prairie. It was a girl’s breast; it had belonged to Susan Gilmore, and the contact had been purely accidental.

The two had been playing tag at a birthday party. Jimmy was it and Susan ducked into the barn with the boy close behind her. Giggling as she ran, she tried to decide if she was going to let the boy catch her. She thought he was cute, so her plan was to pretend to let the boy corner her and, maybe, just maybe, let him tag her a couple of times here and there.

Her plan had not accounted for the wasp. As she rounded the corner into the barn, it buzzed so close to her face that she would swear she could feel the air from its wings on her nose.

Squealing, she turned to run away from the yellow and black threat.

Jimmy, his arms outstretched, was not prepared for her sudden turn. His young hand filled with boob. A brief moment of realization overcame him and he smiled just before his head collided with Susan Gilmore’s face, bloodied her nose, and knocked her to the cement floor of the big steel barn.

Apologies spewed from his lips as he tried to help her up, but Susan Gilmore had decided that she didn’t like Jimmy anymore and she slapped away his hand. Gripping her nose and tilting her head back, she ran off to find her mom.

Jimmy stared at his hand in amazement. He vowed never to wash it again.

Through sputtering gasps, Susan told her mother about the wasp and the collision that had bloodied her nose, probably ruined her looks, and threatened her future social life.

Jimmy found his friends and told them about the boob.

For many years the boob touching and nose breaking were the most noteworthy thing to ever happen in the big steel barn. Then the world blew up.

After the apocalypse, the barn transitioned from a mythical location that had grown infamous through playground lore into the administration building of the town of New Hope.

Weddings, baptisms, elections, chili contests, and more soon trumped the tag incident as the most important event to occur in the building.

A democracy had been formed in its now sacred walls; a constitution was written and ratified. This social contract between three dozen citizens had been put into print, signed, framed, and hung on the wall conveniently covering a verse of Sharpie scrawled graffiti that read, “Jim was it, grabbed a tit, Susan threw a big fit.”

From that day on, all town business was conducted in the big steel barn.

“Nomad,” the man said to himself as he scratched at a piece of paper with the nub of a pencil.

Roy Tinner was a balding man and refused to admit it. He sat on the town council and had volunteered long ago to interview any visitors that may wander into the gates of his fair town. Though small in stature, and more than a little heavyset, he viewed himself as the first and best line of defense the town of New Hope had against the threat of immigrants, idiots, and those that happened to be both.

“But, that’s not it. It’s post-apocalyptic nomadic warrior.”

Roy looked up from the handwritten form. “Look. You can’t have a time reference in your vocation.”

“Who does that? No one does that. Farmers don’t call themselves pre-winter harvesters. There’s no point. A farmer is a farmer whenever he’s a farmer. Same with a nomadic warrior or … whatever.”

“But, I chose to be a post-apocalyptic nomadic warrior. And, in doing so, have mastered the skills necessary to survive the mutants, toxins, gangs, and other dangers in the wasteland. I can survive in the Great Western Wastes, the Poisoned Pacific Northwest, or Detroit.

“I have studied weaponology, mechanics, electronics, and engineering. I can weld and shoot straighter than most any man.

“I have studied psychology, strategy, and Dale Carnegie.

“It’s for all of these reasons and more that I ask you to, please, list my occupation as post-apocalyptic nomadic warrior.”

The apocalypse had bred a tremendous amount of weirdoes and Roy Tinner had met his fair share. Many had genuinely gone crazy dealing with the devastation and loss of family and friends. Others had seen the world-ending event as a chance to start over, redefined themselves, and created a life they could never have achieved in a civilized society.