Read Postcards From the Edge Online

Postcards From the Edge 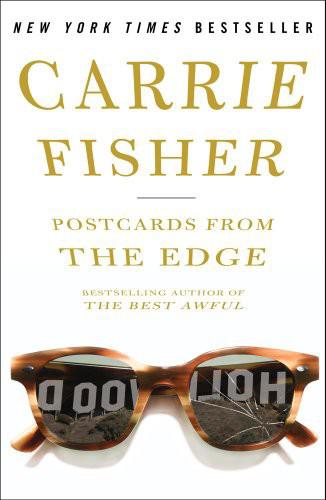 and famous, a thirty-ish actress

w,ho has crash-landed in rehab, and navigated the humorous and harrowing byways of all of her addictions…even love. Tough yet fragile, she’s hanging on-and she’s not sure why. There is her unsupporting cast of friends and lovers: Alex, an arrogantly handsome TV writer. Suzanne has a place in his heart …and maybe even in his new script. Jack, a producer and super-stud. His relationship with Suzanne is heavy on analysis and light on commitment. Lucy, her trusted gal pal. When the going gets rough, they charge away their blues on Rodeo Drive. Jesse, a novelist and the almost-too-good-to-be-true result of a “dating accident.” His Niceness is boring Suzanne to death-and driving her crazy with love.

Poignant, painful, excruciatingly funny, Carrie Fisher’s bestseller is a dazzling survivor’s tale, and “a wickedly shrewd, black-humor riff on the horrors of rehab and the hollows of Hollywood life” (People).

CARRIE FISHER is a screen actor renowned for her roles in films including The Star Wars trilogy, Hannah and Her Sisters, and When Harry Met Sally…. she is the bestselling author of the novels Delusions of Grandma, Surrender The Pink, and Postcards from the Edge, which she also adapted for the

“At once harrowing and hilarious.” -The New York Times

“The sort of novel that makes you want to call your friends to read passages out loud.” -Women’s Wear Daily

“A single woman’s answer to Nora Ephron’s Heartburn, a less-sexual version of Erica Jong’s Fear of Flying, the smart successor to Joan Didion’s Play It as It Lays. ” -Los Angeles Times

“Postcards from the Edge percolates with a wry sense of self-deprecating humor that keeps Suzanne and the reader moving in the right direction…. An entertaining, thoughtful novel about insecurities not found exclusively in Hollywood.” -Nashville Tennessean

“Carrie Fisher has a unique and startling voice…. A born writer! She is seriously funny.” -Mike Nichols

“Carrie gives her protagonist the kind of humor born of pain, anger, and a strong will to live. The narrative voice is a bit like Holden Caulfield… .” -Time

“Fisher shows us the true plight of the mateless, smart, and neurotic character, familiar to us from Cynthia Heimel or Woody Allen; we also find the hip despair of Jay McInerney or Bret Easton Ellis, in this case a good-natured kind…. Postcards from the Edge is fun.” -Newsday

“With surprising literary artistry, Carrie Fisher swims through relationship-infested waters, braves cocaine blizzards, glitz spills, sushi tsunami, and bon-mot attacks to show us what despair is like when it refuses to take itself seriously” -Tom Robbins

“Surprising, hilarious, breathtaking, a wry and witty commentary on life in the fast lanes of Freewayland.” -San Jose Mercury News

For my mother and my brother

A BANQUET OF CRUMBS

DREAMING OUTSIDE YOUR HEAD

You know how I always seem to be struggling, even when the situation doesn’t call for it? Well, I finally found a place where my struggling fits right in: the sunny Middle East. Brooding and moping doesn’t seem overdramatic in Israel or Egypt or Turkey. Today I stood in a recently bombed-out train station. I looked at the charred, twisted metal and I thought, “Finally my outsides match my insides.” Maybe I should take a tour of the world’s trouble spots and really relax. See you soon.

Okay, here’s what I think now. Ready? I have to establish an overall plan for my overboard life. When I cross the finish line of my twenties this fall and that thirty flag goes down, I’d like to be closing in on having some idea of whatever it is that my life is about.

Here’s what I’ve come up with so far: a) I’ll get back into therapy, maybe with a woman therapist this time; b) I’ll stop coloring my hair and dye it back to its normal color-I’ll artificially go natural; c) I’ll only date people I really like, so I can feel like there’s some point to it; d) I’ll fix the eating thing; e) I’m going to slip my hand out of the comforting clasp of chemicals-No More Drugs. Also, get up early every day, read more, keep a journal, talk on the phone less, do less shopping and, eventually, have a child with someone. Obviously, the plan is in a really rough early phase, so I’ll keep you posted as this gets honed down.

Yet another offering to add to your collection of my poetic works.

I’ve made a mess I feel a fool

When we get to the good part Will I have something to wear?

I act so much like myself It’s a little unreal

It’s a lot of work It’s no big deal

POSTCARDS from the EDGE

But I’m halfway there

You can tell from the smoke Rising from my molten hair

Have a nice day

Give Granpaw a kiss if he remembers me. This is the kind of vacation I might need a vacation after. I’ll call you when I get home.

Maybe I shouldn’t have given the guy who pumped my stomach my phone number, but who cares? My life is over anyway. Besides, what was I supposed to do? He came up to my room and gave me that dumb stuffed animal that looks like a thumb, and there I was lying in bed twelve hours after an overdose. I wasn’t feeling my most attractive. I’d thrown up scallops and Percodan on him the night before in the emergency room. I thought that it would be impolite to refuse to give him my number. He probably won’t call, anyway. No one will ever call me again.

I was up all night with my head full of frightening, chattering thoughts, walking around and around the halls. After about the sixth spin I stopped waving at the night nurse and just kept my head down.

One of the therapists came in to admit me and asked how long I’d been a drug addict. I said that I didn’t think I was a drug addict because I didn’t take any one drug. “Then you’re a drugs addict,” she said. She asked if I had deliberately tried to kill myself. I was insulted by the question. I guess when you find yourself having overdosed, it’s a good indicator that your life isn’t working. Still, it wasn’t like I’d planned it. I’m not suicidal. My behavior might be, but I’m certainly not. Tomorrow I get out of detox and start group.

I hate my life.

All of the therapists here seem to be former addicts. They have this air of expertise. Drug addicts without drugs are experts on not doing drugs. I talked to this girl Irene at lunch who’s been here two weeks, and she said that in the beginning your main activity is a nonactivity in that you simply don’t do drugs. That’s what we’re all doing here: Not Drugs.

The woman who admitted me, Julie, is my therapist. I don’t know if I like her or not, but I want to like her. I have to like her, because the way she is is probably the way I’m going to be. I need to make an ideal of someone who did drugs and now doesn’t.

Three people here-Carl, Sam, and Irene-have been to prison. We also have Sid, a magazine editor, and Carol, an agent’s wife, and several others whose names I’m not sure of yet. Most of them are here for cocaine or freebase, but there’s also a sizable opiate contingent. The cocaine people sleep all the time, because by the time they get here, they haven’t slept in weeks. We opiates have been sleeping a lot, so now we roam the halls at night, twitching through our withdrawals. I think there should be ball teams: the Opiates vs. the Amphetamines. The Opiates scratch and do hand signals and nod out, and the Amphetamines run around the bases and scream. There are no real rules to the game, but there are plenty of players.

POSTCARDS from the EDGE

Tomorrow afternoon after the cocaine video, the nurse takes everyone who’s not in detox on a Sunday outing to the park.

Carl and I shared a blanket in the park. He’s a fifty-five-yearold black grounds keeper and a would-be ex-free-base addict. He looks like a burnt mosquito. I asked him how he could afford to be here and he said he’s on his wife’s health insurance.

Carl talked so much in the park that I thought I was going to kill myself. His main topic, of all things, was drugs. He talked about cooking up the rock and the feel of the freebase pipe, and how he’d make enough money from Tuesday to Friday to freebase all weekend. I asked him what he took to come down, and he said he didn’t like downers. He said, “Shoot, those drugs don’t do nothin’ but constipate me.”

The fat guy Sid seems really smart. He’s in for lodes. I asked him what lodes were and his eyes started to shine. When addicts talk about their drug of choice, it’s almost transcendental. He said, “You’ve been a downer freak and you don’t know what lodes are?” It turns out lodes are four strong painkillers combined with one weird sleeping pill, which produces an effect like heroin along with a stomach addiction, which Sid had. I can’t believe I missed that drug.

The weird thing about all this is that I had been straight for months-the whole time I was filming Sleight of Head in London and all through my vacation. But then I got home and BOOM! four weeks of drugs. I hated it, I even wanted to stop, but I just couldn’t. It was like I was a car, and a maniac had gotten.behind the wheel. I was driven, and I didn’t know who was driving.

I let Irene cut my hair today. It’s kind of horrible. She’s only twenty, and her skin is all broken out from PCP and heroin. I got so absorbed listening to her stories of blackouts and arrests for prostitution that I didn’t notice how badly the haircut was actually going.

Julie is so cheerful I want to punch her. And two guys who get out of here next week, Roger and Colin, almost swagger. They’ve got it all over us, because they haven’t done drugs in almost a month. They really know how to not do drugs now. Big fish in a little rehab.

I feel so agitated all the time, like a hamster in search of a wheel. I’m consumed with panic that everyone will find out about this and hate me, or laugh at me, or worst of all, feel sorry for me. Pity me for taking my Everything-That-a-Human-CanPossibly-Be-Offered and turning it into scallops and Percodan on the emergency room floor.

The Husband's Story by Norman Collins
A Reunion to Die For (A Joshua Thornton Mystery) by Lauren Carr
Haunted by Heather Graham
Training Rain by A. S. Fenichel
Wine of the Gods 08: Dark Lady by Pam Uphoff
The Tomni'Tai Scroll (Book 1) by Sam Ferguson
Samantha's Gift by Valerie Hansen
Sparkle: The Queerest Book You'll Ever Love by Rosen, Rob
One Day in the Life of Ivan Denisovich by Alexander Solzhenitsyn
Wizard's Education (Book 2) by James Eggebeen
Our partner